JONATHAN MCEVOY: Lewis Hamilton’s life was saved by the halo device.. Max Verstappen’s Red Bull would have run right over his head but for the safety cage in which he sat

By Jonathan Mcevoy For Mailonine

Lewis Hamilton and Max Verstappen crashed into each other and out of the Italian Grand Prix – with the Briton’s life saved by the halo device.

The seven-time world champion sat motionless in his car, perhaps digesting the fact that the Red Bull would have run right over his head but for the safety cage in which he sat.

The title rivals did not exchange a word as they each climbed out of their cars, Verstappen first and Hamilton a few worrying minutes later. 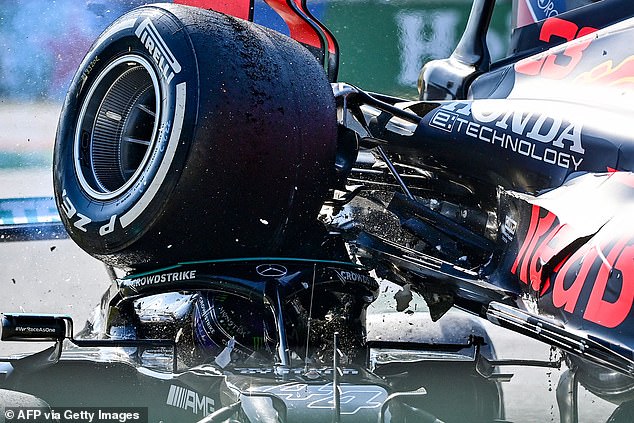 The smash came on lap 26 of 53 while they were fighting for net third around the pit stops. Verstappen was left with no room on the inside at the first chicane, refused to back out, and was launched by the kerbs over the Mercedes and they both ended up motionless in the gravel, Hamilton’s Mercedes under his adversary’s machine.

They had been pitched together by Mercedes’ slow stop. So the champion emerged from the pit as Verstappen was approaching. They went close down the straight and then tussled through the chicane, Variante del Retifillo – and bang!

‘That’s what happens when you don’t leave any room,’ said Verstappen over the radio. 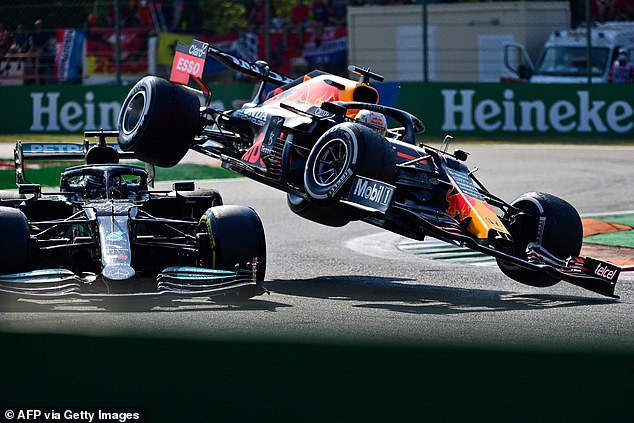 It was the pair’s second major collision of the season, after their high-speed crash at Silverstone in July.

The upshot is that Verstappen leads the standings by five points with eight races remaining, as he did at the start of the dramatic day.

The two men walked back to the paddock separately and await an investigation by the stewards that was due to commence at the end of the race.

Daniel Ricciardo won for McLaren, the Woking-based team’s first triumph since Jenson Button’s success in Brazil in 2012. Their joy was maximised with Lando Norris in second place, the Brit’s highest finish. Valtteri Bottas was third for Mercedes.