Gladys Berejiklian has fired up at reporters who repeatedly asked why she plans to ditch daily Covid press conferences, claiming she ‘needs a clear head’.

The NSW premier announced last week that Sunday would be her last daily coronavirus report in an effort to normalise living with the virus.

The state-wide lockdown is set to end completely when NSW hits 70 per cent double-dosed vaccinations, with a set target of October 18.

When asked whether NSW would be open in time for Christmas, the premier said: ‘Absolutely.’

‘I would like to think that by Christmas, not only will we be welcoming home more Australians, thousands every week from overseas to reunite for Christmas, but also that we don’t have these internal state borders,’ she said.

‘It is only a matter of time before Delta becomes part of every state, every state’s experience.’ 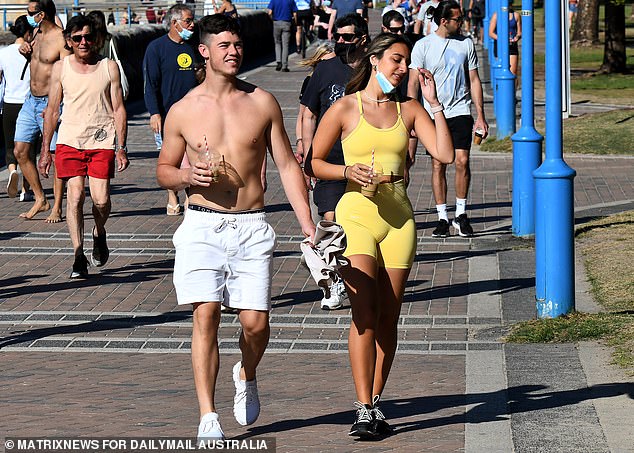 The state-wide lockdown is set to end completely when NSW hits 70 per cent double-dosed vaccinations, with a target set of October 18. Pictured: Coogee Beach on Sunday morning

At an 80 per cent vaccination rate, domestic travel will be allowed for the fully-vaccinated. Pictured: People at Bronte Beach on Sunday

‘I predict that New South Wales and Victoria will work more closely about these matters moving forward. And if you look at the way, the way that things have been tracking, there is no doubt Victoria New South Wales will be in similar positions in relation to being able to welcome home Australians.’

Despite the increasing vaccination rates, Ms Berejiklian said there are still areas of concern in Sydney and regional NSW with increasing case numbers.

‘The virus is picking up pace at the moment are a couple of suburbs in south-western Sydney … as well as some suburbs in the inner Sydney and in a western areas,’ she said.

‘We have got three Pfizer vaccines now available at various locations including at Ashfield Leagues, Green Square Library at Zetland, the Morris EMR Indoor Sports Centre at Riverwood, Club Burwood, and the National Centre for Indigenous Education at Redfern,’ she said. 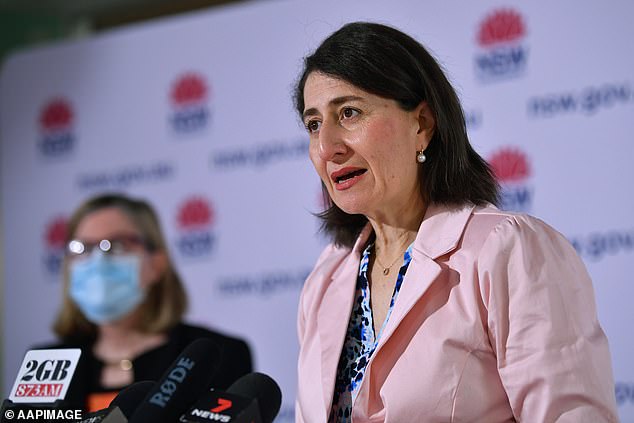 ‘We can’t be complacent anywhere. We are seeing case numbers increasing in Central Coast and Illawarra,’ she warned.

Dr Chant urged anyone in those areas with even the mildest symptoms to present for testing.

Among the fatalities was a man in his 20s from western Sydney who had severe underlying health conditions and was unvaccinated.

There were also 1,206 people admitted to hospital, overnight on Sunday, with 220 in intensive care and 92 on ventilation.

Ms Berejiklian and Dr Chant have continually warned residents that case numbers will likely peak in October, when projections suggest the state will reach the 70 per cent milestone.

When that target is achieved, double-jabbed Sydneysiders will be allowed to visit pubs, clubs, gigs, restaurants and non-essential retail, go back to the gym and get a haircut.

When asked whether areas with low vaccination rates would remain under restrictions, Dr Chant said she is focussed on seeing a ‘sustained decline’.

‘At the moment, we have too many bushfires going,’ she said.

‘I’ve indicated a number of areas where I’ve got concerns about the fact that we’ve got cases increasing in the Central Coast, Wollongong.

‘I’m very confident that those local health districts will work in partnership with a variety of people to do all they can to suppress those case numbers.’

She also believes the state will be able to reach 90 per cent single-dose vaccinations.

‘I want to see 80 per cent first dose next week, and I am confident we will get there around Tuesday or Wednesday,’ she said.

‘And then my challenge to the New South Wales community is, it’s get to 90 per cent the following week.

In response to a question about the disturbing scenes on Sydney beaches on Saturday when people flocked to the sand amid high temperatures, Ms Berejiklian acknowledged the situation was ‘challenging’.

‘We know that people are tired after the enormous things we’ve been asking of them that we must stay the course … don’t start getting complacent now,’ she said.

‘We know the weather adds to our positivity and what we can look forward to in October.’

Ms Berejiklian also became visibly frustrated with a number of questions asking why she decided to pull the plug on daily conferences.

‘Gosh, I should all be privy to the conversations we all had about the 11am press conferences,’ she said.

‘The next two months will be the most challenging our state has seen perhaps ever, and I need to make sure we are not only making decisions for the next day but for the next week and next month.’ 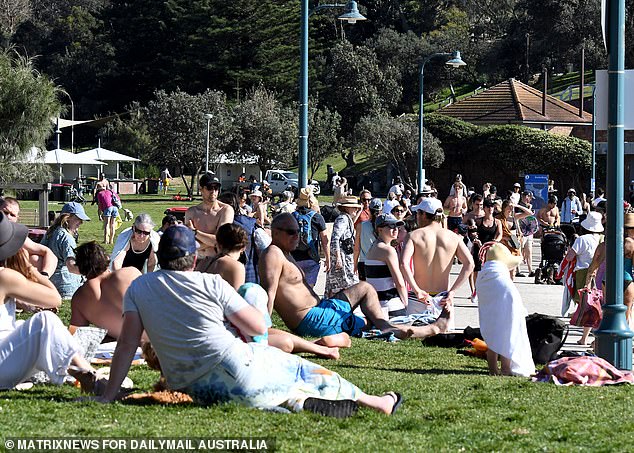 Grade cricket traditionally begins in Sydney in mid-September, while tennis, soccer and touch football are among other codes played in the springtime. Pictured: Bronte Beach on Sunday

Social distancing rules will however apply at indoor locations, with one person allowed per four square metres.

At an 80 per cent vaccination rate, domestic travel will be allowed for the fully-vaccinated.

The timeline relies on the jab rate maintaining its impressively high levels, something that hasn’t occurred in many other parts of the world, with rates consistently stalling overseas around the 60 per cent mark.

On Saturday, Health Minister Brad Hazzard said ‘it’s possible’ people may be allowed to play group sports like cricket, touch football and tennis, and more than five people could dine together outside if vaccination rates remain steady.

‘I think give us another few weeks and see how we go with the vaccinations, and I’m fairly confident that we’ll be able to move in that area,’ he told reporters.

Grade cricket traditionally begins in Sydney in mid-September, while tennis, soccer and touch football are among other codes played in the springtime.

Surfing, fishing, cycling, bushwalking and camping are also among the popular outdoor activities Sydneysiders could be allowed to do in groups outside of their local government areas or 5km radius.

Mr Hazzard was unfazed on Saturday as images of worn-down Sydneysiders flocking to the city’s beaches on a 29 degree day in their thousands appeared on social media, stating that ‘fresh air, we know, is the safest place to be at the present time’.

Noticeably NSW Police did not throw the book of extensive lockdown rules at beachgoers who were lax in social distancing, wearing masks or gathering only in pairs, although the force did try to enforce the 5km travel rule.

The scenes however did anger those living in the 12 Sydney LGAs who are currently not permitted any ‘recreational’ sunbathing time outdoors, who claimed the ‘selfish’ behaviour was a slap in the face for those told to stay inside their homes for 22 hours a day.

From Monday September 13 up to five fully-vaccinated adults will be allowed to gather outdoors for recreation and leisure activities, such as picnics, in areas across greater Sydney.

At the weekend press conference Mr Hazzard was quizzed if he’d support picnics being expanded to allow 10 people to gather together instead of five.

He replied that the government needs to look at ‘what other normality we can bring back into our lives’.

‘I’m totally supportive of that, if I could just get some time to work with the team I would be doing it.’

The extra incentives will only become a reality if vaccination rates remain strong.

Arrival caps cut in half to 3,035 a week until August 31; lockdowns and state border closures as a last resort; trials of seven-day home quarantine for vaccinated arrivals; medicare vaccination certificates available on apps like apple wallet

2. Post vaccination phase (when an as-yet unannounced percentage of Aussies are jabbed, expected early next year)

Lifting all restrictions for outbound travel for vaccinated travellers; no caps for vaccinated arrivals; vaccinated people exempted from domestic restrictions; increased caps for students and visa holders; more travel bubbles being set up with countries such as Singapore; booster shots rolled out