Emma Raducanu has revealed her retirement in the fourth round of Wimbledon earlier this summer made her ‘hungry’ to pull off one of the great sporting feats with victory at the US Open.

The 18-year-old achieved what was an unprecedented feat in New York, winning 10 matches at the tournament after coming through qualifying, all of them in straight sets, to take home the main prize.

Raducanu’s 6-4 6-3 victory over fellow teenager Leylah Fernandez in the final made her the first British woman since Virginia Wade, who was watching from the stands, 44 years ago to win a slam singles title, and the first at Flushing Meadows since Wade in 1968. 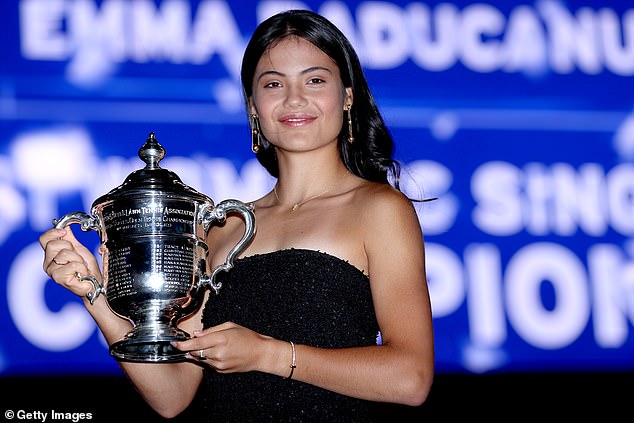 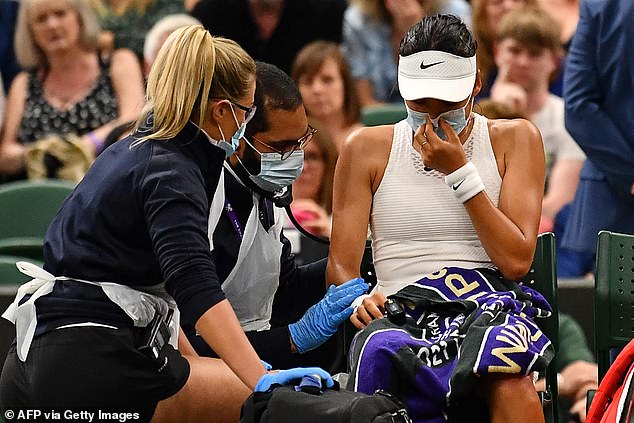 It has come just a few months after she suffered breathing difficulties during her match against Ajla Tomljanovic at the All England Club, after which she admitted ‘I think the whole experience caught up with me.’

Much was made of Raducanu’s unfortunate retirement at Wimbledon but the teenager quickly insists she quickly put it behind her and used it as a springboard to increase her ‘hunger’ and achieve this incredible feat.

She worked hard on being physically strong enough to compete at the top level and, through a series of matches first at lower-tier events and then at Flushing Meadows, made leaps forward with each one.

She said: ‘At the beginning of the grass courts, I was coming fresh off my exams. I had three weeks to practise before my first tournament. I just built up every single match, every single win. 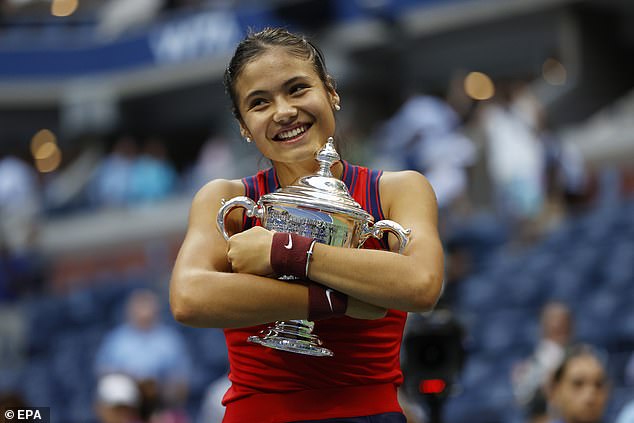 ‘I thought Wimbledon was such an incredible experience. Fourth round, second week, I couldn’t believe it. I thought, ‘What a great achievement’.

‘But I was still hungry. I was working hard after the grass. I didn’t have much time off. With each match and tournament, I think I’ve really built in terms of confidence, in terms of my game, in terms of my ball striking. Everything came together today.

‘I think to pull off some of the shots I did in the big moments when I really needed it was just an accumulation of everything I’ve learnt in the past five weeks.’

The teenager’s extraordinary talent was evident from an early age too and her showing at Wimbledon this summer nevertheless demonstrated that a big future lay ahead.

‘I first started when I was a little girl but I think the biggest thing that you have visions of, for me it was just winning, the winning moment, and going to celebrate with your team in the box. That’s been playing in my head a couple of nights. I’ve fallen asleep to that.’ 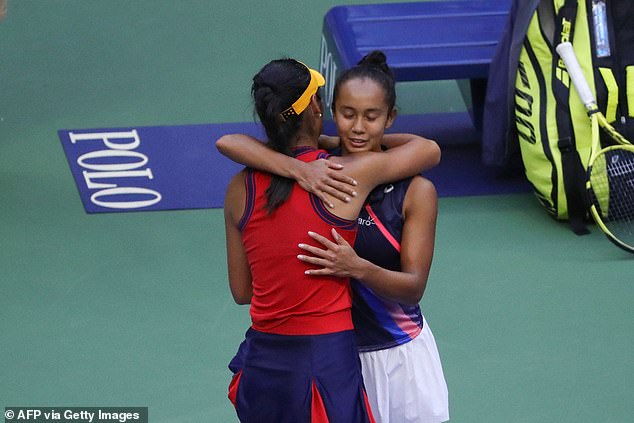 Her team includes her parents, Ian and Renee, who were forced to watch their daughter on TV because of the continuing difficulties of international travel.

Yet one of Raducanu’s proudest achievements was impressing her dad, who has been the driving force behind the scenes.

She said: ‘I would have loved them to be here, and we can all celebrate together where they could be with me and experience the same things. But they’re watching from home very proud.

‘My dad, he said to me, ‘You’re even better than your dad thought’, so that was reassurance. Tinie Tempah reference there. My dad is definitely very tough to please. But I managed to today.’

Raducanu’s run has been marked by an almost preternatural calmness, which included shutting out the excitement and hype her achievements have generated back home.

The teenager has been inundated with congratulatory messages, including from the Queen, but she said: ‘I still haven’t checked my phone. 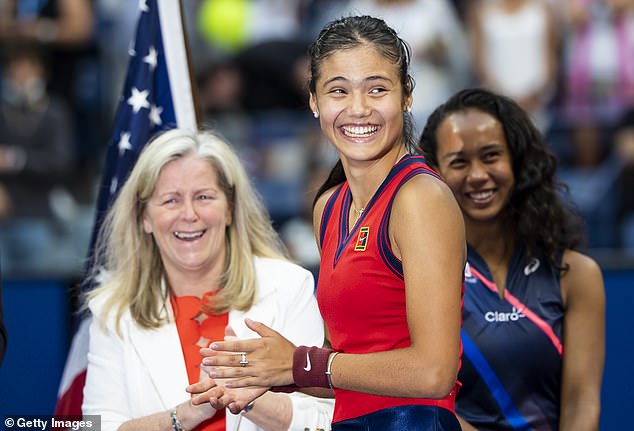 ‘I have absolutely no idea what’s going on outside of the little world that we’re in here. We’ve just been in the quiet room, just enjoying the moment, taking it all in. I think today we just really need to shut out from everything, just enjoy it as a team, because it was a team effort.

‘I have no idea when I’m going home. I have no idea what I’m doing tomorrow. I definitely think it’s the time to just switch off from any future thoughts or any plans, any schedule. I’ve got absolutely no clue. Right now, no care in the world, I’m just loving life.’

This was the first all-teenage final this millennium, with Canadian Fernandez having pulled off a giant-killing run including victories over two former champions in Naomi Osaka and Angelique Kerber and top-five seeds Elina Svitolina and Aryna Sabalenka.

The 19-year-old looked the more nervous of the two initially and Raducanu surged into a 2-0 lead but Fernandez pegged her straight back and it was nip and tuck all through a brilliant first set until the 10th game.

The biggest difference between the two was perhaps Raducanu’s exceptional returning, and she piled on the pressure before taking her fourth set point with a forehand winner down the line, raising her arms aloft and letting out a huge ‘Come on’. 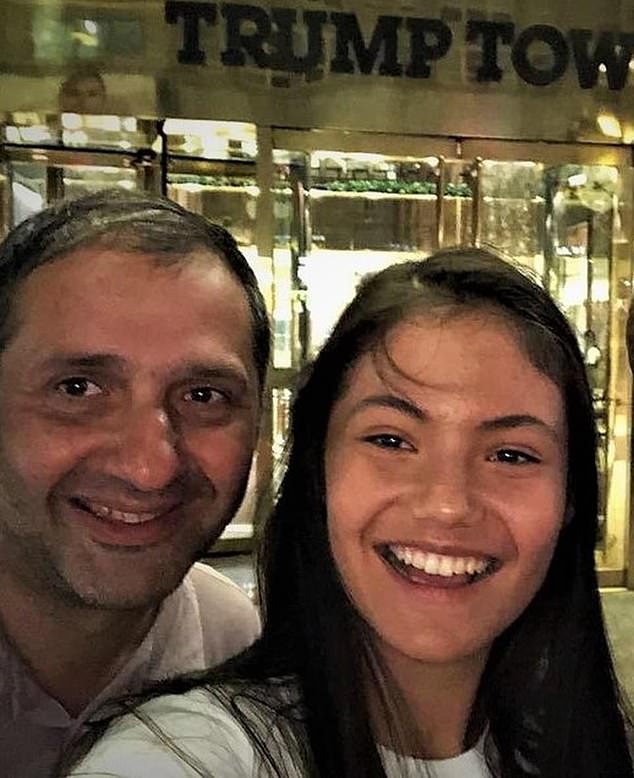 Raducanu said her father Ian (left) is definitely very tough to please, but that she managed to today

Four games in a row for Raducanu from an early break down in the second set took her to the brink of victory but Fernandez is a tenacious competitor and she saved two match points at 5-2 to force her opponent to try to serve it out.

The unsuccessful efforts of trying to prevent a break point resulted in Raducanu cutting her leg, requiring a medical timeout at the most inopportune of moments.

Fernandez was furious but Raducanu composed herself, saved two break points and clinched victory in fittingly clinical style with an ace.

Of the medical timeout, the teenager said: ‘I didn’t actually want to stop because I thought it would disrupt my rhythm.

‘But I couldn’t play on. I wasn’t allowed to because my knee was gushing with blood. I guess I just went over and was really trying to think what my patterns of play were going to be, what I was going to try to execute. 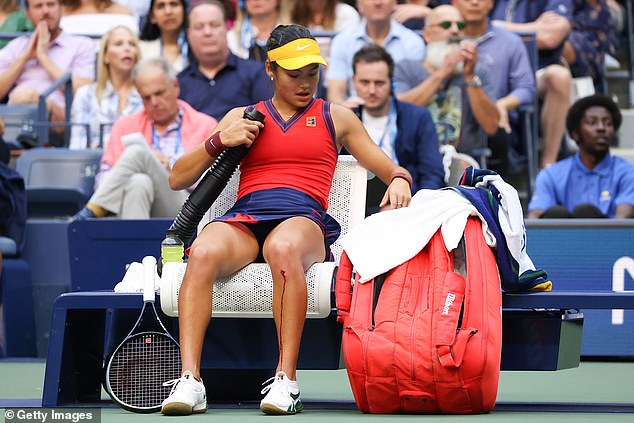 Raducanu cut her leg, requiring a medical timeout at the most inopportune of moments

‘Going out there facing a break point after a two or three-minute disruption isn’t easy. I think I managed to really pull off the clutch plays when I needed to.’

She has gone overnight from a rank outsider to one of the top names in the game but she swatted away any talk of pressure.

‘I don’t feel absolutely any pressure,’ she said. ‘I’m still only 18 years old. I’m just having a free swing at anything that comes my way. That’s how I faced every match here in the States. It got me this trophy, so I don’t think I should change anything.’

Fernandez fought back tears on the podium but was widely praised for using the moment to commend the resilience of New Yorkers on the 20th anniversary of the September 11 attacks.

The 19-year-old admitted defeat stung, saying: ‘I think this loss, I’m going to carry it for a very long time. I think it will motivate me to do better in training, better for the next opportunity I get.

‘But I’m very happy with myself, with the way I competed, and the play I played, the way I acted on court the past two weeks. I’ve improved a lot not only tennis wise but emotionally and mentally.

‘Emma is a very good player. She’s been playing incredibly these last few months with a lot of confidence. I unfortunately today did one too many mistakes. Hopefully we’ll have many more tournaments together and many more finals.’