Charging points for electric cars will be preset to turn off for nine hours a day amid fears they could cause blackouts with the government pushing the switch from diesel and petrol.

From May, every new charger will automatically not function at ‘peak times’ to ease the pressure on the national grid.

There is also set to be a ‘randomised delay’ of up to 30 minutes if there is high demand from motorists.

Transport Secretary Grant Shapps is said to be anxious that huge numbers of drivers will plug in their car when they return home between 5pm and 7pm.

Motoring experts said the measure would be a ‘nudge’ for drivers to consider charging vehicles during off-peak hours.

The government is banning sales of petrol and diesel cars from 2030, to help eliminate greenhouse gas emissions and achieve its net zero emissions target by 2050. 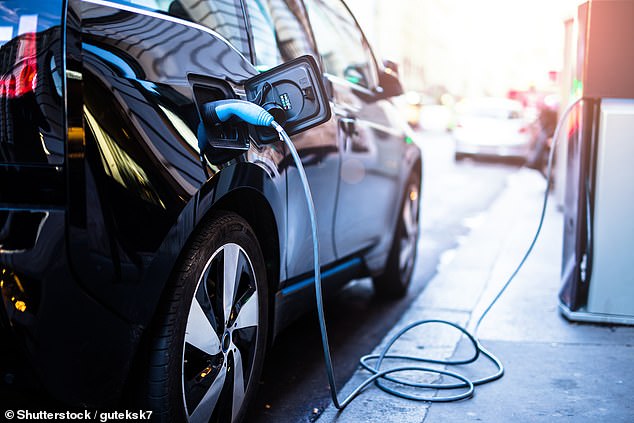 From May, every new charger will automatically not function at ‘peak times’ to ease the pressure on the national grid 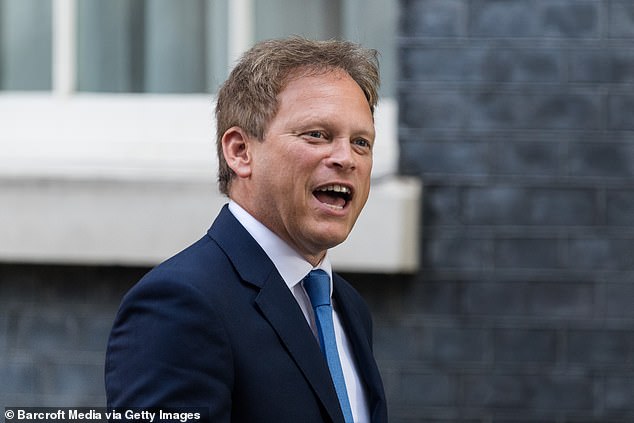 Under regulations lodged with the World Trade Organisation, new chargers in the home and workplace will by default not operate from 8am to 11am and 4pm to 10pm.

Owners will be able to override the preset times, to take account of night workers and people who have different schedules.

Public chargers and rapid chargers, on motorways and A-roads, will be exempt.

The Commons Transport Select Committee called this summer for owners to be incentivised to recharge batteries ‘little but often’ to avoid power shortages.

Electric cars have been forecast to create extra 18GW demand for power in UK at peak times by 2050, according to the National Grid. That is the equivalent of six Hinkley Point nuclear power stations.

However, the actual increase in supply required is likely to be less due to improvements in charging technology, and the 18GW figure is cited as the most ‘extreme’ scenario.

AA president Edmund King, who drives an electric vehicle, told the Sunday Times: ‘Sometimes people need to be nudged to be smart and this nudge will save them money, as power is cheaper off-peak.

‘The reality is that for most EV drivers, with off-street parking, it is more efficient anyway to charge when they sleep. This will help bring cheaper power to electric drivers.’

Last week the government announced laws to ensure electric car chargers are built into all new homes and offices, in a bid to increase the numbers.

Ministers have admitted that only around 500 plug-in points are being installed every month – way below the 700 a day industry bodies say are needed.

Government said last year that it will pump £1.3 billion into scaling-up the rollout of charge points for electric vehicles in homes, streets and motorways across the UK. 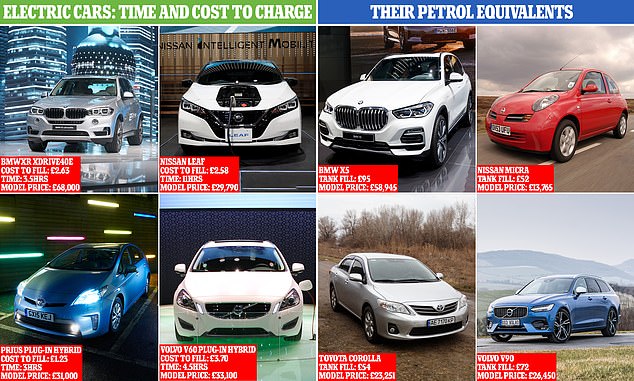 This graphic contrasts the cost of buying and fueling electric cars versus similar cars that run on petrol. The calculations are based on charging the cars with a domestic three-pronged plug at an energy cost of 17.2p/kWh – the UK average for 2020. The petrol cost is 126.9p/litre – the latest average for unleaded petrol, according to the AA

A target set by the government in June 2019 will require the UK to bring all greenhouse gas emissions to net zero by 2050.

Former Prime Minister Theresa May had announced the target, saying the plans were ambitious but crucial for protecting the planet for future generations.

The move will require huge changes such as more renewable electricity generation, phasing out new petrol and diesel cars by at least 2035 and a 20 per cent cut in beef and lamb consumption.

‘The UK kick-started the Industrial Revolution, which was responsible for economic growth across the globe but also for increasing emissions,’ said said Energy and Clean Growth Minister Chris Skidmore at the time.

‘We’re leading the world yet again in becoming the first major economy to pass new laws to reduce emissions to net zero by 2050 while remaining committed to growing the economy – putting clean growth at the heart of our modern Industrial Strategy.’

Net zero means any emissions would be balanced by schemes to offset an equivalent amount of greenhouse gases from the atmosphere, such as planting trees or using technology like carbon capture and storage.