Goldman Sachs urges 6,000 staff to get jabbed and back to their desks as city slackers are blasted for heading to the office three days a week

By Emma Dunkley City Correspondent For The Mail On Sunday

Goldman Sachs has urged its entire 6,000-strong workforce in the UK to return to the office from tomorrow.

An internal memo sent to employees at the US banking giant says they will no longer be required to socially distance and encourages those not yet vaccinated to get jabbed.

‘Seating will return to full occupancy, meaning we will be able to welcome all of our people in the UK back into the office,’ says the memo from Richard Gnodde, chief executive of Goldman Sachs International. 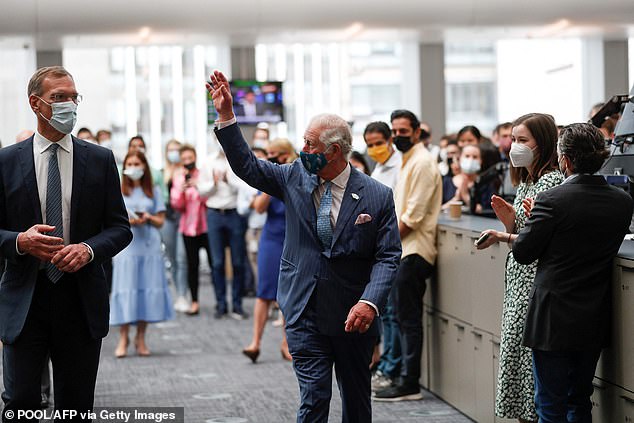 An internal memo sent to employees at the US banking giant says they will no longer be required to socially distance and encourages those not yet vaccinated to get jabbed. Prince Charles is pictured above at Goldman Sachs HQ in London in July

The move will heap pressure on central and local government to do more to get civil servants back to their desks.

Vaccines Minister Nadhim Zahawi last week admitted that just one in four of his civil servants were working from their offices.

It comes as a rift begins to develop between those who favour returning to the office full-time and those opposed. City workers have even coined the term ‘TW*Ts’ for workers who come in to the office only on Tuesdays, Wednesdays and Thursdays.

A poll of 2,000 workers by office expert Orega found 53 per cent wanted to adopt the model of Monday and Friday at home, with the middle of the week in the office.

Sources said Goldman Sachs was among a swathe of investment banks including J P Morgan, Bank of America and Deutsche which have been encouraging staff to be fully vaccinated before returning to the office – although they have stopped short of making it mandatory. 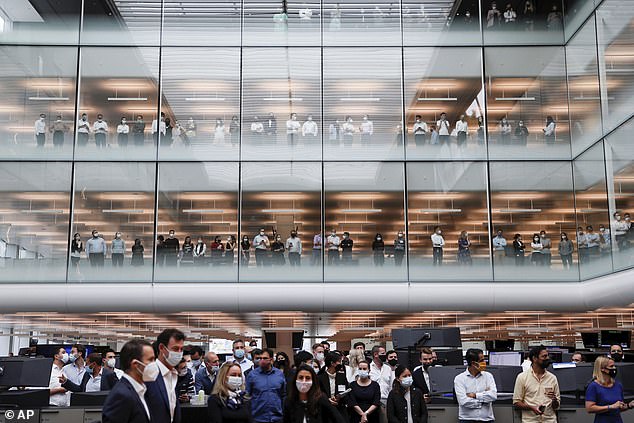 It comes as a rift begins to develop between those who favour returning to the office full-time and those opposed. Workers are pictured above at the HQ in July during the Prince’s visit

In his memo, Mr Gnodde said ‘the vast majority of our people are now fully vaccinated’, adding: ‘It’s been encouraging that we’ve recently seen around half of our London population coming in each day.’

Employers have so far stopped short of requiring vaccines but are increasing pressure on staff to get them. Morrisons said it would cut sick pay for unvaccinated staff who needed to self-isolate.

City firms last week saw a sharp rise in numbers working from offices. Sources said pubs and restaurants were ‘livelier’ and Pret A Manger boss Pano Christou today tells The Mail on Sunday his firm saw a 15 per cent surge in sales.