‘Herschel Walker is a friend, a Patriot, and an outstanding American who is going to be a GREAT United States Senator,’ Trump said, adding that Walker ‘will never let you down.’

About 30 minutes later, however, CNN was out with a new story on a third woman accusing the ex-football star with stalking her, after his ex-wife and an ex-girlfriend said he had threatened them in the past. 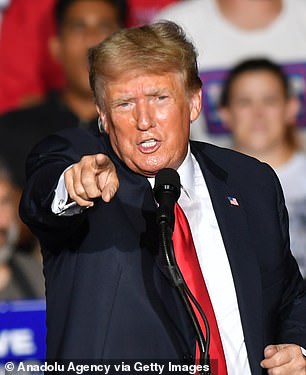 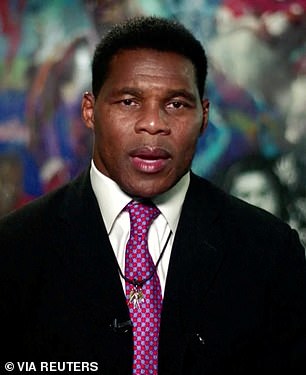 CNN obtained a police report from 2002 that said a Texas woman had told police that Walker threatened and stalked her.

The woman, a friend of Walker’s ex-wife, told law enforcement Walker made ‘threats to her’ and had ‘her house watched.’

The woman confirmed the account to CNN for Thursday’s story, she refused to be identified and also told the network she had never been in a relationship with Walker.

The woman had made a ‘prowler call’ to police, believing someone was ‘sneaking around outside her house,’ but was reluctant to identify the individual. She eventually told an officer that it was Walker, who she had had ‘a confrontation’ with the year before.

The officer, Jason Mullins, wrote that the woman told him Walker ‘began calling her, making threats to her and having her house watched’ after the initial dust-up.

More recently the woman said she ran into Walker at a local resort and he ‘jumped into’ his vehicle and followed her ‘all the way to her house,’ according to the 2002 report.

‘She is very frighten[ed] of the individual and is afraid that he [is] going to begin bothering her again,’ Mullins wrote. ‘She advised that she does not want him contacted under any circumstances as she feels this will only make the problem worse.’

Walker’s ex-wife and an ex-girlfriend told authorities the University of Georgia football star had threatened to kill them over the course of their relationships with him.

A campaign spokeswoman, when asked about the 2002 incident, cited Walker’s past issues with his mental health, which he’s widely publicized.

‘It is sad that many in politics and the media who praised Herschel for his transparency over a decade ago are now making false statements, stereotyping, attacking, and attempting to sensationalize his past just because he is a Republican Senate candidate,’ spokesperson Mallory Blount told CNN.

Walker has said he was diagnosed with dissociative identity disorder and struggled with his mental health during his marriage to Cindy Grossman.

In a 2008 interview with CNN’s Sanjay Gupta, Grossman said Walker held a razor to her throat and ‘he held [a] gun to my temple and said he was going to blow my brains out.’ 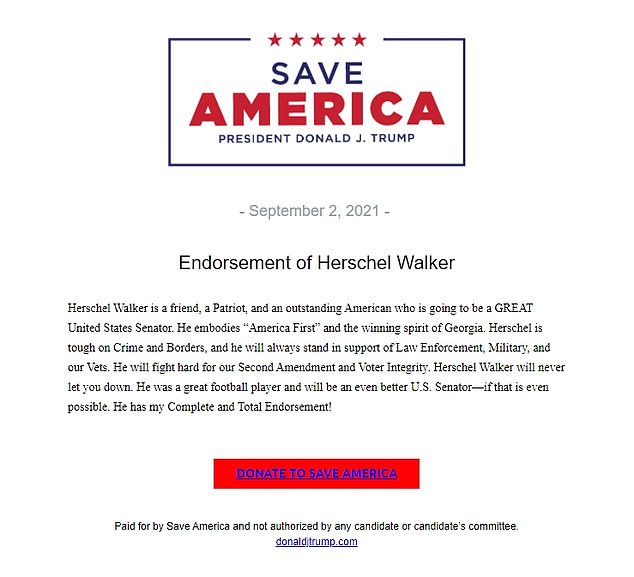 Former President Donald Trump called Walker a ‘friend, a Patriot, and an outstanding American who is going to be a GREAT United States Senator.’ Prior to the endorsement, Trump publicly called on Walker to enter the 2022 Georgia Senate race

Walker said in 2008 that he didn’t remember being violent toward his wife, but didn’t deny his actions, citing blackouts as one of the symptoms of his personality disorder.

The former president didn’t acknowledge the recently resurfaced reports of threats in his Thursday statement.

Instead he said Walker ’embodies “America First” and the winning spirit of Georgia.’

‘Herschel is tough on Crime and Borders, and he will always stand in support of Law Enforcement, Military, and our Vets. He will fight hard for our Second Amendment and Voter Integrity,’ Trump said.

‘He was a great football player and will be an even better U.S. Senator – if that is even possible,’ the former president continued.

‘He has my Complete and Total Endorsement!’ Trump said.

Trump had previously publicly asked Walker to run for the seat, which Republican Sen. Kelly Loeffler lost to Warnock in a January 5 run-off race in the Peach State.

Warnock’s win and that of fellow Georgia Democratic Sen. Jon Ossoff flipped control of the Senate to the Democrats, after Trump lost the White House to Democrat Joe Biden in the November 2020 election.