An open letter penned to Sydney residents in lockdown explains why we should consider ourselves privileged to be living in Australia – even during the Covid-19 pandemic.

Mark Owen, the author of the touching piece, explained how his grandparents fled Nazi-occupied Europe, and how Afghani refugees would not complain about being in our current predicament.

Michelle Barel shared the letter to Facebook on Wednesday, with the caption: ‘Despite the lockdown in Sydney we should all be grateful to live in Australia, this lucky country’. 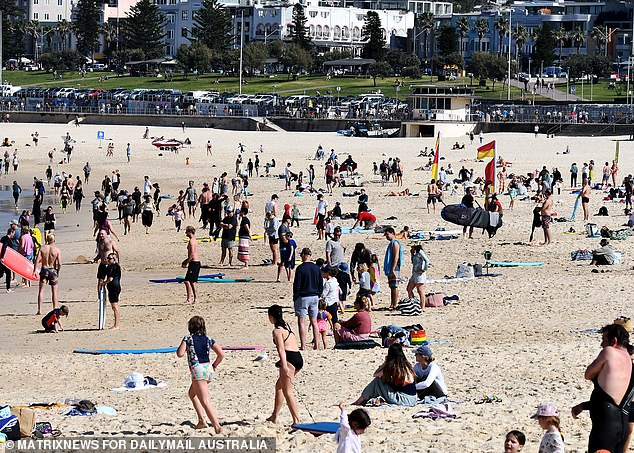 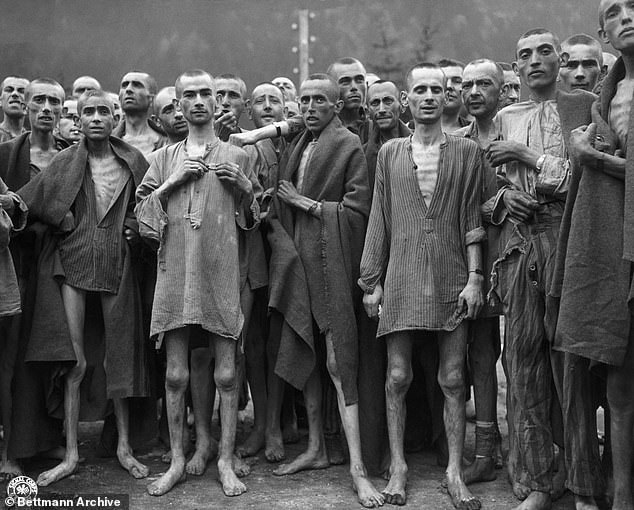 Mark Owen, in an open letter has compared Sydney’s current lockdown struggles to that of his grandparents in Nazi-occupied Europe

Mr Owen begins by explaining how an episode of Seinfeld came to his mind while thinking about the minority who oppose our current lockdown.

The episode has a scene where Jerry and Elaine must pick who flies first class and who flies economy, and Jerry says he will take it as Elaine won’t know what she is missing out on, whereas he can’t go back to flying economy.

‘Sure I agree that we have had our rights and privileges stripped down to a doctors appointment or a supermarket visit within a measly five kilometre radius,’ Mr Owen wrote.

‘However as a society, as a Sydneysider, as an Australian, we have been ‘flying first class’ since our birth or fortunate and privileged arrival into the greatest nation in the world. 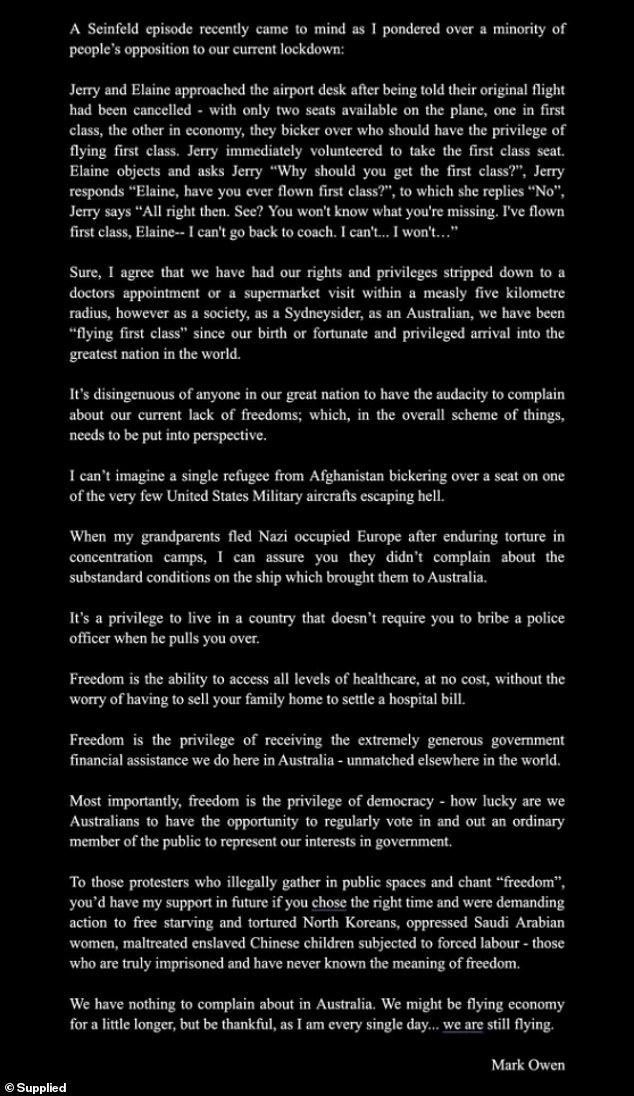 ‘It’s disingenuous of anyone in our great nation to have the audacity to complain about our current lack of freedoms; which, in the overall scheme of things needs to be put into perspective’.

He continues by comparing the experiences of those in lockdown with thousands trapped in Afghanistan as well as millions who experienced past atrocities, such as WWII.

‘I can’t imagine a single refugee from Afghanistan bickering over a seat on one of the very few United State Military aircrafts escaping hell,’ Mr Owen penned.

‘When my grandparents fled Nazi occupied Europe after enduring torture in concentration camps, I can assure you they didn’t complain about the substandard conditions on the ship which brought them to Australia’.

Normal freedoms have become few and far between, with the easing of restrictions only coming into effect when the vast majority of residents are vaccinated.

But Mr Owen doesn’t want Australians in lockdown to reflect on the small freedoms we are missing out on, instead pleading for people to look at the bigger picture.

‘Freedom is the ability to access all levels of healthcare, at no cost, without the worry of having to sell your family home to settle a hospital bill,’ Mr Owen writes. 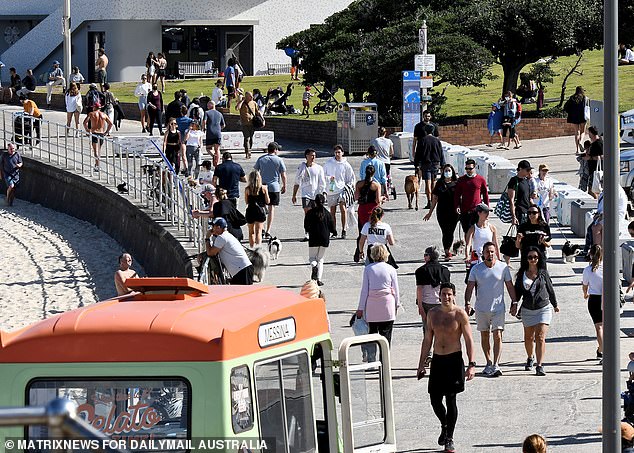 ‘Freedom is the privilege of receiving the extremely generous government financial assistance we do here in Australia – unmatched elsewhere in the world’.

Mr Owen finishes the letter by taking a jab at ‘freedom’ protestors, claiming they have nothing to complain about.

‘To those protestors who illegally gather…you’d have my support in future if you chose the right time and were demanding action to free starving and tortured North Koreans,’ Mr Owen writes. 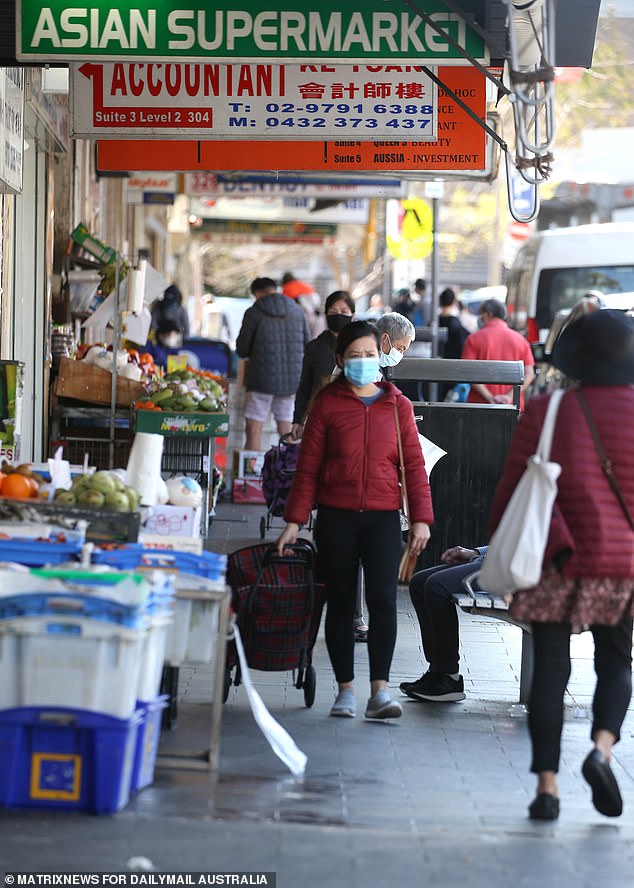 Comparing our experience to flying in economy class, when we have become so used to first-class treatment and living conditions in our country

‘Oppressed Saudi Arabian women, maltreated Chinese children subjected to forced labour – those who are truly imprisoned and have never known the meaning of freedom.

‘We have nothing to complain about in Australia. We might be flying economy for a little longer, but be thankful, as I am every single day.. we are still flying.

All of New South Wales is currently in lockdown, as well as Victoria and the ACT.

State and territory leaders have committed to limiting lockdowns and border closures when Australia finally reaches the 80 per cent double-jabbed rate.