A woman who quit her job to drive around Australia for a year in a van with her pet cat Luna has relived the terrifying moment her ‘first little home’ exploded on the side of a remote highway.

Bronnie Morgan packed up her life in Edithvale, south-east of Melbourne, in April to road trip through Queensland and the Northern Territory in her second-hand 2004 Toyota Hiace.

Three months into her journey, she noticed the engine was getting too hot and took the vehicle to a mechanic in Darwin to get a new radiator hose – but the serviceman told her to drive normally and come back for repairs on Monday in three days time.

‘I was making my way back up to Darwin from Litchfield National Park on the Monday when I noticed the temperature gauge on the coolant went right up,’ the 31-year-old told Daily Mail Australia. 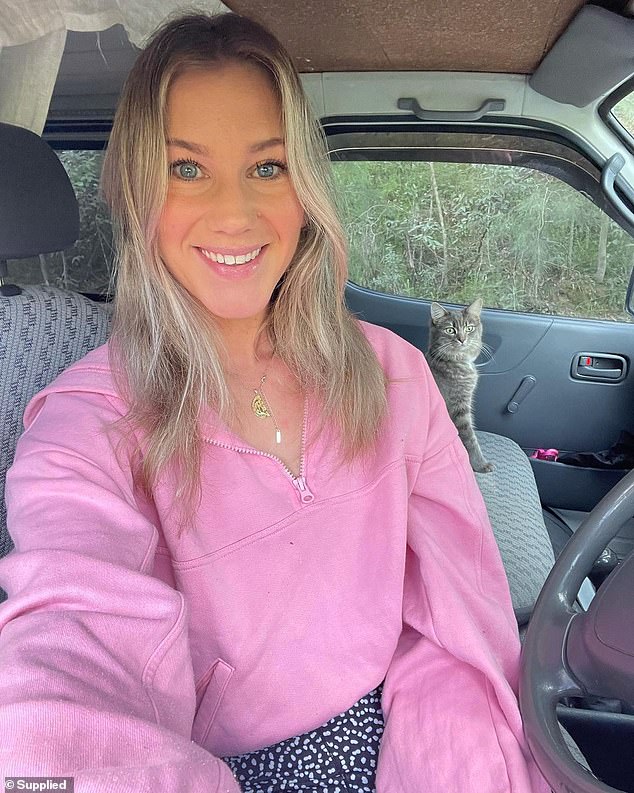 Pictured: Bronnie Morgan with her cat Luna inside the van she was supposed to travel around Australia in 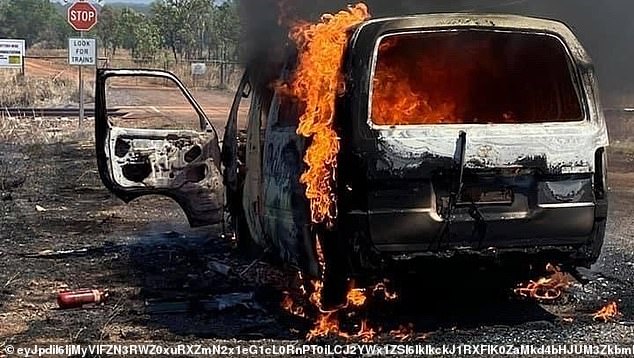 The van exploded (pictured) on the side of a highway, about 15 minutes south of Darwin 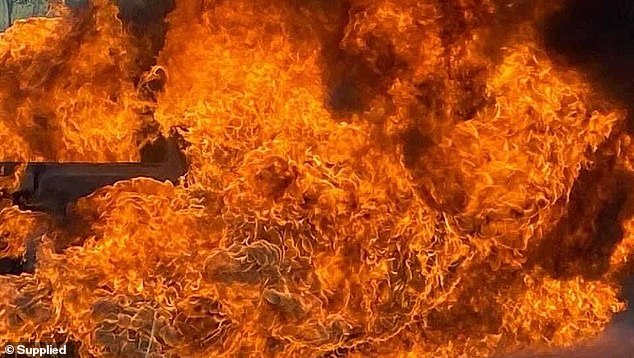 Bronnie had no choice but to sit back and watch as her ‘first home’ burned, along with all her possessions

‘I pulled over thinking I needed to put coolant in it, so I popped the bonnet and next thing I know there’s all this black smoke pouring out from the motor.’

When she saw flames licking the front tyre on the passenger side, Bronnie realised the situation was severe.

She had no phone reception, but grabbed Luna and a fire extinguisher and started trying to douse the flames herself – they disappeared at first, until the engine caught alight.

‘This couple ended up stopping to help me, and the guy looked at the van and said: “There’s no hope. Mate, get your stuff – we’re going to have to move away”.

‘He told me to get my wallet but my brain wasn’t working, and when I ran back I could see my laptop, so I got that too.’ 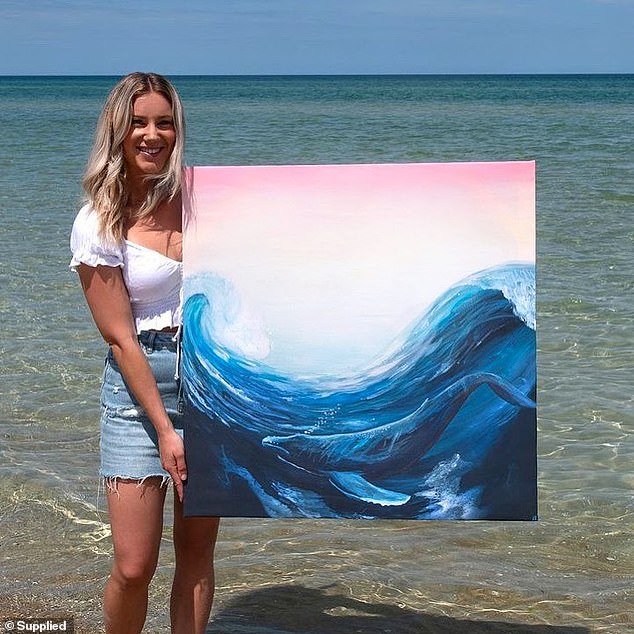 Bronnie is a graphic designer and yoga teacher. She painted a mural at Banyan Tree Caravan park 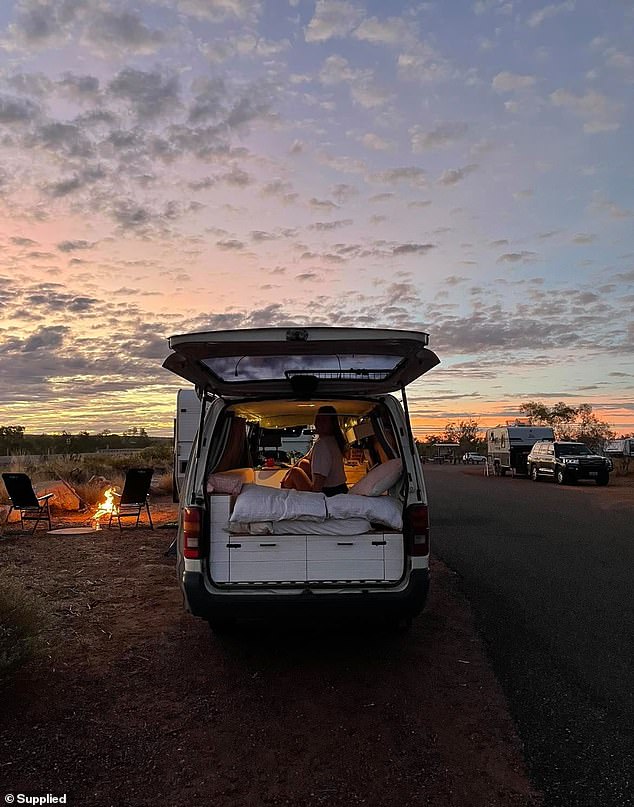 Pictured: Bronnie Morgan getting ready to spend a night in her van at a campsite, before the vehicle burned 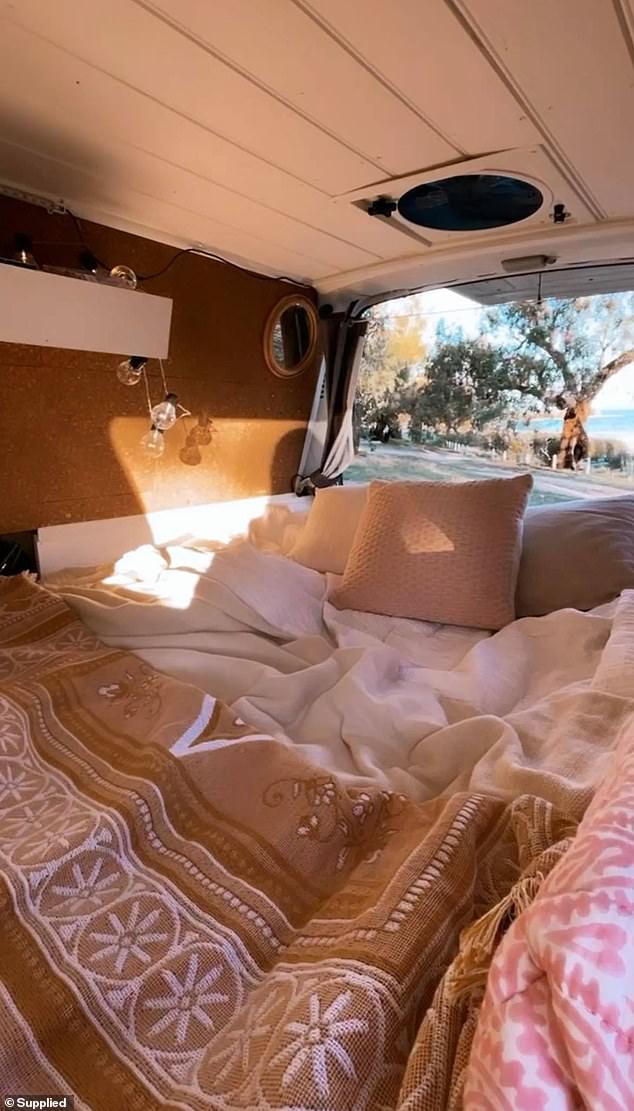 She paid about $19,000 for the Toyota Hiace all up, which included getting it professionally fitted out with kitchen appliances and a bed

She jumped in the car with the couple and teared up as she watched her van explode in a ball of flames as they drove down the highway – the flames were so high they burnt nearby trees.

The couple took her to their place in Litchfield where they called police and the fire brigade, who told her that vehicles regularly explode in the Top End.

‘A firefighter said it happens because the Northern Territory is so hot and you’re moving at about 130km/h – they just overheat,’ Bronnie said.

He also explained that fire likely started because some engine oil on the outside of the motor got too hot and ignited, and that there was nothing she could have done.

With all her possessions and plans destroyed in the fire, Bronnie stayed with the couple while she figured out what she was going to do next. 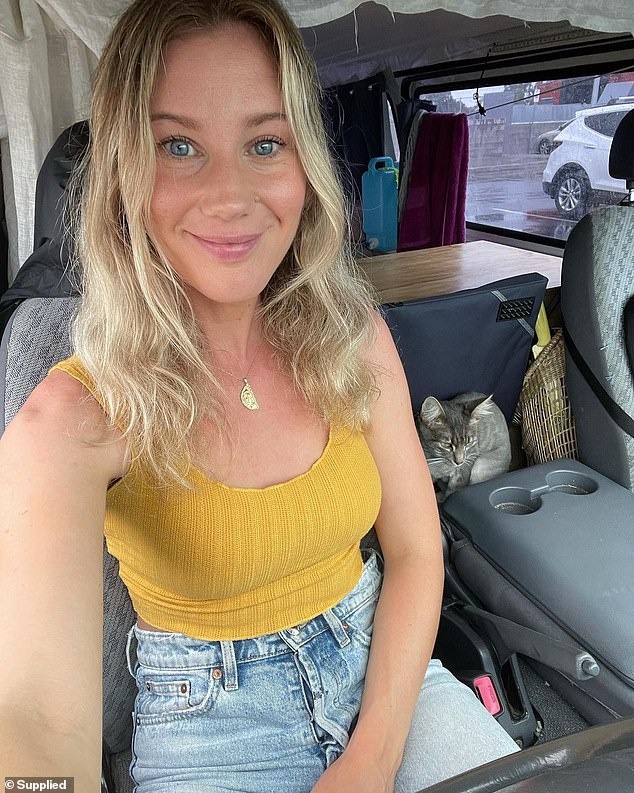 When she realised the van was not salvageable, she grabbed her cat Luna (pictured together) and a fire extingisher 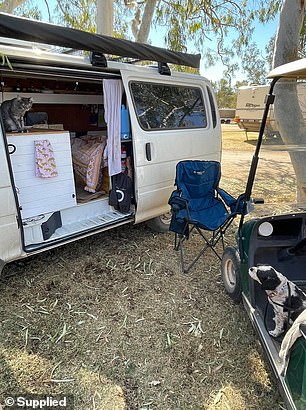 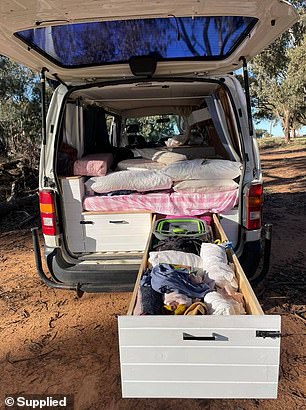 Bronnie lost all her possessions in the fire, including her camera and hard drive with all her work on it

‘I lost my drone, my digital SLR camera and my hard drive with all my work on it, but when you’re in that kind of situation, you only think about your loved ones and your pets,’ she said.

‘But it was really hard to watch my first home be destroyed – it represented my freedom and independence, and then I had to rely on others.’

The couple who helped her on the side of the road gave her a bed to sleep in and helped her get through the first few days.

‘They told me to call my mum, call the insurance company, buy food from the supermarket and some essentials from Kmart – they really took care of me,’ she said.

After a few days, Bronnie decided to continue her trip and travelled up to Banyan Tree Caravan Park where the owner helped her out with temporary accommodation in exchange for a mural and morning yoga classes for holidaymakers.

She is now in a relocation van driving from Darwin to Hervey bay in Queensland to stay with family, but says she would buy a van again.

‘This has thrown everything up in the air, but I do plan to eventually start travelling again,’ she said.