A grieving farmer has used sheep to create a moving masterpiece in a uniquely Australian gesture, paying tribute to his late aunt after Covid restrictions forced him to miss her funeral.

When Ben Jackson from Guyra, on the New South Wales Northern Tablelands, was unable to attend his  aunt’s funeral in Brisbane due to Covid border closures, the farmer honoured her in his own way.

Using some grain, a drone and a flock of sheep the resourceful farmer managed to orchestrate an incredibly creative heart formation, as he hoped she would ‘peep down from heaven’ to see it.

I made this for my Aunty Deb. We said goodbye yesterday. I hope you had a peep down from up there and saw this sheep art for you. Bridge over Troubled water by Simon and Garfunkel was one of her favourite tunes. 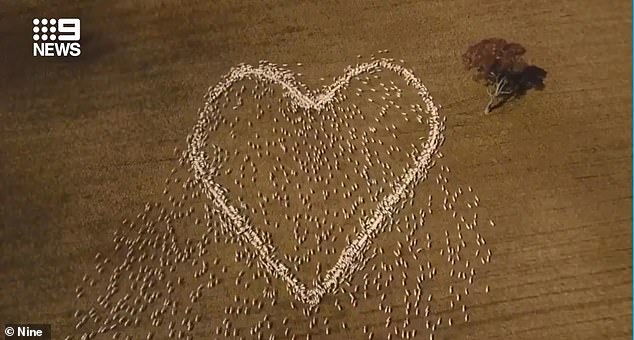 Mr Jackson had used the grain to create a heart shape pattern on grassy farmland where he then released dozens of hungry sheep and let the drone capture the rest.

The moving gesture was posted to Jackson’s Facebook on Tuesday night, accompanied by a heartfelt message captioned alongside the video.

‘I made this for my Aunty Deb. We said goodbye yesterday. I hope you had a peep down from up there and saw this sheep art for you,’ he wrote. 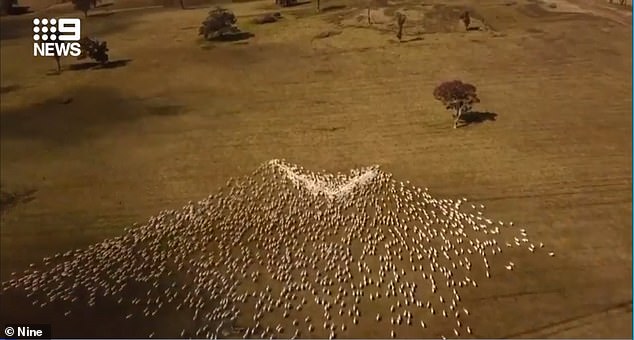 The Guyra farmer created the video using grain, a drone and a flock of very hungry sheep (pictured)

‘Bridge over Troubled water by Simon and Garfunkel was one of her favourite tunes.’

The touching tribute video from Mr Jackson was played at the end of Deb Cowdery’s funeral service.

Mr Jackson said the true reality of Covid-19 restrictions didn’t hit home until he found himself separated from his family during the time of his aunt’s death.

‘I was completely and utterly unprepared for how it’s affected me, the family and others, of course there are so many people who are doing it tough in Australia and the world.’