A Scottish Royal Navy sailor who drunkenly tried to force a female colleague to give him oral sex on a nuclear submarine has escaped being thrown out of the military.

Able Seaman Calvin Denver, 28, had been drinking with others in the mess of the Trident missile-armed vessel for over five hours when he started harassing the woman.

He repeatedly asked his victim to ‘suck his d***’, a court martial was told and, when she refused, he got out his penis in front of his fellow drinkers and shoved it in her face towards her mouth.

Bulford Military Court, Wiltshire, heard that although she moved to avoid it, it touched her nose, the court heard.

The engineer technician, who stood motionless dressed in full uniform while being sentenced, was criticised by a judge for his ‘disgusting’ and ‘disgraceful’ behaviour.

However, he avoided being dismissed from the Navy and will be allowed to resume service after serving nine months detention at a Military Corrective Training Centre.

The submariner was seen smiling and laughing with three uniformed friends as he left the court martial, ahead of starting his sentence. 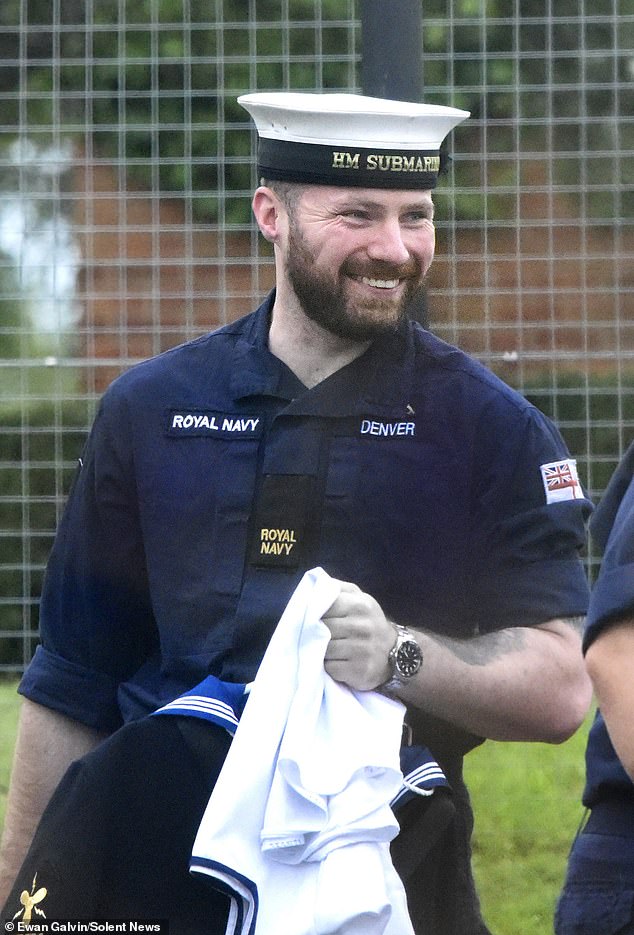 The court martial heard that AB Denver and his fellow colleagues started drinking in the mess on board the submarine – which was moored alongside the Faslane Naval base – at 7pm.

In the early hours of the morning, the woman joined them in the mess and AB Denver was drunk, the board was told.

He was described as being ‘loud’ and ‘boisterous’, the court heard.

Lieutenant Commander Solomon Hartley, for the prosecution, told the court: ‘He began asking questions about her sexual history and at one point asked her ‘why won’t you shag me? You have already shagged him’.

‘The victim ignored it and laughed it off. He then began to ask her to ‘suck his d***’ and kept repeating it which she found aggressive as he was saying it loudly and she described feeling threatened by him.

‘He then went next to her and after ten minutes, he stood up and unzipped his trousers. She was telling him to stop but he ignored that and pulled out his penis.

‘He continued asking her to ‘suck his d***’ and was in view of all others in the mess at the time.’

The court heard the woman felt both ‘awkward’ and ‘intimidated’.

Lt CDR Hartley continued: ‘He was stood there with his penis held in both his hands and he moved it towards her mouth. She moved to avoid it and it touched her nose.’

The panel were told the woman then left before having a shower and going to bed – she reported the incident the following day.

AB Denver had been so drunk he had not remembered the previous night’s events, but when colleagues told him what had happened he apologised to her, the panel was told.

The court heard AB Denver, who the hearing was told had been deployed on the two longest recorded patrols on submarines in Royal Navy history with one lasting over 140 days, was described as having ‘poor mental health’ at the time due to a recent break up and his father’s ill health. 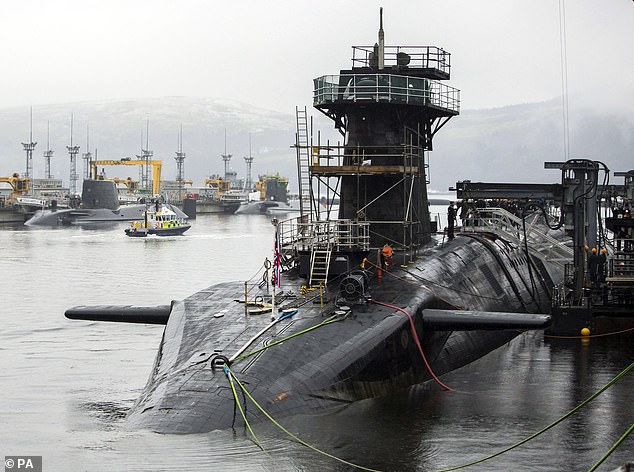 He had been drinking with others in the mess of a Trident missile-armed vessel (HMS Vigilant stock, not the submarine where the incident took place) for over five hours when he started harassing the woman

He pleaded guilty to one charge of sexual touching without consent.

Judge Advocate Jane England said: ‘Your behaviour was disgraceful and disgusting. You were trying to get her to do what you wanted. She thought you were going to try and make her suck your penis.

‘This was in the presence of others [in the mess] where she was entitled to feel comfortable and relaxed. This was appalling behaviour by you but it is the only thing you have done in your four years of service.

‘You immediately apologised to the woman. You pleaded guilty at the earliest opportunity and have shown remorse for your actions.’

The board concluded that AB Denver will be sent to the Military Corrective Training Centre based in Colchester for nine months where he can ‘reflect’ on the incident.

The court heard AB Denver can return service after that period and must keep the police aware of his movements for the next five years.