US Embassy staff in Kabul say they feel ‘betrayed’ and ‘deeply disheartened’ by the US and said ‘it would be better to die under the Taliban’s bullet’ than face the bloody chaos outside the Kabul airport, where some staffers have been attached, trampled and suffered serious injuries.

The jarring statement was part of a diplomatic cable from US Embassy staff, who said they’ve been separated from their children, according to NBC News, which obtained the diplomatic cable.

‘Happy to die here, but with dignity and pride,’ another embassy staff said, while a third accused the U.S. of prioritizing Afghan government elites American contacts.

About 300 Afghans asked to get out of Kabul airport and return to their Taliban-run cities because the conditions have spiraled out of control, a State Department official said.

Temperatures have been between 85 and 95 degrees Fahrenheit around the airport – essentially a dustbowl – nearly every day as the desperate mob of tens of thousands of people with young kids try to save their families from Taliban attacks, stampedes or being crushed against the airport gates.

US troops are doing what they can to help US civilians and their Afghan allies prevent dehydration and heat exhaustion, with items like water bottles in short supply and needing to be rationed out.

A US Marine seen in a viral video giving water to six young children is being hailed as a hero in one of very few singular shining moments in an otherwise helpless and deadly situation outside the Kabul airport.

The video shows the Marine with a large water bottle surrounded by children’s innocent smiles in a rare but heartwarming scene that gave a sense of humanity in the bleakest of times. 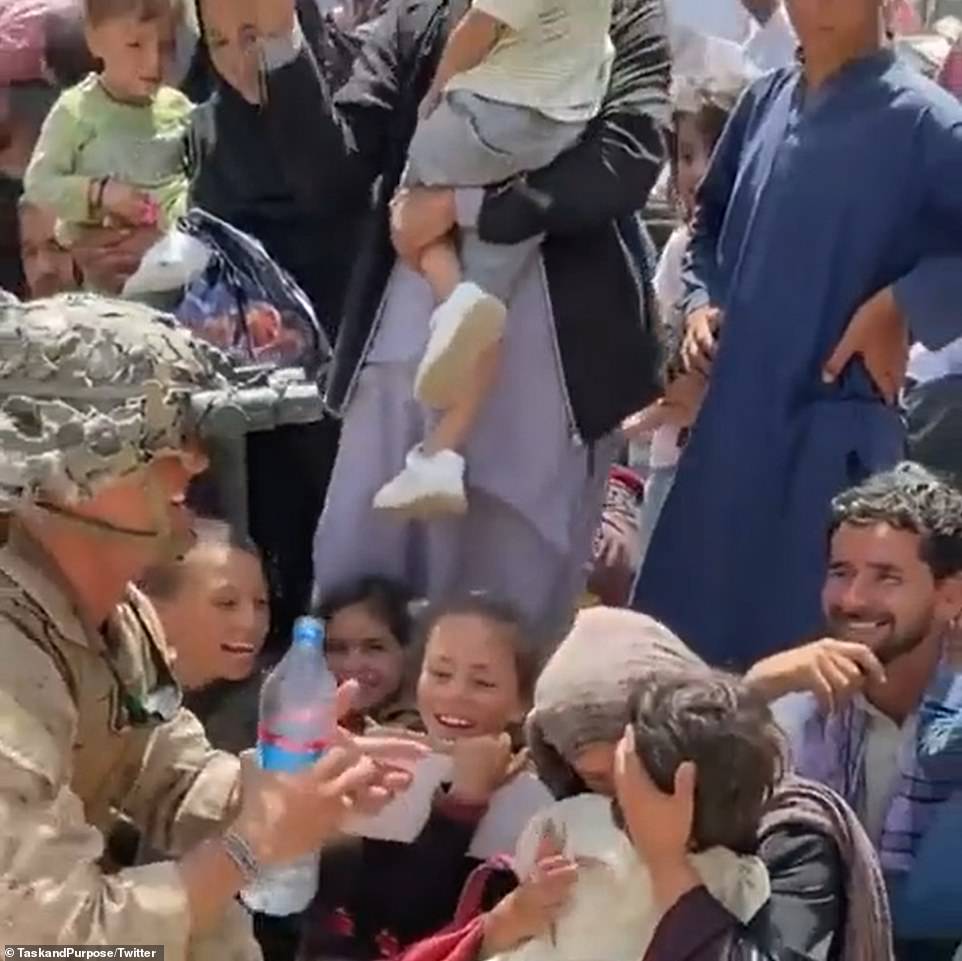 In a shining moment, a US Marine is seen on video handing out water to children 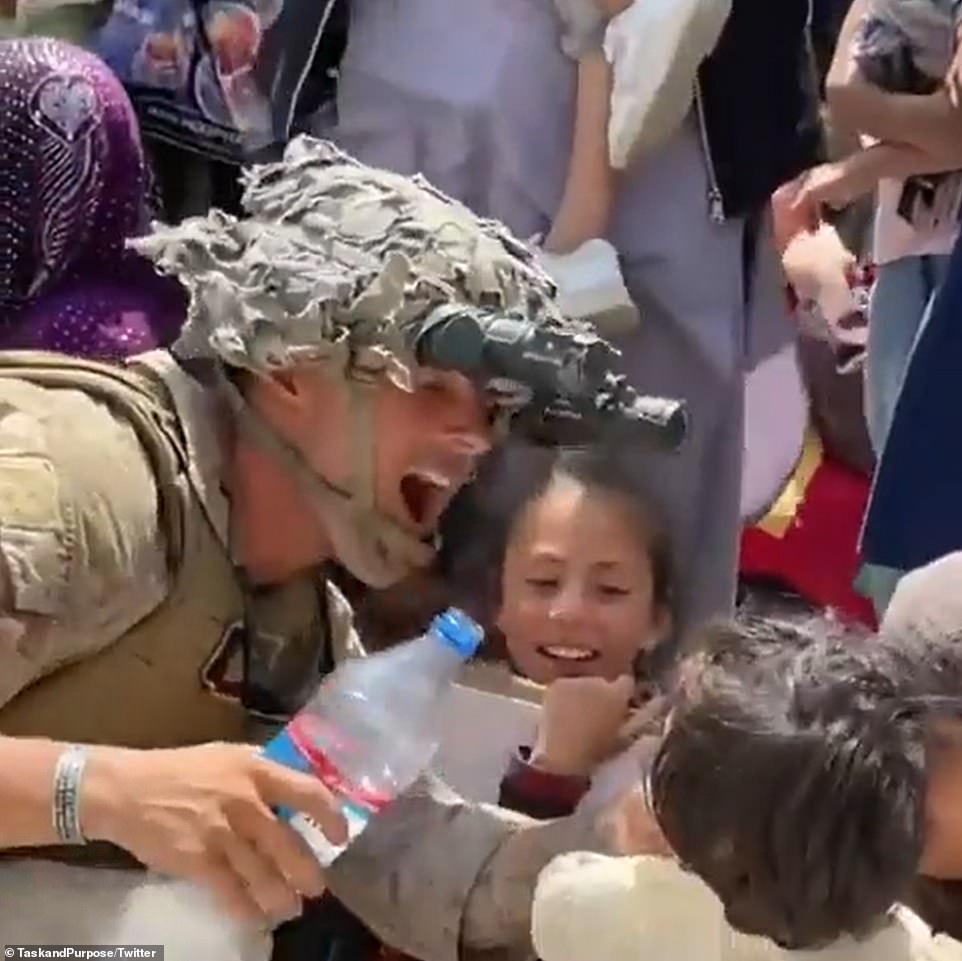 Smiles are the rarest site in and around the Kabul airport over the last two weeks, but it was all over this viral video of a Marine helping children 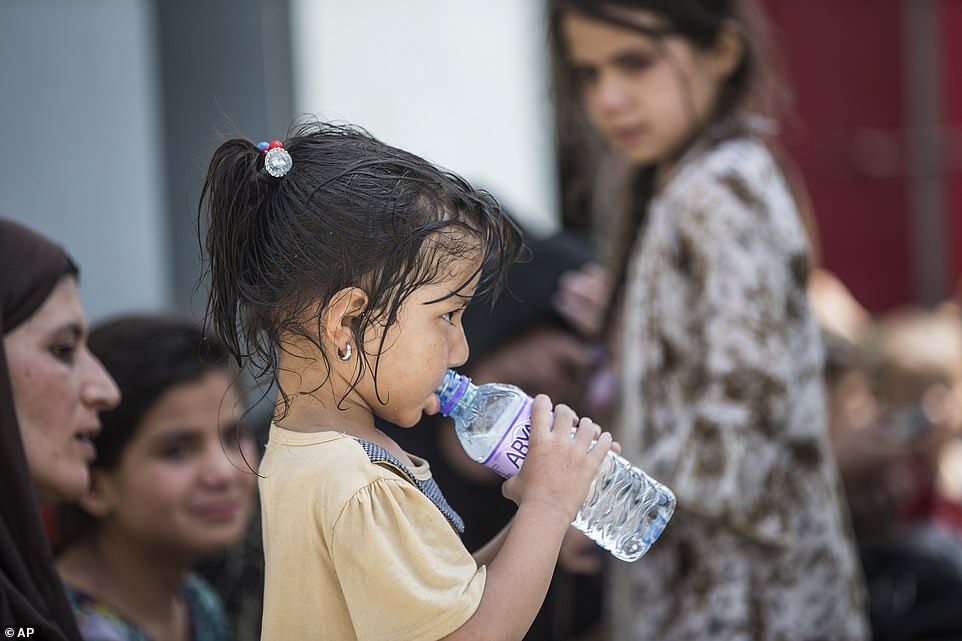 A child drinks water in Kabul, which has been between 85 and 95 degrees Fahrenheit nearly everyday for the last two weeks, as dehydration and heat exhaustion set in 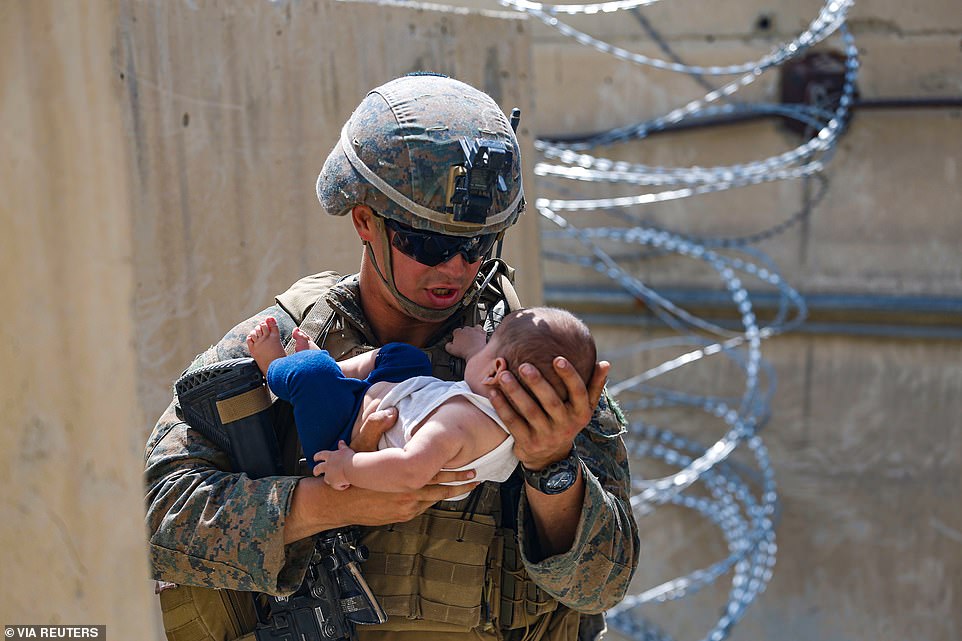 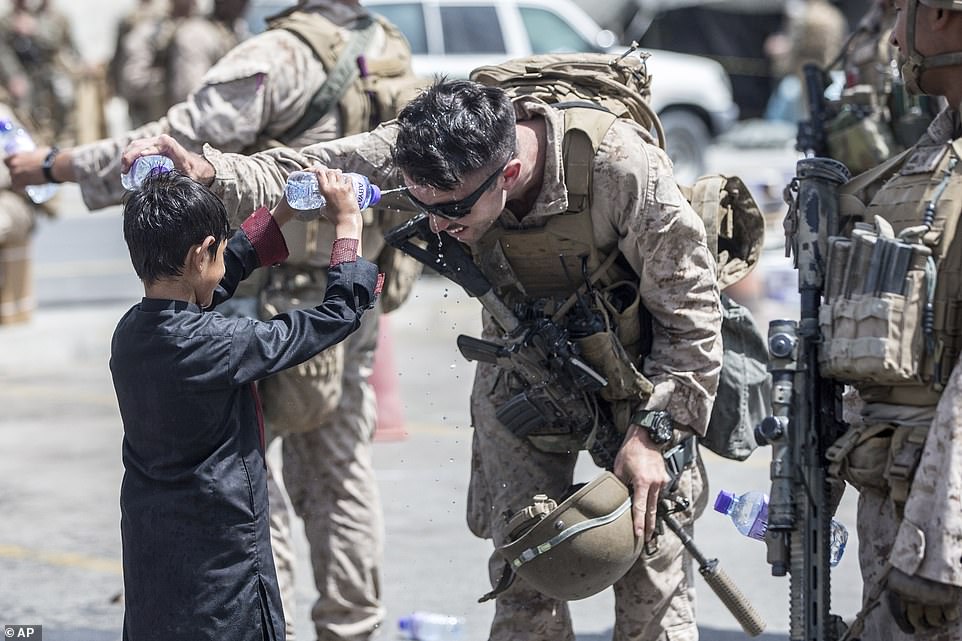 Another picture that’s gone viral on Twitter and other social media platforms shows a different Marine assigned to the 24th Marine Expeditionary Unit (MEU) comforting an infant while they wait for the child’s mom during processing.

But these fleeting moments are like specs of light swallowed up by a black hole.

‘We’ve seen wrenching images of people hurt, even killed that hit you in the gut,’ Secretary Blinken told FOX News.

‘And it’s very important to make sure to the best of our ability, because it’s such a volatile situation, that we do something about the crowding at the gates of the airport, and that’s exactly what we’re doing.’ 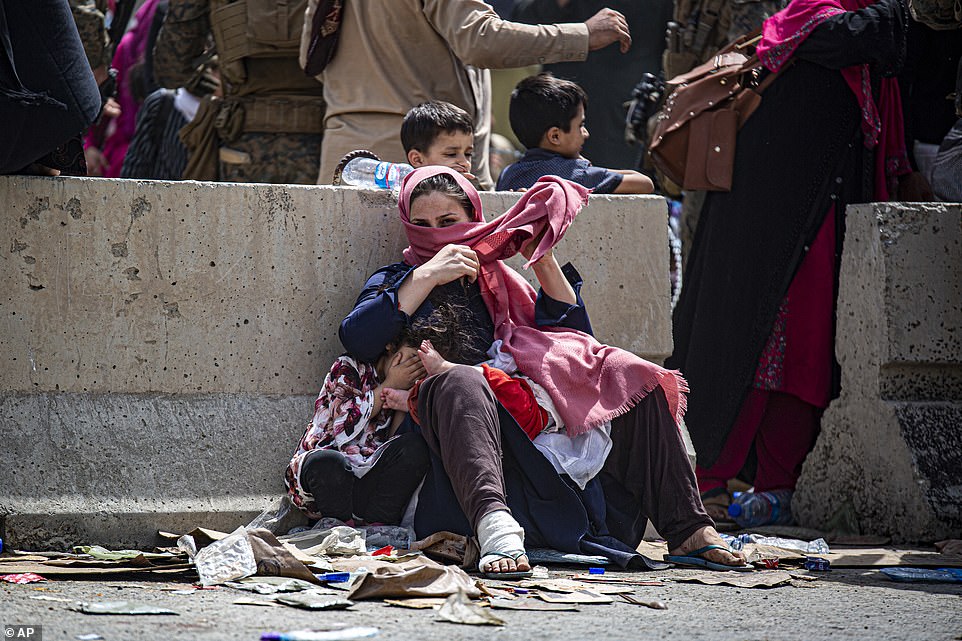 A woman and children wait for transportation to the terminal at Hamid Karzai International Airport in Kabul, Afghanistan. 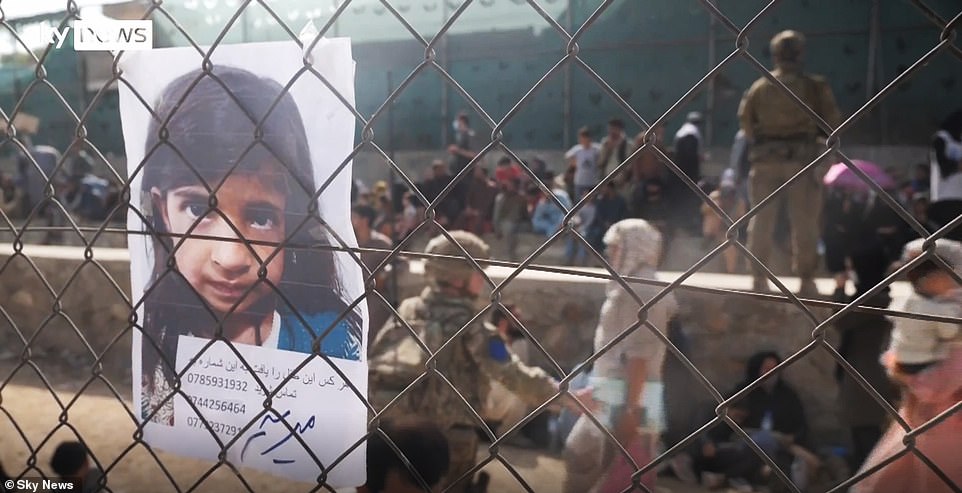 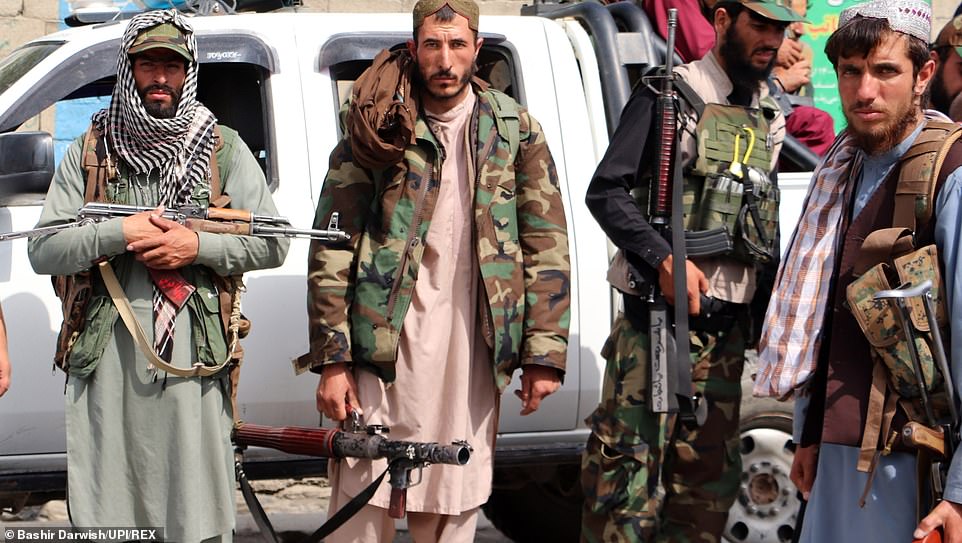 Taliban fighters stand guard as Afghans gather outside the Hamid Karzai International Airport to flee the country, in Kabul on on August 21 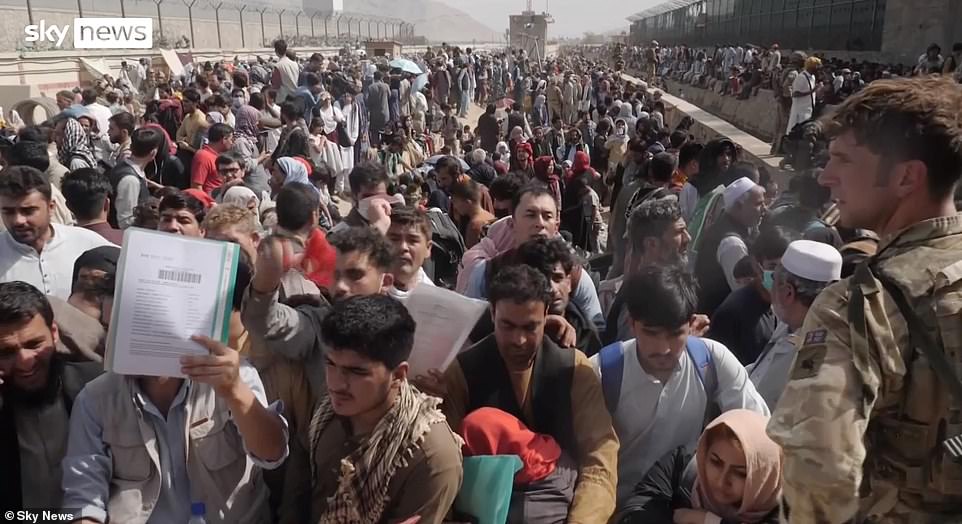 Dusty, rubbish strewn street filled with thousands of people desperate to take the steps needed to get into Kabul airport and out of the Taliban-run country 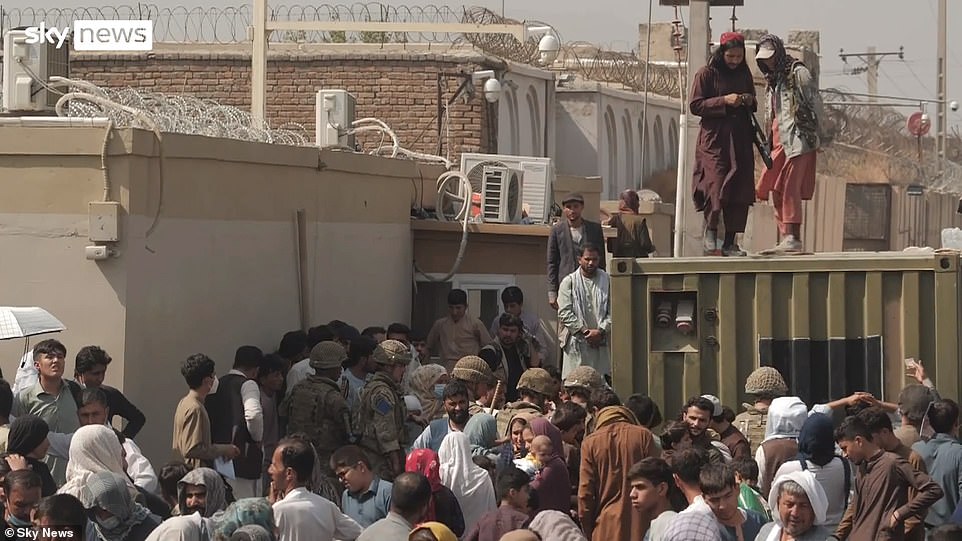 Taliban fighters on containers overlook the streets outside of Kabul airport

President Joe Biden said during a Sunday press briefing that about 11,000 people have been evacuated in the last 36 hours, but at least seven people have been crushed to death, including a two-year-old child.

And now terrorist threats – particularly from the local affiliate of ISIS, which are enemies of both the U.S. and the Taliban – are making the evacuation more complicated, the scene tenser and ramping up the urgency to get people out of the country.

There’s concern that ISIS leaders see this as an opportunity to kill Americans while challenging Taliban for control of Afghanistan.

That threat prompted the US Embassy to issue a warning Saturday telling Americans not to brave the chaos around the airport unless they have been told to report.

In the ensuing hours, details emerged that evacuation flights were dropping flares and making steep combat landings after warnings that terrorists of the Islamic State might try to shoot down a plane.

To hasten the evacuation pace, six commercial airlines have agreed to help the US government transport people out of Kabul.

On Sunday, the US called up 18 civilian aircraft from United Airlines, American Airlines, Delta Air and others to carry people from temporary locations after they landed on flights from Afghanistan, leaning on the industry it last called on during the Iraq War in 2003, Reuters reported Sunday evening.

The move highlights the difficulty Washington is having carrying out the evacuations following the Taliban’s swift takeover.

American and Delta said they would start relief flights on Monday. 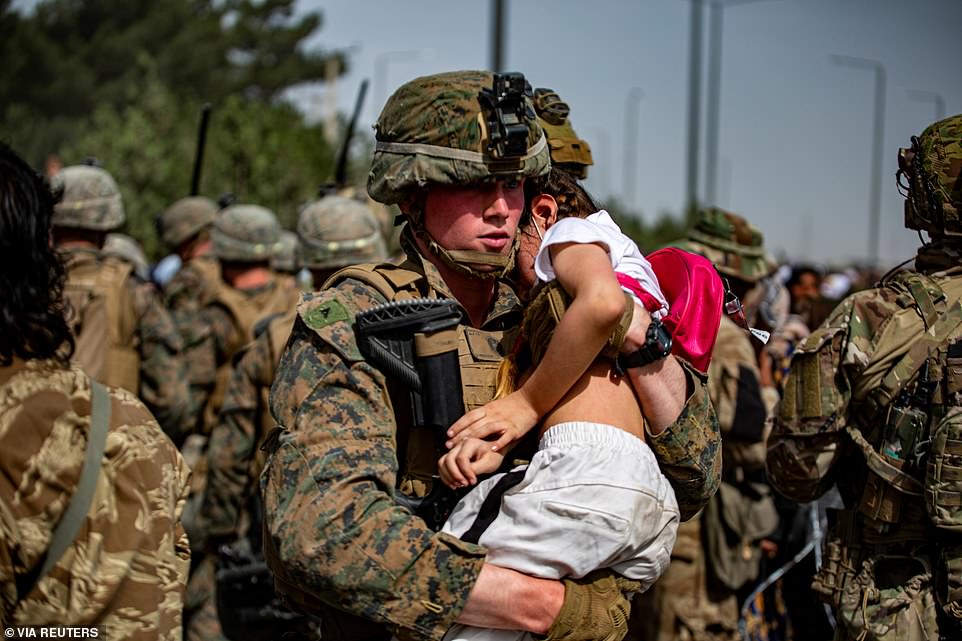 A U.S. Marine carries a girl to the gate at Hamid Karzai International Airport, August 20 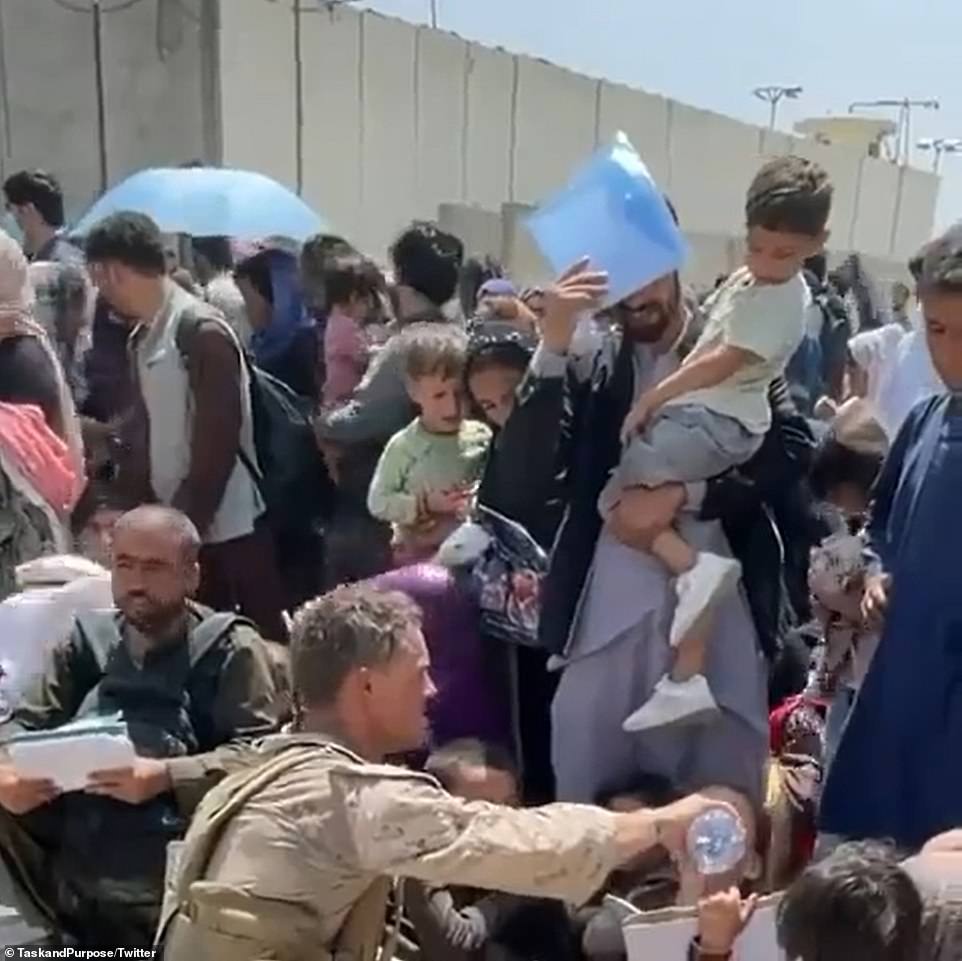 The Marines and military forces are seen in pictures like this doing what they can to help the situation in Kabul airport, which has spiraled out of control 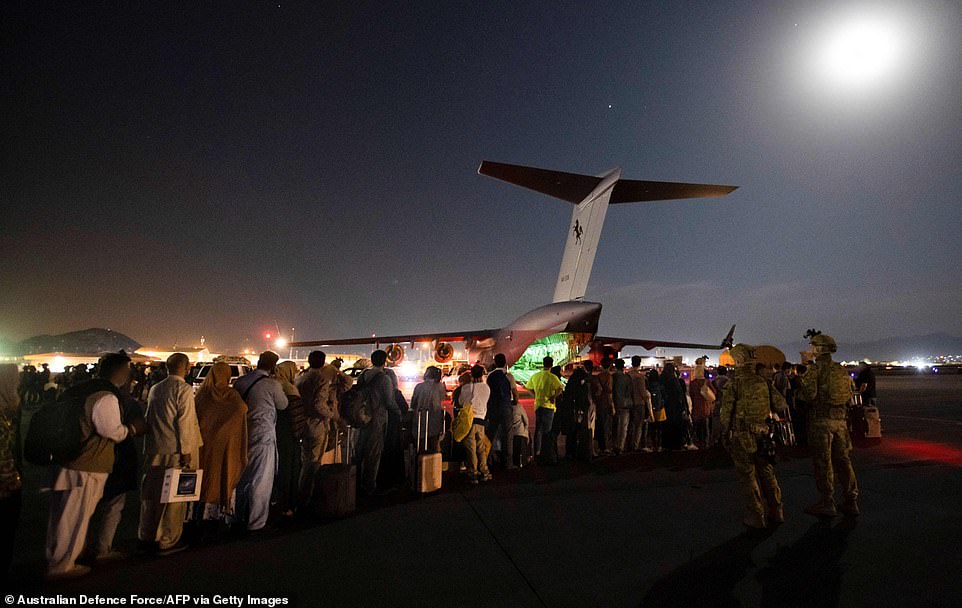 President Joe Biden said during a Sunday press briefing that about 11,000 people have been evacuated in the last 36 hours 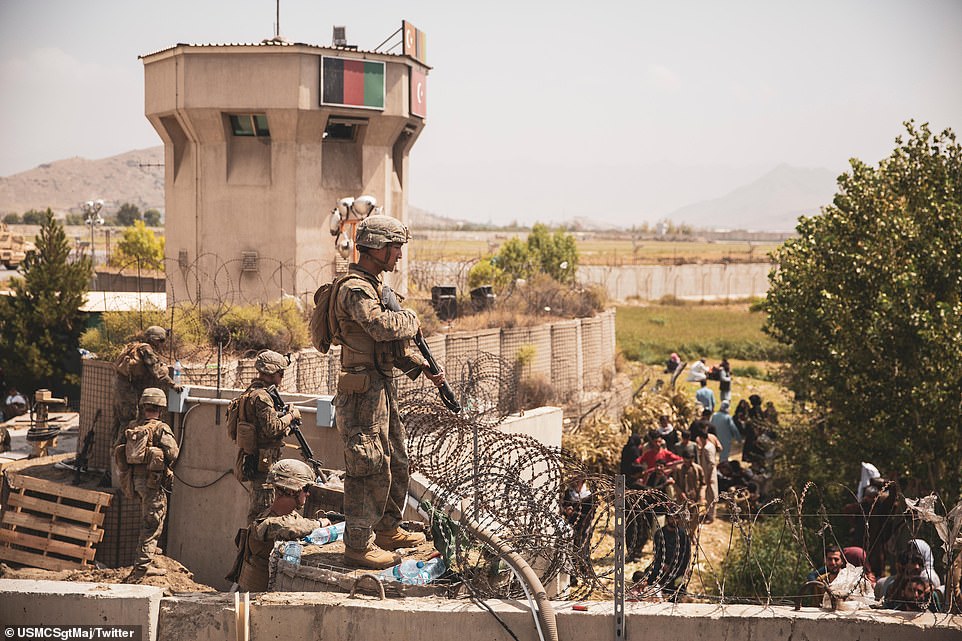 Meanwhile, British soldiers desperately shouted for medics and stretchers, as unconscious people were carried away, many being pronounced dead and covered in white sheets, according to a Sky News report on Saturday.

Other paratroopers tried to pull people – including young children – from the chaos, and stood atop compound walls, spraying the crowd with hoses to try and cool them down, as medics dashed between casualties.

There were also scenes of people left injured and bloodied, sat amongst piles of papers and discarded clothes near the site, while others stood shoulder to shoulder, amid sounds of screams and gunshots, the Sun reports.

Tweeting from the airport this afternoon, journalist Kim Sengupta said he had witnessed ‘four people, all women, die from the heat and crush’.

Sky News’ chief correspondent Stuart Ramsay also reported that people at the front of the crowd of thousands were being ‘crushed to death’, in what he described it as ‘the worst day by far’ at Kabul airport.

In a sign the crisis at Kabul is deepening, Germany’s government today warned that access to the airport is not often possible’ and that the area remains ‘extremely dangerous’.