President Joe Biden laughed off a question about his declining poll numbers amid the rising chaos in Afghanistan during a press conference in the Roosevelt Room of the White House on Sunday.

‘I haven’t seen that poll,’ Biden said of a CBS News/YouGov survey that shows 74 percent of respondents believe withdrawal from the Taliban-overrun country has gone ‘very badly’ or ‘somewhat badly.’

Biden chuckled when the reporter responded that the poll is ‘out there,’ but the results are no laughing matter.

Biden’s withdrawal, which was announced by former President Donald Trump in February 2020, is down to 47 percent approval from 60 percent in July, before the Taliban inched their way into Kabul, took over the presidential palace and sent President Ashraf Ghani fleeing to the United Arab Emirates.

The sample of 2,142 Americans also find him to be less competent, focused and effective than in April.

Biden’s overall approval rating also took a tumble amid a surge in the Delta variant and the latest crisis in the Middle East, down to 50 percent from 62 percent in March. 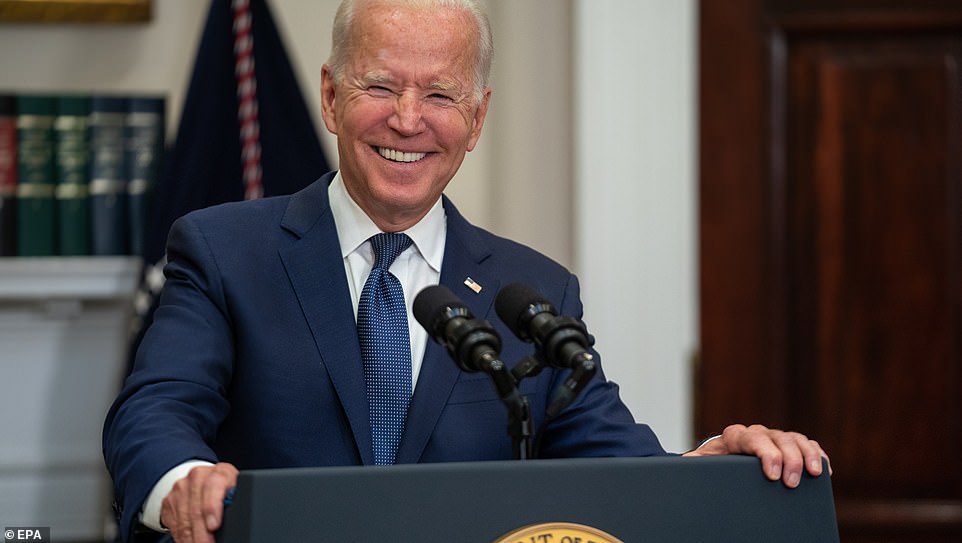 On Sunday, President Biden chuckled after getting some bad poll results from a reporter, who said that the CBS News/YouGov poll was ‘out there’ after the president insisted that he hadn’t seen it 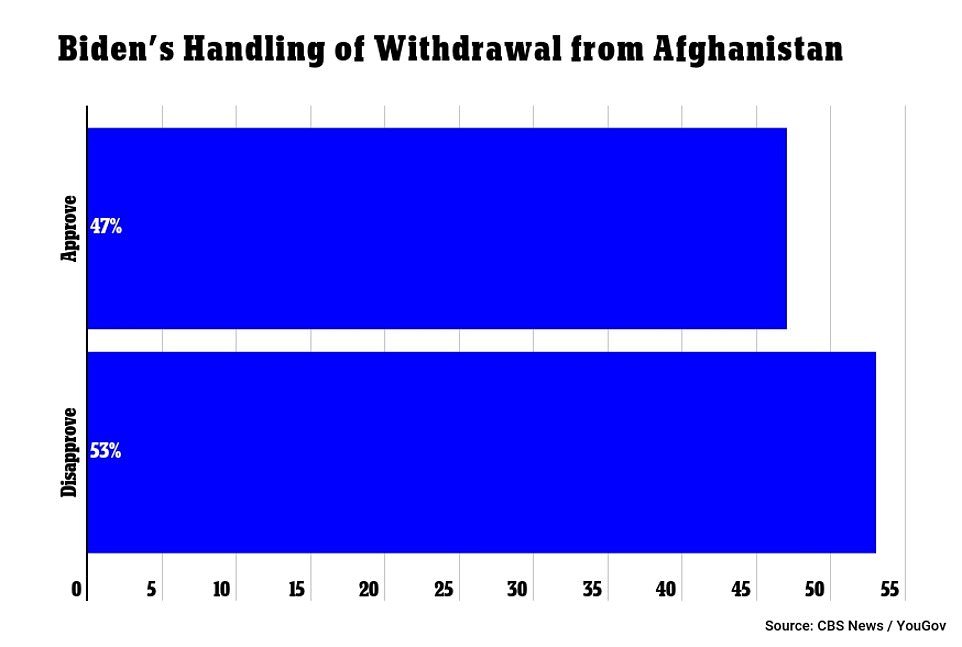 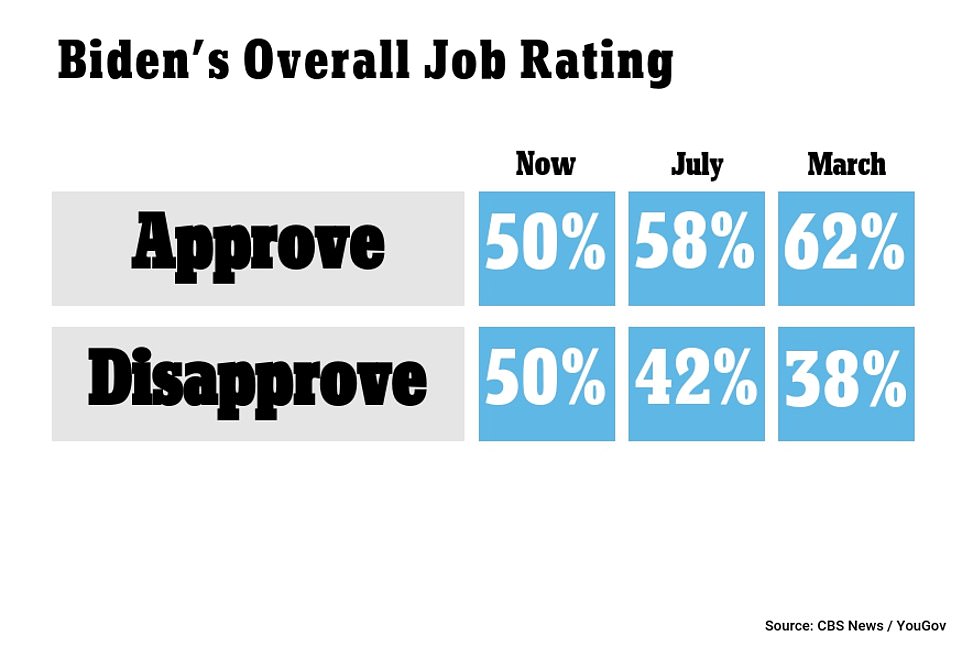 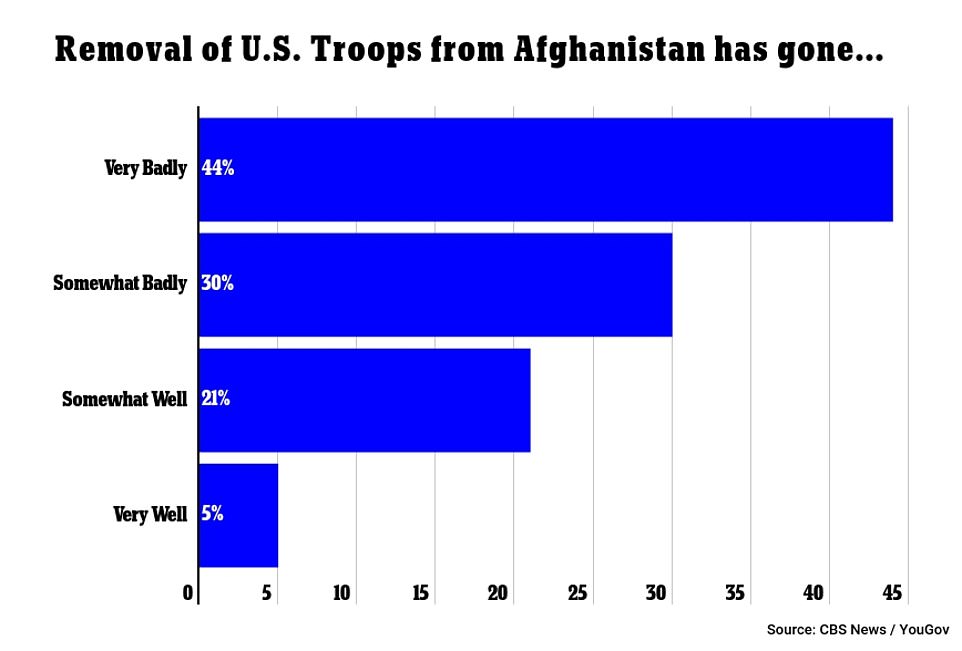 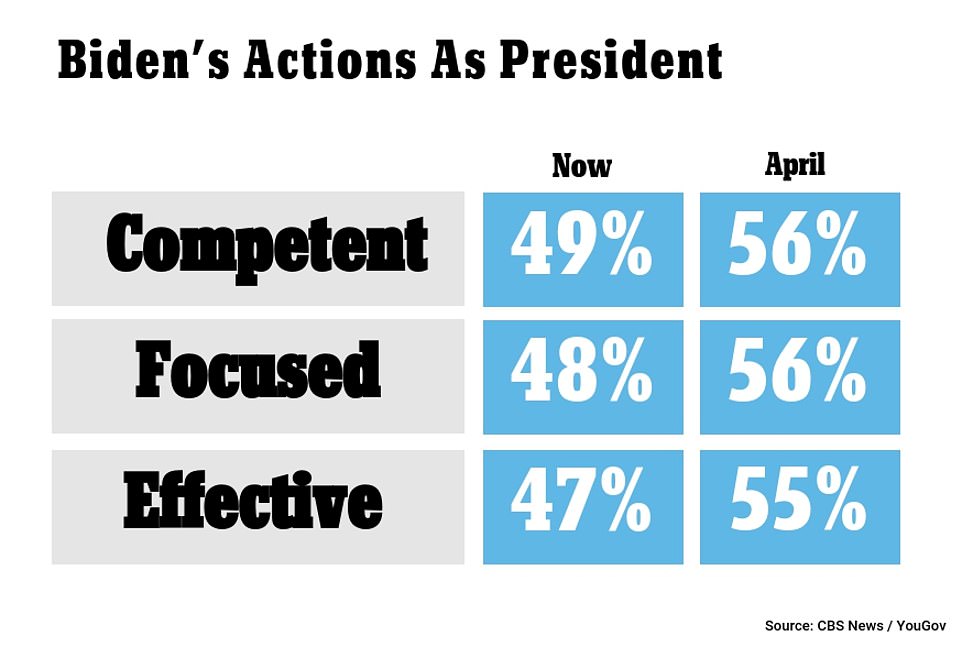 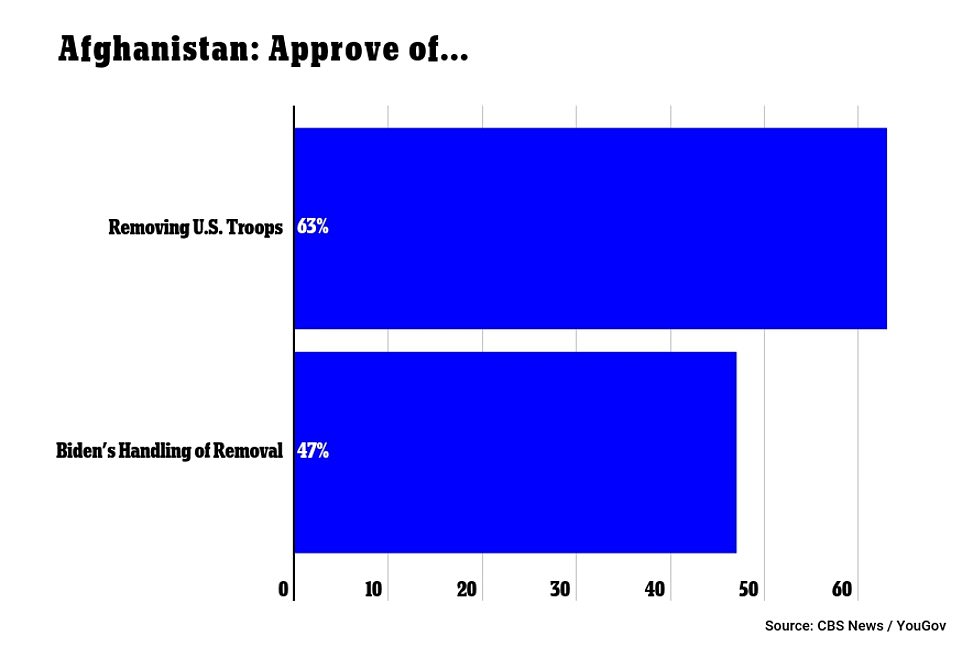 The survey of more than 2,000 Americans found that Biden’s approval rating and his handling of the Afghanistan withdrawal have fallen in recent months as the Taliban take over the country after 20 years of US occupation

He then reached for a card underneath his lapel and began reading from it.

‘You know I carry this card with me every day,’ he said.

‘Either increase the number of forces we keep there and keep that going, all right, end the war, and I decided to end the war.

‘As I said the other day, the only reason we’re in Afghanistan is this is the place from which Bin Laden attacked the United States of America.’

In May 2011, a team of US Navy SEALs captured and killed Osama Bin Laden, who had planned the September 11 attacks that destroyed the Twin Towers in Manhattan and killed 3,000 people, at a compound in Pakistan.

‘So the question is when is the right time to leave? Where are our national interests? Where do they lie?’

Biden went on to liken terrorism to a cancer that had ‘metastasized’ around the world, and insisted that it can be fought without ‘permanently basing’ American forces anywhere.

‘My job is to make judgments no one else can or will make,’ he said.

‘I made them, I’m convinced I’m absolutely correct in not deciding to send more young women and men to war for a war that is, in fact, no longer warranted.’

Most Americans are still with the president on leaving the country, with 63 percent still in favor of removing US troops.

Biden also revealed US forces may stay beyond his deadline of Aug. 31 as he tries to accelerate the operation to rescue Americans after days of chaos and crushes at Kabul airport.

He said that U.S. forces had expanded the perimeter around the airport amid fears terrorists may seek to exploit the operation by attacking Americans or Afghan civilians.

But things were moving in the right direction with some 33,000 people brought to safety, he said.

‘Let me be clear – the evacuation of thousands of people from Kabul is going to be hard and painful,’ Biden said during a speech at the White House.

‘No matter when it started, when we began, it would have been true if we had started a month ago, or a month from now.

‘There is no way to evacuate this many people without pain and loss and heartbreaking images you see on television.

His speech marked the latest attempt by the White House to seize control of a crisis that is rapidly turning into a humanitarian and political disaster.

A similar effort on Friday backfired when Biden claimed that he knew of no cases of Americans being stopped from reaching Kabul airport – only to be flatly contradicted by the Pentagon.

Things have only worsened since then, with reports that seven people died in the crush around the airport, including a two-year-old. 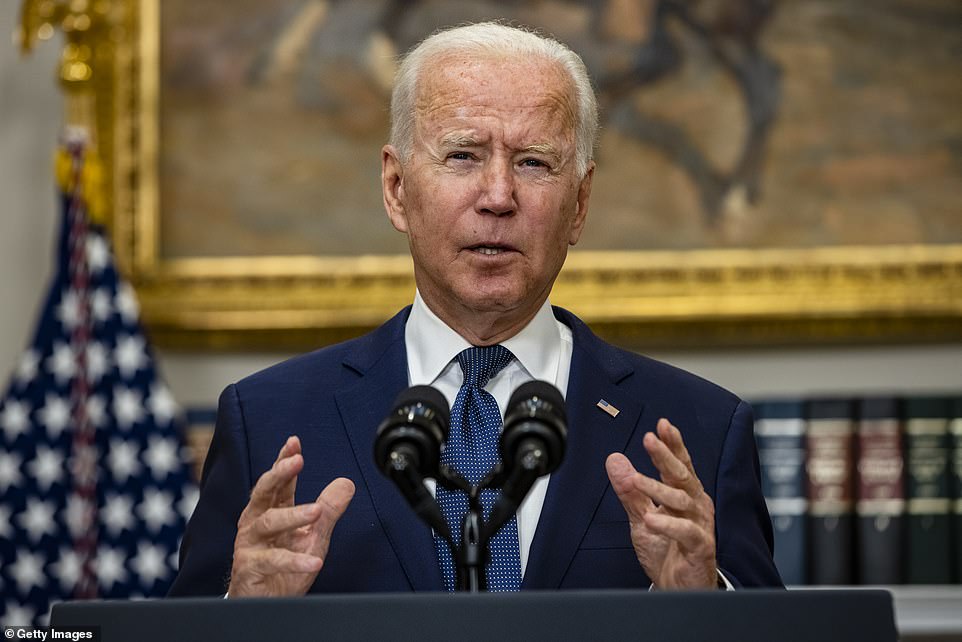 President Joe Biden says the United States is ‘working hard’ and as ‘fast as we can’ to get Americans and U.S. allies out of Afghanistan, noting that 33,000 people have been evacuated from the country since July 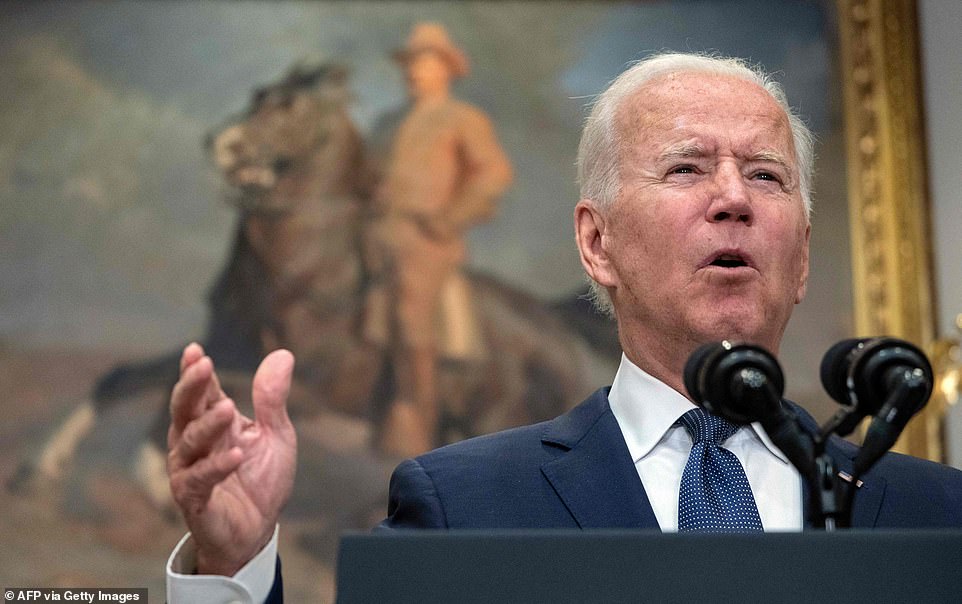 Speaking in the Roosevelt Room of the White House, Biden said U.S. forces had extended the perimeter around the airport to improve security 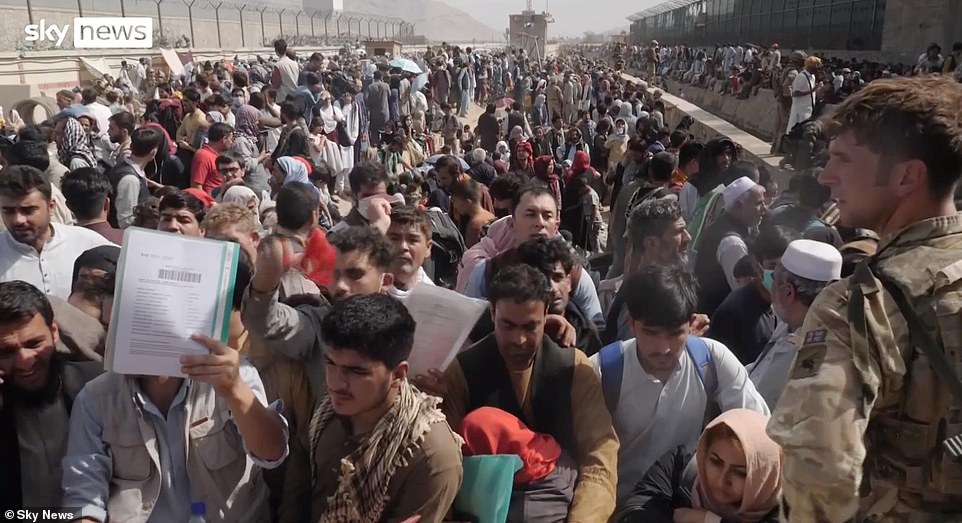 Thousands of people surrounded the Kabul airport Sunday, desperate to take the steps needed to cross the threshold to sanctuary 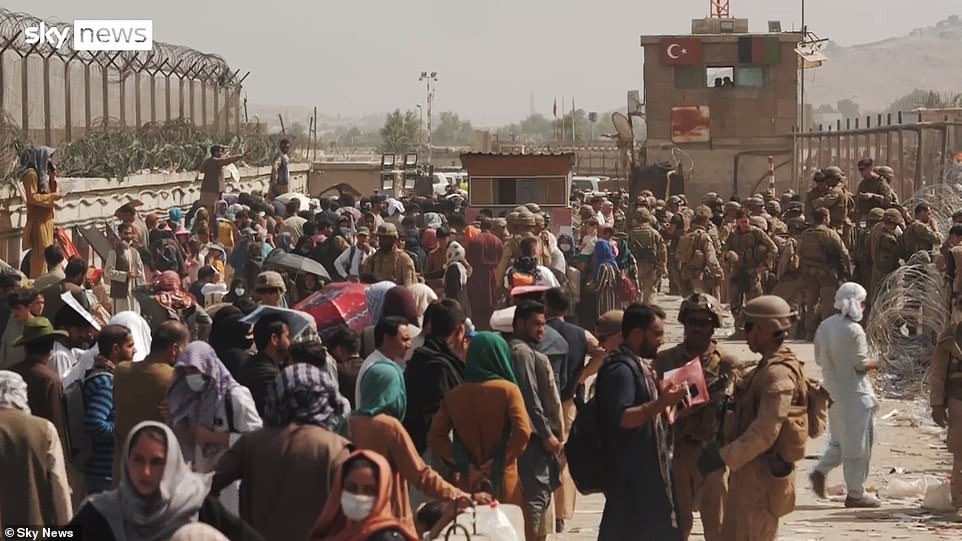 Biden said that as many as 33,000 people had been evacuated since July, including some 11,000 during a single 36-hour period.

Defense officials ‘hope’ they will not have to extend the evacuation operation, he added, but ‘there are going to be discussions I suspect on how far along we are in the process.’

He also said troops were maintaining constant vigilance against terrorist threats, particularly from the local affiliate of ISIS, sworn enemies of the both the U.S. and the Taliban.

‘The security threat is changing rapidly,’ he said.

‘There are civilians crowded at the airport, although we have cleared thousands of them.

‘We know that terrorists may seek to exploit the situation and target innocent Afghans or American troops .’

Every day that American troops and civilians are at the airport is another day of risk that terrorists launch an attack from distance.

But he said the Taliban had been helpful.

‘We discussed a lot with the Taliban,’ he said. ‘They’ve been cooperative in extending some of the perimeter.’

But he declined to describe further ‘technical changes’ designed to improve security.

‘So far the Taliban has not taken action against U.S. forces,’ he said, rapping his knuckles on the lectern as if knocking on wood.

‘So far they have, by and large, followed through on what they said in terms of Americans to pass through .

‘And I’m sure they don’t control all of their forces. It’s a rag tag force.

‘And so we’ll see if what they say turns out to be true.

Conditions deteriorated further at the weekend. The U.S. was forced to tell Americans not to try to brave the chaos around the airport unless they have been told to report.

And it emerged that evacuation flights were dropping flares and making steep combat landings after warnings that terrorists of the Islamic State might try to shoot down a plane.

Biden is still facing questions about why his administration did not have a better evacuation plan after being warned that the Taliban could sweep into Kabul within days.

Against that backdrop of criticism, the White House tried to show a president hard at work on a Sunday. 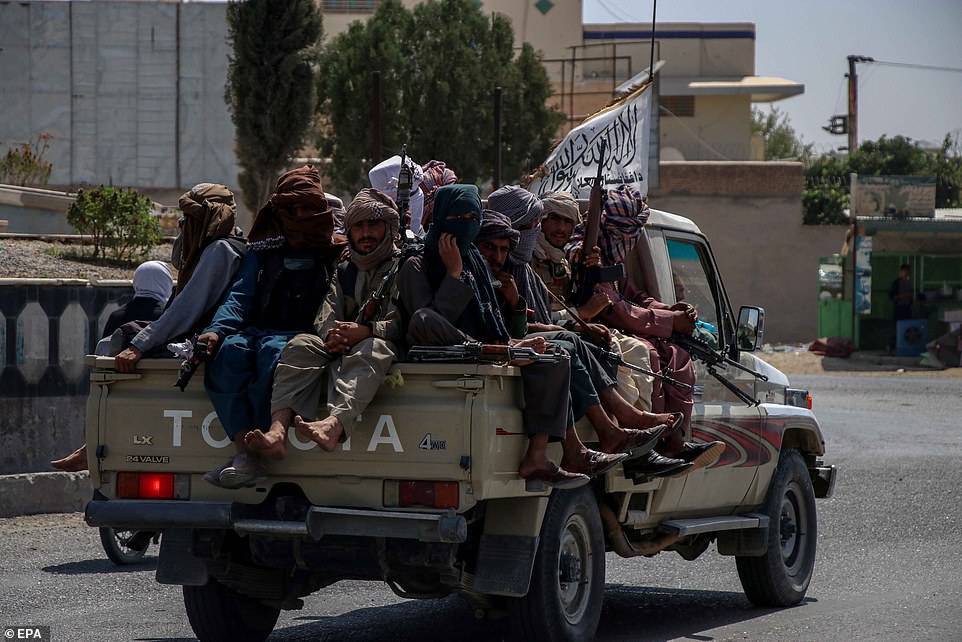 The Afghan interim council, formed to assist in the power transfer following President Ashraf Ghani’s escape, has met several Taliban leaders to discuss issues related to control and security during the transition process 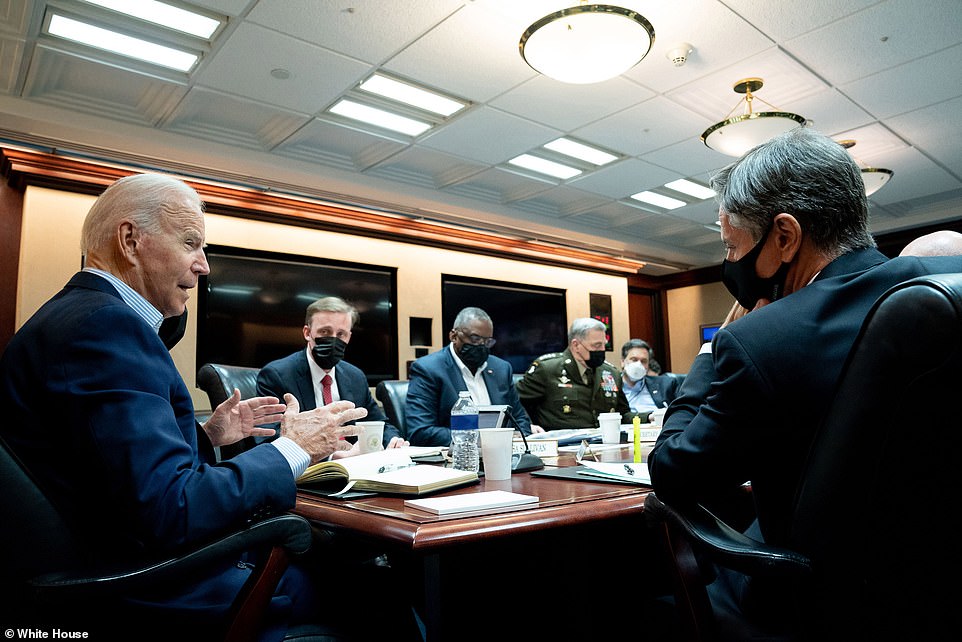 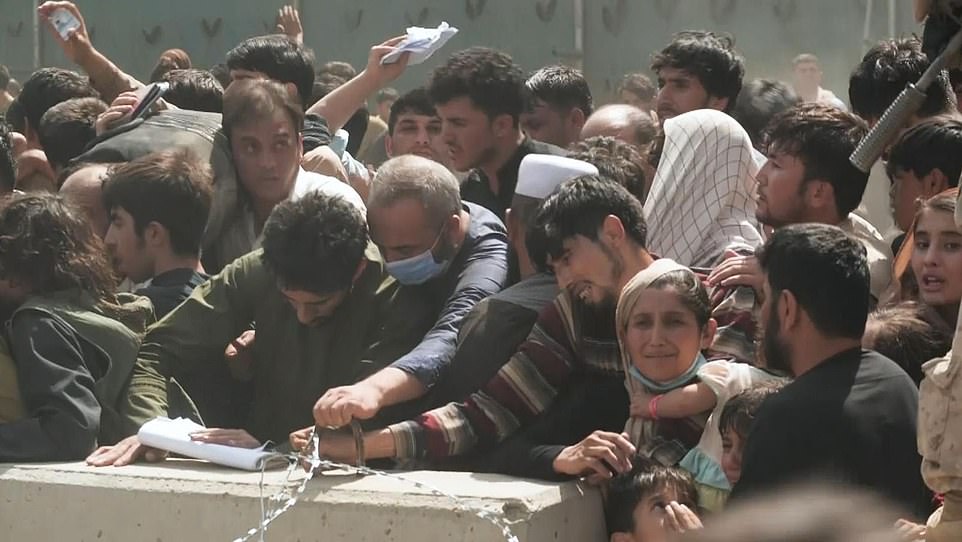 At least seven people have been killed at Kabul airport by stampeding crowds, as thousands of panicked Afghans try to flee the country, the British military said on Sunday 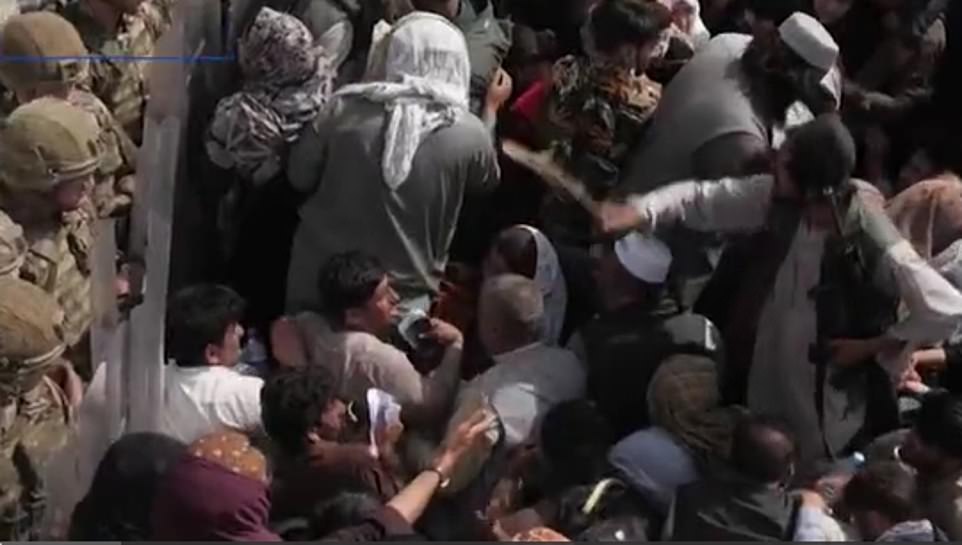 Afghans trying to flee are surrounding Kabul airport where the Taliban are using live rounds and beatings to maintain order. Americans were told not to try to reach the airport on Saturday

It sent out a situation room photograph of Biden meeting with Secretary of State Antony Blinken, Defense Secretary Lloyd Austin and other members of his national security team.

And earlier the Pentagon ordered six U.S. commercial airlines to help move evacuees from temporary sites outside of Afghanistan.

‘Our first priority in Kabul is getting American citizens out of the situation as quickly and safely as possible,’ Biden said.

‘Any American that wants to get home will get home.’

He also said the government was ‘looking to move our Afghan allies’ out of the country as well, noting that citizens of NATO allies and Afghan allies were amongst the 11,000 individuals evacuated this past weekend.

The president stated that as evacuation efforts are underway he wanted to be clear about three things:  ‘One, planes taking off from Kabul are not flying directly to the United States,’ said Biden, explaining that the planes are landing at U.S. Military bases and transit centers around the world where security screenings will take place for non-citizens.

‘Two, at these sites where they are landing we are conducting scrutiny security screening for everyone who is not a U.S. citizen or a lawful permanent resident.

‘Anyone arriving in the United States will have undergone a background check.’

He also noted that the government will welcome these individuals into the U.S.

‘Three, once screened and cleared we will welcome these Afghans we helped us in the war effort over the last 20 years,’ said Biden.

The Biden administration has given no firm estimate of the number of Americans seeking to leave Afghanistan. Some have put the total between 10,000 and 15.000.

It marked a busier weekend for Biden than last, when he was slammed by allies and opponents for staying at Camp David last weekend as the crisis deepened.

And even international partners such as the United Kingdom have voiced their frustration this weekend at the way Biden pushed ahead with such a rapid withdrawal.

A former U.S. ambassador to Afghanistan said the hasty retreat would embolden enemies, including terrorist groups.

‘It has damaged our alliances, emboldened our adversaries and increased the risk to our own security. It has also flouted 20 years of work and sacrifice,’ said Ryan Crocker in a New York Times essay.

This week Biden will join a virtual meeting of the G7 to discuss cooperation between the nations as the Taliban overruns Afghanistan, White House Press Secretary Jen Psaki said in her statement on the upcoming meeting.

‘The leaders will discuss continuing our close coordination on Afghanistan policy and evacuating our citizens, the brave Afghans who stood with us over the last two decades, and other vulnerable Afghans,’ Psaki’s statement reads. 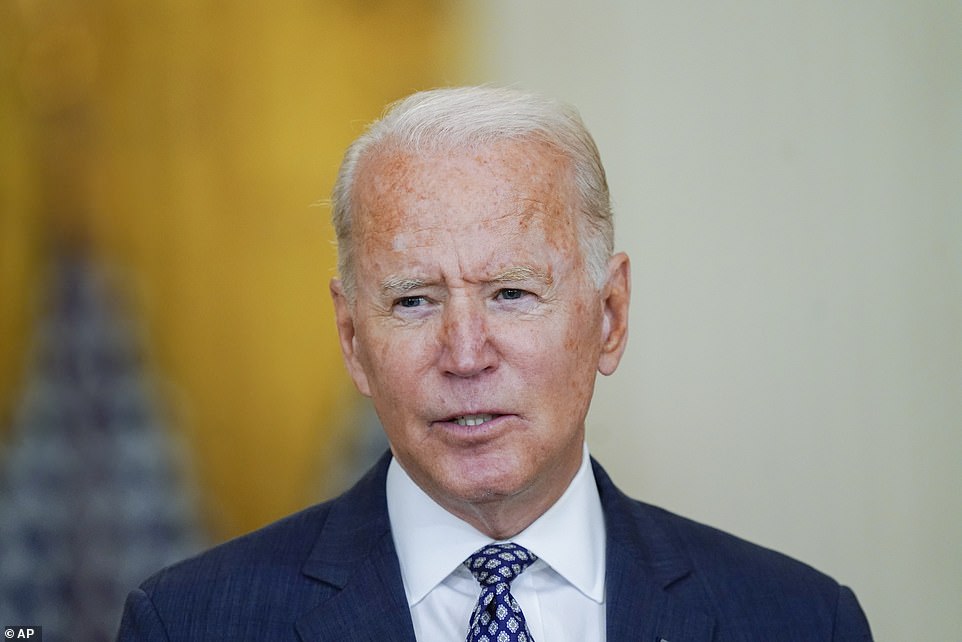 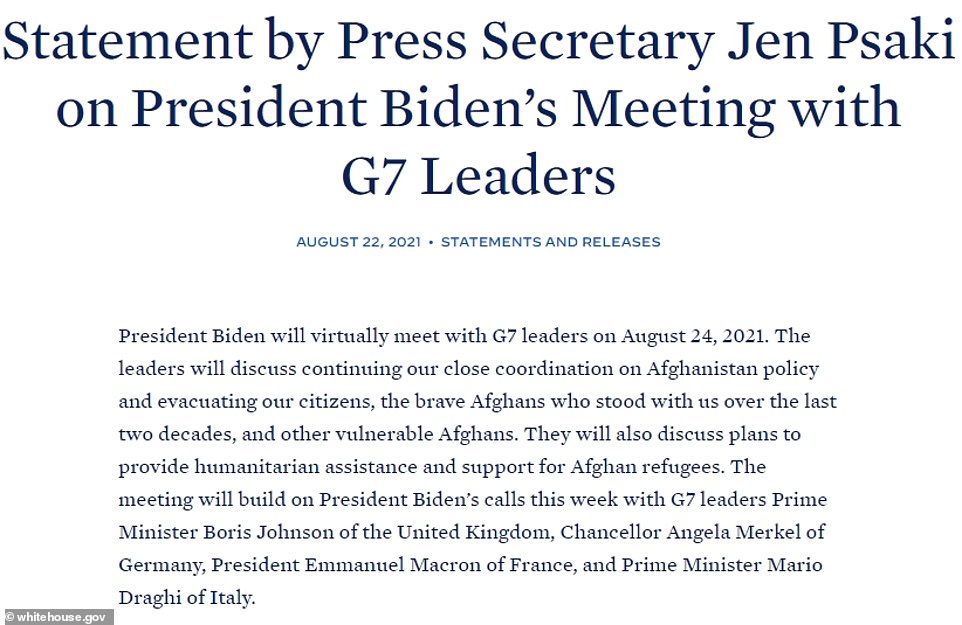 The call comes after Biden received a slew of backlash last week for not talking with any world leaders in the aftermath of the Taliban takeover. Hours after reports came out attacking him for his inaction, Biden spoke with Johnson.

On Sunday afternoon, Biden will deliver remarks on Afghanistan – and Hurricane Henri response – at the White House.

Britain currently holds the rotating leadership of the G7 and announced earlier on Sunday that it called for the group to meet virtually this week.

The meeting comes as chaos in Afghanistan continues to unfold, and nations scramble to evacuate their citizens from Kabul.

So far, Biden has sent in 6,000 U.S. troops to Afghanistan to help with evacuation efforts after the Taliban was able to take over the country in just over a week. This means the U.S. has deployed more troops into Afghanistan than the number of American citizens it has extracted from the country since the Taliban swept into power on August 14.

The Pentagon said Saturday they were only able to evacuate 2,500 Americans from Kabul in the past week.

Overall, the U.S. was able to evacuate 7,000 people from the pandemonium at the Kabul airport since last weekend, including 3,800 in the last day.

Up to 15,000 Americans still need to be evacuated and the administration hopes to get out 50-60,000 more Afghan allies and their families.