Discussions on how to include this plan in the massive welfare and social spending budget, disguised as a so-called ‘human infrastructure’ bill, are brand new and will be worked out in the coming weeks, according to the three Hill sources familiar with early talks.

Many Democratic lawmakers who supported President Joe Biden’s complete withdrawal from Afghanistan are now scrambling to find a way to help women, children, interpreters and other vulnerable individuals fleeing from the country.

Biden doubled-down on his withdrawal and the decisions made in the aftermath, which saw the swift Taliban takeover of Afghanistan – including the capital city of Kabul on Sunday.

Lawmakers and political pundits on both sides of the aisle have bashed Biden’s decisions surrounding the withdrawal, while a poll released Monday showed nearly 70 per cent of likely primary election voters disapprove of the president’s handling of Afghanistan.

While progressives and others within the party do fundamentally agree with Biden’s decision to withdraw all troops from Afghanistan, they are also aware of the massive damage it has done to the region and are calling for Washington to allocate funds and resources to help resettle refugees.

An aide of a progressive Democratic member in the House said they are pressing the administration to hand over a plan for evacuations from Afghanistan within the next day as images of chaos at the Kabul airport continue to emerge. 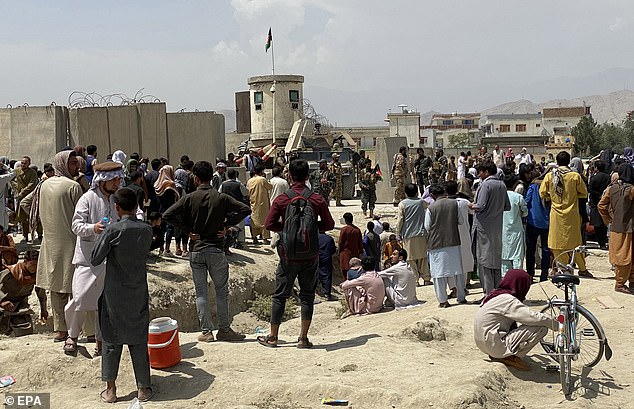 Some Democratic lawmakers are looking to include a plan in the $3.5 trillion budget resolution to help resettle refugees fleeing from Afghanistan amid the Taliban takeover. Hundreds of Afghan citizens gather at the Hamid Karzai International Airport in Kabul on Tuesday to try and get on an evacuation flight 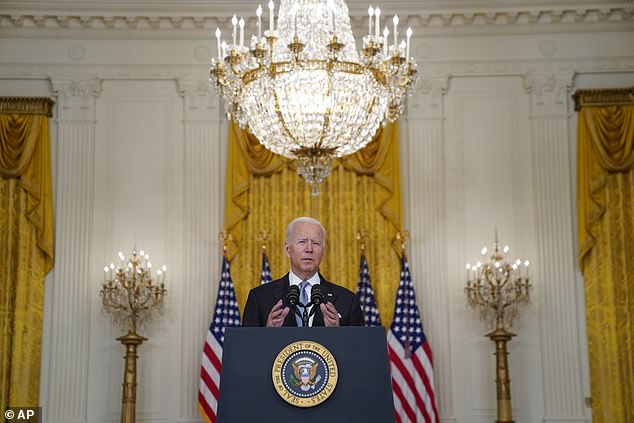 Democrats, according to a Tuesday report, are also demanding a comprehensive plan from President Joe Biden on evacuations from Afghanistan within 24 hours

State Department Spokesman Ned Price told Americans still stranded in Afghanistan on Monday to shelter in place rather than head to the airport for evacuation.

He said the U.S. was still working to ‘regain positive control’ of the airport after it was overrun by Afghans trying to force their way onto flights out of the country.

‘The situation is evolving quickly and we will communicate information to U.S. citizens as rapidly as possible,’ Price said during a press conference on Monday afternoon.

‘In the meantime,’ he continued, ‘we are asking U.S. citizens to shelter and not to travel to the airport until they hear otherwise from the Department of State.’

Images emerged of Afghans running alongside planes and climbing onto the aircraft as it rolled down the runway. At least three people plummeted hundreds of feet to their deaths after clinging to a U.S. jet as it took off from the Hamid Karzai International Airport in Kabul.

On Sunday, Senator Bernie Sanders demanded America ‘do everything we can’ to get U.S. citizens and allies out of Afghanistan and open border to refugees fleeing the country.

‘Foreign policy matters: After 20 years of U.S. effort, the loss of 2,448 soldiers and a trillion spent, Afghanistan was left with a corrupt government and an ineffectual military,’ he tweeted.

He added: ‘At this moment, we must do everything we can to evacuate our allies and open our doors to refugees.’

Progressive lawmakers, including Senator Bernie Sanders, say it’s the responsibility of the U.S. to help evacuate allies from Afghanistan and open border to refugees fleeing from the country 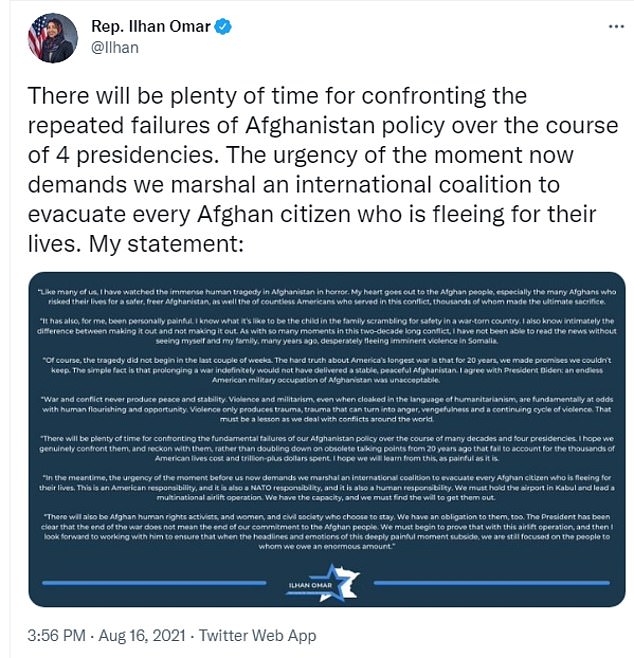 Representative Ilhan Omar, who was a Somali refugee who fled to the U.S., said in a statement the U.S. must help ‘evacuate every Afghan citizen who is fleeing for their lives’

Representative Alexandria Ocasio-Cortez said the U.S. has a ‘moral obligation to the Afghan people’

Representative Alexandria Ocasio-Cortez tweeted on Monday: ‘We have a moral obligation to the Afghan people. The U.S. role in this crisis is indisputable.’

‘We must waste no time or expense in helping refugees safely & swiftly leave Afghanistan. We must immediately welcome them to the U.S. & provide real support as they rebuild their lives,’ ​​she continued in a four-tweet thread.

Fellow progressive member of the so-called ‘squad’ Ilhan Omar also called on the U.S. in a statement Monday to ‘marshal an international coalition to evacuate every Afghan citizen who is fleeing for their lives.’

Omar, who was a refugee herself when she fled to the U.S. from Somalia, was among the first Somali-American, Muslim women to serve in Congress.

Republican Maryland Governor Larry Hogan vowed on Monday to take in more Afghan interpreters to his state than previously planned due to the unfolding crisis – as planes full of those fleeing Afghanistan arrive in Washington, D.C.

Biden is facing harsh criticism from all sides over a lack of comprehensive plan for evacuating those Afghans who risked their lives to help the U.S. efforts in Afghanistan over the last two decades.

House Speaker Nancy Pelosi has vowed not to take up the Senate-approved $1.2 trillion bipartisan ‘real’ infrastructure bill until the $3.5 trillion budget reconciliation is passed.

That effort could now be delayed as some Democrats look to include a plan to help resettle Afghan refugees.