A surfer has turned the sport on its head by performing picture perfect handstands while taking on giant waves – leaving viewers astounded.

Taylor Joseph has only been surfing for four years but he has already taken the sport to another level by riding upside down.

Amazing footage from the 25-year-old’s board shows the water athlete starting his run on both feet before crouching down and placing his palms down and hoisting his legs into the air.

Taylor – aptly known as the Handstand Surfer – then uses his core strength to keep his body completely upright for up to 15 seconds while battling the strong ocean waves.

In one clip the surfer even lowers his legs to 90 degrees before lifting them back up into the air while maintaining his balance.

Taylor, who is originally from Canada but now living in Oaxaca, Mexico, said: ‘I’ve been surfing for fewer than four years and moved into trying handstands quite quickly. I originally used to do it on skateboards and just progressed to the sea from there.

‘It’s taken three years to get to this point. The most difficult part in mastering has been finding good waves with little crowds. 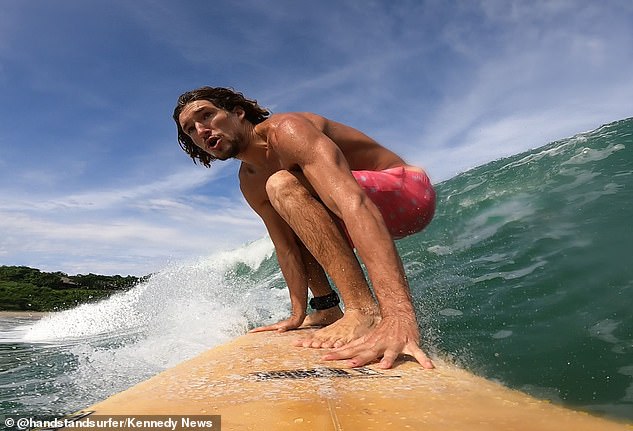 Taylor Joseph, 25, from Canada, has only been surfing for four years but has left people astounded by taking the sport to another level by riding waves upside down 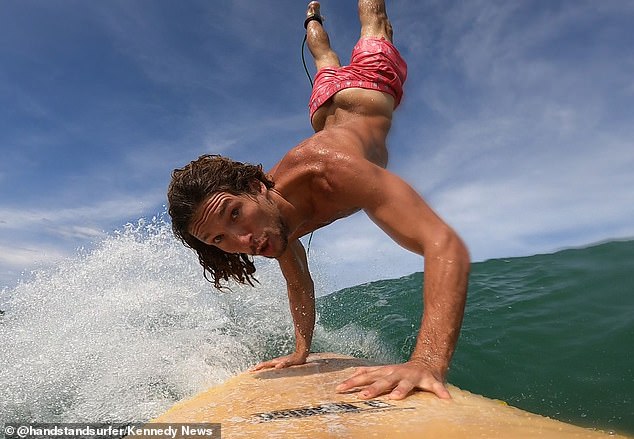 ‘Training involves a lot of bodyweight work and yoga while on the beach, in the forest or at the hot springs. I only surf when bigger waves come in.

‘Recently people have been screaming, smiling, asking me questions and it seems to raise the spirits of everyone who sees it.

‘Handstand surfing is an extreme strength and balance challenge. I’ve noticed that to be able to handstand surf well, I can’t surf too much or I won’t have the strength in my arms.

‘Over the years I have learned how to conserve my energy so I can do more handstands in one surf session. It’s even more tiring on your arms than normal surfing is on your legs.’ 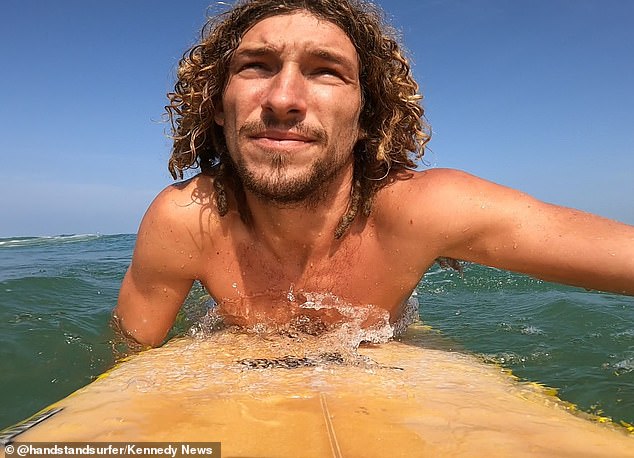 Taylor said: ‘It’s taken three years to get to this point. The most difficult part in mastering has been finding good waves with little crowds’

Taylor’s incredible feat of strength has drawn admiration across the internet, leaving people asking ‘how it’s possible’ and saying he’s ‘not from earth’.

One person said: ‘These guy[sic] are not from earth. Incredible stuff. This is version of brand-X.’

Another person wrote: ‘This should be an Olympic competition. This dude wins the gold medal.’

One commenter wrote: ‘Seriously, how do you do this? You make it look so easy. Like all professional extreme sports.’

Another commenter simply said: ‘How is that possible?’