Workers in Britain are suffering from an ‘epidemic of hidden overtime’ with women 43 per cent more likely than men to be working longer than a standard working week during the pandemic, a study warned today.

Employees are finding they can never quite ‘switch off’ and so continue to work throughout the evening and weekend amid an expectation to ‘stay on’ as the day is extended in fragments, the Autonomy think tank said.

Experts say the issue particularly affects those working remotely – with a lack of clear boundaries between work and leisure in the UK meaning workers are more likely to take calls and respond to emails throughout the evening.

The think tank found that women are 43 per cent more likely than men to have increased their hours beyond a standard working week, and for those with children this was even more clearly associated with mental distress.

Some 86 per cent of women who carry out a standard working week alongside childcare, greater than or equal to the UK average, were said to have experienced mental distress during April 2020 when the Covid-19 crisis began. 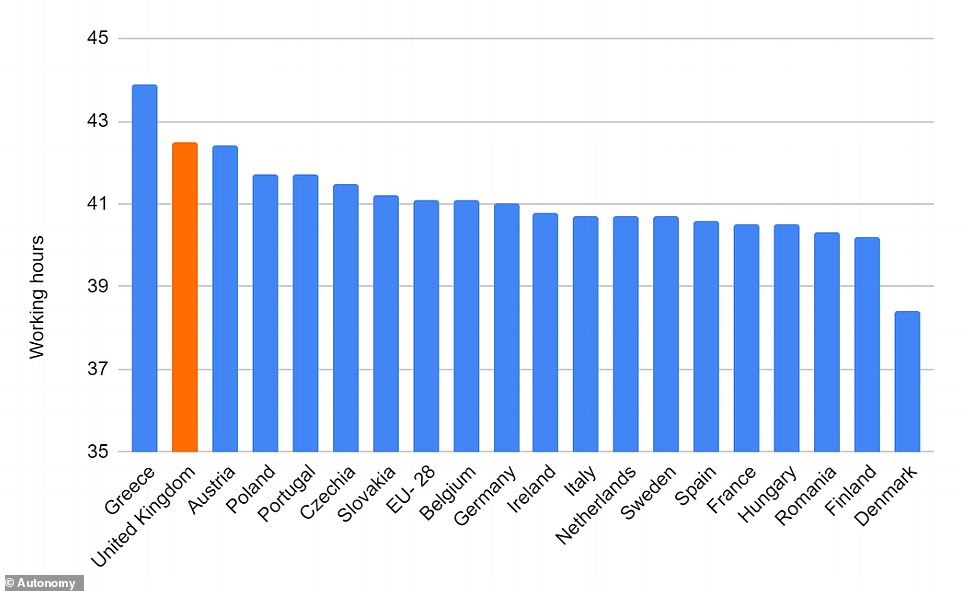 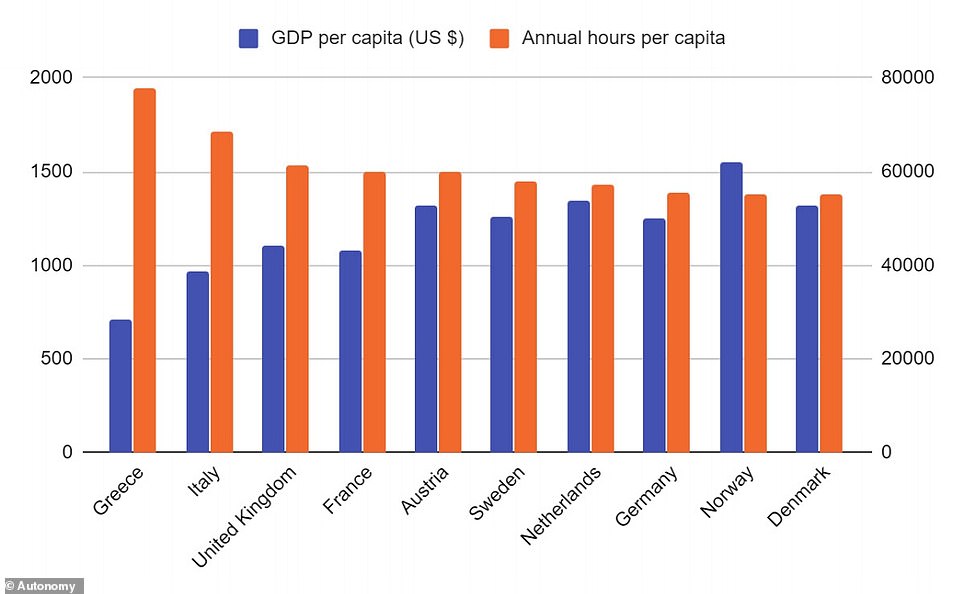 The GDP and annual hours per capita across EU countries are shown in this graph, with the biggest disparity in Greece

New working patterns have placed a greater burden on those carrying out standard caregiving – which again has disproportionately impacted women, according to study by Hampshire-based Autonomy.

Two thirds of workers (65 per cent) whose working week increased beyond a standard 37.5-40 hours and who also carried out active childcare during April at a rate greater than or equal to the UK average reported mental distress.

Rail firms need to be ‘flexible’ as demand for rail returns, says minister

Demand for train travel will return to pre-pandemic levels – even though it is lagging behind the growth in car use, a minister said yesterday.

The number of journeys being made by train is 57 per cent of what it was before Covid, while car use has fully recovered, Department for Transport figures show.

Asked if train passenger numbers will return to normal, rail minister Chris Heaton-Harris replied: ‘I think we will, but I don’t think there’ll be the numbers at the same times of day that there used to be.’

Before the pandemic, the rail network saw a surge in demand from commuters at the weekday morning and evening peaks, but was often quiet during other periods.

Mr Heaton-Harris said: ‘We’re going to be sweating the assets in a very different way. The leisure market is recovering strongly. Probably for the first time in the railway’s history you’re getting as many people travelling on Saturdays and Sundays as during the week – and in lots of places more.’

He also said ‘rail has to compete for its market’ because it was competing with ‘a host of factors’ such as cars and virtual meetings.

He added: ‘We are going to have to be flexible, innovative. We have a resilient, reliable, spotlessly clean railway with excellent people working on it, with great customer service. We need to set about winning our market back.’

By June 2020 more than half (51 per cent) of workers keeping up this level of work alongside childcare were experiencing mental distress. The study said the UK average level of childcare giving is 80 minutes a day.

Data on overtime levels from 2018 found more than five million UK workers put in a total of two billion unpaid hours of work – an average of 7.5 hours a week per worker and £32.7billion of free labour annually.

The report, called ‘The Right to Disconnect’, said: ‘Much of the data on unpaid labour time concentrates on low paid hourly work and labour market violations. But there is a more subtle problem emerging in our digitally connected world – the expectation to be ‘always on’.

‘Modern workplaces and homes are digital spaces. The fact that we are able to send and receive messages, emails, and online content 24 hours a day, seven days a week means that it is increasingly hard to disconnect, enjoy our leisure time and develop a healthy work-life balance.

‘This has created an epidemic of ‘hidden overtime’, where workers never quite ‘switch off’ and continue to do bits of work throughout the evening and weekend.

‘Being ‘switched back on’ by an employer after the working day has finished differs from standard overtime, whereby a worker is usually required to ‘stay on’. Instead, a call from an employer – and the response it requires – expands the working day fragment by fragment, meaning the worker is never quite ‘off’.’

The report also sets out legislation needed to enshrine the ‘right to disconnect’ into British law – calling for two amendments to the Employment Rights Act 1996 to ensure workers have the right to fully disconnect from all work communications outside of work hours.

The new laws are modelled on the French Government’s right to disconnect law which was introduced in 2016. Under this law, French employees do not have to take calls or read emails related to work during their time off.

A survey of 2,000 workers by Linkedin in partnership with the Mental Health Foundation found that a loss of boundaries between work and home life have meant those working from home during the pandemic are working on average 28 hours extra a month.

Will Stronge, director of research at Autonomy, said: ‘The Covid pandemic has accelerated the need to create much clearer boundaries between work-life and home-life. 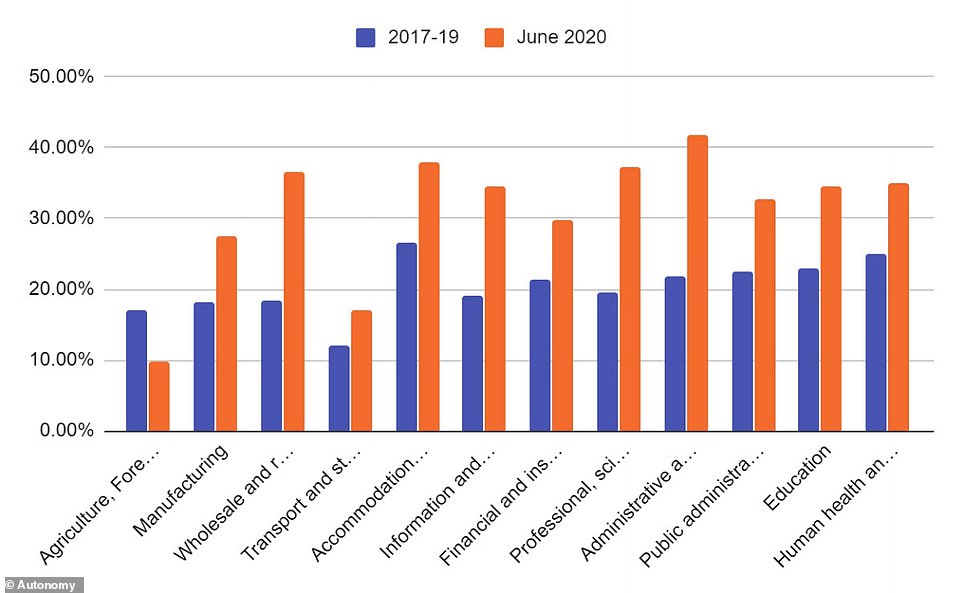 The prevalence of mental distress across industries for 2017-19 and June 2020, three months after the pandemic 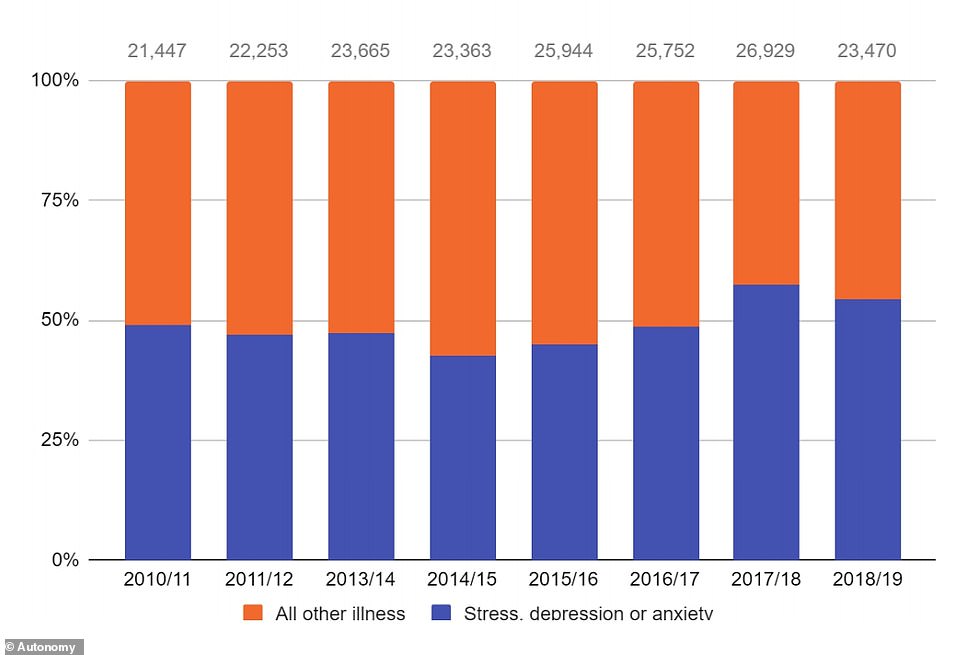 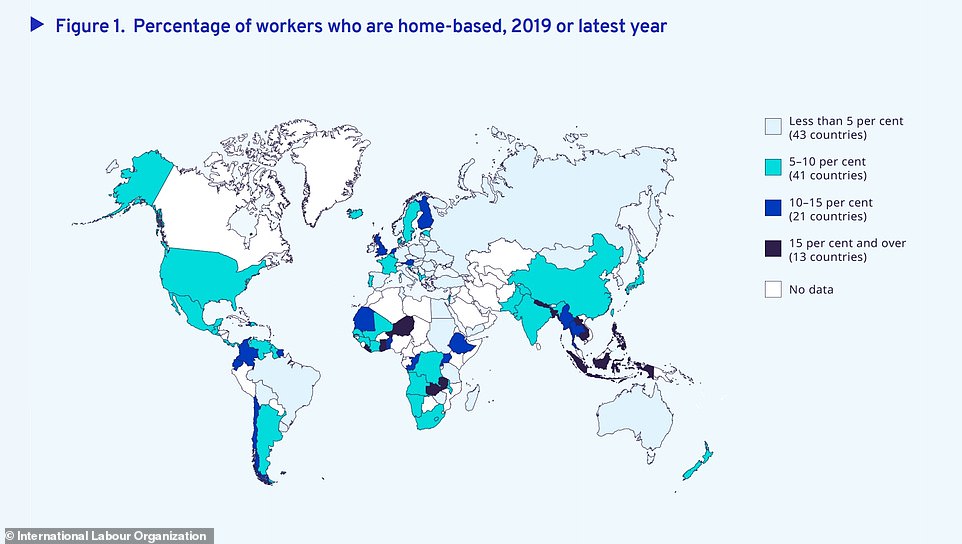 ‘By enshrining a right to disconnect in British law, workers will be able to take back some control of their lives. 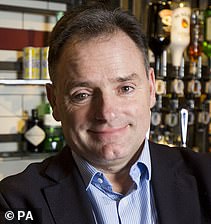 The boss of Marston’s pub chain revealed today that trading is back to 2019 levels with suburban bars performing best – but city centre venues still lagging behind.

The firm, which runs around 1,500 pubs across Britain, added that sales in London were still ‘very weak’ because so many people are still working from home.

And chief executive Ralph Findlay praised the ‘very sensible’ change in self-isolation rules from today which means people who have both Covid-19 jabs will no longer have to isolate if they come into contact with someone who has tested positive.

Around 70 per cent of Marston’s sites reopened in April under outdoor trading restrictions before its entire estate was able to welcome customers again in May.

Mr Findlay added that there was ‘a good cause for optimism in the future’ for the firm which has also been boosted by warmer weather and the Euro 2020 tournament.

‘British workers put in longer full-time hours than most of Europe and action is needed at the level of government to address these fundamentally unsustainable working conditions.’

Angela Rayner, deputy leader of Labour and Shadow Secretary for the Future of Work, said: ‘Alongside the right to flexible working, there must be the right to disconnect. It is only fair that workers are able to establish healthy boundaries, switching off and disconnecting from work outside of working hours.

‘In the modern workplace, we cannot find ourselves in a place where workers are expected to compromise their families, responsibilities or hobbies in order to meet employer expectations.

‘It’s not a sustainable way to run an economy, many good businesses want to see these sorts of protections guaranteed to workers across the board.

And Andrew Pakes, Prospect research director, said: ‘Getting flexible working right after the pandemic has to mean tackling our always-on culture and redrawing the blurred boundary between work and home life and allowing workers to properly switch off from work.

‘Remote working technology creates so many opportunities for how to structure our working life in the future, but it also creates the risk that employees remain shackled to their work through their digital devices, leading to higher levels of stress and burnout.

‘Other countries have already acted to address this by bringing in a Right to Disconnect for workers, and we are calling on the UK government to take action now so that we are not left behind.’

Meanwhile Google is planning to slash the salaries of staff who refuse to return to the office with those who live further away hit harder.

The move is part of a Silicon Valley experiment and will see employees who work from home paid less because of the savings they make on commuting and costs like food.

Though the plans are being considered in the US for the moment, it is thought that Google could later apply them to its London office.

The tech giant is preparing for UK staff to return to the office from October – though it expects about a fifth of staff to continue working from home.