‘Feeling great!’: Carrie Symonds, 33, gets her second Covid jab as she urges other pregnant women to do the same

By Lydia Catling For Mailonline

Boris Johnson’s wife Carrie announced she has had her second coronavirus vaccination while pregnant with her second child.

She took to social media on Saturday to reassure other pregnant women who may be anxious about getting the vaccine that she is ‘feeling great’ and urges others to do the same.

The expectant mother, 33, and the Prime Minister revealed they are expecting a baby before Christmas after losing a child earlier this year. 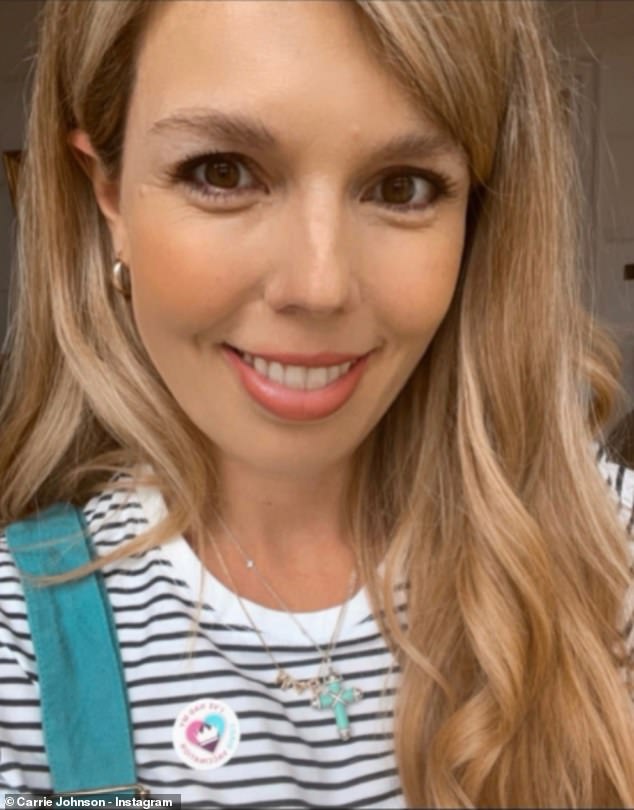 Boris Johnson’s wife Carrie, 33, (pictured on Instagram today) announced she has had her second coronavirus vaccination while pregnant with her second child 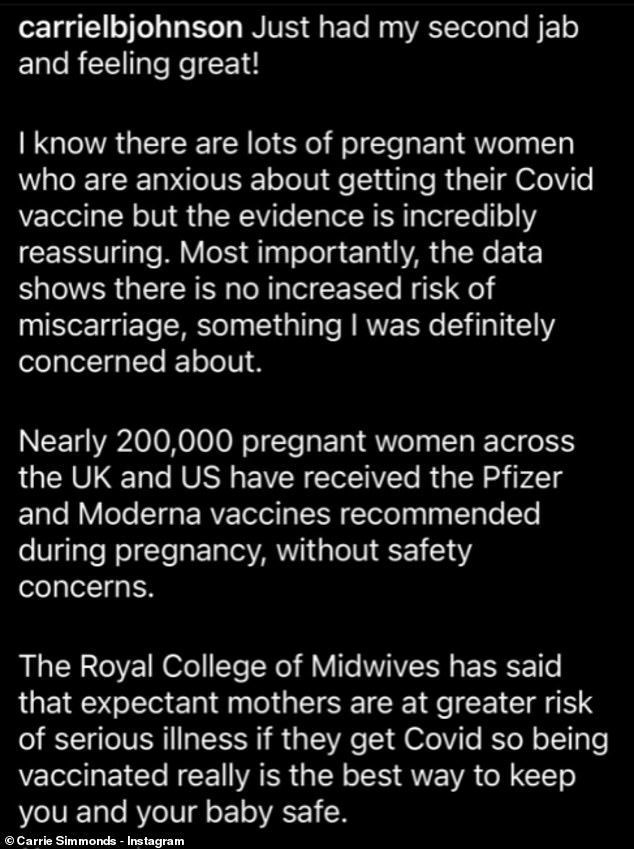 Taking to Instagram this afternoon, she wrote: ‘Just had my second jab and feeling great!

‘I know there are lots of pregnant women who are anxious about getting their Covid vaccine but the evidence is incredibly reassuring.

‘Most importantly, the data shows there is no increased risk of miscarriage, something I was definitely concerned about.

‘Nearly 200,000 pregnant women across the UK and US have received the Pfizer and Moderna vaccines recommended during pregnancy, without safety concerns. 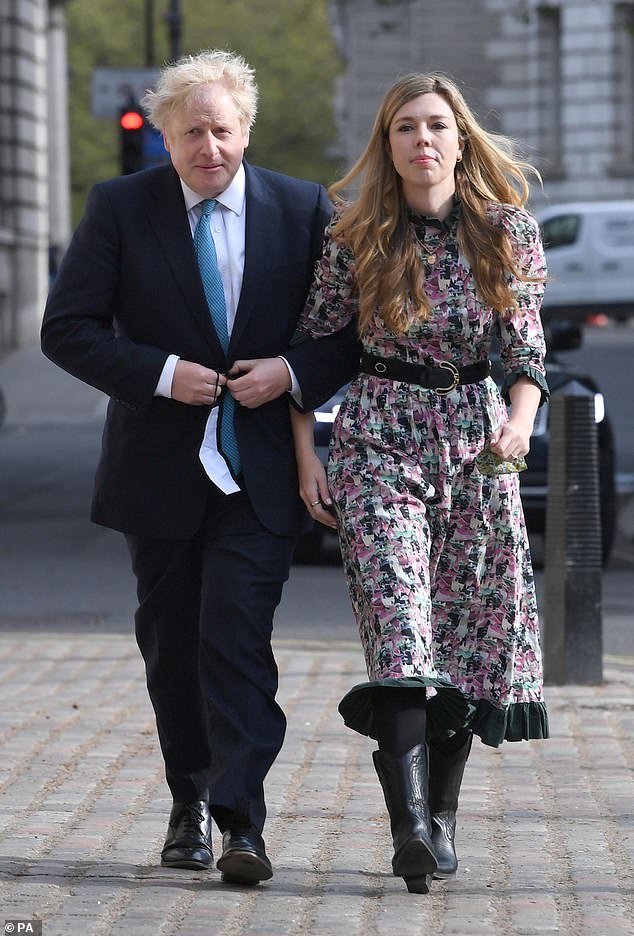 The expectant mother and the Prime Minister revealed they are expecting a baby before Christmas after losing a child earlier this year. Pictured in May

‘The Royal College of Midwives has said that expectant mothers are at greater riskof serious illness if they get Covid so being vaccinated really is the best way to keep you and your baby safe.’

Health chiefs have been urging pregnant women to get jabbed after data in July showed just one in ten people had come forward.

How does coronavirus affect pregnant women?

Severe illness due to Covid-19 is uncommon in pregnant women, but is more likely in later pregnancy.

Pregnant women who do get symptomatic COVID-19 infection are 2 to 3 times more likely to give birth to their baby prematurely.

Women in the UK are advised to get the Pfizer and Moderna vaccines because these vaccines have been given to over 130,000 pregnant women in the US and the data have not raised any safety concerns.

Gill Walton, Chief Executive of the Royal College of Midwives, said: ‘We are seeing increasing numbers of pregnant women being admitted to hospital with serious illness, almost all of whom are unvaccinated.

‘Pregnant women are at greater risk of serious illness if they get COVID, and those with severe COVID are twice as likely to experience a stillbirth and three times as likely to have a preterm baby. Getting the vaccine is the best way to keep you and your baby safe.

‘So often, we mark out pregnancy landmarks in weeks, what size the baby is at 12 weeks or 22. Now we have a new landmark – eight weeks between the first jab and the second.

‘If you have any concerns or any questions, speak to your midwife who will help you make the right decision for you and your baby.’

Rates of Covid hospitalisations were rising rapidly among unvaccinated mothers-to-be.

As of July 23, data showed that so far 51,724 pregnant women in England have received at least one dose, and 20,648 women have had two. At the time around 600,000 women in the UK were pregnant, meaning less than ten per cent have been jabbed.

In a brave Instagram post in July, Carrie told how she and husband Boris were expecting a rainbow baby – a term for a child born to a family that has previously lost another due to stillbirth or death during infancy – in December.

The announcement came two months after her wedding to the Conservative leader when she would have been around two months pregnant.

In a message to followers, she wrote: ‘Hoping for our rainbow baby this Christmas. At the beginning of the year, I had a miscarriage which left me heartbroken.

‘I feel incredibly blessed to be pregnant again but I’ve also felt like a bag of nerves. Fertility issues can be really hard for many people, particularly when on platforms like Instagram it can look like everything is only ever going well.

‘I found it a real comfort to hear from people who had also experienced loss so I hope that in some very small way sharing this might help others too.’

Carrie’s vaccination news comes as she and Boris Johnson have been urged to support three days of paid miscarriage leave for bereaved families after they suffered their own loss.

SNP MP Angela Crawley has introduced a Private Members’ Bill seeking three days paid leave for all those who lose a baby – including if the tragedy takes place before 24 weeks.

Miss Crawley has won support from four parties but not the Conservatives.

She has urged the Prime Minister to use his own experience to back her plan, saying: ‘It could have been an opportunity to consider the impact that [a miscarriage] would have had on other families.’

Currently, a mother is eligible for maternity leave and associated pay if she has a stillborn baby after week 24.