‘Nobody will ever understand why Mitch McConnell allowed this non-infrastructure bill to be passed. He has given up all of his leverage for the big whopper of a bill that will follow. I have quietly said for years that Mitch McConnell is the most overrated man in politics – now I don’t have to be quiet anymore,’ Trump wrote in a Tuesday morning statement.

‘He is working so hard to give Biden a victory, now they’ll go for the big one, including the biggest tax increases in the history of our Country,’ the former president added.

Trump and McConnell, both Republicans, had a falling out once Trump started denying the results of the presidential election he lost last year.

McConnell voted for cloture on the bipartisan infrastructure compromise and is expected to vote in favor of its final passage. 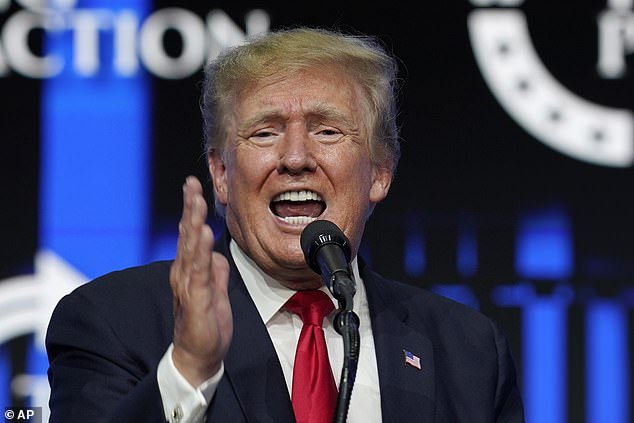 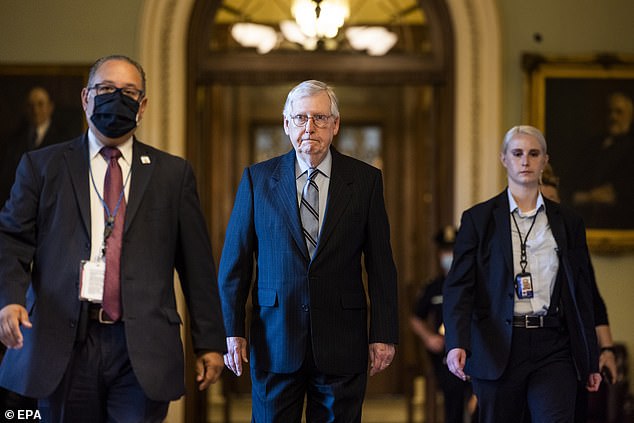 Trump called McConnell (center) the ‘most overrated man in politics’ in a statement the ex-president sent out in advance of Tuesday’s Senate infrastructure vote. The bill is expected to pass with bipartisan support

Punchbowl News reported that Democrats believe McConnnell’s support for the package is an attempt to save the legislative filibuster because it plays against the ‘Senate is broken’ narrative – and there’s a $3.5 trillion spending bill that the Kentucky Republican can rail against.

‘Schumer is using the threat of ‘we can do it the hard way or do it the easy way’ and keeping people in town. McConnell never did that on a real infrastructure bill,’ Trump said.

Especially because Trump’s attempts to pass an infrastructure bill failed.

‘This is not an infrastructure bill, this is the beginning of the Green New Deal,’ Trump said on Sunday.

‘The bill I proposed, which Mitch McConnell couldn’t do anything with, was pure infrastructure,’ he continued. ‘I want what is best for America, not what’s best for the Communist Democrat Party.’

Trump predicted in his Sunday statement that Democrats would use the bipartisan bill for their electoral advantage.

‘This will be a big victory for the Democrats and will be used against Republicans in the upcoming elections,’ Trump said.

Trump also cheered on Sen. Bill Hagerty who had used a procedural maneuver over the weekend to slow the passage of the bill. 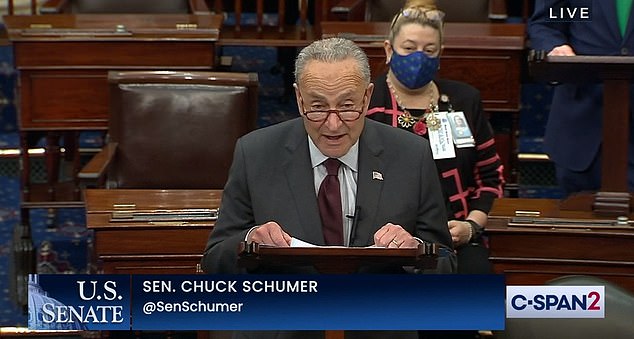 BREAK DOWN OF THE $1.2T BIPARTISAN INFRASTRUCTURE BILL

$110 billion for roads and bridges

$7.5 billion for the first-ever network of charging stations for electric vehicles

$650 billion in funding for the bill comes from existing, planned investments in the country’s roads, highways and bridges

The bipartisan compromise, sure to raise heated debate, proposed using $205 billion in untapped COVID-19 relief aid and unemployment assistance that was turned away by some states

During Trump’s tenure, ‘infrastructure week’ became a punchline because every time the White House would schedule one, some major news event would push it off the rails.

On Tuesday morning, the Senate was poised to pass the $1.2 trillion bipartisan plan, with about 70 votes in its favor expected.

‘Well, it’s taken quite a while, there have been a lot of bumps in the road, but in a few minutes, I will announce that we have come to an agreement for final passage of the bipartisan infrastructure proposal,’ Senate Majority Leader Chuck Schumer said on the Senate floor Monday night.

‘Let me say this, it has taken quite a long time, and there have been detours and everything else, but this will do a whole lot of good for America, and the Senate can be proud it has passed this,’ Schumer added.

After the Senate passes this bill, the upper chamber will turn around and work on a $3.5 trillon budget proposal, which Democrats plan to pass via reconciliation – meaning they’ll only need members of their own party, and Vice President Kamala Harris, to get the bill over the line.

‘After we finish on the bipartisan infrastructure bill, we will move immediately to proceed to the budget resolution with reconciliation instructions and expect to move to vote-a-rama shortly thereafter,’ Schumer explained Monday night.

The Senate is trying to get business done before the traditional August recess.

The House has been out since late July.

When the House comes back into session, House Speaker Nancy Pelosi has said she plans to have lawmakers consider both bills together.

Some moderate House Democrats have called on Pelosi, however, to quickly get the bipartisan infrastructure bill across the line, before considering the larger, more politically tricky $3.5 trillion budget bill.

‘This once-in-a-century investment deserves its own consideration,’ wrote Democratic Reps. Josh Gottheimer of New Jersey and Jared Golden of Maine, among others, in a letter obtained by The Associated Press. ‘We cannot afford unnecessary delays.’

On CNN, Transportation Secretary Pete Buttigieg was asked to respond to House Democrats who wanted to tie the two bills together, which could imperile the bipartisan deal.

‘Well my basic message is – this is good policy and it is good funding. What we’re talking about here represents the most significant infrastructure funding we’ve done in my lifetime and then some,’ Buttigieg said.

‘Of course we believe in the second track too,’ he added. ‘That’s the president’s economic vision.’