Robert Durst told jurors in Los Angeles on Monday that he did not kill his friend, Susan Berman.

‘No,’ Durst said when asked by his lawyer if he killed his friend.

Durst testified that he saw his mother’s motionless body after she jumped off the roof of his childhood home in New York and committed suicide when he was just seven years old.

‘I saw my mother in her night gown on the cobble stone,’ a frail Durst told jurors on Monday.

Durst testified that he blamed his father for his mother’s death even though he was just a child.

He said he ran away from his home because he ‘hated the house.’

Durst’s testimony was put off until Monday after he was originally expected to take the stand in his own defense last week. 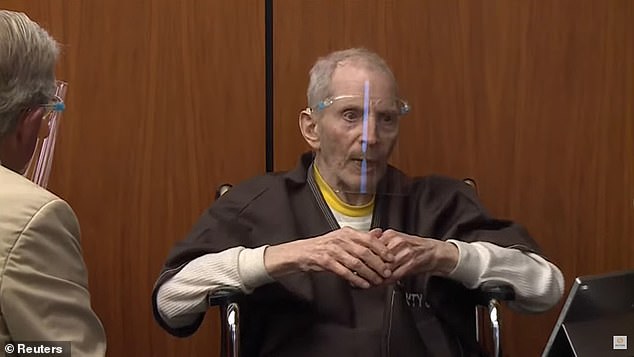 Robert Durst told jurors in Los Angeles on Monday that he did not kill his friend, Susan Berman

The New York real estate heir had been expected to become the rare defendant in a murder case who testifies in his own defense starting on Thursday, but Judge Mark E. Windham said halfway through the day that court was adjourned until late Monday morning, apparently over an issue with a juror.

Durst, 78, is charged with killing his best friend Susan Berman, who was fatally shot in her home in 2000.

He was arrested in 2015, and his trial finally began early in 2020, but the coronavirus forced a pause of more than a year before it resumed in May.

The prosecution rested its case earlier this week.

The first of two planned defense witnesses, false memory expert Elizabeth Loftus, was still undergoing cross-examination when court adjourned, and will be back on the stand, with Durst expected to follow.

It’s considered exceedingly risky for a defense attorney to put their client on the stand in such a case and subject them to potentially damaging cross-examination, and the Fifth Amendment’s protections against self-incrimination allow defendants to avoid it.

But it would be the second time Durst and his attorney Dick DeGuerin have done it. It worked the first time.

DeGuerin called Durst to testify in his 2003 Texas murder trial, where he was acquitted.

Durst was charged with killing his Galveston neighbor Morris Black while in hiding there after Berman’s killing.

He testified that Black was accidentally killed in a struggle after entering Durst’s apartment with a gun.

He admitted to chopping up and disposing of Black’s body. He later pleaded guilty to evidence tampering and bail jumping, but the jury found him not guilty of murder.

While he is charged with just one killing in California, prosecutors at his trial have been allowed to present evidence from the Texas case, and evidence that Durst killed his wife, who disappeared in New York in 1982.

Kathie Durst’s body was never found, but she has been declared legally dead. Durst has never been charged in connection with her disappearance, and has denied having anything to do with it.

He has also denied killing Berman, who prosecutors say was about to talk to police about Durst’s involvement in his wife’s disappearance.

Durst’s attorneys have said that he found her body, panicked, and fled to Texas, sending a letter to police that read ‘CADAVER’ with Berman’s address.

Durst, the scion of one of New York’s most prominent real estate families, gave a series of interviews that included seemingly damning statements about the cases for the 2015 HBO documentary series The Jinx.

Durst will likely take the stand in the county jail attire he’s been wearing in court for the past several weeks, which his attorneys said was necessary because severe health problems make him unable to stand and change into a suit.

Durst has bladder cancer and a urinary tract infection. He has been in a wheelchair and has a catheter inserted.

His hair is shaved short because fluid had to be drained from his brain.

His lawyers have sought delays and a mistrial over his health troubles, but the judge has rejected them all, expressing sympathy for Durst’s state but emphasizing that jail doctors have declared him fit for trial.