A dairy farmer has come out in support of doomed Alpaca Geronimo after 95 of his cattle were slaughtered one-by-one over Bovine TB.

Tony Brunt, 71, barricaded himself into his farm near New Quay, Cardiganshire, in May this year in a bid to save Mary, a three-year-old pregnant heifer, condemned to die by Government ministers.

He was hoping to fight it out in court but a team of 16 vets, officers from the Dyfed Powys Police Rural Crime Unit, agriculture officials and slaughtermen turned up at his remote West Wales farm along with a marksman armed with a high-powered rifle.

Mr Brunt said: ‘If they are prepared to go to those lengths what chance does the Alpaca stand? They are killing perfectly healthy animals based on inaccurate testing – I’m fed up with it.’

He decided to put up a fight after 94 of his shorthorn cattle were slaughtered over four years at his farm.

Mr Brunt had parked a tractor to block off the farm entrance and hid Mary on the farm – not even telling his wife where she was to avoid her having to lie to the agriculture officials. 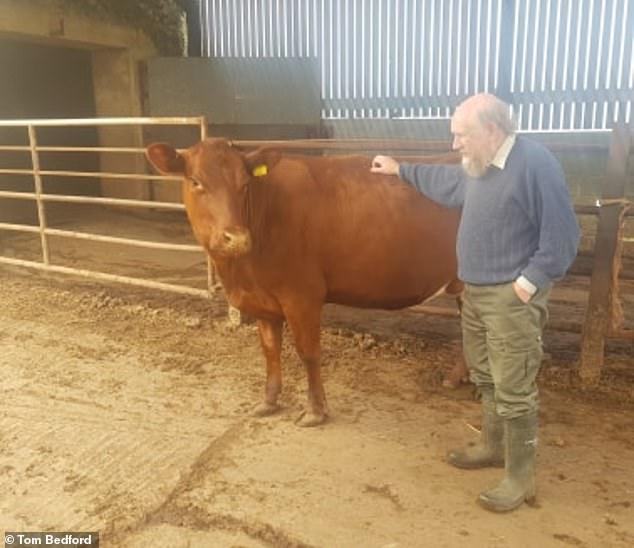 Tony Brunt, 71, barricaded himself into his farm near New Quay, Cardiganshire, in May this year in a bid to save Mary, a three-year-old pregnant heifer, condemned to die by Government ministers (pictured: Mr Brunt and Mary) 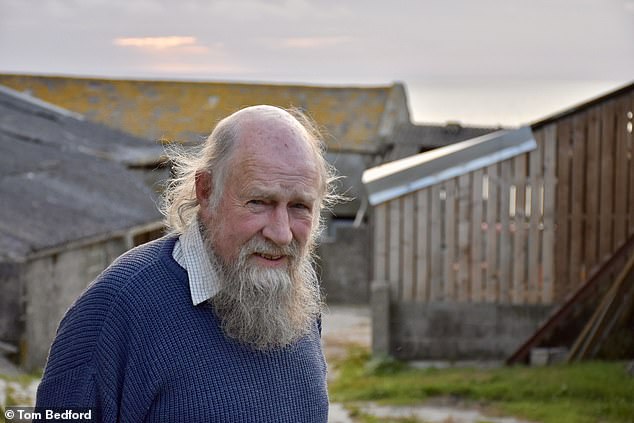 He was hoping to fight it out in court but a team of 16 vets, officers from the Dyfed Powys Police Rural Crime Unit, agriculture officials and slaughtermen turned up at his remote West Wales farm along with a marksman armed with a high-powered rifle 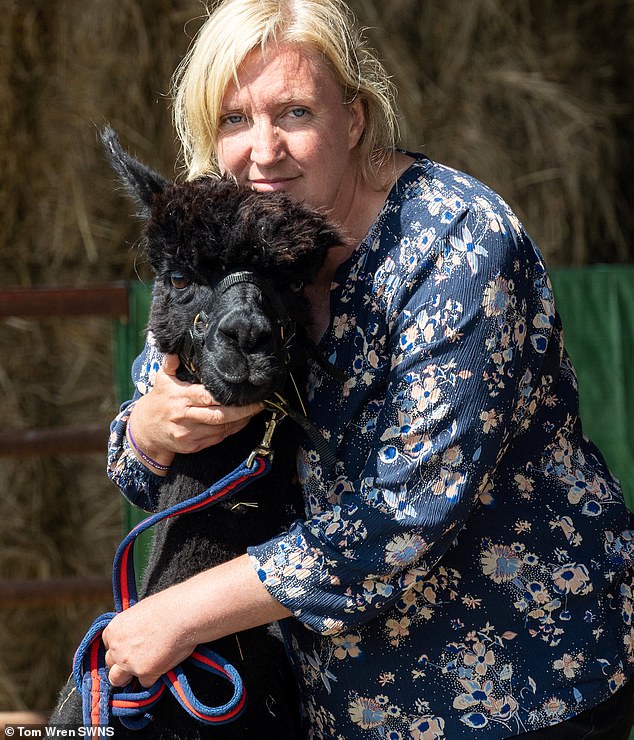 But at 7am on the morning of May 26 the couple were woken by the roar of vehicles coming into their farmyard.

Mr Brunt said: ‘I was still in my pyjamas, they hammered on the door and demanded I told them where Mary was. I said: ”Why would I do that?” If I told them I wouldn’t be doing my job as a farmer to look after her.

‘There were so many vehicles in my yard, I lost count. It was a big operation for just one cow – it was overkill and heavy-handed in my opinion.’

The team from the Animal and Plant Health Agency began searching the 250-acre Coybal Farm for Mary who was tagged with a tell-tale plastic identity clip on her ear.

Tony, who has coronary heart disease, said: ‘We had to stay in the farmhouse while they searched, I knew it wouldn’t be long before they found her.

‘She was shot by a marksman with a rifle, she was due to have her second calf in September.’

Mr Brunt’s wife Heather, 69, said it was ‘disgraceful and insensitive’ that Mary was killed in front of other cattle causing them great distress.

Mary, whose lineage goes back more than 50 years with the Brunt family, was loaded onto a trailer and taken away to the local knackers yard. 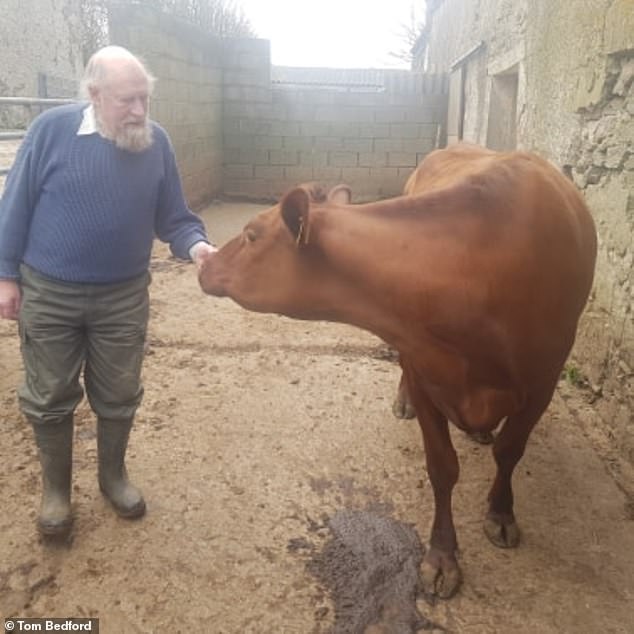 Mr Brunt, pictured with Mary, said: ‘If they are prepared to go to those lengths what chance does the Alpaca stand? They are killing perfectly healthy animals based on inaccurate testing – I’m fed up with it’

A post mortem examination on her carcass revealed Mary didn’t have bovine tuberculosis. Tony and Heather were not surprised, their beloved animal had three inconclusive TB skin tests and five negative blood tests for the disease.

Geronimo’s owner Helen McDonald is also convinced her four-year-old alpaca is free of TB after being tested in 2017.

Father-of-three Mr Brunt said: ‘I don’t hold out much hope for the lady’s alpaca but she has Chris Packham and public opinion on her side so who knows?

‘I hope the animal is saved but I don’t think that will happen if our experience is anything to go by.

‘The best thing she can do is keep filming it – they won’t turn up and kill the alpaca if there are cameras there.

‘We tried to do that to save Mary but they would not let us take photographs, in fact they wouldn’t let us anywhere near when they killed her.’ 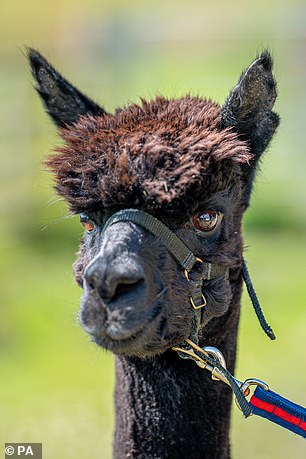 Geronimo the alpaca at Shepherds Close Farm in Wooton Under Edge, Gloucestershire

The couple once had 400 cattle at their farm overlooking the Irish Sea but they are down to 150 due to Government policy on bovine TB.

They get financial compensation but nothing has come through so far for Mary and the healthy calf that died with her.

The Brunts face losing more of their herd when Welsh Government vets return to the farm later this week to test remaining cattle.

Mr Brunt said: ‘We are being treated like dirt but we have to be realistic, and expect some of the cows to test positive for TB.

‘I’m not impartial in this. The Government doesn’t want livestock in Wales and they are taking this course. That’s my opinion, some people won’t agree.’

Bovine TB has become a hot-button issue in rural areas of the country, with farmers calling for more government action to tackle the disease in wildlife.

Welsh first minister Mark Drakeford had earlier this year said the ‘single biggest reason’ for a rise in TB levels in parts of the country with low risk was farmers ‘buying infected cattle and bringing them into the area’.

Abi Reader, who manages a dairy farm in Glamorganshire, south Wales, told Farmers’ Weekly in July that she had lost 42 cows due to TB.

She said: ‘I was accredited TB-free for nine years, and suddenly I am down with TB and have gone into enhanced testing. I cannot quite believe how I have got here from such a low area.

‘There is a big wildlife problem, especially in west Wales. The Welsh government needs to be a little bit bolder and have a go at a badger population cull like they have done in England.

‘The testing is also not good enough. We are all suffering and that would include members of the government. They are not doing enough really.’

Organic dairy farmers Dai, Sharon and Llŷr Miles, who are based in Haverfordwest, Pembrokeshire, said their farm had gone down with TB for the first time in three years following a positive test from a first-calving heifer.

Llŷr said it was ‘not just cows with TB’, adding: There is nothing being done to address the problem in the wildlife reservoir.

‘Let’s not forget that countries such as France and Germany are able to maintain bovine TB incidence levels close to zero, and the Republic of Ireland has been able to halve TB incidents through proactive badger culling.’