Senate Minority Leader Mitch McConnell on Thursday told Democrats they could expect no help from Republicans if they tried to raise the debt limit as part of their ‘reckless plans’ for a $3.5 trillion ‘spending spree.’

It sets up a fall battle between Republicans and Democrats over the nation’s borrowing limit and President Biden’s domestic agenda.

McConnell delivered his promise just before the Congressional Budget Office revealed that the $1.2 trillion bipartisan infrastructure plan currently before Congress will not pay for itself, instead adding $256 billion to deficits over the next 10 years.

That could provide a wrinkle in Democrats’ plans as they battle demands that the measures be fully paid for.

And it is only the first package proposed by Democrats, who next want to pursue a $3.5 trillion, 10-year plan to strengthen social and environment programs.

‘If our colleagues want to ram through yet another reckless taxing and spending spree without our input, if they want all this spending and debt to be their signature legacy, they should leap at the chance to own every bit of it,’ said McConnell on the Senate floor.

‘Let me make something perfectly clear: if they don’t need or want our input, they won’t get our help.

‘They won’t get our help with the debt limit increase that these reckless plans will require.’ 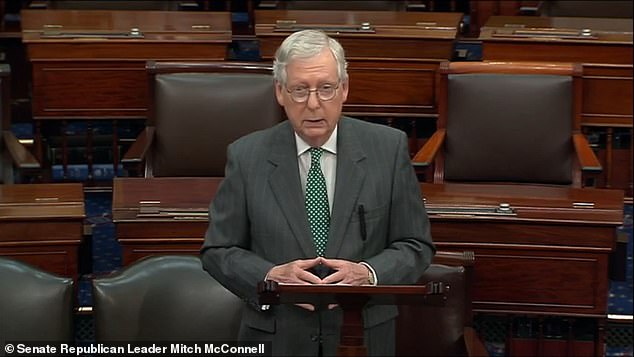 Sen Minority Leader Mitch McConnell told Democrats they could expect no help from Republicans in raising the debt ceiling to enable them to afford a $3.5 trillion spending plan 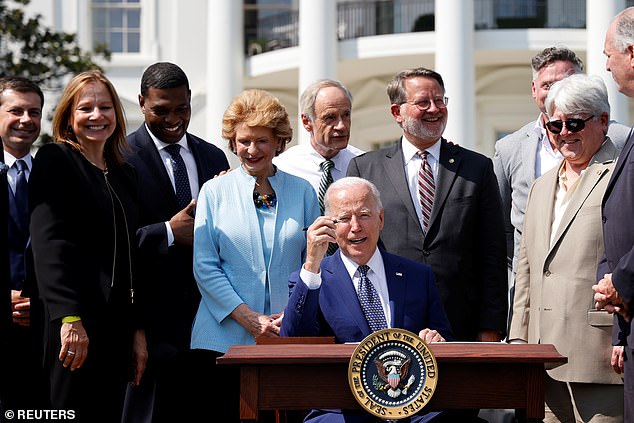 President Biden signed an executive order promoting the sale of electric cars and trucks on Thursday. Much of his domestic legislative agenda is tied up first in the $1.2 trillion bipartisan infrastructure bill before Congress and a $3.5 trillion spending plan, which will need a hike in the debt ceiling to become reality

The Kentucky Republican has been vocal in his opposition to Democrats’ plans.

But his latest remarks make his strategy clear: Force Democrats to take the unpopular step of deepening the government’s reliance on debt or trim back President Joe Biden’s sweeping domestic spending plans.

That would leave Republicans facing a decision to either support the bill or risk a debt default and government shutdown.

If they want it they should do it themselves, said McConnell, pointing out they had the congressional tool of ‘reconciliation’ that meant they did not need Republican votes.

‘Democrats are about to tell Republicans to go take a hike and start teeing up trillions more dollars in borrowing and spending without a single Republican vote,’ he said.

‘But at the same time they’re extolling the virtues of their latest socialist shopping list, they are afraid to up the limit on their credit card.’

If the government loses access to fresh money, it could prompt a federal default, which has never occurred. Analysts have said that could badly wound the economy, perhaps over the long term, forcing up interest rates and federal borrowing costs.

But moderate Democrats have expressed concern at increasing the debt when the federal tab is already more than $28 trillion.

Democrats must now see whether the Congressional Budget Office’s ‘score’ of the bipartisan infrastructure bill, suggesting it will increase the debt by $256 billion, will put off Republicans

Sen. Rubio has already voted against the bill, but all eyes now will be on whether the CBO score puts off moderate Republicans who had backed the bipartisan plan

Federal borrowing has grown at record rates amid programs aimed at supporting the pandemic-battered economy.

And the clock is ticking. Treasury Secretary Janet Yellen has already warned that the government could run out of money as early as September if action is not taken.

Democrats suffered a possible setback on Thursday when the long-awaited CBO cost estimate revealed that the infrastructure plan would drive up the debt.

They must now see whether any moderate Republicans withdraw their support for the bill.

Sen. Marco Rubio said: ‘The massive infrastructure bill is NOT, as its authors claim, “fully paid for.”’

The Senate has processed nearly two dozen amendments to the 2,700-page bill, a rare legislative undertaking, with more on tap.

But none has substantially changed the framework of the public works package, which would send money for roads, bridges, water works, broadband and other projects to virtually every corner of the nation, and is a first phase of President Joe Biden’s infrastructure priorities.