This is the moment a subway hero leaped onto the tracks to save a man in a wheelchair who had rolled off the platform.

Cellphone video captured by a bystander at the Union Square station in Manhattan, at around 1.15pm on Wednesday, captured the moment a quick-thinking commuter jumped down to help the disabled man.

Other bystanders rushed to help the unnamed hero, who lifted up the disabled commuter as a group helped pull him up onto the platform.

Moments after he was pulled to safety, and his rescuer also jumped onto the platform, the downtown 6 train pulled into the station. 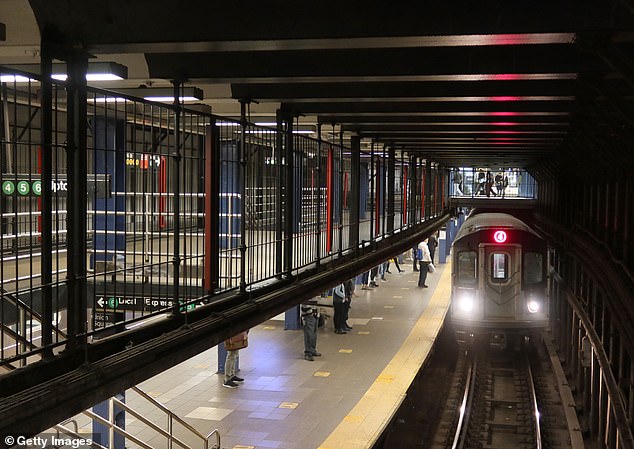 Cellphone video captured by a bystander at the Union Square station in Manhattan, at around 1.15pm on Wednesday, captured the moment a quick-thinking commuter jumped down to help

The unidentified disabled man, in his 30s, was taken to Bellevue Hospital with non-life threatening injuries.

Lauren Mennen, a CBS reporter, who recorded the video praised the rescuer as a ‘hero’.

‘One man jumped right into action. He didn’t think twice whether he was going to go on those tracks,’ Mennen said.

‘I was like, people need this. There’s heroes in action and I was like I’m going to wave my hand at the train and it will all be good. I hope people just take positivity away from all this.’

The video of the heroic rescue effort quickly spread on social media as the dramatic scene shocked and uplifted viewers.

While this incident appears to have been an accident, New York’s subways have become increasingly unsafe during the pandemic.

Felony assaults in the subways nearly doubled from 37 in April to 65 in May, although figures dropped to 14 in June.

The drop came as there were 223 felony assaults recorded in the subway system in the first five months of 2021, which was higher than any year since 1997,  the Post also reported.

They included the horrific, fatal attack on a 58-year-old Asian woman who fell into a coma after being attacked on the New York City subway on July 17.

She died from her injuries 11 days later.