Two men armed with a machete and a tomahawk have stormed a convenience store, threatening customers and staff before fleeing with the cash register.

Both men who wore black hoodies and hid behind face masks were captured in terrifying CCTV footage walking into the store in Whalan, in Sydney’s west and flailing their weapons around on Monday evening.

The man holding the tomahawk was seen threatening a female customer while pushing her down on the counter.

The pair were then filmed screaming at staff to hand over the money before knocking the till off the counter and ripping the cash register away. 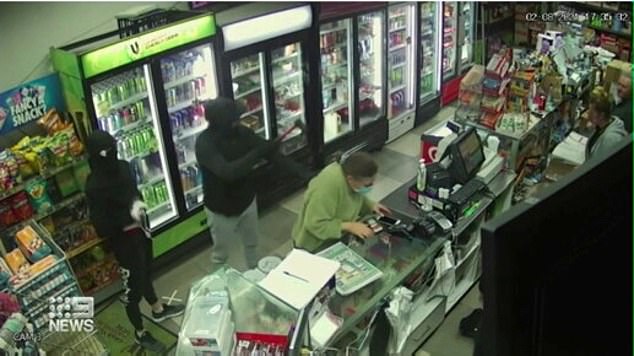 Two armed men stormed the convenience store in Whalan, in Sydney’s west on Monday evening with one threatening a female customer with a tomahawk

They then fled down the street with the cash register which was holding $3,000 inside.

Sophie Adams, who works at the store and watched the horror unfold, said she and her colleagues didn’t take the men seriously at first.

‘Once they pulled out weapons from under their hoods and the waistbands of their pants, we knew,’ she told Nine News.

‘I was trying to hold the till and make sure they couldn’t get it but they started hitting at us.

‘They made off with the till after they made threats to the customer. They held the hatchet against her head so I just let it go.’

NSW Police have confirmed investigations are continuing into the robbery.

Nobody was harmed during the incident. 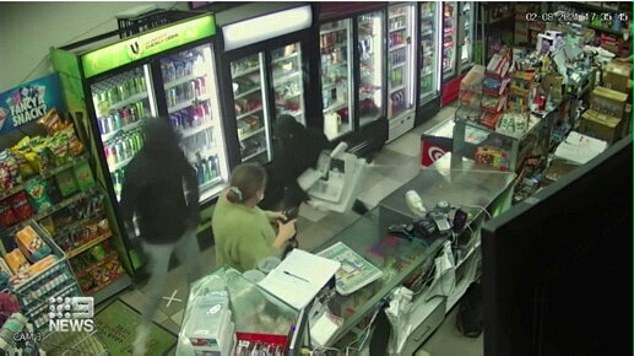 The pair ripped out the cash register which was holding $3,000 in cash and fled down the street