It was the daring sleight of hand that netted more than £4 million in diamonds and was likened to Hollywood heist movie Ocean’s Eleven.

As unlikely 60-year-old femme fatale Lulu Lakatos starts a five-and-a-half-year prison sentence, we reveal the full story behind the audacious 2016 raid on society jewellers Boodles – the largest-value act of shoplifting in British history.

All good heists need an alluring femme fatale, and the mysterious foreign woman responsible for the audacious theft of £4.2 million of diamonds from society jewellers Boodles was one for the ages.

She went by the name of Anna, appeared to be in her mid-50s, and was wearing a sober camel coat, silk scarf and designer hat when she arrived at the quintessentially English retailer’s Bond Street HQ at 11.09am on Thursday, March 10, 2016.

Having met the family firm’s boss, Nick Wainwright, a posh, silver-haired 73-year-old who is renowned in moneyed circles both for his brilliant salesmanship and salmon-pink socks and ties, Anna removed her outer layer of clothing.

Underneath was a low-cut black dress, which barely restrained her ample bosom. 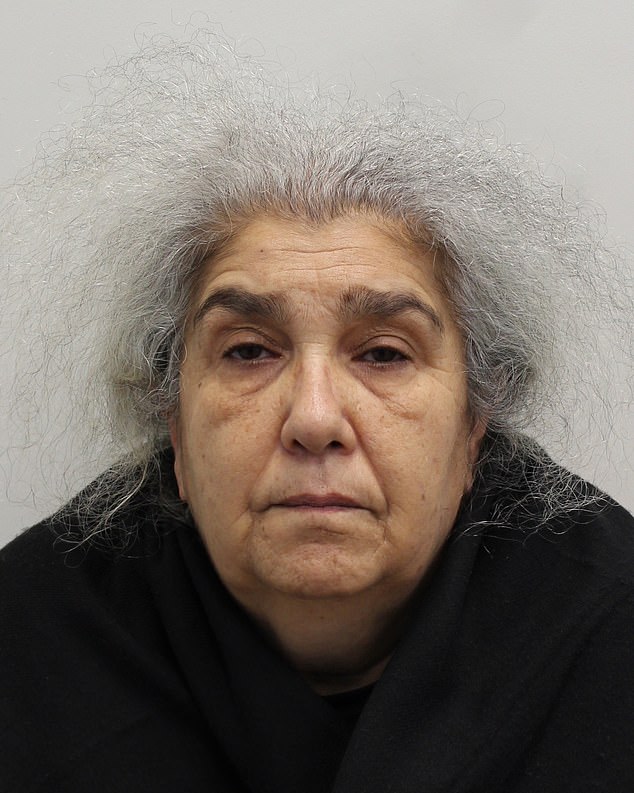 ‘She was most unattractive,’ Mr Wainwright later said in court. ‘She was overweight, she was wearing the sort of thing a Russian dancer would wear. She had enormous boobs.’

Anna’s look was, in other words, garish and perhaps tawdry. But it was also distracting. And that may help explain why, when she and her cleavage sauntered out of the luxury store, neither Nick Wainwright, nor any of his employees, noticed that she had replaced a bag of gems with an identical one filled with pebbles.

The missing loot, which included a stunning 20-carat heart-shaped diamond worth £2.2 million and the size of a Fox’s Glacier mint, had, via remarkable sleight of hand, been secreted in a false compartment in her designer handbag.

It is the largest-value single incident of shoplifting in British history and has been variously compared to the plots of an Ocean’s Eleven film and the 1981 movie, Raiders Of The Lost Ark, in which hero Indiana Jones replaces a valuable golden idol with a bag of sand.

Five years on, the diamonds have yet to be recovered but, with two members of the gang who masterminded the heist behind bars, a jury at Southwark Crown Court spent the past week considering one final question: who, exactly, was the mysterious Anna?

Their verdict, announced yesterday, was that the ice-cool woman’s real name was Lulu Lakatos – crucially, the very individual who happened to be standing in the dock, with frizzy grey hair tied in a ponytail. She was sentenced to five and a half years in prison. 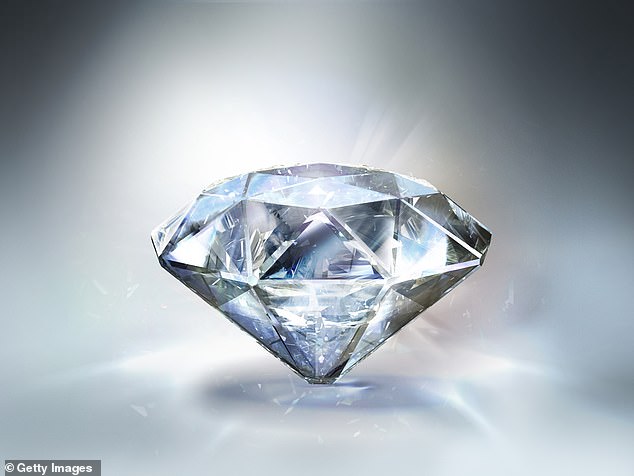 The diamonds have yet to be recovered, but a jury spent the past week asking a final question: who was the mysterious woman, who went by Anna, that stole the loot? (stock image)

The woman (pictured left in Boodles with expert), who went by Anna, replaced a bag of gems with an identical one filled with pebbles without any of the Boodles employees noticing

Lakatos, 60, has an unlikely pedigree for a criminal mastermind. A former cleaner and school catering assistant, she was born in Arad, Romania, to parents of Hungarian ancestry, before moving to France, where she honed her craft stealing clothes from shops and was jailed for a series of minor thefts dating back to 2002.

Working alongside a younger sister named Liliana, she committed offences across France and Switzerland, where Liliana – who appears to have died in a motor accident in October 2019 – was previously wanted over a bank heist that bore remarkable similarities to the ‘Boodles Job’.

Liliana was also a central figure in this month’s trial – thanks to the ingenious defence mounted by Lulu who, before her arrest on a European warrant in September, was living in Saint-Brieuc, a commune in northern Brittany.

Lulu insisted she was an innocent victim of mistaken identity, and the late Liliana was the real owner of the bosom that bamboozled Boodles.

Her defence was helped by the fact that DNA taken from the store showed the femme fatale could have been either sibling, while fingerprints taken from a table could not be matched to Lulu.

The scam dates back to February 2016 when Mr Wainwright was contacted by a ‘Simon Glas’, who said he was interested in buying high-value diamonds as an investment on behalf of some wealthy Russians, and over the ensuing days managed to convince Mr Wainwright to travel to Monaco for a face-to-face meeting with a group of investors, where a deal was struck to buy seven specific diamonds.

However, to verify they were the specified size and quality, the Russians asked for their gemmologist, ‘Anna’, to be allowed to inspect the stones at Bond Street.

Under the arrangement – believed to be relatively common in the gem trade – the stones would be verified by this expert and then placed in a bag which the gemmologist would then padlock shut so its contents could not be tampered with.

Boodles would keep it until the store received a £4.2 million bank transfer, at which point it would be handed over.

‘It’s not the sort of deal Boodles normally do, but Nick [Wainwright] took the view that this was a very good price indeed for those seven diamonds,’ a source with knowledge of the case told me. 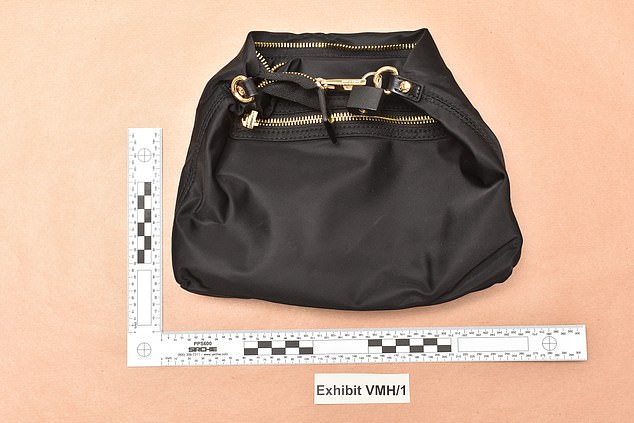 The missing loot, which included a 20-carat diamond worth £2.2 million, via remarkable sleight of hand, been secreted in a false compartment in her designer handbag (pictured) 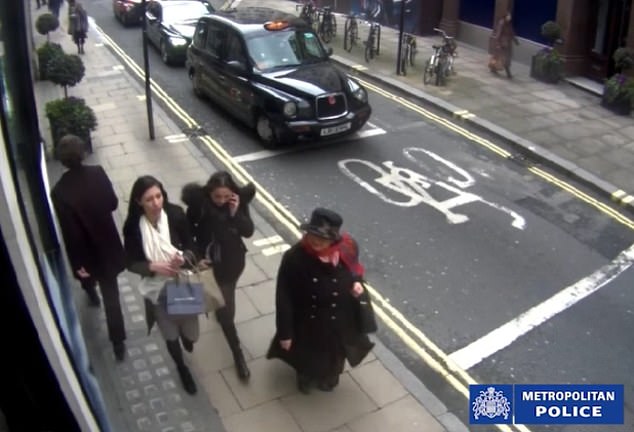 ‘Anna’ left the store shortly after noon and was met by two female accomplices. CCTV footage (pictured) shows her dropping the diamonds into one of their handbags

‘He thought the Russians were seriously over-paying, and had more money than sense. Perhaps that rather blinded him to the fact he was being taken for a ride.’

Police believe the heist involved six accomplices, two of whom – Christophe Stankovic and Mikhael Jovanovic – are already behind bars, having been convicted last year.

They drove to London from Paris in a rented Citroen DS4 hatchback on March 9, entering Kent at 1.15pm. They checked into the Best Western Hotel in Ilford, Essex, with two women.

On the other side of London that afternoon, ‘Anna’ and another woman arrived by train from Paris and travelled to Kilburn, north-west London, where they checked into the Cricklewood Lodge Hotel.

At 8.15pm, ‘Anna’ walked to a cafe, where she met Stankovic and Jovanovic. The trio drove into central London, where they carried out surveillance on the Boodles store and its surroundings.

The following morning, the four gang members in Ilford took a minicab to Bond Street, where they arrived at around 9.30am.

‘Anna’ and her accomplice got a cab to the Willow Walk pub near Victoria Station, where the accomplice waited with their suitcases while ‘Anna’ walked to Boodles in time for an 11am appointment with Mr Wainwright and gemmologist Emma Barton.

She was escorted to the basement, where she sat at a table and weighed the diamonds, before wrapping them in tissue paper, and transferring each one to a small box. They were then placed in the zipped bag, which ‘Anna’ padlocked shut.

At this point, Mr Wainwright began to have suspicions about her behaviour. ‘She didn’t look at the stones through an eyeglass, as a gemmologist might do,’ he told the court. ‘I was watching her like a hawk.’

But Mr Wainwright was then distracted by a telephone call from ‘Alexander’, the supposed Russian buyer. This was Anna’s cue.

‘She watched Nicholas walk up the stairs and as soon as his back was turned on the spiral staircase, she grabbed the bag and stuck it in her handbag,’ Miss Barton told the jury.

‘I said, ‘no, no, no,’ you can’t do that. Please take the diamonds out of your handbag now. In English, she replied, ‘Don’t worry, there’s nothing to worry about’.’

The court heard the locked purse was in her handbag for two or three seconds before it was put back on the table, and then transferred to the store safe.

Now highly suspicious, Miss Barton told Mr Wainwright what had occurred. He searched the bag in what he described as a ‘gentlemanly’ fashion, but found nothing.

‘Anna’ left the store shortly after noon and was met by Stankovic and Jovanovic’s two female accomplices. CCTV footage shows her dropping the diamonds into one of their handbags before returning to the Willow Walk pub. 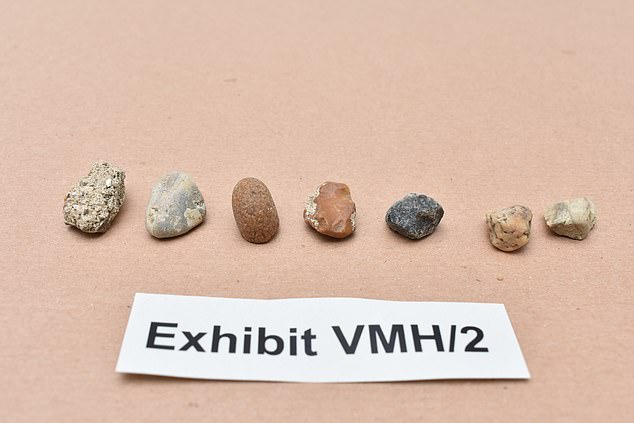 It wasn’t until the next afternoon that Boodles staff realised they had been swindled. When the bag was opened, they saw within seven pebbles (pictured) ‘similar in size’ to the diamonds

She and the accomplice then travelled to King’s Cross and caught a Eurostar train to Paris.

Meanwhile, Stankovic and Jovanovic and the two women hailed separate taxis and asked to be taken to the Gants Hill roundabout in east London.

There they met up, walked back to their hotel, jumped in the Citroen, and returned to France via the Channel Tunnel.

It wasn’t until the following afternoon that Boodles staff realised they had been swindled.

When the promised £4.2 million did not appear, they sent the bag to a specialist facility at Heathrow to be X-rayed, which revealed that something ‘did not appear to be quite right’.

When the bag was torn open, the horrified jewellers discovered that it contained seven pebbles ‘similar in size’ to the diamonds.

It would have been the perfect crime, but for painstaking work by Scotland Yard’s Flying Squad who traced Stankovic through the hire car’s number plate and Jovanovic via his Eurostar tickets. It’s unclear what led them to Lakatos.

As for the stolen diamonds, detectives believe one may have turned up at a Belgian jewellery store around 2017. Its unusual size arose suspicion, but officers were unable to prove it was one of the stolen sparklers because the paperwork did not match.

Boodles, for its part, is thought to remain considerably out of pocket. The company will perhaps think twice about doing business with mysterious Russians and their alluring female associates, however ample their bosom.