An impatient Holden commodore driver has attempted to undercut a huge hauling truck before being jammed against the curb but those who have watched the footage are at odds over who is to blame.

A dashcam video captured on July 24 at about 5.20pm shows the black sedan speeding around a heavy vehicle on Thurgoona drive in Lavington, a suburb north of Albury, NSW.

The truck uses both lanes at an incoming roundabout cutting off the sedan driver and scraping the side of his vehicle.

The commodore is bumped off the road and onto grass next to the intersection, much to the amusement of the man recording.

The vision was posted to Dash Cam Owners Australia and Facebook users in the comment section are split over which driver is in the wrong.

One informed user commented: ‘It’s a b-double… 26 metres long. A semi is 19 metres long. It is law that they both legally use up to two lanes at anytime when required to do so. If they could don’t it would be impossible to negotiate our roads.

‘As a consequence impatient morons who choose to try this manoeuvre will end up educated the hard way.’ 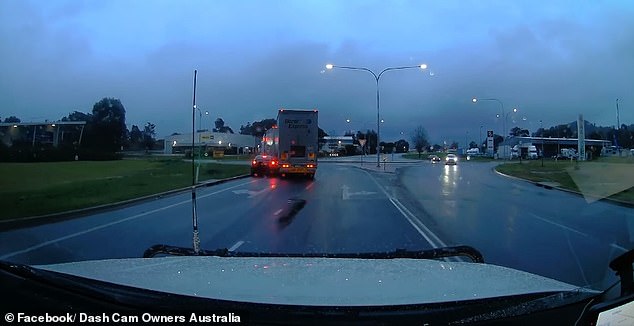 A Holden commodore attempted to undercut a B-double truck, and was cut off as the heavy vehicle used both lanes 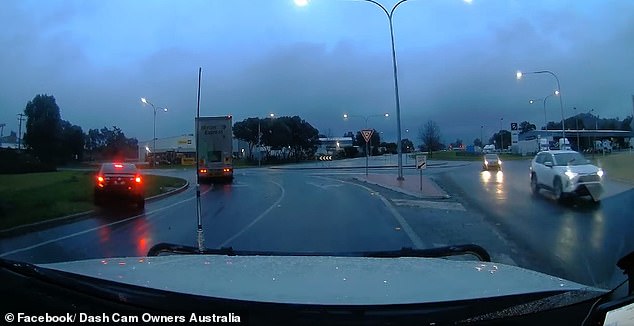 Facebook users in the comment section have argued whether the truck driver or black Holden driver are in the wrong, after the sedan was pushed off the road

A B-double consists of a primary truck, with two semi trailers attached, and a fifth wheel providing extra stability over road trains.

An opposing user added: ‘When travelling straight through a roundabout a vehicle needs to stay in the same lane through the roundabout’.

This comment was quickly flooded with comments from NSW residents well versed in the laws surrounding trucks in the state.

‘By law, if you’re over 7.5m you’re legally allowed to lane share. That’s why there’s signs on the back saying not to overtake when turning,’ a user replied.