A startling new projection suggests that coronavirus cases and deaths in the US could return to levels last seen during the January peak, as the Delta variant first identified in India fuels a massive surge in infections.

As of Saturday, the seven-day rolling average of daily new cases was nearly 50,000, a 166 percent increase from two weeks ago, according to a DailyMail.com analysis of Johns Hopkins data. Meanwhile vaccination rates are plateauing, with just 57 percent of the eligible population fully vaccinated.

It’s a dangerous combination that could be leading the nation toward a new phase of disaster, according to projections released this week by the COVID-19 Scenario Modeling Hub.

‘What’s going on in the country with the virus is matching our most pessimistic scenarios,’ Justin Lessler, an epidemiologist at the University of North Carolina who helps run the modeling hub, told NPR. ‘I think it’s a big call for caution.’

The group combines 10 mathematical models from various academic teams to create an ‘ensemble’ projection, and maps out four different scenarios with variables for vaccination rates and Delta’s transmissibility.

Lesser considers ‘Scenario D’ to be the most likely. It is the worst-case scenario, projecting that vaccination rates top out at 70 percent, and that the Delta variant is at least 60 percent more contagious than the UK Alpha variant.

Scenario D projects a new peak in cases and deaths in mid-October with the most likely case showing around 60,000 cases and 850 deaths each day. At the worst-case end of Scenario D, daily cases hit 240,000 and deaths top 4,000 per day, which would be nearly as bad as the pandemic records set in January. 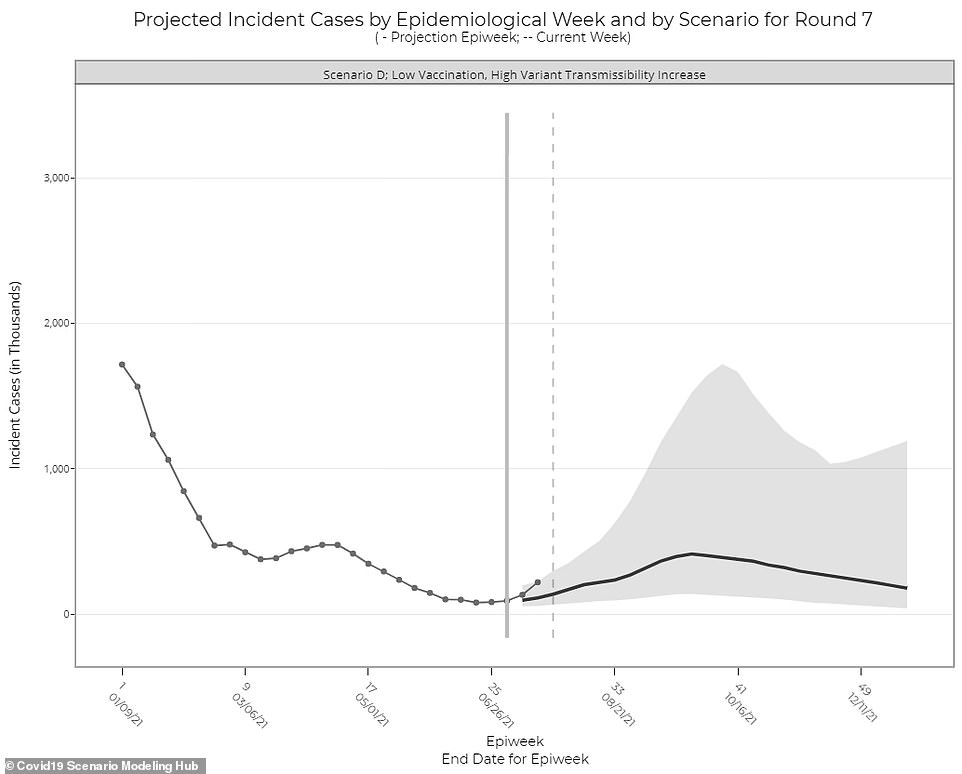 Scenario D from the the COVID-19 Scenario Modeling Hub is now considered the most likely. At the high end, the model projects up to 240,000 daily cases and 4,000 daily deaths by mid-October 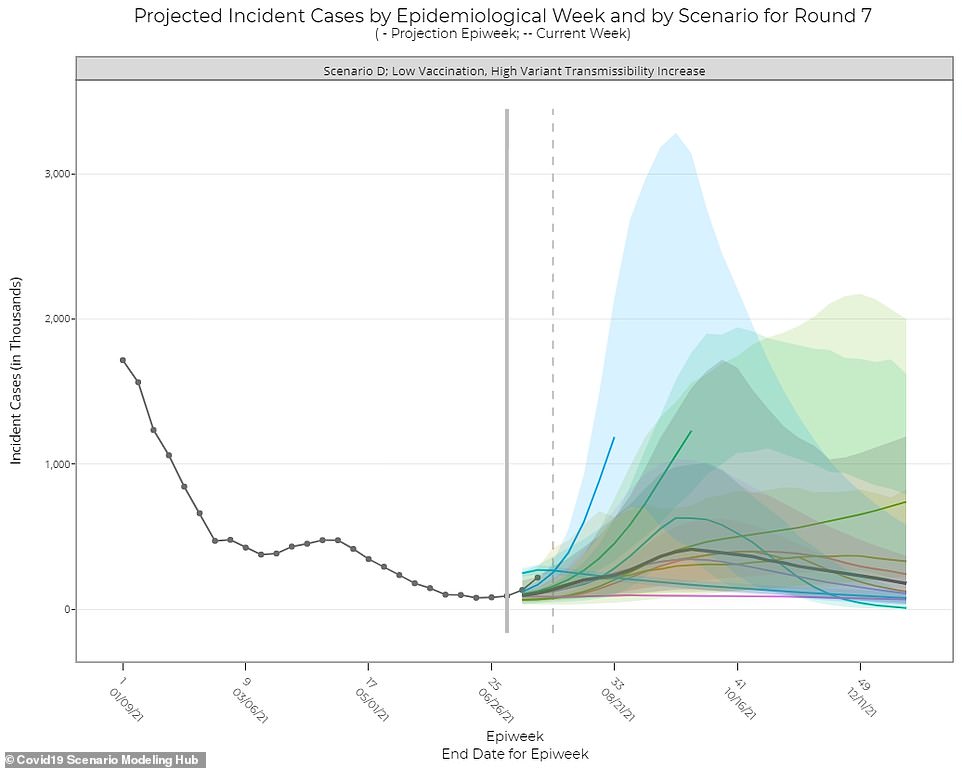 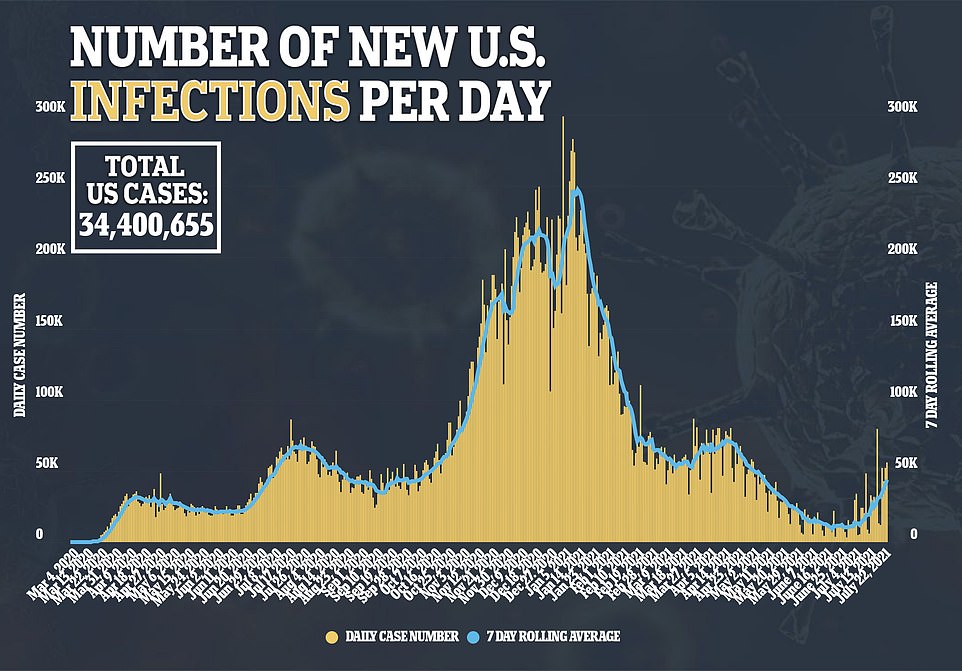 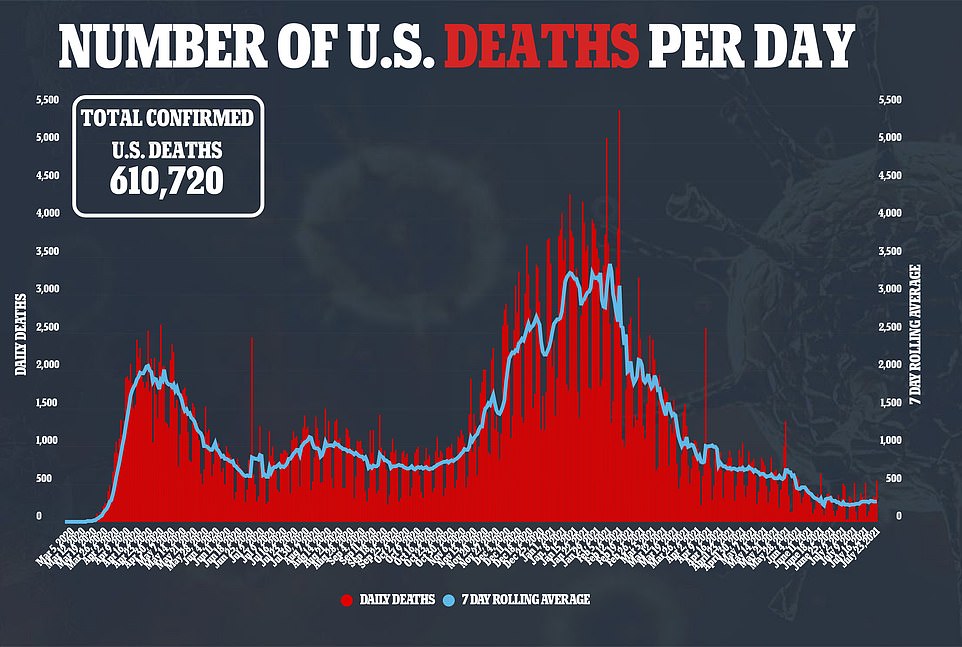 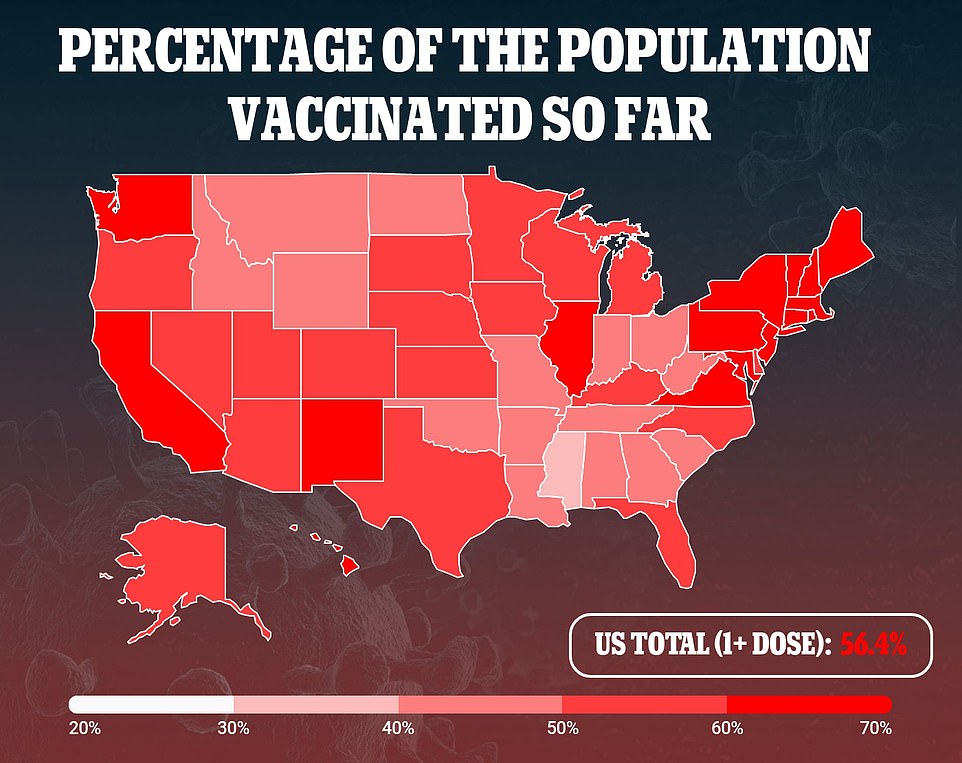 Meanwhile, troubling data from the CDC shows that Delta is spreading faster than prior models suggested, and now accounts for 82 percent of all new cases across the country.

‘Where we are right now is a very different place from where we were a year ago,’ Anne Rimoin, a professor of epidemiology at UCLA, told MSNBC.

‘This variant, the Delta variant, is 200 times more contagious than the original variant, so when you come in contact with this variant it’s much more dangerous,’ added Rimoin.

It’s unclear where Rimoin came up with the statistic she claimed, but some reports have suggested that Delta is 200 percent more transmissible than the strain first identified in China, which would make it three times as transmissible, not 200 times.

Even as cases surge, some states are scaling back on their reporting of new cases and deaths to once a week, making it harder to track the situation on the ground.

Florida, Nebraska, Iowa and South Dakota are all now reporting once a week, and the 73,000 new cases that Florida disclosed on Friday caused the daily figure to more than double from the day before, to 118,791.

Florida now accounts for a fifth of all new cases in the US, and the lack of data for six days out of the week is confounding efforts to accurately understand how quickly the virus is spreading. 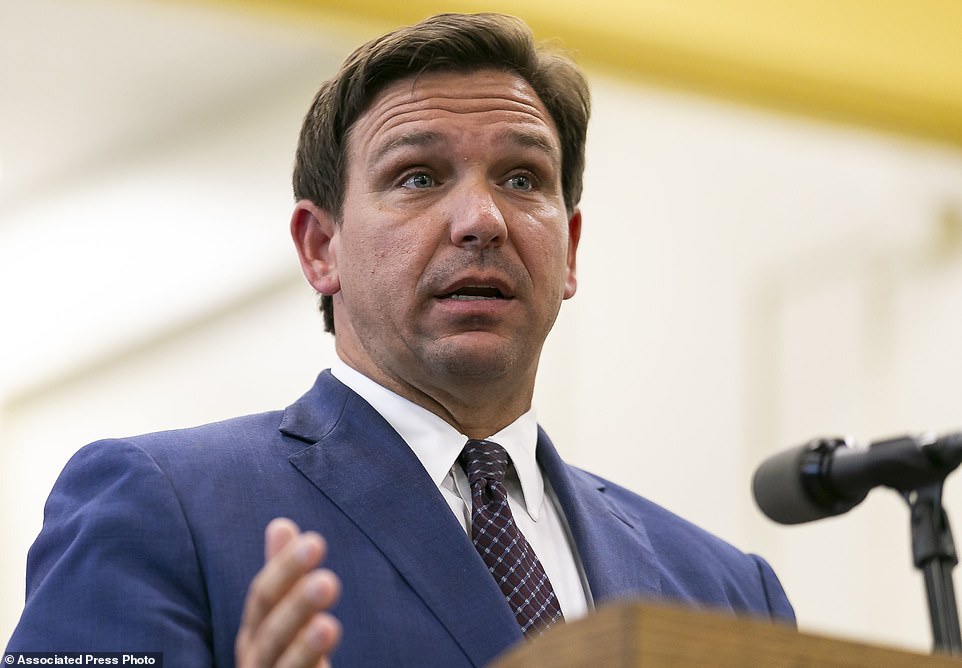 Florida Gov. Ron DeSantis is seen in a file photo. Florida now accounts for a fifth of all new cases in the US but is only reported new cases once a week, confounding efforts to understand how quickly the virus is spreading 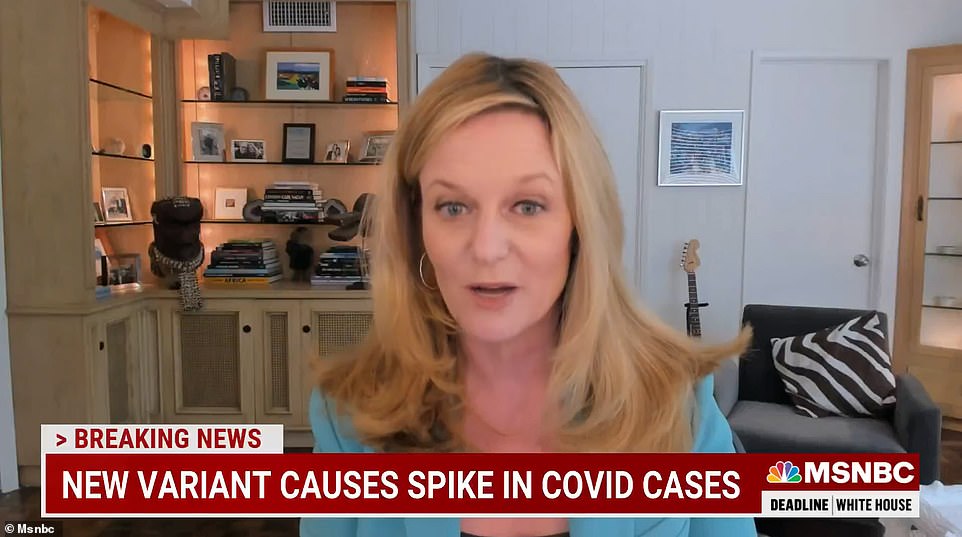 Anne Rimoin, a professor of epidemiology at UCLA, claimed Delta is ‘200 times’ more contagious than the original strain. It appears she may have meant to say 200% more contagious 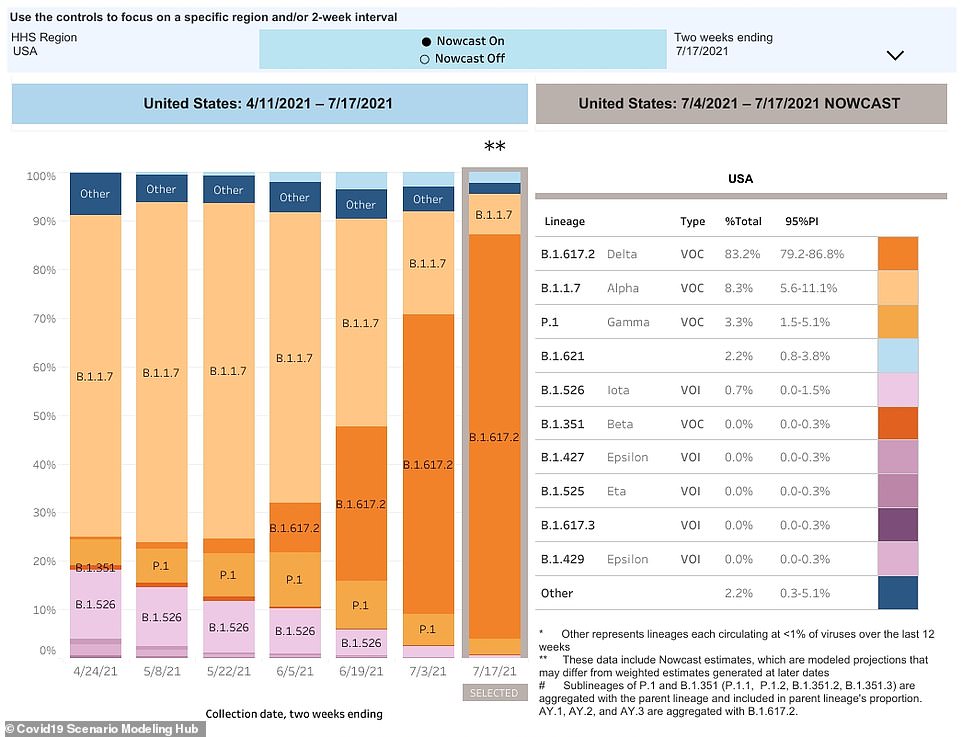 The Delta variant, seen in dark orange above, now accounts for 82% of all new cases in the US, according to the CDC 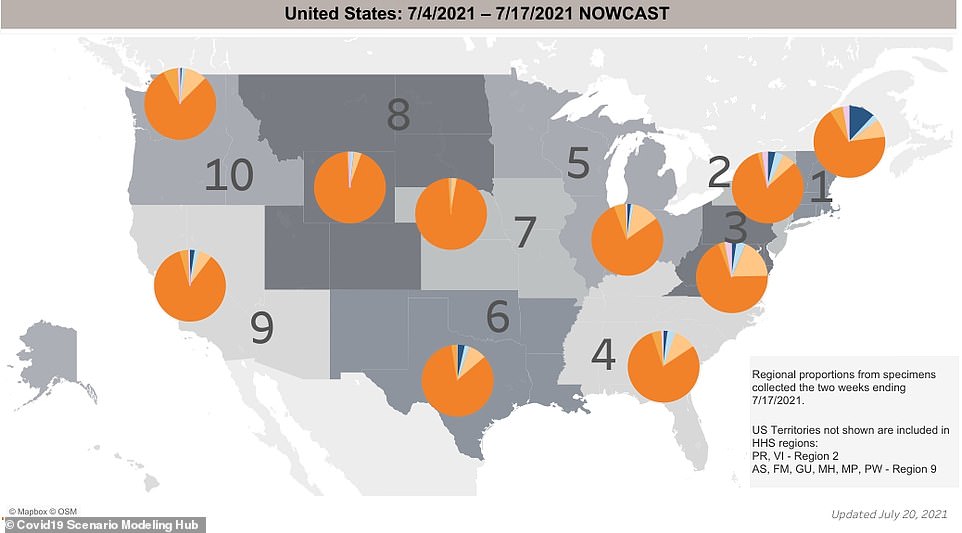 Further complicating matters as the virus surges, vaccination rates appear to be at or near a plateau, leaving a large population unprotected and allowing Delta to spread.

As of Friday, 162 million Americans were fully vaccinated, according to the CDC. That’s just under half of the US population, meaning roughly the same number are unvaccinated.

Those resistant to the vaccines often cite safety concerns, some of them rational and some ludicrous. But as the threat of a new surge mounts, public officials are urging people to discuss the risks and benefits of the vaccines with a trusted healthcare provider and reassess their choices.

Alabama Governor Kay Ivey had harsher words blaming for Americans who have refused to get vaccinated against coronavirus for rising COVID case rates.

Ivey’s state and others across the South are hammered by new infections – with three states in the region now accounting for 40 percent of active cases nationwide.

Asked about the remarks, White House press secretary Jen Psaki said Friday it is not the role of the administration to ‘place blame’ on the unvaccinated.

‘I don’t think our role is to place blame, but what we can do is provide accurate information to people who are not yet vaccinated about the risks they are incurring not only on themselves, but also the people around them,’ she said. 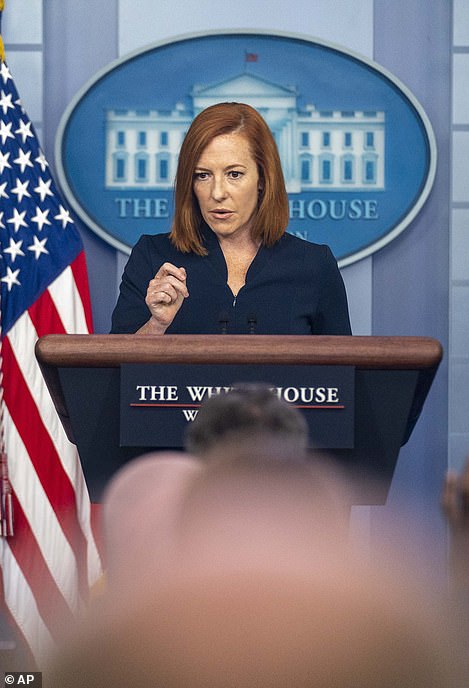 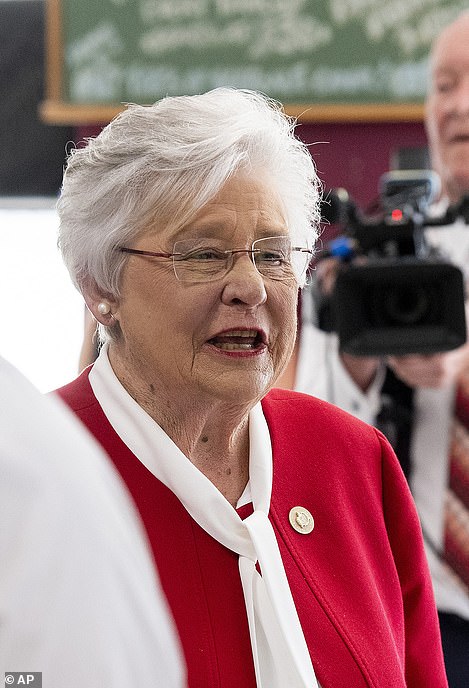 White House press secretary Jen Psaki said Friday it is not the role of the administration to ‘place blame’ after the governor of Alabama Kay Ivey (right) called out Americans who have refused to get vaccinated for the rising COVID rates in the U.S. 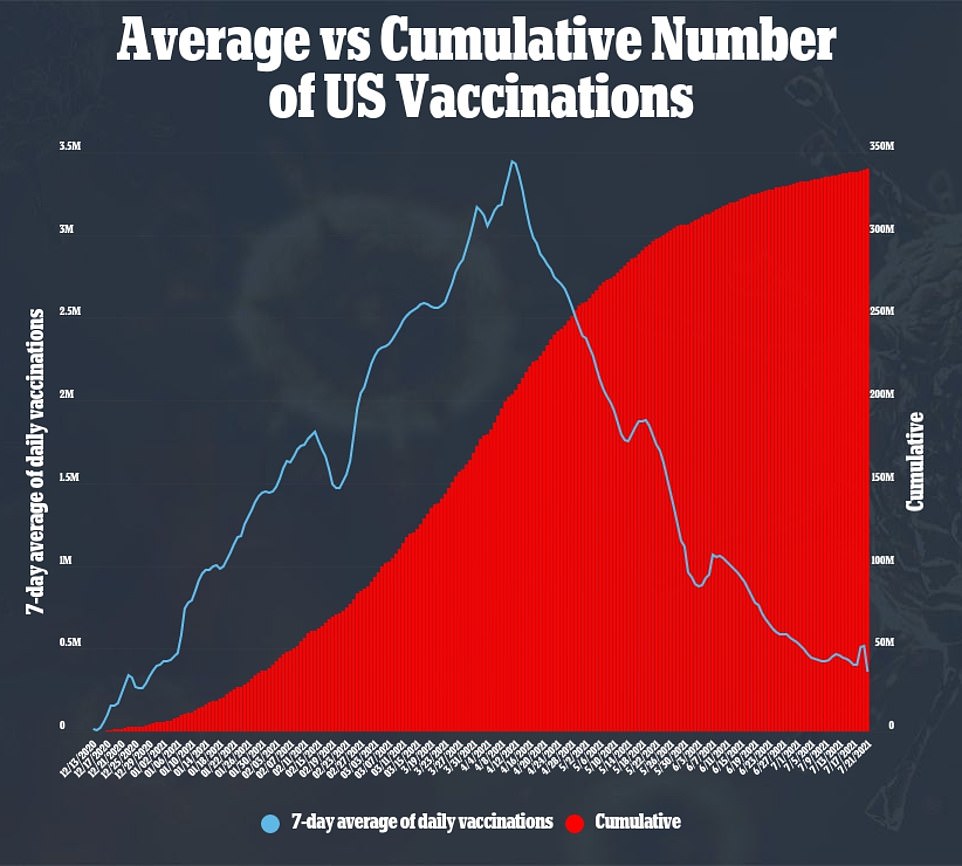 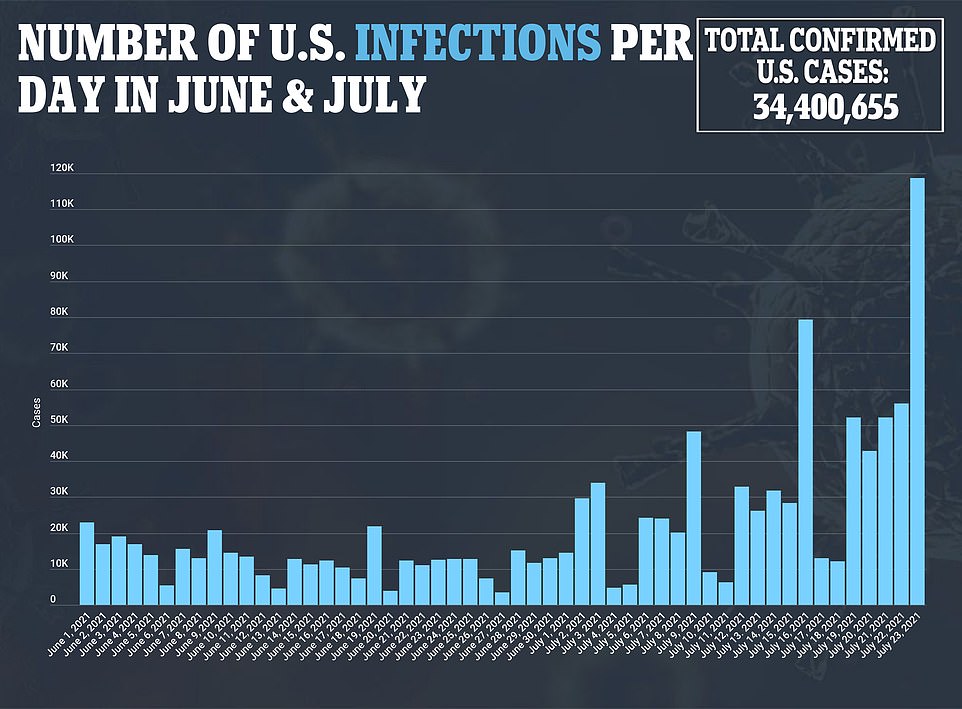 Psaki also refused to entertain the possibility the administration would put vaccine mandates in place, as the vast majority of new cases have been reported in people who are not vaccinated.

‘That’s not the role of the federal government,’ Psaki said when asked about mandates. ‘That is the role that institutions, private sector entities and others may take.’

She did express sympathy for Governor Ivey.

‘We understand her frustration, and we understand the frustrations of leaders out there, and the public voices who are trying to say the right thing, advocate for the efficacy of the virus, save people in their communities.’

In New York, Mayor Bill de Blasio on Friday urged all private employers to make vaccinations against COVID-19 compulsory, calling on them to do the ‘maximum you feel you can do’ as the nation is roiled by early signs of a resurgent pandemic.

The Democrat told WNYC radio that he wanted the private sector to do more. ‘If anyone is asking my advice, particularly large employers, move toward vaccine mandates now,’ de Blasio said.

‘I urge every employer to go to any form of mandate that you’re comfortable with.’

CDC Director Dr Rochelle Walensky warned that the current outbreak is becoming ‘a pandemic of the unvaccinated’ as most cases, hospitalizations and deaths are among people yet to take the shot while the nation’s vaccination rollout has stalled.

Fears are now mounting that the worst is yet to come as America looks to the United Kingdom, which is several weeks ahead in its battle against the Delta variant and is grappling with daily infections doubling within the space of a week.

Based on the rate with which the strain became dominant in the UK, then made up 100 percent of cases and set off a dramatic spike in cases and deaths, the US may well be just weeks away from reaching a similar crisis point.

New York City, which last year was the virus epicenter of the world, could see cases accelerate six-fold and deaths multiply by seven between now and the end of August if the spread of the variant mirrors that on the other side of the pond. 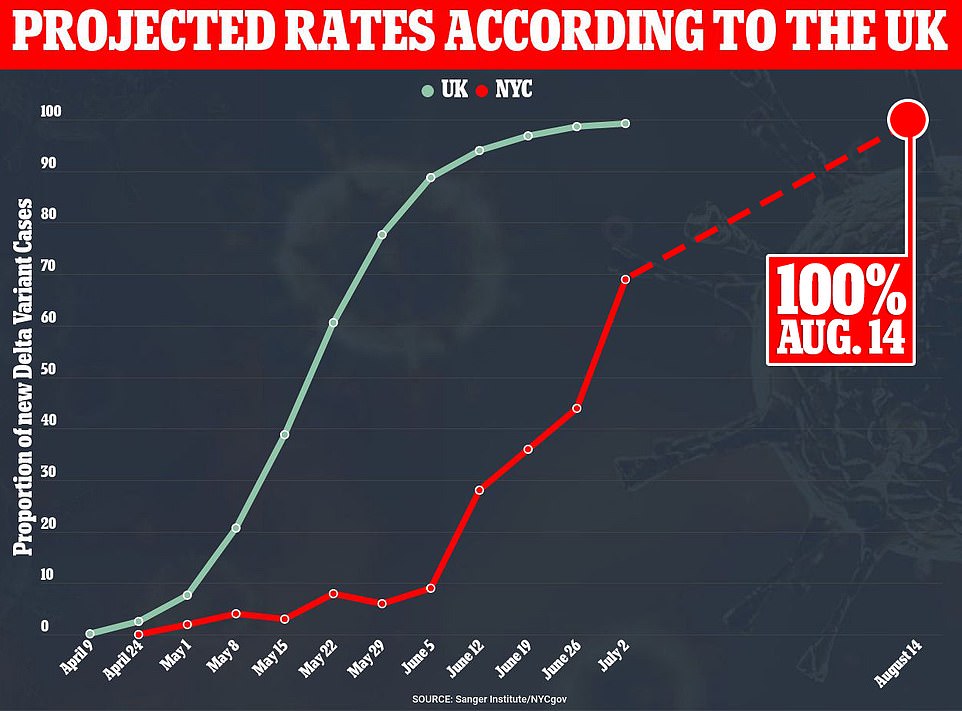 Delta spread quickly throughout the UK and had become the dominant strain by May 21, when 60.6 percent of all new cases in the two weeks preceding it were identified as the B1.617.2 variant.

Just six weeks later, on the week ending July 2, 100 percent of all UK cases were the Delta variant.

New York City has a lag on the UK when it comes to the prevalence of the strain.

It became dominant by the week ending July 3, accounting for 69 percent of all new cases just as people jetted in and out of the city for the July 4 weekend.

This means if New York City follows the same pattern as the UK, the Big Apple is on track for the Delta strain to make up 100 percent of all new cases by August 14.