By Joe Davies For Mailonline

Schoolchildren should be given daily tests instead of being forced to self-isolate when they come into contact with a Covid patient, scientists say.

More than one million pupils in England were absent from classrooms last week amid fears the rules are causing a lockdown by stealth.

But research by the University of Oxford found testing was just as effective as the current policy of quarantining for 10 days in stopping the spread of the virus.

Scientists studied more than 220,000 pupils and staff across 201 secondary schools from April to June this year.

They asked half to follow the current guidance — self-isolating after someone they were in contact with tested positive for Covid and the others to continue going to school where they were tested every day.

The study found that the daily testing approach reduced absences by 39 per cent. Only 1.5 to 1.6 per cent of all contacts in the trial tested positive, with the researchers claiming that daily testing was a ‘safe alternative’ to isolation.

But they said the study’s results do not necessarily apply to adults or work as a direct comparison to contact tracing via the NHS Covid app, which is behind the current ‘pingdemic’ that has forced millions of workers to isolate at home and wreaked havoc on businesses. 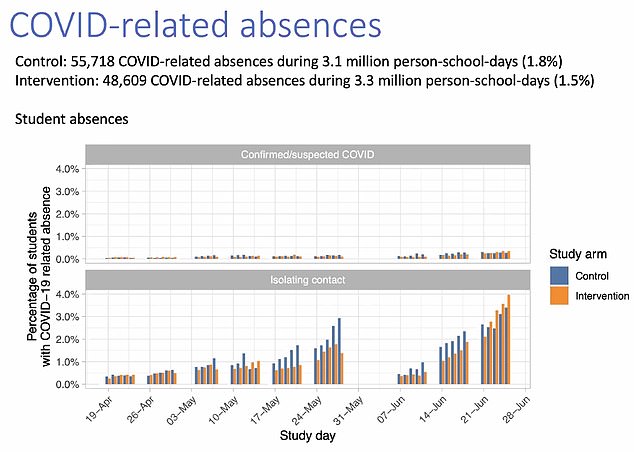 A University of Oxford study shows daily testing for schoolchildren after coming into contact with someone testing positive with Covid is just as safe as self-isolating — and it reduces absences by 39 per cent. Graph shows: The number of schoolchildren absent because of Covid in schools where isolation was enforced (blue) and where daily testing was offered (orange) 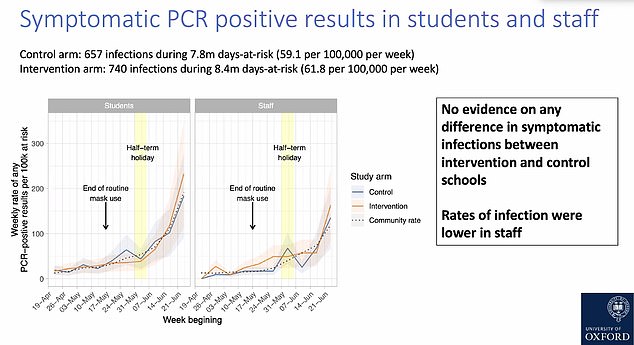 Researchers said students and staff were left ‘bereft’ when they had to return to the isolation policy after the study ended.

Speaking at a press conference yesterday, Bernadette Young, a clinical researcher in infectious diseases at the university, said: ‘[We had] really positive feedback.

‘In fact, some were left feeling quite bereft at the end of the study that they were having to stand down their testing and go back to isolation.

More than a million pupils were absent from class for Covid-related reasons last week – a record since schools fully re-opened in March, figures revealed yesterday.

A total of 1.05million were out of school because of the virus on July 15 when a snapshot of absences was taken.

That was up from 11.2 per cent the week before. The vast majority of the latest cases – 934,000 – were children isolating due to possible contact with someone testing positive for the virus.

The Department for Education figures also showed a further 34,800 pupils were off as a result of school closures due to Covid.

‘We got some actually quite emotional, positive feedback from some of the schools involved.

‘Isolation can cause tears at the school gates and having the offer to have testing — this was back in Easter when children had been out of school for a while — it was an emotional thing that they could have an alternative to isolation.’

The study gave students and staff at the schools where daily testing was used the option of isolating or coming in for the tests.

Around half chose to try the system, resulting in fewer absences and no impact on Covid spread in classrooms.

In the school where isolation was used, 1.8 per cent of school days were lost because of the virus, some of which were due to contacts outside of school.

Professor Tim Peto, professor of medicine at the University of Oxford, said: ‘Our findings indicate that there is no significant difference in Covid transmission between schools where bubbles were sent into home isolation versus those where daily contact testing was implemented instead.

‘Infection rates in the close contacts were low in general, and there was little difference between those who went to school following a negative lateral flow test and those who were isolating at home.’

And Government contact tracers have lauded the study’s results, saying testing could be used to avoid keeping children out of classrooms in the future.

Susan Hopkins, chief medical adviser for NHS Test and Trace says: ‘This is a major breakthrough, showing that daily contact testing can keep young people in classrooms instead of making them isolate at home.

‘Children and parents have made enormous personal sacrifices throughout this pandemic by isolating when needed and we all know the disruption it has caused in their lives.

‘So far, self-isolation has been one of the most effective tools at our disposal against Covid — stopping isolated cases from becoming major outbreaks.

‘To have another potential tool like this is great news.’