Former NFL player Terrelle Pryor Sr. escaped unscathed after his three-wheeler bike flipped twice when it was hit by a car.

Pryor posted photos and video of his expensive three-wheel bike banged up in his Instagram story Thursday morning, showing his fans the scratches on the door, a hole in the hood near the engine and the windshield completely smashed in.

He wrote at around 10 a.m. that he was ‘luckily still breathing’ after the bike flipped twice from ‘this dumb a** car chipping me.’

He later reiterated to TMZ that he was OK, saying ‘Yeah, I’m cool,’ and posted videos of himself working out at the gym just about about half an hour after the crash.

It is unclear where the crash occurred.

Pryor, 32, has previously posted photos and videos of himself in the bike, a Vanderhall model that costs nearly $30,000, according to TMZ, including a video of himself driving with no hands back in May.

He now says he is ‘done with bikes.’ 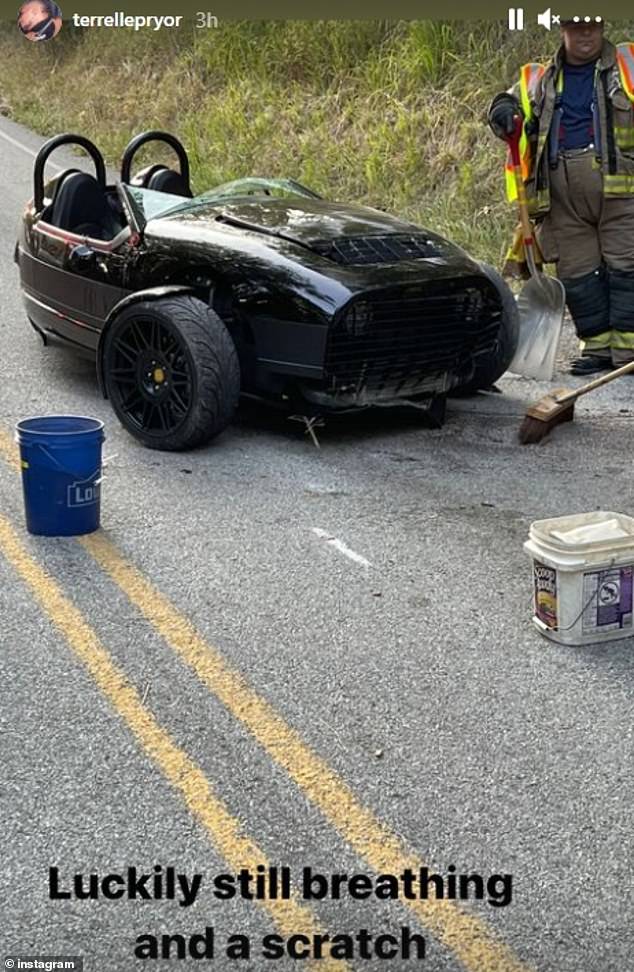 Terrelle Pryor posted a photo of his three-wheel bike banged up after a crash Thursday morning, writing on Instagram that he was ‘luckily still breathing’ 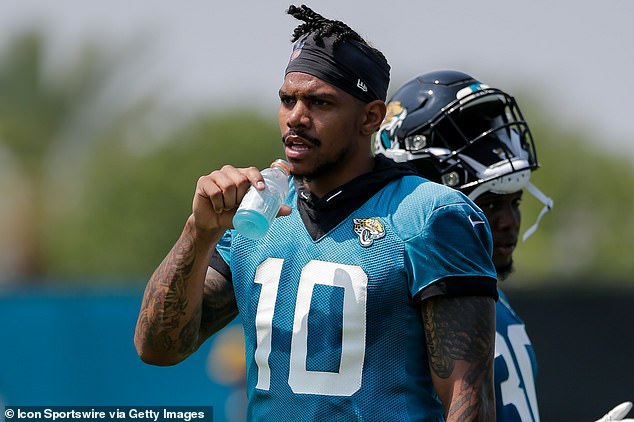 He was drafted to the NFL in 2011, and spent some time on a variety of teams, including the Jacksonville Jaguars, which ultimately dropped him in the 2019 preseason

This is not the first time Pryor is lucky to be alive, however.

In November 2019, he was stabbed with a kitchen knife by his now ex-girlfriend Shalaya Briston following a dispute, and lost three and a half liters of blood.

His lawyer, Stephen Colafella, said at the time that he had gone out to dinner with Briston and a few friends on November 30.

After a small dispute, Colafella claimed, Pryor decided to head home while others stayed a the party.

He said in a TMZ article from the time that Pryor went to sleep, but was awakened by Briston and two of her friends outside of his apartment. 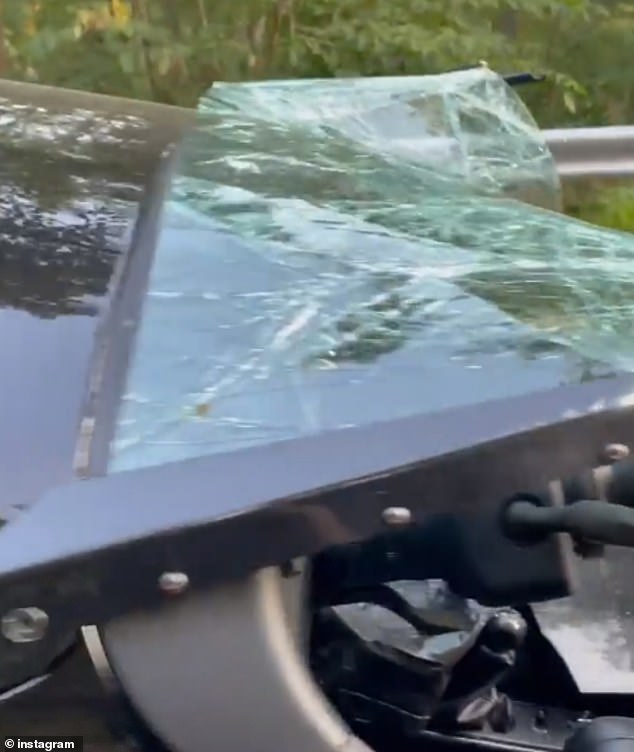 Pryor said the bike flipped over twice when it was hit by a car, and showed the damage to the $30,000 vehicle – including the windshield being completely smashed in 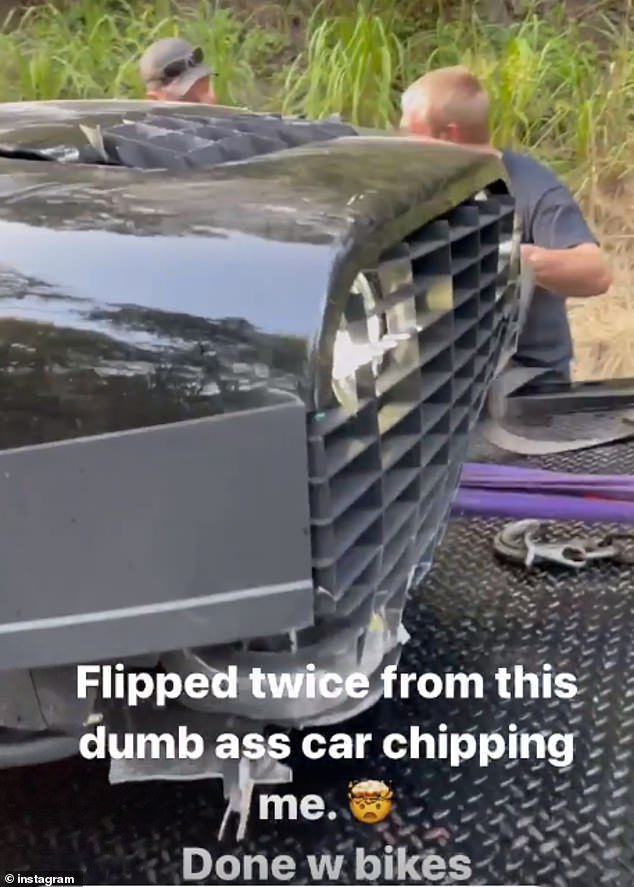 When he tried to leave, Colafella claimed, one of the women struck him in the face, at which point Briston grabbed a kitchen knife and stabbed him twice.

The former NFL player reportedly suffered a ‘very deep’ stab wound above his left pectoral that just missed a major artery, and was also stabbed in the left shoulder.

A police report, however, cited a witness who said Pryor attacked Briston and a group of friends, at which point Briston stabbed him.

In the end, an attempted homicide charge against Briston had been dropped, according to CBS Pittsburgh, and she pleaded guilty to simple assault, with a two year probation, while Pryor pleaded guilty to harassment and faced 90 days probation. 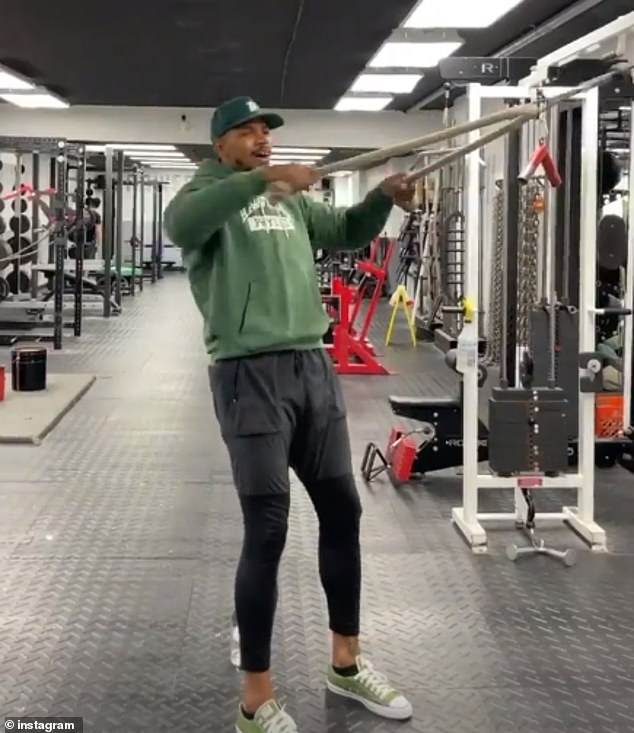 Pryor was considered one of the top high school recruits when he signed with the Ohio State Buckeyes in 2008, eventually becoming the Rose Bowl MVP in his sophomore season.

He tied for the most touchdown passes in the school history, at 57, and has the second most wins at the school, with 31 total victories by the end of his career, according to the university’s athletic department.

In 2011, he was drafted to the NFL and spent his first three seasons as a quarterback with the Las Vegas Raiders, but later became more successful as a wide receiver with the Cleveland Browns, according to the Bleacher Report.

From there, Pryor went on to play for a variety of teams – including the Washington football team, the Buffalo Bills, the New York Jets and the Jacksonville Jaguars, who ultimately released him in the 2019 pre-season.

He has said he wants to continue his professional football career, telling TMZ last year, he has had conversations with multiple teams, including the Patriots, about a possible comeback, but he remains a free agent.