Like the U.S. and other nations, the COVID-19 pandemic’s impact on Japan has been shaped by socioeconomic disparities – and outbreaks driven by the Olympics could continue this trend.

In Japan, regions with lower incomes, higher unemployment, more essential workers, and other conditions have faced higher COVID-19 case and death rates, according to a recent paper from the Harvard T.H. Chan School of Public Health.

These findings challenge assumptions that Japan’s success in containing the coronavirus thus far has been tied to the nation’s homogenous population.

With the Olympic Games starting on Friday in Tokyo, only 23 percent of the Japanese population is fully vaccinated.

Experts are concerned that the Games could accelerate already-rising case numbers in Tokyo and in the country as a whole.

The nation’s vaccination campaign should prioritize vulnerable populations during this case spike, Dr Ichiro Kawachi, one of the paper’s authors, told DailyMail.com. 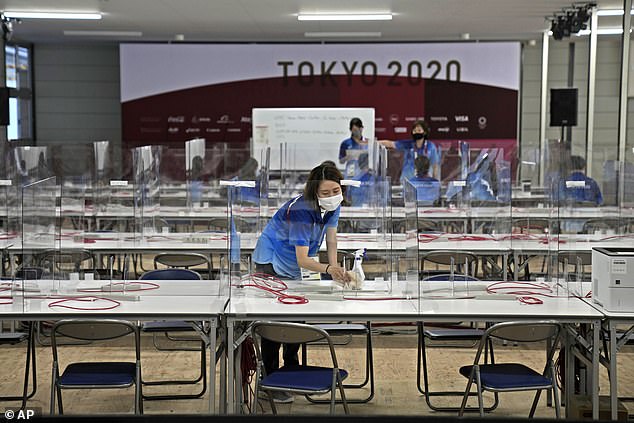 The Summer 2021 Olympics were delayed from 2020 due to the Covid pandemic but, even as the games open on Friday, Covid concerns are far from vanquished.

While Tokyo declared a state of emergency on July 8 due to rising Covid cases, the games are still going ahead – with no spectators and intense precautions for athletes.

Some experts worry that these precautions won’t be enough to prevent the Olympics from becoming a superspreading event.

Indeed, with only 23 percent of the Japanese population fully vaccinated – and many Olympic staffers and volunteers operating on only one dose – an outbreak may seem inevitable.

In the U.S., when Covid surges, disadvantaged populations are at higher risk of infection and death.

This has included low-income Americans who aren’t able to work from home, many of them people of color.

Japan, in comparison, is more homogenous – and therefore it may appear to be lower risk. The country has a low Covid death rate, just 15,000 deaths since the start of the pandemic.

But in fact, Japan has also faced Covid disparities tied to socioeconomic status, according to a new paper published on July 14 in JAMA Network Open.

‘However, when it comes down to the question of who is most vulnerable to getting sick, the data from Japan look very similar to the USA and Europe.

‘We found that lower household income, frontline occupations, smoking, and obesity were all associated with higher infection risk.’

Kawachi and his colleague analyzed total COVID-19 cases and deaths in Japan, with data going through February 2021.

They stratified the data by the country’s 47 prefectures – similar to U.S. states.

Prefectures with lower household income had higher infection rates, the researchers found, as did those with higher unemployment rates.

The sharpest risks were associated with occupation. Regions with more workers in the restaurant industry had Covid infection rates 6.5 times higher than those with fewer restaurant workers.

Workers in the transportation and postal industries also had higher risks – these prefectures had 3.4 times and 3.3 times higher infection rates, respectively.

When controlling for these socioeconomic factors, the researchers found that high smoking rates and obesity were associated with a higher risk of dying from Covid.

‘Our data suggest that obesity and smoking are linked to higher COVID-19 incidence, Kawachi said.

‘Hence, the biology of the coronavirus is the same in Japan as elsewhere.’

‘Moreover, although rates of obesity in Japan are much lower than in the United States, we do see the same socioeconomic disparities in obesity, i.e., high rates in groups with lower incomes.’ 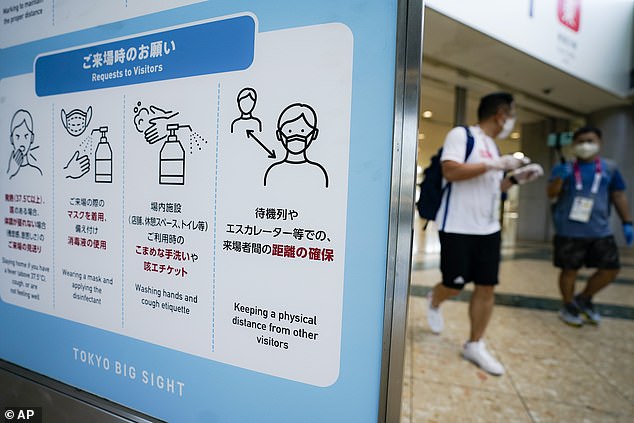 Kawachi told DailyMail.com that Japan’s leaders did a relatively good job of protecting residents in the nation’s nursing homes with about 14 percent of all Covid deaths in Japan occurring in nursing homes, compared to 35 percent in the U.S.

But Japan left other vulnerable groups unprotected. He cited single, working mothers as an example.

‘The persistent gender wage gap, income/employment precarity, as well as inadequate provisions for childcare, create huge stresses for this group, as reflected in their rising suicide rates,’ Dr Kawachi said.

As case numbers at the Olympics tick up, the event’s risk is clear to Dr Kawachi and other experts. More than 70 cases have been identified as of July 20.

‘Tokyo is in the midst of another surge in cases, and only a third of the population is vaccinated, despite Herculean efforts to catch up,’ Kawachi said.

As of July 20, about 35 percent of Japan’s population has received at least one dose of a Covid vaccine and 23 percent has been fully vaccinated. 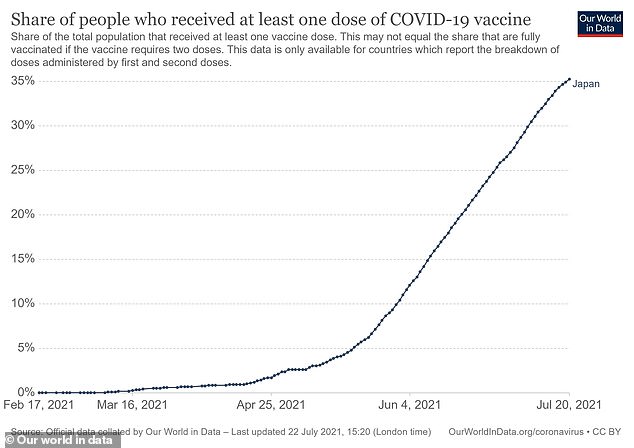 As of July 20, just over one-third of Japanese residents have received at least one dose of a Covid vaccine – and about 23 percent are fully vaccinated

The nation’s vaccination rate has surged in weeks leading up to the Olympics. But many of those staffers and volunteers working at the games have just one dose.

In fact, Tokyo officials asked Olympics workers to delay their second dose until after the event concluded, according to reporting from The Daily Beast.

These workers aren’t undergoing the same intensive testing and other precautions as Olympic athletes – increasing the likelihood that they could bring Covid from Olympic events back home to their communities.

‘Even though precautions have been taken to form a protective bubble around athletes, from an epidemiological perspective, [an outbreak] would appear to be an avoidable and unreasonable risk,’ Kawachi said.

Such an outbreak could easily expand outward and impact the same populations that have been vulnerable in Japan throughout the pandemic.

As a result of their findings, Kawachi and his coauthor, Dr Yuki Yoshikawa, recommend that Japan’s vaccination campaign prioritize the disadvantaged groups that their paper identified as higher-risk.

‘One way to do this is to allocate special efforts to regions (in the case of Japan, prefectures) that have higher concentrations of populations in these categories,’ Kawachi told DailyMail.com. 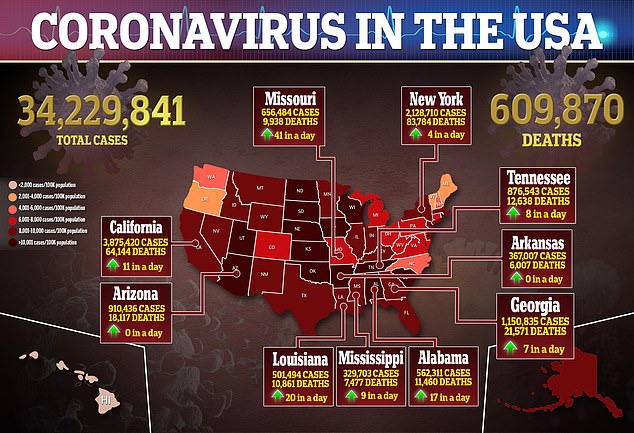