A former aid worker who helped Angelina Jolie adopt her son Maddox has claimed that he cannot be ‘100% sure’ that he was an orphan.

Sarath Mounh, who ran an NGO in Cambodia, became a close friend of the Hollywood star during her visits to the country from where Maddox was adopted.

He also played a role in the adoption process by signing legal documents stating that he was Maddox’s real father, which he is not, to help get it approved quicker by the Cambodian courts, though there is no suggestions Jolie was aware.

In an exclusive interview Mr Mounh told MailOnline: ‘I’m not 100% sure that Maddox was an orphan even though he came from an orphanage. At least one of the parents was possibly alive at the time of his adoption. But I never asked these difficult questions, nobody did. 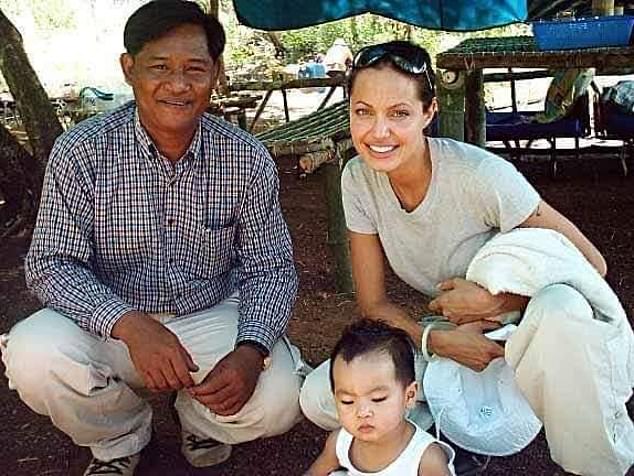 Sarath Mounh ran an NGO in Cambodia and was friends with Angelina Jolie in 2002 around the time that she adopted her eldest son, Maddox. Pictured: Mr Mounh with Jolie and Maddox 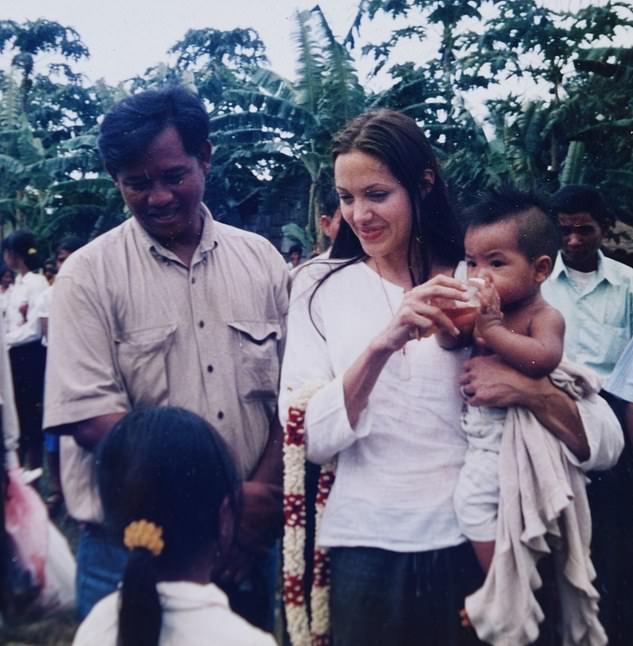 Mr Mounh (pictured with Jolie and Maddox) played a role in Maddox’s adoption due to his friendship with the star and signed the papers stating he was the boy’s father, even though he wasn’t, to speed up the process in court, though there is no suggestion Jolie was aware of this 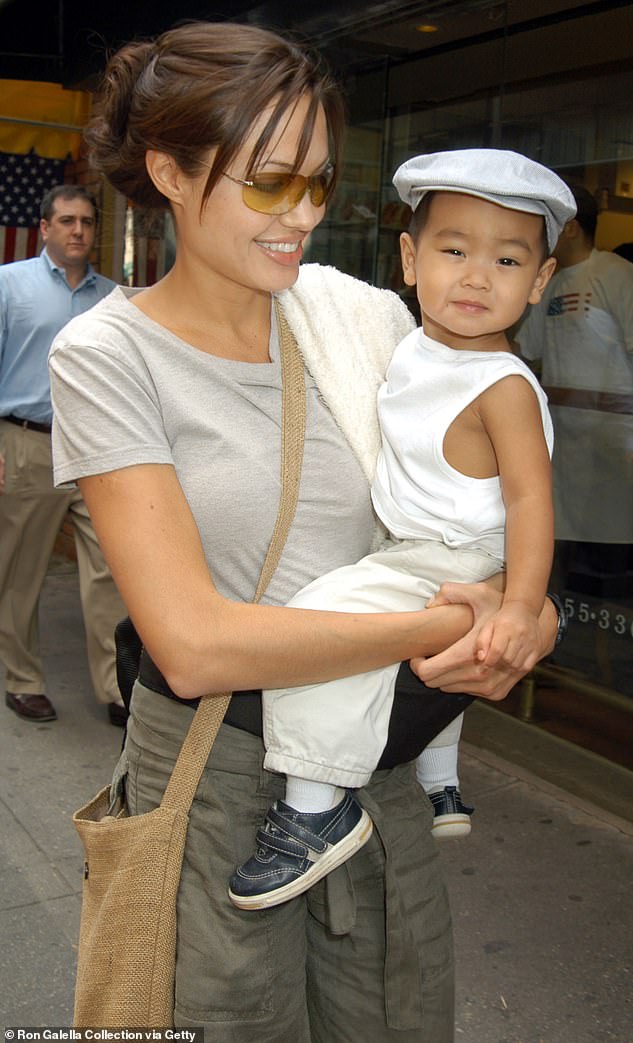 Now Mr Mounh has come forward to say that he cannot be certain that, despite being kept in a Cambodian orphanage, that both of Maddox’s parents were dead at the time of the adoption 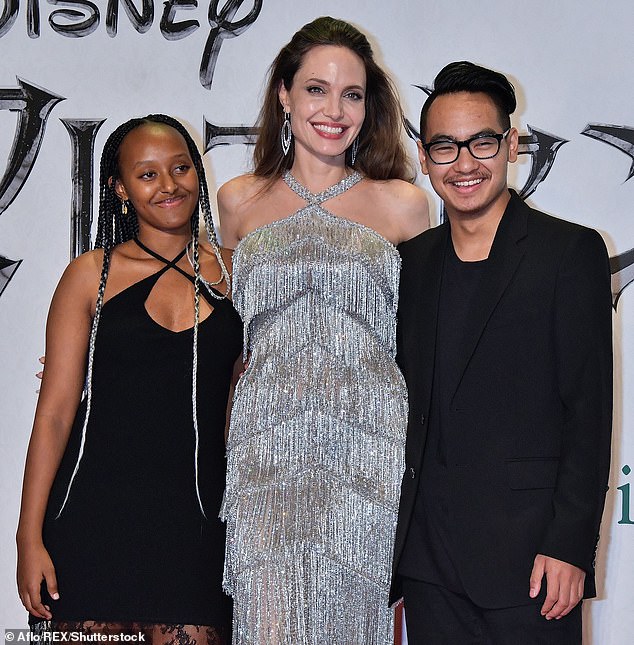 Jolie shares six children with her former husband Brad Pitt. Here she is pictured  in 2019 with her daughter Zahara (left), 16, who she adopted from Ethiopia and Maddox (right), now 19

‘This was happening a lot in Cambodia. There were many babies who were left in orphanages or sold to them by their parents because they couldn’t afford to look after them.’

At the time, Kek Galibru, head of the human rights agency Licadho, who investigated the adoption, said: ‘I’m sure that this child was not a real orphan and was not abandoned.’ 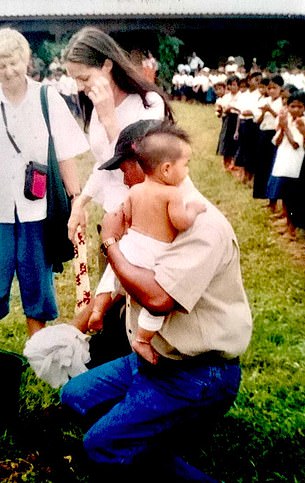 Mr Mounh is pictured with Maddox as a baby

However, Jolie, 46, said she’d gone to great lengths to verify that Maddox had no living parents and has always maintained that he was an orphan.

She said: ‘I would never rob a mother of her child. I can only imagine how dreadful that would feel.’

But the fresh questions raised by Mr Mounh come as a new documentary will probe whether babies in Cambodia were stolen from their families and put up for adoption.

Filmmaker Elizabeth Jacobs, 21, will revisit the claim that ‘poor Cambodian families are preyed on by baby recruiters’ in her documentary, The Stolen Children.

At the time, Galindo and her sister Lynn Devin ran an adoption agency called Seattle International Adoptions, and shortly after Maddox’s adoption they faced criminal charges.

Devin was given a $150,000 fine for falsifying documents to obtain US visas for ‘orphans’ while Galindo was imprisoned for 18 months in 2004 for the same crime and money laundering.

When the scandal was exposed, the U.S. government and several other countries shut down adoptions from Cambodia, with Jolie saying she knew nothing of the illegal trade. There is no evidence Maddox was not an orphan. 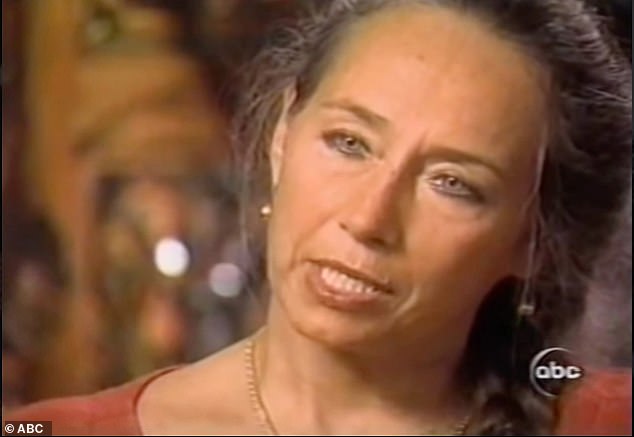 Lauryn Galindo (pictured) ran an adoption agency called Seattle International Adoptions and famously organised Maddox’s adoption for Jolie. In 2004 Galindo was jailed for 18 months for for falsifying documents to obtain US visas for ‘orphans’ and for money laundering

But Mr Mounh said to MailOnline: ‘When it comes to money, everything is possible. This is what I kept on hearing at the time from those around Angelina: ‘Make it happen.’

He added: ‘Angelina didn’t personally get involved. It was those around her that were handling the process and asked me to help.’

Mr Mounh revealed that he was asked to get involved in the adoption because of his friendship with Jolie and on account of his influence in the Battambang Province, in North West Cambodia where his NGO was based. His organisation ran several projects such as education programmes for children, funding for poor farmers and health drives. These were all aimed at villagers in north east Cambodia. 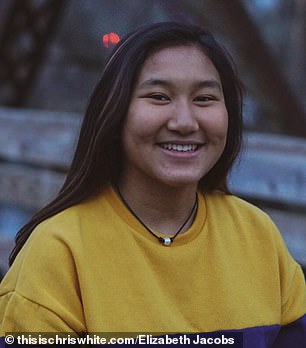 Referring to the documentary, Mr Mounh said: ‘I hope it uncovers the entire adoption system in Cambodia at the time. But I don’t want Maddox to be emotionally hurt by this.

‘His adoption was accepted by the law but to this day, I can’t say for sure if he was an orphan, I don’t think anyone can. But I don’t want him to be damaged by what may come out.’

He added: ‘I want Maddox to have a good life and bright future. I still have a lot of love for him and Angelina, even though I haven’t seen them in a long time.’

Mr Mounh revealed that he was asked to sign documents stating to be Maddox’s father. There is no suggestion that Jolie was aware that Mr Mounh wrongly signed documents.

He added: ”It’s true that it was misleading when I signed the adoption papers. I was concerned that this was not honest, but I felt an obligation to sign the papers. Because of my friendship with Angelina, I wanted to help her as best I could. She was also a donor to my organisation.’

Jolie provided $300,000 of funding for his NGO, with plans to donate a further $1.2 million and often came to see its work in the Battambang Province. Her own charitable foundation for Cambodia is also based in the same area.

Mr Mounh, 55, met Angelina in 2000 after being introduced by the UNHCR, the United Nations refugees agency, for whom he did a lot of work helping to resettle refugees following Cambodia’s brutal civil war. 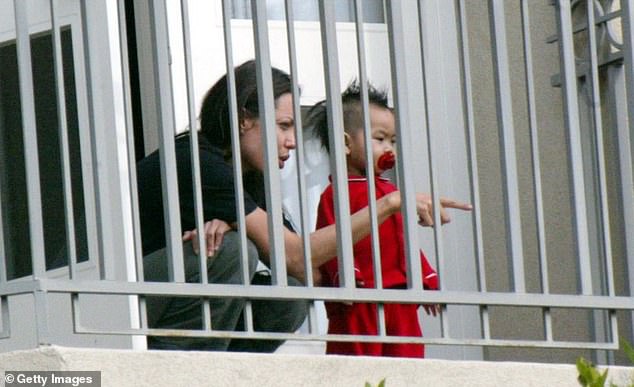 Jolie plays with Maddox, on the balcony of a hotel on December 30, 2002 in California

Jolie is a UNHCR Special Envoy and showed special interest in Mr Mounh’s NGO, Cambodia Vision in Development (CVD), which has now folded.

He added: ‘She spent a lot of time in Cambodia from 2000 onwards, visiting our projects and we often stayed overnight together. Angelina had a lot of love for my country.

‘She became a very good friend and spoke openly to me about her desire to help my organisation and her hopes for Maddox.’ 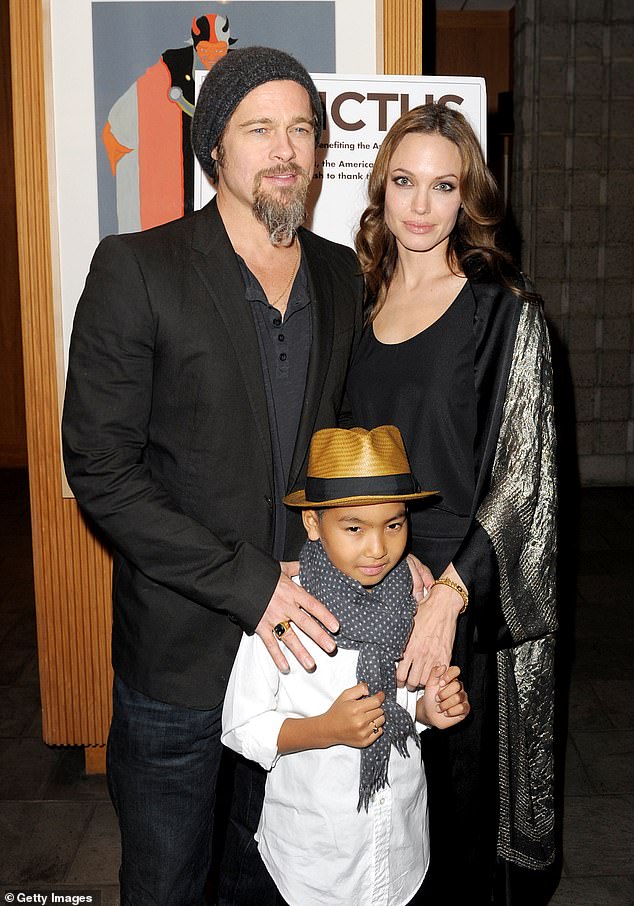 In addition to adopting Maddox, Jolie adopted Zahara in Ethiopia and Pax in Vietnam.

Mr Mounh’s youngest son Makara is the same age as Maddox and he recalled how he and Jolie discussed bringing them up as ‘brothers’ during her visits to Cambodia.

He added: ‘I wanted them to grow up together and me and Angelina would talk about this. Sadly, that’s not happened.’

Mr Mounh and Jolie fell out following allegations made against him that he misused funds donated by her.

But he hit back: ‘I can account for every dollar that was given to my organisation. I know that Angelina has nothing against me, and I still consider her a friend. It was those around her who made problems between us.’

He last saw the Hollywood star and Maddox in 2003 when they visited Cambodia.

Mr Mounh added: ‘I follow their lives very closely through the media and would love to get back in touch with them but don’t know how. I still have a lot of respect and love for both of them.’

Mr Mounh fled Cambodia in 2017 fearing for his life on account of his political activities against the ruling government. He now lives in Canada with his wife and three children.