Two muggers stabbed a sheikh’s son to death outside Harrods for his £34,000 designer watch but fled empty handed, a court has heard.

Badir Rahim Alnazi, 24, and Arseboon Dilbaro, 23, stand accused of knifing Mohammed Al-Araimi, 20 and his friend Nasser Kanoo, 21, after the pair left the Bulgari Hotel in Knightsbridge.

Mr Al-Armani, a second-year King’s College student who lived in London, had been in the ‘wrong place at the wrong’ time after going out for a meal with a friend when they were approached by two men.

Mr Al-Araimi, the son of the Omani sheikh and business tycoon Abdalla Al Araimi, was stabbed to the left side of the front upper chest on 5 December 2019.

He collapsed under a Christmas tree next to Harrods and died from his injuries just 40 minutes later, Inner London Crown Court heard.

Mr Kanoo, who studied at King’s College London with Mr Al-Araimi, was knifed to the left side of his back, just above the hip.

He received hospital treatment and will give evidence during the trial.

Mr Al-Arami was wearing a Patek Phillipe watch worth £34,460 when he was stabbed while his friend’s timepiece was a Rolex worth £7,150 but the muggers fled empty-handed, jurors heard. 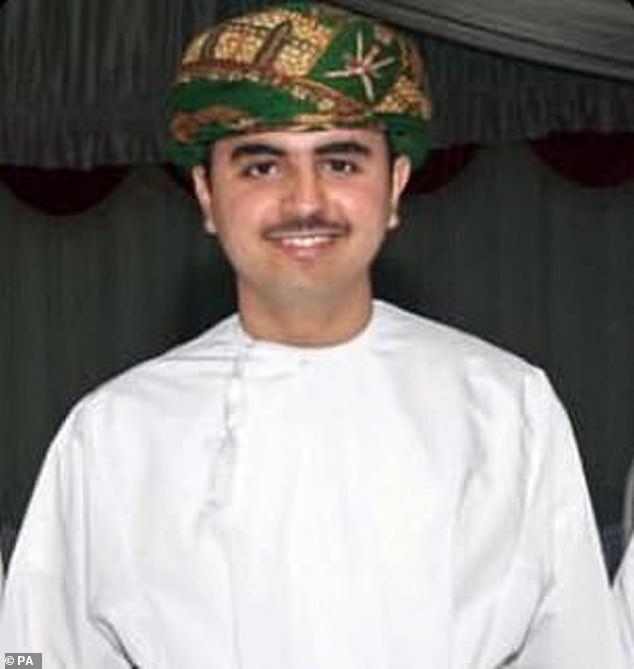 Mohammed Al-Araimi, 20,was wearing a Patek Phillipe watch worth £34,460 when he was killed in a mugging near to the famous Knightsbridge department store on December 5, 2019

Anthony Orchard, prosecuting, said: ‘The two defendants had gone out that night looking for a victim or victims to rob.

‘Their circuitous route to Knightsbridge demonstrating their desire to wait for the right victim or victims in the right location.

‘Unfortunately for them, the two friends, Mohammed Al-Araimi and Nasser Kanoo were in the wrong place at the wrong time.

‘Badir Alnazi and Arseboon Dilbaro went to them. They had knives ready to enforce their threat, ready to use.

‘Both victims were stabbed. Mohammed Al-Araimi died less than an hour later.

‘Tragically he became yet another victim of knife crime.’ 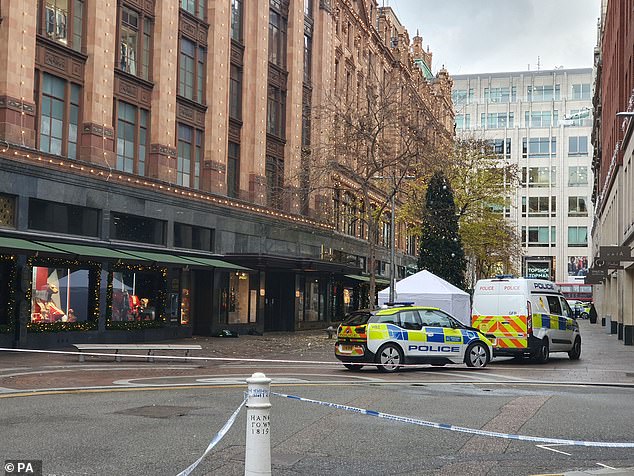 Mr Al-Armani was second-year King’s College student, who lived in London while studying politics and economics. Pictured: The murder scene outside Harrods, London

Despite the best efforts of paramedics, after security officers from Harrods and police had rushed to Mr Al-Araimi’s aid he was pronounced dead at 00:39 on December, 6.

Mr Orchard said the two attackers walked off in the opposite direction and they were captured on a CCTV camera at the Park Tower Casino.

‘The clothing and faces of both can be seen clearly.’

Kuwaiti citizen Alnazi walked into Charing Cross Police Station on 8 January 2020 after two CCTV clips were released to the media and he saw himself on social media.

Following his arrest Alnazi denied his involvement in the attack and said: ‘I am innocent of these charges.

‘I deny that I went to Knightsbridge with the intention to commit robbery. Similarly, I deny that I tried to rob anyone on 5 December 2019.

‘I further deny that I intended to cause harm to anyone or that I stabbed or caused injury to anyone.’

Police went to an address in Ashburnham Road, Kensal Green, looking for Dilbaro on 15 January but were told he had gone to Cairo.

Dilbaro, a German national, returned to the UK last 14 July and was arrested at Heathrow, the court heard.

Mr Al-Araimi was a politics and economics student at Kings College London.

His father, Sheikh Abdalla Al-Araimi owns the Al Raid Group, a group of companies that develop shopping malls and leisure centres in Oman.

Alnazi alone has admitted possession of an offensive weapon. Both defendants accept it is them captured in the CCTV footage.