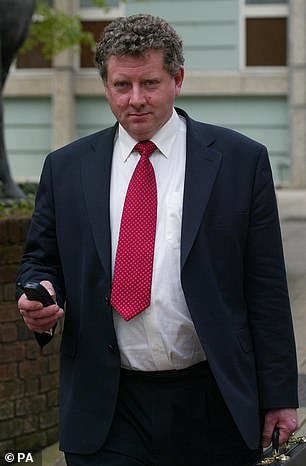 The boy, now 31, said he went along with family friend Robert Wells (pictured in 2004) who he thought was a policeman

A paedophile former police doctor filmed himself abusing a drugged eight-year-old boy after telling him he would be a star, a court has heard.

The boy, now 31, said he went along with family friend Robert Wells, 69, who he thought was a policeman.

He said: ‘I asked him if it was police work because I knew he was a police doctor. I knew something wasn’t right, but I didn’t know what it was but I thought it would be alright because he was a policeman.’

A jury heard former police medical examiner Wells had drugged the boy before driving him to a disused industrial area in Brighton.

A jury at Lewes Crown Court in Hove heard Wells has a string of convictions for sexual offences against children.

Wells, wearing a blue checked shirt, walked out of the dock for a break as the court heard he refused to meet Sussex Police detectives who tried to interview him in prison after fresh allegations were made in 2016.

Jennifer Knight, QC for the Crown, told the court Wells qualified as a doctor in the 1970s and worked as a GP in Caerleon, South Wales, for ten years before moving to private practice in Brighton in 1990.

Ms Knight said: ‘He was also a forensic medical examiner, a police doctor, for Hampshire constabulary.’ 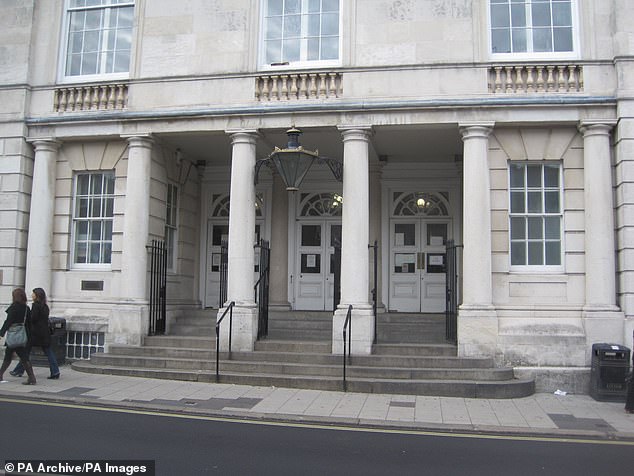 The boy and his mother moved to Scotland soon after starting primary school. He visited Hove during the half term break in October 1998 for a birthday party.

Ms Knight said: ‘Wells said he didn’t look well and gave him a pill. He reassured him he was a doctor and he needed it.

‘He said he had some work to do and took him away from the party. They arrived at what looked like an industrial area.

‘He was taken up stairs into a large room. They were joined by another man who he didn’t know.’

There was a hospital-style bed with a bright light shining on it, Ms Knight said. ‘There was a five-eight year-old girl lying on the bed, naked and seemingly unconscious. 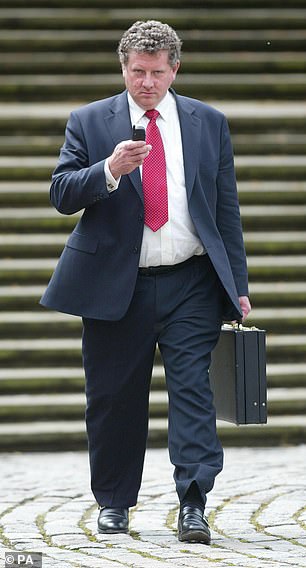 A jury heard former police medical examiner Wells, 69, had drugged the boy before driving him to a disused industrial area in Brighton

‘He recalls a large camera in the corner of the room. Wells gave him something that looked like a small hammer or judges’ gavel.’

She told the court Wells told the boy to abuse the girl with it. The boy said Wells persuaded him saying he would be a star if he did it.

He said another man in the room was operating the camera. ‘He remembers waking up in a different room in a bed, possibly in a flat.

‘He felt confused and anxious,’ Ms Knight said. The boy found the events impossible to forget and went to police in January 2016.

The jury was told while Wells was a GP in Wales he indecently assaulted three of his patients.

He assaulted another teenage girl in November 1998, telling them all he was giving them a medical examination.

Wells moved to Brighton in 2000. In Feb 2003, he was arrested after filming himself sexually abusing two young girls after drugging them at his flat in Southampton.

He was jailed for 15 years at Winchester Crown Court in 2004. After being released in 2015, he was arrested again when he failed to keep to the conditions of his licence.

He was jailed again for another seven years following another trial in Cardiff.

A cold case review led to the discovery of new abuse videos on his computers and he has been convicted of multiple offences of indecent assault, rape and filming of a girls and her sisters who he befriended in Brighton

Wells refused to meet police when they went to interview him in prison.

In February last year he was charged by post after again refusing to meet with detectives.

Wells denies two counts of indecency with a child and attempting to take an indecent image of a child with another unknown male between September and November 1998.

The trial at Lewes Crown Court in Hove continues.