Tradies from across Sydney have pleaded with the government to let them go back to work so they can feed their families during Covid lockdowns that have brought the $60billion construction industry to its knees.

Building sites came to a grinding halt on Monday as Gladys Berejiklian ordered construction pause until the end of July to reduce Covid case numbers, which grew by 78 on Tuesday.

The number of infections is particularly high in the south-west Sydney hotspots of Fairfield, Canterbury-Bankstown and Liverpool – where one in ten people work in the building sector.

The greater Sydney lockdown is scheduled to end on July 30, but could last much longer.

Last week the federal government announced a coronavirus support scheme to give people who have lost more than 20 hours of work a $600 weekly payment – but Jim from St George Painting says he and his colleagues ‘don’t want handouts’. 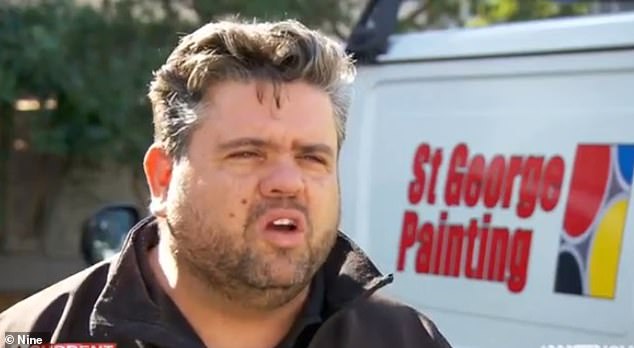 Pictured: Jim, a painter from St George Painting, has pleaded with the government to let him work again

‘We want to work,’ he told A Current Affair on Tuesday night.

Jim has been using the lockdown to teach his sons Vasilly and Gregory about the trade, but he’s going stir crazy staying at home.

‘I’m trying to be the head of the family, the rock of the family and come up with answers and I can’t,’ he said.

‘We’re not used to staying at home, we’re up in the morning going off to work.

He pleaded with the government: ‘Open up and let us pay our way. We need the work. We love what we do.’

Builder George Khoury from Liberty Building Contractors said his company feeds seven families who have now been left without an income.

Builder George Khoury (pictured middle, with his employees and their families) from Liberty Building Contractors said his company feeds seven families who have now been left without an income

‘There’s seven jobs we’ve had to stop. And a lot of the jobs, our clients are close to moving into their homes,’ Mr Khoury told the program.

His wife Bernadette said: ‘If we’re not being paid, we can’t pay our rent. And obviously no food on the table.’

Their daughter, who has a young child, said she is deeply worried about her parents – ‘my dad especially’.

Fred, who is a landscaper at Thorn and Thistle, and his nephew Buddy got a delivery of plants and soil worth $1,000 on the Friday, only to be told they could no longer work the following day.

‘We can’t pay because we’re not getting paid,’ he said. 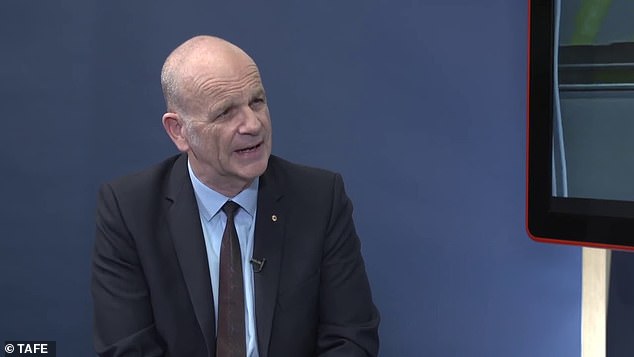 Buddy said: ‘We might be a small businesses, but there’s a lot of people who rely on us.’

He said they often buy coffee and lunch from local stores and support local businesses.

Homeowner John was supposed to move into his newly renovated house on August 9, but the whole project has been halted due to lockdown – forcing him to extend the lease on the rental where he is staying.

During Victoria’s gruelling lockdown last year, small residential projects were allowed to continue with less than five workers on site. 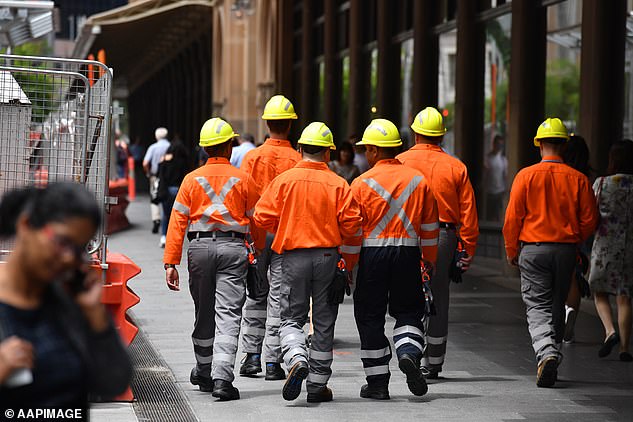 The Berejiklian government has defended the decision to suspend the building and construction industry, as it was deemed necessary to control the outbreak of the virus, especially in south-west Sydney (pictured, construction site workers in Sydney pre-lockdown)

Larger sites were allowed to continue at 25 per cent capacity, as long as all workers were confined to one site.

‘With the information that has come out of the government over the last 24 hours, the industry is calling for an immediate reopening,’ Mr Seidler said.

He said he has been in discussions with the state government and NSW Health about reopening some sectors of the industry.

‘If the government is not basing their closure on evidence of spread, then we’re calling on the government to open the industry as quickly as they closed it.’

Even if the sectors is allowed to run again, he said it will take about a month for workers to get sites back to the way they were running before.

Despite the frustration of countless workers who are off the tools indefinitely, NSW premier Gladys Berejiklian insists the decision to close the building and construction industry was necessary to ‘end the lockdown as soon as possible’.

‘We want to make sure our population can live as safely and freely as possible until we get a large portion of the population vaccinated,’ she said.

David Borger, an executive director specialising in western Sydney building projects, said workers have budgeted their work and living expenses based on their ongoing employment as key tradespeople.

Data released by the Australian Bureau of Statistics in June revealed unemployment in NSW had dropped to an encouraging 4.9 per cent.

The recent lockdown could see those figures increase to well over five per cent.

On Tuesday, NSW recorded 78 new Covid-19 cases – but 27 were out in the community while infectious.

Greater Sydney is enduring its fourth week of strict stay-at-home lockdown restrictions to slow the spread of the highly-contagious Delta variant.

SYDNEY’S LOCKDOWN: WHAT YOU NEED TO KNOW UNTIL JULY 30

Those living in Greater Sydney, the Blue Mountains, Central Coast, Shellharbour and Wollongong must abide by the following:

Masks are mandatory in all indoor settings outside the home, including offices and apartment buildings

Residents can travel only 10km from their homes

– Exercise and gather in groups of two while outside

– No browsing in supermarkets and retail businesses. Shop only for essential items

– Funerals are capped at 10, weddings are banned

– No car pooling with other households when going out for exercise

There is no curfew but a stay at home order applies, with only four reasons to leave your home

Schools are closed with at-home learning in place, but no child will be turned away if they need to attend in person

The new rules are in addition to the stay-at-home orders already in place until July 30, which include only leaving the home to:

*shop for essential items (one person only)

*give care and compassionate reasons (one visitor only)

*exercise or for work or education that cannot be conducted remotely

People in Fairfield, Liverpool or Canterbury in Sydney’s southwest are advised to stay home, unless:

*shop for essential items (one person only)

*give care and compassionate reasons (one visitor only)

*For work unless it is an essential service, such as health workers. Businesses must give employees the option of working from home.

* Any essential employees who are permitted to leave their suburbs for work are subject to the same restrictions previously in place, namely receiving a negative Covid test every three days.

The rest of NSW (including regional areas) is subject to the following restrictions:

When does the lockdown end?