Lindsey Graham slams Democrats for trying to sneak amnesty for millions of migrants into their $3.5trillion infrastructure package and claims there will be an unprecedented ‘run on our border’ if one gets legal status

Republican Sen. Lindsey Graham slammed Democrats for plotting to tuck in a provision to the $3.5 trillion reconciliation bill that would give undocumented immigrants a pathway to citizenship.

‘If you give one person legal status there will be a run on our border like you have never seen before,’ the South Carolina Republican said, calling it the ‘dumbest idea in the history of the Senate, the history of the White House.’

He added that it will ‘lead to the breakdown of law and order beyond what you see today.’ 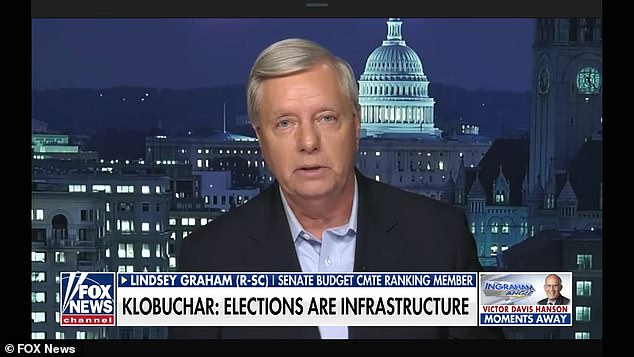 Sen. Lindsey Graham slammed Democrats for plotting to tuck a pathway to citizenship provision into the planned $3.5 trillion budget bill that will be passed using reconciliation

While Senate Democrats and Republicans came to an agreement on a rough framework for an infrastructure bill – negotiations are ongoing this week in the Senate.

Ten Republicans haven’t signed on yet, so the bipartisan deal is in jeopardy.

At the same time some of Biden’s ‘human’ infrastructure priorities will be part of the massive $3.5 trillion budget resolution bill, which Senate Democrats plan to pass using the filibuster-proof process of reconciliaton, meaning they can do it without any GOP support.

On Monday, President Joe Biden was asked if it was appropriate to use the budget bill as a vehicle to provide immigrants with a pathway to citizenship.

‘Well, first of all, I think we need to find pathways to citizenship,’ Biden told reporters after he gave an update on the economy. ‘The budget bill is an appropriate way to get around the filibuster to be able to make a judgment as to whether or not they should have a pathway. That’s for the … Parliamentarian to decide, though, not for Joe Biden to decide.’

The Senate’s Parliamentarian would have to rule on whether reconciliation could be used to pass the immigration-related provision.

‘It’s a power grab,’ Graham complained on Fox. He added that the package doesn’t have a ‘damn thing to do with infrastructure.’

Every month Biden has been in office there has been an uptick in crossing at the U.S.-Mexico border.

On Friday, Customs and Border Protection said 188,829 migrants were stopped at the southern border during the month of June, up from 180,641 who were apprehended in May.