Boris Johnson was last night outed by his former top aide over claims he dismissed a second lockdown because Covid was ‘essentially’ only killing the elderly and that he ‘didn’t buy’ claims the NHS would be overwhelmed.

But one of the Government’s scientific advisers told MailOnline today that while the Prime Minister’s remarks were flippant, there were signs in the data last autumn which suggested it was reasonable to ‘take a more measured approach’.

Leaked WhatsApp messages from October showed Mr Johnson was questioning predictions from his scientific advisers that hospitals could be pushed to the brink again if he did not put the country into another lockdown.

But on the day the text was allegedly sent — on October 15 — there were 4,569 Covid patients in the NHS. For comparison, there are now 3,813 but that figure is expected to continue rising due to surging infection numbers.

Messages leaked by Dominic Cummings, Mr Johnson’s former maverick chief of staff, also showed the PM resisted calls for the lockdown because ‘the people who are dying are essentially all over 80’.

Office for National Statistics data shows that the average age of Covid fatalities throughout the pandemic has been 80 — 78 for men and 82 for women.

Figures show over-80s made up 70 per cent of all Covid deaths at the height of the first wave and this dropped to about 60 per cent during the second wave.

Now the proportion of people over-80 dying form the virus stands at 47 per cent thanks to the rollout of the vaccines which were prioritised for the elderly.

Scientists accept that the NHS would have ultimately been overwhelmed in the winter if it were not for the second and third lockdowns — which came in November and then in December.

The NHS was already in a fragile state heading into the second wave in autumn after amassing a huge backlog from the first shutdown in spring, which tens of thousands of operations were delayed to make way for the influx of Covid.

But the emergence of the Kent variant in late September, which was only detected the following month and announced before Christmas, means it is difficult to know how the epidemic would have changed in the weeks after Mr Johnson’s comments, according to Professor Robert Dingwall, a member of the UK Government’s vaccine advisory group.

He told MailOnline: ‘I think there’s a lot of people’s predictions on both sides that were thrown out by the rise of the Alpha [Kent] variant which was clearly beginning to effect the figures in early November.

‘The Prime Minister could well have looked at the data at the time [in October] and decided that the higher projections from his chief scientific advisers were at the upper end of what was plausible and made the reasonable judgement to take a more measured approach.

‘His role as Prime Minister is to challenge the advice he was given and if he felt that the higher projections were not persuasive then he has no obligations to follow them.

‘Some of the advisers and modellers were lucky the Alpha variant pushed things up to coincide with their models or we might have been having an argument about over-estimations now.’ 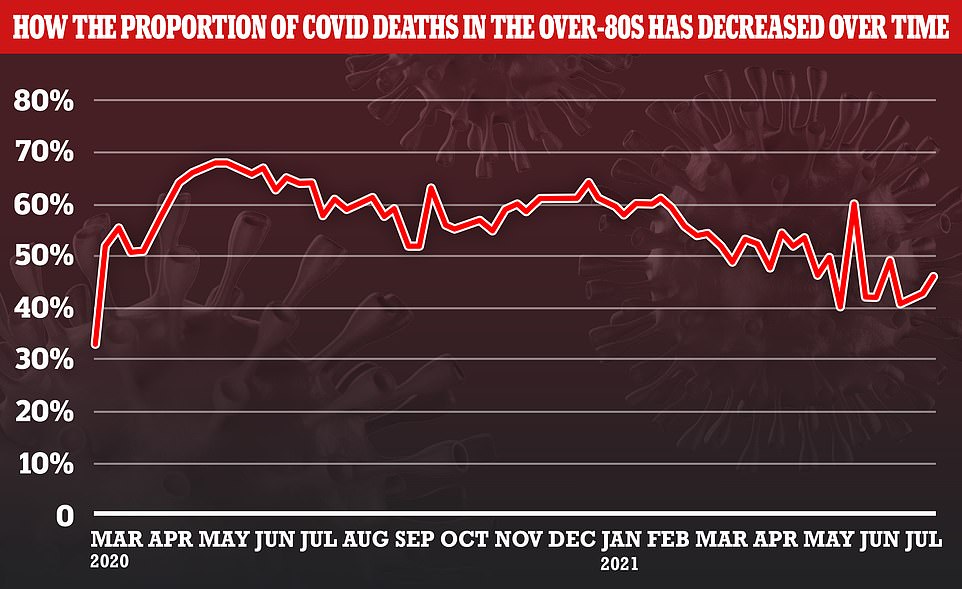 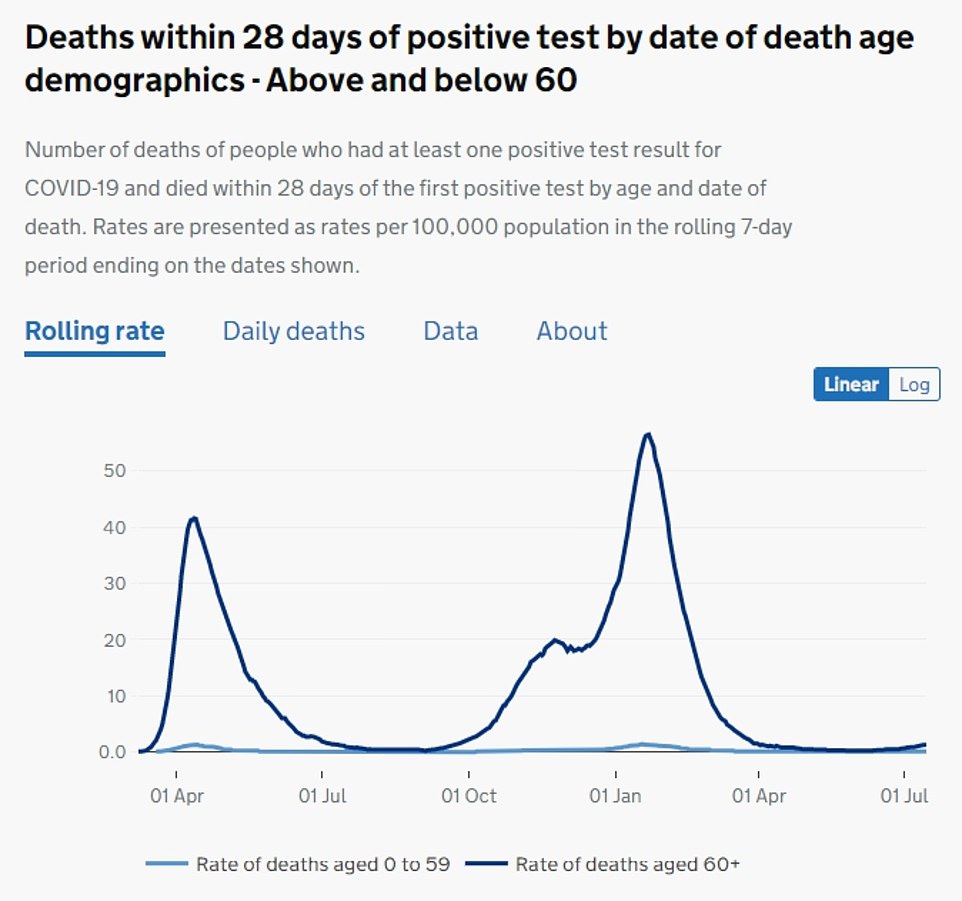 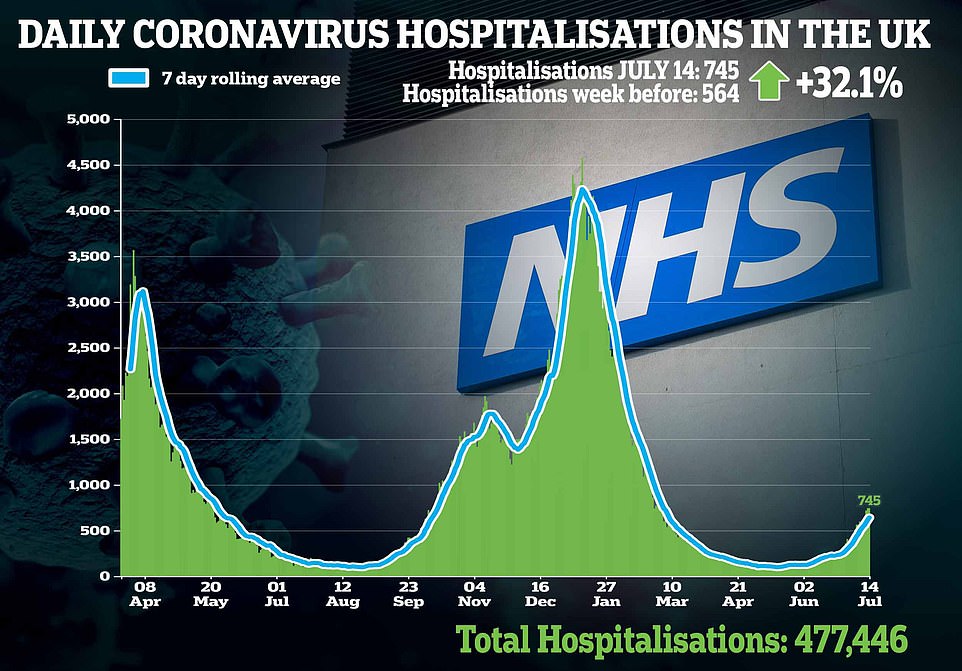 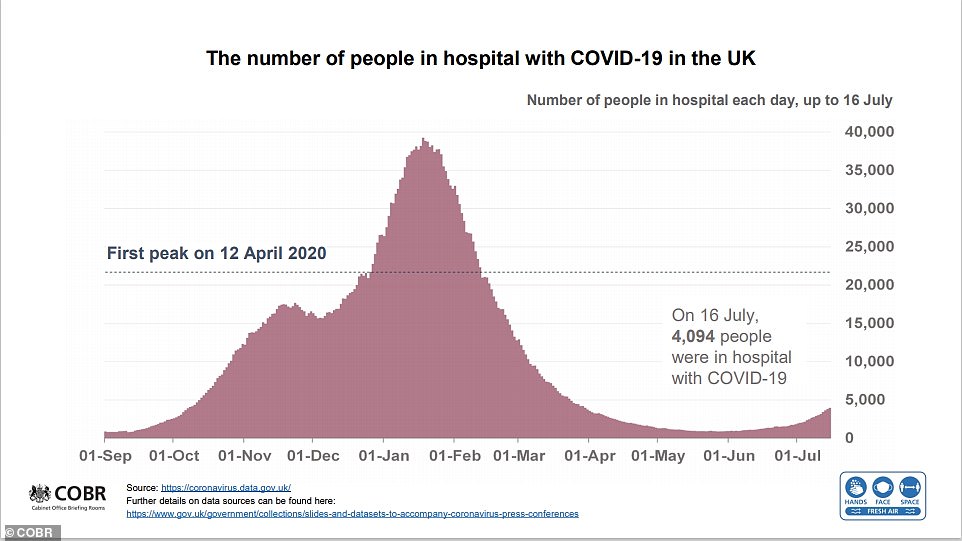 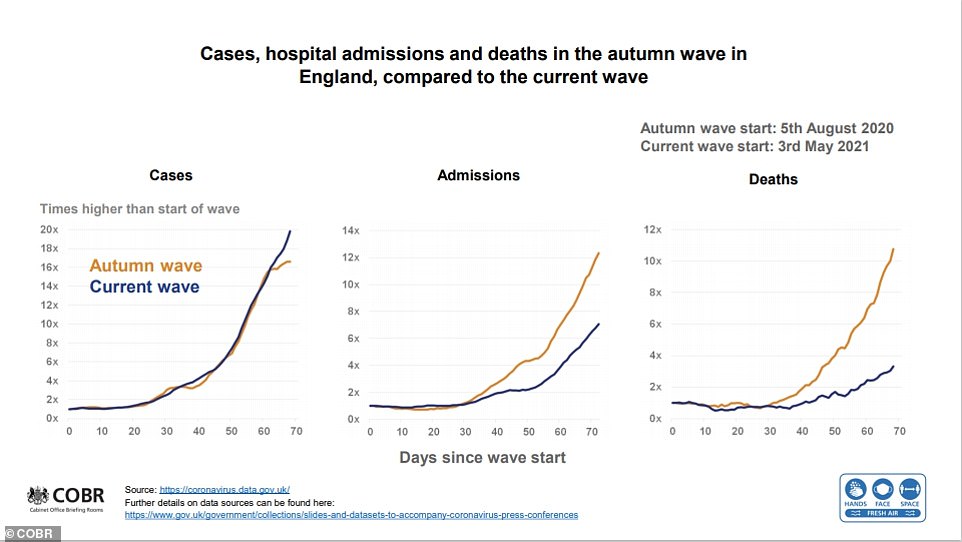 However, Dr Simon Clarke, a microbiologist at the University of Reading, said the writing was on the wall in October when Mr Johnson is said to have made the remarks.

There were nearly 1,000 admissions for the virus every day by October 15, which was quadruple the number the previous month and 150 daily deaths, up on the 20 or so a month earlier. The country was also heading into the winter, when Covid finds it easier to spread and kill.

Dr Clarke told MailOnline: ‘What you’ve got to remember is what had come before he made the comments. The evidence from the spring lockdown was that the NHS wouldn’t have been able to cope without a lockdown.’

Mr Johnson eventually caved into pressure from his scientific advisers and ordered a second lockdown in England on November 5. Daily hospital admissions peaked at 1,900 that month and fell over the four-week shutdown.

A third lockdown had to be imposed the following month when the epidemic began growing exponentially again due to the rapid spread of the highly transmissible Kent variant.

SAGE models that gave No10 the confidence to go ahead with Freedom Day yesterday said hospital occupancy should not even reach half of the levels seen in the second peak due to the success of the jab rollout.

But they admit that there could be 2,000 daily admissions during the worst of the third wave, which would still put significant pressure on the health service. Even now, trusts in Leeds, Birmingham, Inverness and elsewhere have already had to start cancelling operations.

Top NHS doctors, including Stephen Powis, the medical director in England, are confident the national NHS will ultimately be able to cope.

The difference between this wave is that people being admitted to the virus are presenting with more mild symptoms and are being discharged quicker, due to a combination of the vaccines and the fact young people make up a higher proportion of admissions.

However, there could be challenges for the NHS in juggling the Covid pressures with trying to clear the backlog of 5million patients waiting for routine surgery in England. Health Secretary Sajid Javid said this number could rise to an extraordinary 13m by the end of the year.

And infectious disease experts have warned that the country could be in for one of the worst flu outbreaks in years because so few people have natural immunity – a side effect of lockdown.

Mr Johnson’s flippant comments about the second wave were revealed in a BBC interview Mr Cummings gave to the BBC, which is due to air tonight at 7pm.

In his first broadcast interview, with the BBC’s Laura Kuenssberg, the hostile former aide accused his one-time boss of putting ‘his own political interests ahead of people’s lives’.

He also revealed that the Prime Minister also wanted to carry on meeting the Queen in person while Downing Street was rife with Covid, eventually backing down when it was pointed out he could kill her.

Mr Cummings has repeatedly accused the Prime Minister of being too slow in imposing the second lockdown. The political adviser, who left Downing Street during a bitter row in November, shared a series of messages from October 15 that appear to be from Mr Johnson to aides.

‘I must say I have been slightly rocked by some of the data on covid fatalities. The median age is 82 – 81 for men 85 for women. That is above life expectancy. So get COVID and live longer. Hardly anyone under 60 goes into hospital (4 per cent ) and of those virtually all survive. And I no longer buy all this nhs overwhelmed stuff. Folks I think we may need to recalibrate,’ they read.

‘There are max 3m in this country aged over 80. It shows we don’t go for nation wide lockdown.’

In his first TV interview since leaving No 10, Mr Cummings claimed the PM ‘put his own political interests ahead of people’s lives for sure’.

He said Mr Johnson’s attitude last autumn was a ‘weird mix’ of ‘partly ‘it’s all nonsense and lockdowns don’t work anyway’ and partly ‘well this is terrible but the people who are dying are essentially all over 80 and we can’t kill the economy just because of people dying over 80′.’

However Tory MPs rallied behind Mr Johnson. Peter Bone has dismissed Mr Cummings’s allegations, saying the former aide was driven by revenge and had failed to prove a series of explosive claims he made about the inner workings of No 10 before parliamentary committees in recent months.

‘He didn’t provide the evidence when he was before the select committees, which he promised to do. He failed miserably to do that,’ Mr Bone told the BBC.