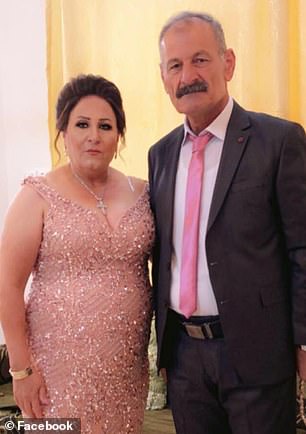 Removalist family tragedy: Saeeda ‘Sandy’  , Akobi Jjou Stu left, was found dead on Monday after testing positive to Covid-19, leaving behind her husband Adel (right). Mrs Shawkwa is the mother of the twin removalists who were charged for travelling to regional NSW while infectious

The mother of the coronavirus-infected removalist twins who travelled to regional NSW tested positive the same day as her sons before she died three days later.

Saeeda Akobi Jjou Stu, 54, was found dead in her home in Green Valley in Sydney’s south-west about 9.15am on Monday.

Just 48 hours before her tragic death, police charged her removalist sons Roni and Ramsin, 27, for travelling to regional NSW while infectious with the virus.

Neighbours told Daily Mail Australia Mrs Shawka’s shock at the hefty punishment her sons faced as well as the public shame from the men allegedly breaching public health orders contributed to her death.

But it has since emerged that she was tested at the same time as Roni and Ramsin last Thursday night and they had no idea she was infected when they left.

She, along with her sons who moved from Iraq in the past decade, received a call from NSW Health the next day to say she was positive, the Daily Telegraph reported.

The Shawka twins, their mother, father, sister and several young children were all understood to have been living together in the five-bedroom Green Valley home.

Daily Mail Australia understands Saeeda’s daughter found her lifeless body ‘with a sweet laugh’ after checking on her because she slept in so late. 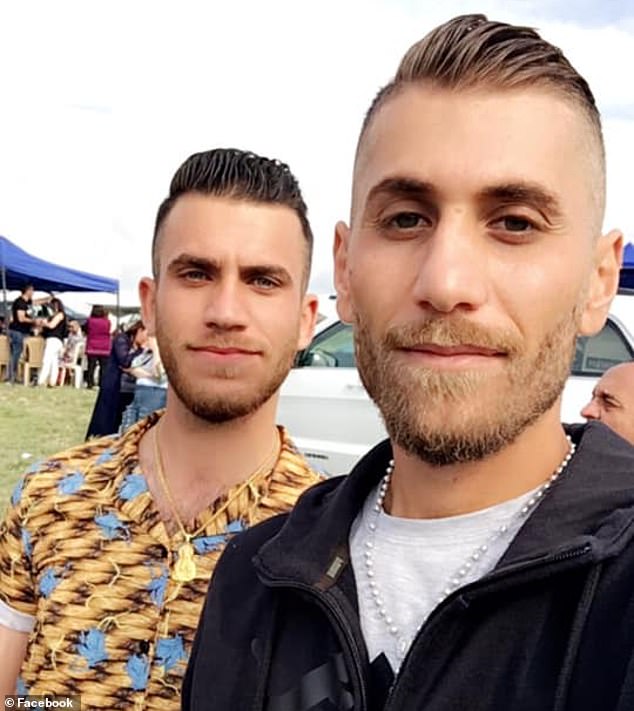 Pictured: Roni (left) and Ramsin (right) Shawka, who lost their mother on Monday morning after she died from Covid-19 – days after they were accused of driving around regional NSW despite being told they had tested positive to the virus 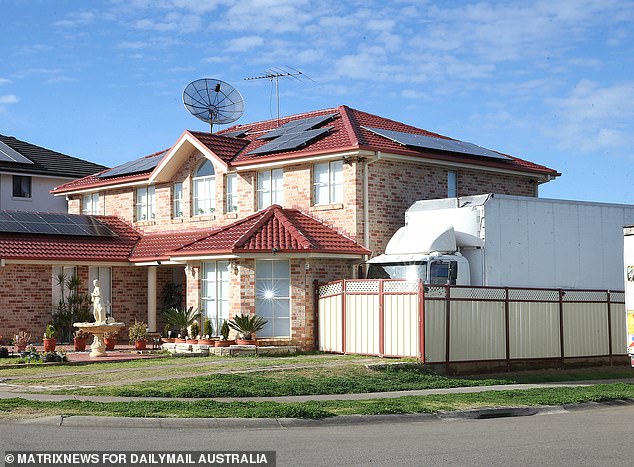 The family all live together at this five-bedroom home in Green Valley in Sydney’s south-west. The twins’ removalist truck was safely deposited by the side of the home while the grieving family isolated and mourned together on Tuesday

Saeeda was suffering from a nasty cough and had been complaining about breathing difficulties, neighbours said, however her death came rapidly.

NSW’s chief health officer Kerry Chant said on Tuesday that it was possible for Covid patients to ‘deteriorate rapidly’.

She also revealed the NSW Health offered to put the family into a healthcare facility because of their living situation but they declined.

‘That family were offered care and were offered transport to an alternate facility … they made the decision to stay at home,’ Dr Chant said.

‘The local health district has got a lot of services for managing a large number of people in that area, and have got clinical outreach care teams.’

Grieving family members are also attributing Saeeda’s sudden death to the ‘shock’ of the punishment faced by her boys, her neighbours said. 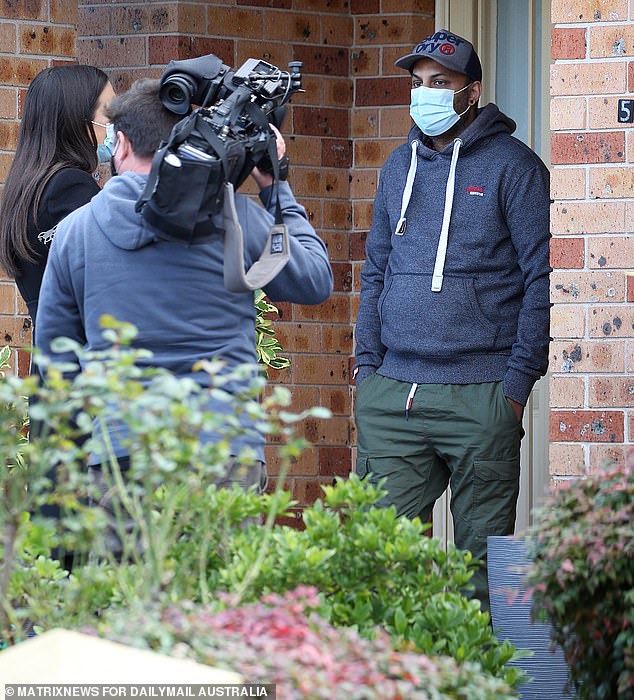 ‘The shock of learning her boys were fined $22,000, that’s what did it (killed Mrs Shawka),’ one neighbour said.

‘That and just the heartbreak of seeing her sons faces all over the news. The fear of being spat at in public, of being shamed. All over a mistake.’

Another claimed: ‘The virus has obviously spread in their household and there’s been not too much movement there.

‘And then on Sunday night, this. That’s what her family knows. It was shock and a broken heart, that’s what killed her.’

Roni and Ramsin were in Orange, in the state’s Central West, about 2.30pm on Friday when Roni was called by NSW Health and told he had tested positive.

The pair, and fellow co-accused Mario Shanki, then allegedly traveled on to Molong, about 30 minutes away, to complete their delivery.

There they were intercepted by local police and charged with breaching the public health orders.

If found guilty, the pair could face six months’ jail time or an $11,000 fine each. Their alleged act was branded ‘thoughtless’ and ‘blatant’ by Police Minister David Elliott.

But Roni and his boss, Amin Yousef, blamed their poor English skills for what they said was an unfortunate misunderstanding. 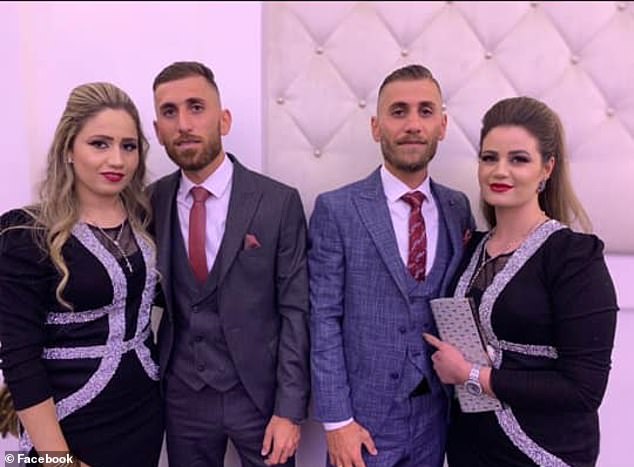 Pictured: Ramsin (left) and his twin brother Roni with their partners at an event. Both men have Covid-19 and are accused of travelling through regional NSW despite being aware of that 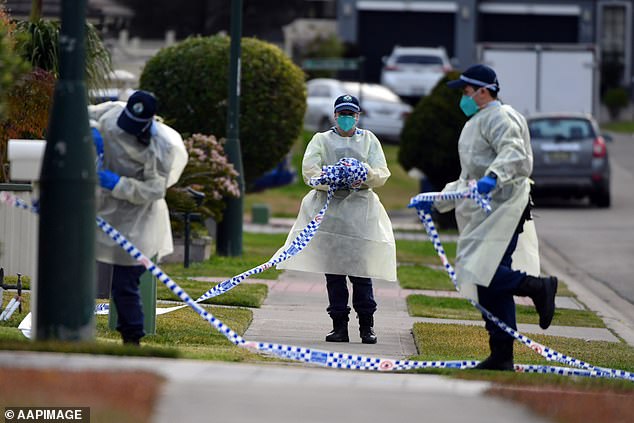 Neighbours said the woman had only tested positive for the disease three days earlier, had a nasty cough and had been complaining of breathing difficulties. Seen here is the street in lockdown where the family live 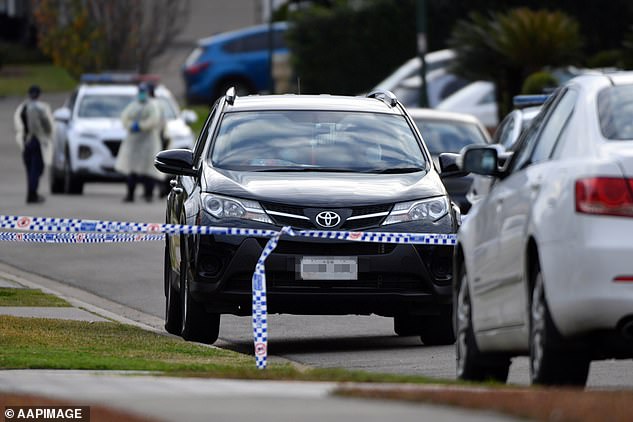 Mrs Shawka’s family members were forced to quarantine in their cars, out the front of the home, while police in personal protective equipment investigated

Why was Mrs Shawka at home?

NSW Health was aware the woman had contracted the virus before she died, chief health officer Dr Kerry Chant confirmed on Tuesday.

However, Mrs Shawka chose not to go to hospital, and was receiving medical support ‘in the community’.

‘Care was offered and there was care around the family,’ Dr Chant told reporters.

‘That family were offered care and were offered transport to an alternate facility to support them with their isolation and care … they made the decision to stay at home.

‘I think it’s important to know … you can deteriorate quite quickly with Covid.’

Distraught relatives who arrived on the scene after Saeeda’s death on Monday were forced to quarantine in cars and face masks out the front for up to six hours, while police in PPE investigated.

‘It was pretty cruel,’ said neighbour Sam, a restaurant owner. ‘They had to just sit and wait while that was all going down.’

For locals, it was clear to some that something was amiss even before they saw the news.

Saeeda’s husband Adel had stopped coming out the front to clean the truck, and she  was no longer tending to the garden.

Next door neighbour Mrs Ta said she’d never heard the house so quiet since they first moved in in November 2019, and questioned whether something was wrong.

The daily tradition of Saeeda waking up early and going to buy fresh bread for the family stopped about four days ago, as did the strong smell of home cooking.

Sounds of laughter and Arabic phone calls have since been traded for ‘endless crying,’ the woman said. 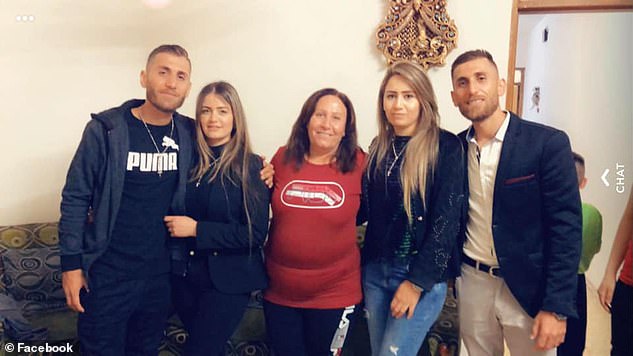 Heartbroken Roni called his mother ‘his life’ in a Facebook tribute.

‘Mama, my love, you are my life,’ he wrote in a heartfelt comment which attracted hundreds of people to the post to offer condolences. ‘Mama, you are my comfort and my life, Mama’.

Sam said: ‘Normally, we’d take over some hot meals. We’d drop off flowers, or ask if there is anything we can do to help. We’d try to stick together, but in this case we can’t.

‘They’re all alone. Those boys are probably feeling immense guilt, their self esteem shot.

‘Their father is now a widow. These are good, honest, working class people. It’s horrible to know we’re so close but still can’t help them.’

From trouble to tragedy: How Covid-positive twin removalists who travelled to regional NSW returned home only for their mother to die 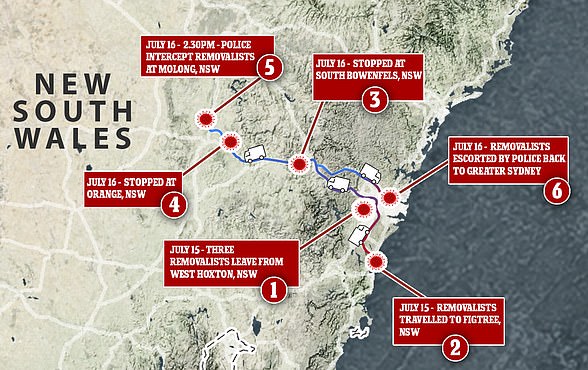 The four-man removalist crew were already in Orange when NSW Health called to inform Roni that he had tested positive to the highly contagious Indian Delta strain. Seen here is a map of their route

Their boss at On Time Removals, Aram Yousif, asks them to get a Covid test pefore proceeding to the state’s far west, on the next leg of their journey.

Mr Yousif was told: ‘Aram we are very healthy, we have no symptoms, why should we do the test?’

The removalists get tested but allegedly proceed on to Orange, in the NSW Central West, rather than isolating as required by law.

FRIDAY – About 2.30pm, police in Molong speak to the removalists after receiving a tip they had travelled from Sydney’s south-west.

Police determine the men had travelled from West Hoxton to Figtree, near Woolongong, and then on to Molong.

They officers learn the men allegedly had pit stops at South Bowenfels and Orange along the way.

Officers allege that while in Orange, one of the crew received a call from NSW Health saying they had tested positive to Covid-19.

However, three of the men then continued to Molong, police claimed.

Those men – twins Roni and Ramsin Shawka, both 27, and Maryo Shanki, 21 – were charged with breaching the health orders and escorted back to Sydney.

SATURDAY – The crew is criticised by Police Minister David Elliott, who described their alleged actions as an ‘unfathomable’ and ‘blatant’ breach of the law.

‘This thoughtless act has now placed our regional communities in New South Wales at the greatest risk so far with this pandemic,’ Mr Elliott said in a press release announcing the charges.

Mr Elliott warns the men could face six months’ imprisonment and/or an $11,000 fine each, if found guilty of violating the public health order.

Both Roni Shakwa and his boss, Mr Yousef, tell media outlets the crew had poor English skills and what happened was a misunderstanding.

Roni told The Daily Telegraph he felt ‘very bad’ about travelling so far with the virus but said ‘it’s not my fault’.

Mr Shawka recounted that he was driving in Orange when he got a call from a NSW Health saying to stop working and go home.

‘I gave them the number of my boss, I told them my language is not very good,’ Mr Shawka was quoted saying.

Her children are forced to quarantine in the car on the street outside the family home for up to six hours.

In a statement, NSW Health confirms that Saeeda was Covid-positive at the time.

‘NSW Health today sadly reports the death of a woman in her 50s who was a confirmed Covid-19 case,’ a representative said.

‘She was a resident of south western Sydney and a close contact of a Covid case.’