President Joe Biden’s $1 trillion bipartisan infrastructure bill sits on the brink Tuesday as Senate Democratic Leader Chuck Schumer is determined to go ahead with a vote on the matter as Republicans say the numbers aren’t there.

Democrats need 10 Republican votes to move the bill through the legislative process if all 50 members of the Democratic caucus vote together. Schumer has scheduled that vote for Wednesday. Republicans say the numbers aren’t there and are asking for a delay.

Senate GOP leader Mitch McConnell and his leadership team are encouraging Republicans to vote against the bill until more details are available, including how it will be paid for.

‘I think we need to see the bill before we decide whether or not to vote for it,’ he said. 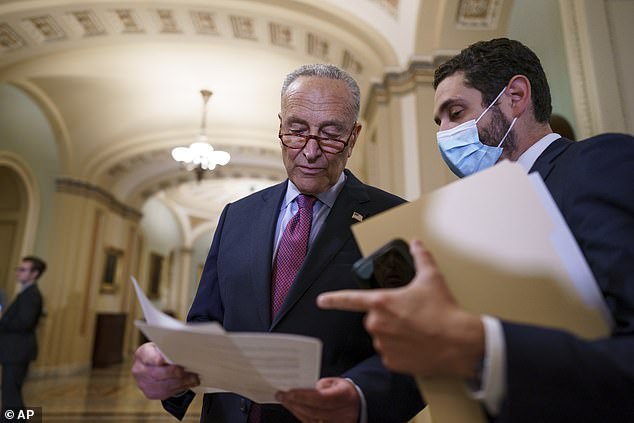 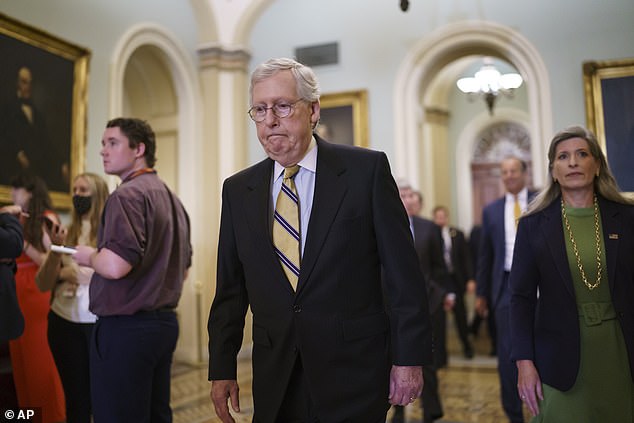 ‘We have a pretty good sense of where our members are. They won’t get 60,’ Senate Minority Whip John Thune said. ‘Our members are committed to actually having a bill and scores and all that kind of stuff before they vote to get on a bill.’ 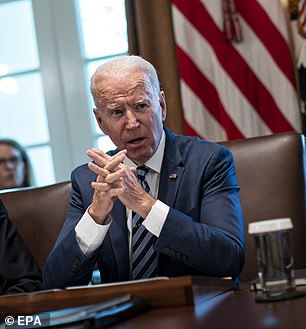 Schumer argues there can be a vote for a shell bill on Wednesday with the details filled in before the Senate takes a final vote on the legislation. Republicans have rejected his offer.

He says voting on the shell bill can speed up the legislative process with a fuller infrastructure deal replacing it later.

The bipartisan group of senators negotiating the contents of the legislation have been working almost around the clock to figure out a compromise way to pay for it, having stuck down ideas such as boosting the gas tax drivers pay at the pump or strengthening the Internal Revenue Service to go after tax evaders.

The legislation contains almost $600 billion in new spending that needs to be funded.

Republicans working in that group are pushing for the vote to be delayed to Monday.

‘I still hope that he can be prevailed upon to delay the vote until Monday,’ said Republican Senator Susan Collins of Schumer. ‘There’s absolutely no reason why he has to have the vote tomorrow, and it does not advance the ball. It does not achieve any goal except to alienate people.’

‘Monday would be sufficient time for us to get all the remaining issue solved, and socialize the legislation with that with our colleagues so they know they want to vote, and that’s unanimous among Republicans,’ said GOP Senator Mitt Romney.

Schumer is pushing for Wednesday’s vote to go forward and denying GOP charges that this is a ploy to either get them to come to the table or to let the vote fail so Democrats can move on to their $3.5 trillion ‘human’ infrastructure package – filled with the social programs that top President Joe Biden’s agenda.

Schumer also set a Wednesday deadline for Democrats to come to an agreement on what will make up their $3.5 trillion ‘human’ infrastructure bill and how it will be paid for.

Senate Democrats will try and pass this measure without a single GOP vote, through a process called reconciliation which allows them to skip the usual 60 vote thresh hold to move legislation forward.

A top priority of President Biden’s, the bill needs all 50 Senate Democrats on board, including moderates like Sen. Joe Manchin, who has questioned all the legislation will be fully funded. 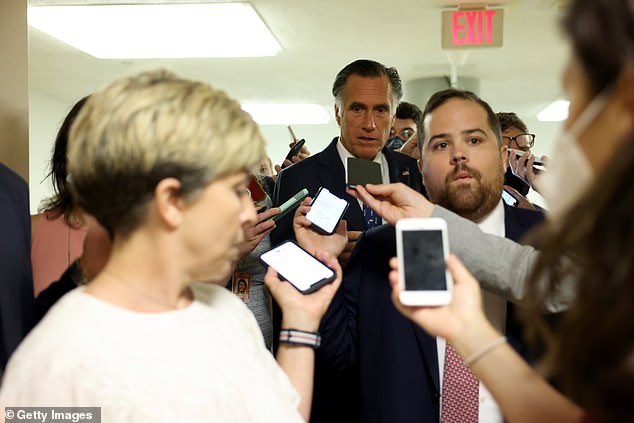 Liberal House Democrats are egging Schumer on, eager to get to the ‘human’ infrastructure bill. And they’re showing their frustration with the slow pace of the legislative process.

‘They’ve been killing time for months,’ Democratic Rep. Alexandria Ocasio-Cortez said Tuesday. ‘It’s starting to get to a point where this bipartisan effort is seeming to serve less on investing in our infrastructure, and more the end of just delaying action on infrastructure. It has been enough.’

‘Hopefully this vote is going to be it,’ she said. ‘I hope Sen. Schumer sticks to that and says, ‘This is the deadline; if we don’t reach cloture, we’re moving on.’ Because it’s been too long, and we’ve wasted several months.’