Australia’s longest python species was photographed crossing the street at Cape Tribulation in the Daintree Rainforest, not paying any attention to the fact it was blocking the road for cars trying to pass by.

The scrub python was pictured slithering across an outback road by a photographer who posted the photo in a ‘Save the Daintree’ Facebook group.

Highlighting its extraordinary size is a man seen casually, hands in pockets, following closely behind the reptile. 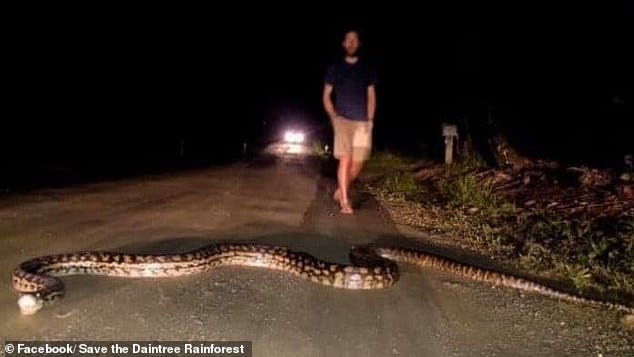 ‘How would that fit inside a dunny bowl?’ Said one.

‘We saw one a few years ago, at least this size draped across the road whilst driving at night from the Tablelands down into Cairns. We were very lucky to witness such a beautiful specimen and stopped the car and blocked traffic until it had moved on. It was so big we initially thought it was a large tree branch in the road,’ said another.

‘I was blessed to see one at night, coiled up in a tree, the first time I visited the Daintree 20 years ago. Such a beautiful colour,’ a third added.

Also known as the ‘amethystine python’ due to its sparkling opal appearance, the snake prefers to live in warm and dense rainforests with easy access to water.

The ‘scrub python’ is Australia’s longest snake and can grow up to a whopping 8.5m long.

Ranked six on the the list of largest snakes in the world, a typical adult scrub python measures between two to four metres with females weighing in at 15 kilos, while males are generally smaller at an average of five kilos.

The largest has been confirmed to tip-the-scales at an extraordinary 30 kilos.

Although by far the most terrifying looking snake you could encounter, the good news is the reptile isn’t venomous and can’t hurt you – unless you’re a wallaby.

Known to eat wallabies, the snake is also known to consume birds, bats, rats, possums and other small mammals including the odd pet cat – a reason there aren’t many feral cats in the Daintree.

Not overly fussy with its fare, there are many recorded cases of large pythons in Australia stomaching such items as stuffed toys and kitchenware. 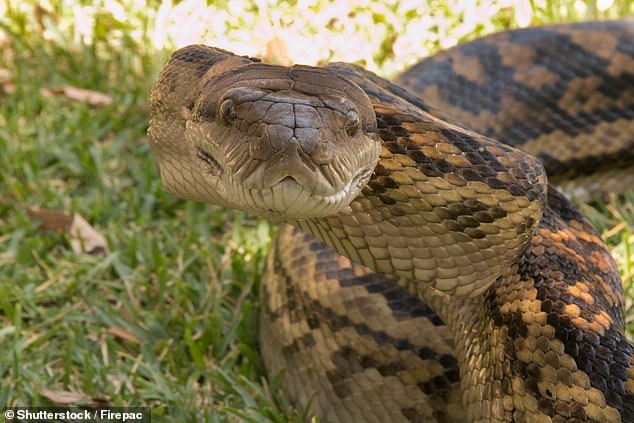 The ‘scrub python’ is Australia’s longest snake and can grow up to a whopping 8.5m long

The python eats its prey, killing and crushing it as it digests its meal.

Found primarily off the beaten track, much to the distress of locals, the reptile can also be regularly found slithering through the suburbs.

The scrub python has inbuilt infra-red or heat-sensitive labial pits that allows them to detect, stalk and strike prey accurately at night. 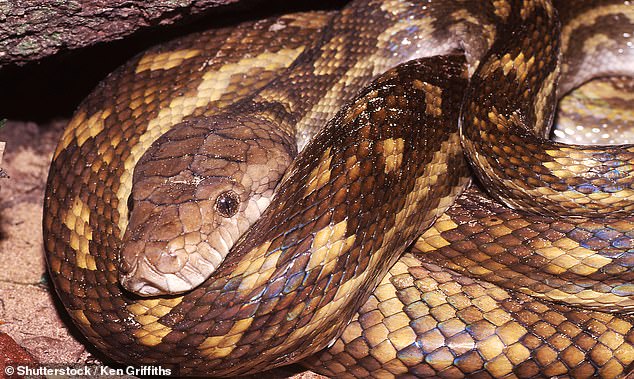 Found primarily off the beaten track, the reptiles are still regularly found slithering through Australian suburbs much to the surprise of locals

What is the Amethystine Python?

Also known as the scrub python, the reptile is non-venomous.

The species is found in Indonesia, Papua New Guinea, and Australia.

The snake is named as such because when it is viewed from certain angles in direct sunlight, it displays an amethyst or sparkly shine all over its body.

Popular among reptile enthusiasts, and noted for its colouration and size, it is one of the six largest snakes in the world, as measured either by length or weight, and is the largest native snake in Australia and Papua New Guinea.

There is no record of Amethystine pythons being dangerous to human beings and they will do everything possible to avoid human contact.

They are usually found in or near tropical rainforest and are generally nocturnal and aboreal, although they can be seen sunning themselves during the day.

Amethystine pythons are carnivores with their diet including birds, bats, rats, possums, and other small mammals.