HazMat crews and fire officials quickly responded to the scene and began treating and decontaminating patients who were suffering from respiratory distress before shuttering the park, officials said.

The park will remain closed while an investigation is conducted and and safety protocols are reviewed.

Officials said 26 people were transported by an ambulance bus to a local hospital, including a woman who was in labor, while 39 people refused hospital treatment.

The most serious case was a female child who was taken to Texas Children’s Hospital, officials said.

‘Several hours ago we were dispatched to the Splashtown park and a normal Saturday turned out a lot differently,’ Spring Fire Chief Scott Seifert said during a press conference on Saturday evening.

‘With the patients that were brought to us, we decontaminated well over 60 people with our ladder truck. We went ahead and had them all walk through there and then they were analyzed by Cypress Creek EMS.’ 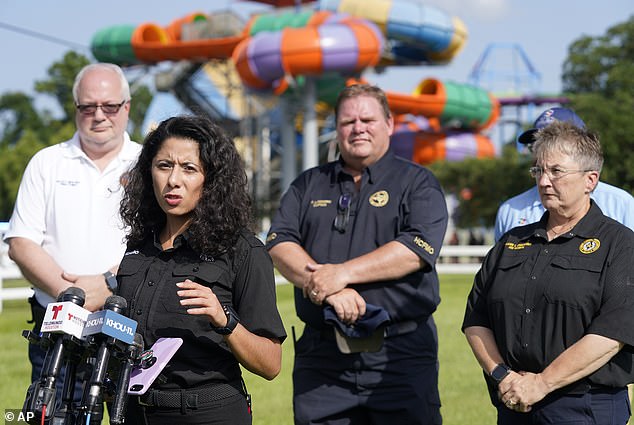 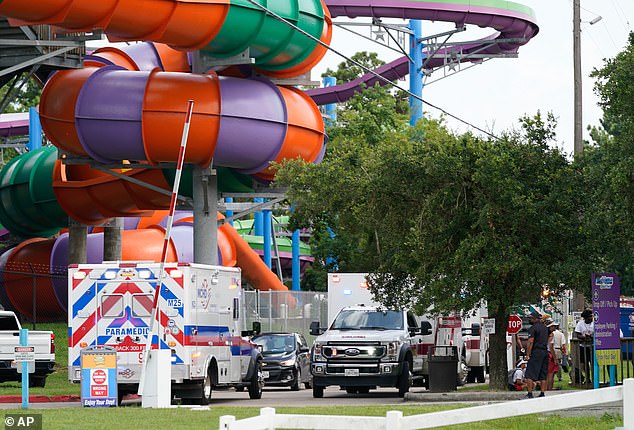 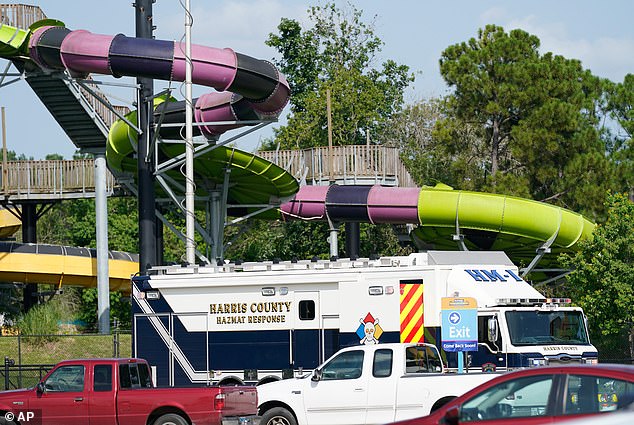 Officials said 26 people were transported by an ambulance bus to a local hospital, including a woman who was in labor, while 39 people refused hospital treatment 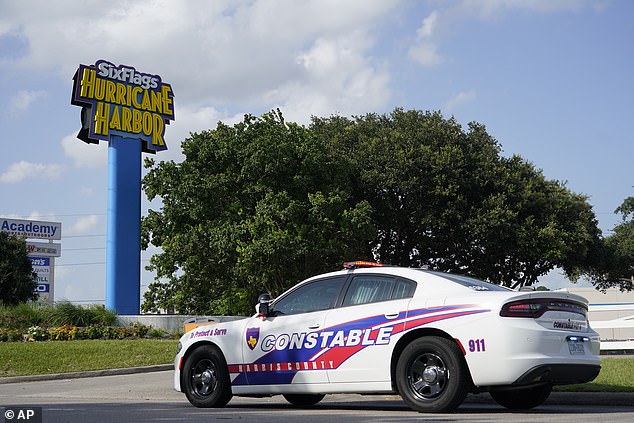 Chief Seifert explained that the fire department’s ladder truck raised a nozzle and sprayed water down on an area about 15 feet people in order to decontaminate the park’s patrons.

‘They walk through there and they basically massage their eyes and things like that to get any chemicals out of their eyes if they are affected. No soap or nothing like that,’ he said.

Seifert said the patients suffered respiratory distress like difficulty breathing but they didn’t see any patients with chemical burns.

However, he acknowledged ‘it is possible’ for patients to have experienced burning sensations in their skin ‘depending on the amount of chemical’ when asked by another outlet to respond to claims from one woman who said she suffered burns.

‘Just recently we learned that the chemical combination was about 35 percent sulfuric acid and 10 to 13 percent bleach,’ Seifert said.

Lawhorn explained that the HazMat team then assisted Six Flags crews in securing the chemicals ‘in, for the most part, a controlled system.’

The HazMat official explained that the park’s pools operate on a pH balance system where a pH balance of 7 is what they consider safe. Different chemicals are injected separately into the water which circulates through the park’s system.

‘They have a system that balances different chemicals that allows them to keep it at 7. So we’re looking at that system,’ Lawhorn said. 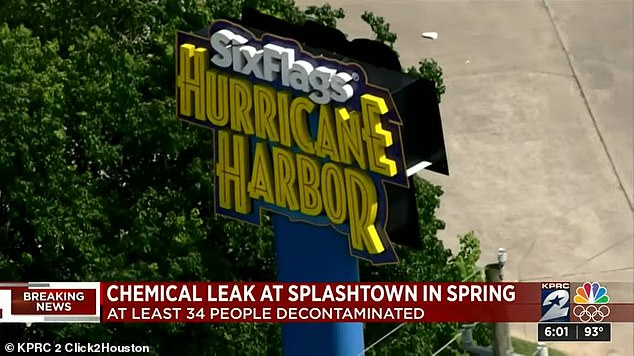 The chemical leak happened at the Hurricane Harbor Splashtown park, which is owned by Six Flags 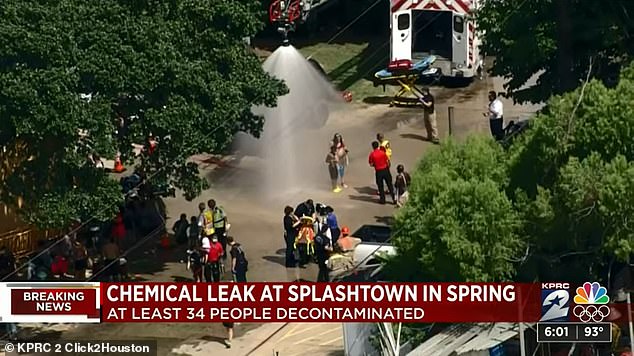 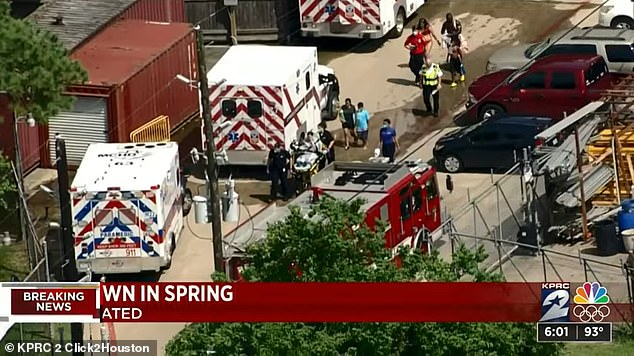 Lawhorn said both fire marshals and Six Flags crews checked the pH balance of the water and said that they were ‘good readings.’ He added that the park’s maintenance team’s policy is to pull people from the water if the pH balance hits either 6 or 8.

‘That tells us, by the time the sample was taken, the situation at least form what could be measured wasn’t showing anything off,’ Judge Hidalgo said.

‘So that’s why we don’t know exactly what happened prior that would make people getting sick.’

She added: ‘That’s why they’re not saying exactly what chemical it was because it’s not clear right now but something obviously went wrong.’

‘They should, it would stand to reason, have systems in place where the minute there is something wrong the system would record that. So we need to see if under the regulatory framework that’s in place before they open again.’ 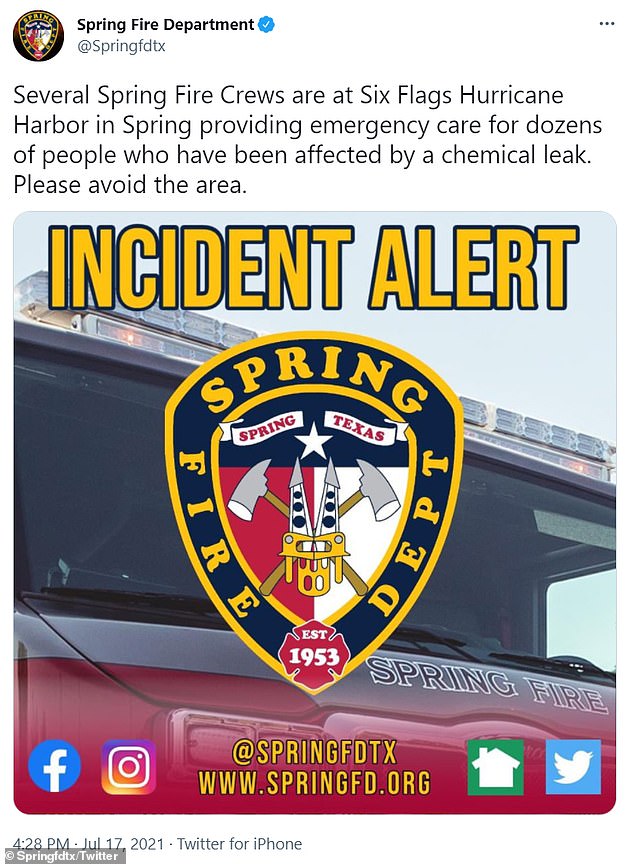 The Spring Fire Department posted about the chemical leak on Twitter, warning people to avoid the area 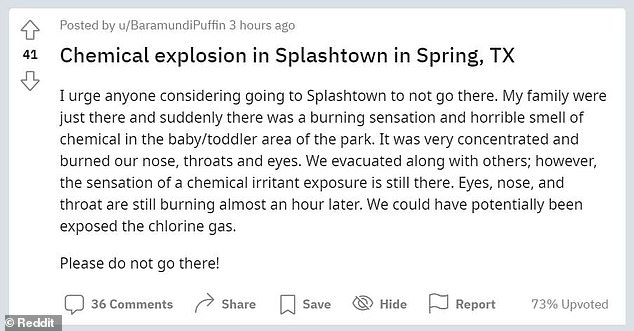 Harris County Fire Marshall Laurie Christensen said her office will determine if the Splashtown is safe to reopen in a few days.

‘They have been cooperative. They are working with our investigators and our inspections team,’ she said.

‘It was just inspected for its life safety plan and those sorts of things,’ she said.

Scott Jeansonne, the compliance and environmental programs manager for Harris County Public Health, said his agency conducts health and safety inspections for the actual pool facilities and permits them.

‘The facility was last inspected at the end of April this year,’ he said.

DailyMail.com has reached out to Six Flags for more information and additional comment.

A Splashtown visitor had posted to Reddit earlier in the day warning others to stay away from the park because of a ‘horrible chemical smell’ coming from the park’s baby and toddler section.

‘I urge anyone considering going to Splashtown to not go there,’ Reddit user BaramundiPuffin wrote.

‘My family were just there and suddenly there was a burning sensation and horrible smell of chemical in the baby/toddler area of the park.’

The Reddit user added: ‘It was very concentrated and burned our nose, throats and eyes. We evacuated along with others; however, the sensation of a chemical irritant exposure is still there. Eyes, nose, and throat are still burning almost an hour later.’

The Reddit user speculated that they had been exposed the chlorine gas, a poisonous gas once used as a chemical weapon in World War I.

One woman interviewed leaving the park told KPRC: ‘Even as I was holding items, I just felt burning everywhere – my hands and legs.’