Boris Johnson and Chancellor Rishi Sunak are at loggerheads over plans for a new £10 billion-a-year ‘health tax’ to clear the NHS Covid backlog and fund reforms to care for the elderly.

They even claim that when Mr Javid was appointed, he was told by the Prime Minister that joining forces with him against the Chancellor was a condition of his employment.

Mr Sunak – the favourite to succeed Mr Johnson when he eventually leaves Downing Street – fears that his ambitions will be damaged if he is bounced by No 10 into raising taxes.

But Mr Javid, who replaced disgraced Matt Hancock last month, has told allies that as ‘the UK has maxed out its credit card’, the NHS backlogs and social care reforms can only be tackled with new taxes. 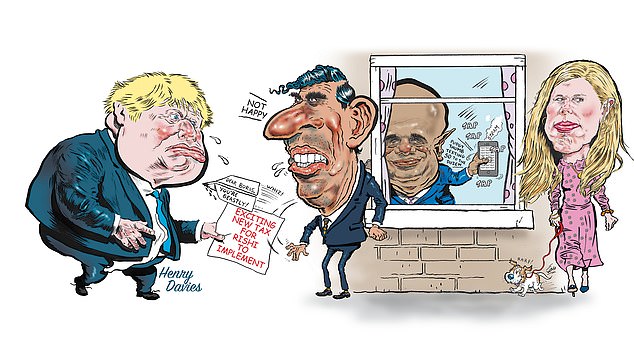 Under the plans being thrashed out between No 10 and No 11, the Government would introduce a new tax equivalent to 2p on income tax to raise an extra £10 billion a year to tackle, firstly, the backlog of operations caused by the pandemic.

A total of 5.3 million people are waiting for routine operations and procedures in England, and Mr Javid has warned that the figure could reach 13 million.

Once the backlog has been dealt with, the new money would be used to reform the social care system to reduce the burden on families.

Mr Johnson has told the Treasury that he is prepared to accept the plans drawn up ten years ago by Sir Andrew Dilnot, who carried out a review of social care, which limited to around £50,000 the amount that families have to pay towards care – with the state stepping in to cover the rest.

A source told The Mail on Sunday: ‘Boris told Rishi it [the extra health costs] had to be sorted.

‘Rishi said there wasn’t enough money to cover it and the only way to fund it would be a new tax. So Boris said, “Fine, let’s have a new tax.” ’

The source added: ‘When the PM brought in Sajid, he told him that he had to back him against the Treasury on this, so Rishi is being ganged up on. We promised in the manifesto not to raise income tax, national insurance or VAT.’

The issue has returned to the political agenda because this week marks the second anniversary of Mr Johnson’s arrival in No 10, when he promised to ‘fix the crisis in social care once and for all’. 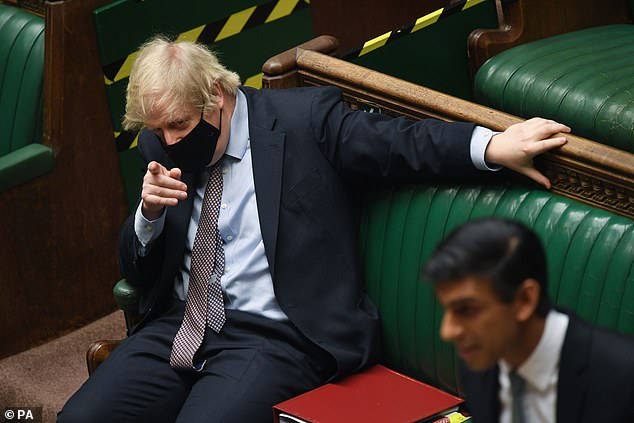 An announcement on the plans is expected before MPs go away for their summer holidays.

Mr Johnson supports the idea of putting a cap on the personal contribution to care because he made a manifesto promise that families would not have to sell their homes to pay for the costs.

But Mr Sunak is concerned about the regional imbalances: £50,000 represents a small fraction of the average £696,000 London house price – compared with more than a third of the £140,000 average in Hartlepool.

This means the Treasury would have to pick up the vast majority of care costs in the South East.

Former Cabinet Minister Damian Green is among a number of Tory backbenchers backing an alternative plan which limits the personal contribution towards care costs to 30 per cent of house values, which would limit the net cost to the taxpayer to around £2 billion a year.

Five ways they could raise the money…

Here are some of Boris Johnson’s options for finding the billions to transform social care.

Mr Green told The Mail on Sunday this would ensure that, ‘in all areas of the country, you can be sure that the same percentage of your assets will be preserved, which is a good deal fairer’.

The row is the latest sign of tensions between No 10 and No 11 over Mr Johnson’s desire to push through billions of pounds of uncosted spending plans, including a ‘Marshall Plan’ for global green growth, grand infrastructure projects and even a new £200 million Royal yacht.

Successive Prime Ministers have promised to tackle the social care time-bomb, only to kick it into the long grass when the size of the undertaking became clear.

Since the Dilnot Report was published during David Cameron’s Premiership, the number of over-65s has risen by 1.7 million.

Writing in this newspaper the week he became Health Secretary, Mr Javid said the NHS backlog ‘is going to get far worse before it gets better’.

An ally of Mr Javid said: ‘He sees it as, “The UK has maxed out its credit card”.

‘It’s not viable – you have no capacity in the system for future crises. You are too sensitive to interest rates.

‘If they suddenly jump, you would end up going to Parliament saying you need to cut spending because you were left with no choice. No Chancellor wants to be at the mercy of markets.

‘He thinks the Government has to get the money from somewhere to start balancing the books.’

Another ally said: ‘You either raise tax, or cut spending.

‘But there are no more places to cut after the Osborne years. If there is nowhere to cut, then you have to raise taxes.

‘He [Javid] knows that nothing is for free.

‘While it was right to borrow to fund the pandemic, you’ve still got to remain credible to bond investors by showing you will get your finances under control.

‘Because everyone knows that eventually you’re going have to reckon with this debt, they expect future higher taxes and, as a result, Britain starts looking less attractive for investors.’

A Government source said: ‘Whatever they agree, Rishi will be the one fronting it. He knows he will be the one telling people he has to raise taxes and Tory MPs will absolutely hate him.’

A No 10 source said: ‘A plan for social care will be published before the end of the year.’

A Treasury spokesman said: ‘We are committed to bringing forward a long-term plan to reform the social care system and we will set out proposals in due course.’

He told Saj: Back me against Sunak and the job’s yours

Mr Javid had fallen victim to a political assassination in February 2020 by Dominic Cummings, who at the time was still unchallenged as Boris Johnson’s pugilistic No 10 adviser.

Mr Javid had lost a Whitehall guerrilla war with Mr Cummings after the adviser demanded that he sack his Treasury aides and subsume his operation into No 10’s – a move that was designed to leave Mr Javid with no option but to quit.

Now, ironically, he is part of a pincer movement to make Rishi Sunak – his successor and potential future leadership rival – bend to the will of No 10 over how to meet the exorbitant costs of the Covid crisis and social care.

Javid watched and waited as Sunak masterminded the economic response to the pandemic, while Cummings discredited himself with his ‘eye-testing’ Covid road trip to County Durham.

Mr Javid retained a foot in the Government’s inner circle via Mrs Johnson, who used to work for Mr Javid, along with backdoor contacts he had maintained with his old officials at the Treasury.

He would also bombard No 10 aides with offers to go on to the airwaves to defend the Government during the many crises that erupted during his sojourn on the backbenches.

It meant that, once Cummings had been ousted in a power struggle with Mrs Johnson in November, Javid featured prominently in Cabinet reshuffle speculation.

If Matt Hancock had not resigned, Javid had been expected to replace Gavin Williamson as Education Secretary. 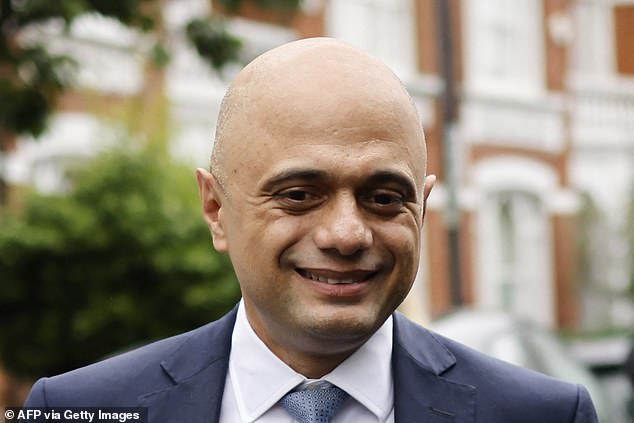 Mr Javid is the perfect tag-team partner for Mr Johnson: a former Chancellor who had been grappling the issue of social care from within the Treasury as recently as last year, and who had researched the issue at length during his time out of the Cabinet

But Mr Hancock’s spectacular implosion over the ‘gropegate’ scandal presented Mr Johnson with an opportunity: Mr Javid was installed as Mr Hancock’s replacement within 90 minutes of his resignation being announced – but only, according to sources, after Mr Javid had agreed to help the Prime Minister to put the thumbscrews on Mr Sunak over the need for a multi-billion-pound health tax.

Mr Javid is the perfect tag-team partner for Mr Johnson: a former Chancellor who had been grappling the issue of social care from within the Treasury as recently as last year, and who had researched the issue at length during his time out of the Cabinet.

For all No 10’s talk about being ‘in lockstep’ with No 11 during the pandemic, the traditional tensions between Downing Street and the Treasury have started to rise over the costs of the pandemic – as have assumptions that Mr Sunak is Mr Johnson’s heir apparent.

For Mr Johnson, Mr Javid represents a useful counterweight against the institutional might of the Treasury and the electoral charisma of Mr Sunak.

Even before he accepted the job, Mr Javid had told colleagues that increased spending will be needed for social care and the NHS for years to come, and noted that the gap between the Government’s day-to-day spending and revenue has ballooned since he left the Treasury.

Mr Javid also spent his time in the semi-wilderness researching several different countries’ approaches to tackling the pandemic for the Harvard Kennedy School of government.

His allies say that Mr Javid has even raised the prospect of using ‘wealth taxes’ on properties, higher business rates or other assets to pay the bills – a move that is usually anathema to traditional Conservatives – in addition to new internet and environmental taxes, despite being hemmed in by the ‘tax lock’ in the Tory manifesto, pledging not to raise VAT, income tax or National Insurance.

An ally of Mr Javid said: ‘Saj is aware that the rich have suffered much less during the pandemic, and that it has been a great unequaliser: their asset prices have risen, so it makes sense to raise the money there.

He wouldn’t necessarily even rule out a “windfall tax” on people who had done well in the pandemic.’

A Government source said: ‘Sajid kept up his sources in the Treasury – basically Rishi’s current officials – and has kept a close eye on the public finances. He would also hold informal talks with Rishi.

‘He has been pretty close to No 10 over the year, and the contacts stepped up when Cummings left.

‘He had also earned himself credit through the dignified nature of his departure and his refusal to hit back when Cummings attacked him.’

By way of contrast, Mr Sunak has been discomfited by praise heaped on him in recent months by Mr Cummings for his stewardship of the economy, giving the – false – impression that the Chancellor is an ally and admirer of the former adviser.

An MP close to Mr Javid said: ‘Saj is acutely aware that even the suggestion of taxing assets will infuriate parts of the Tory Party and that the next big political tension will be over the concept of “who pays” – with a phalanx of Northern MPs trying to tax the Southern MPs to death and fierce opposition from the shires.’

The MP added: ‘Tax rises would be incredibly difficult, but you could probably get people to back one for social care – a hypothecated health tax – if it was sold to them in the right way.’