The wheels are real – cast-offs from an original Spitfire. So is the fully functional Perspex canopy.

The old black dials in the cockpit are genuine too, straight out of brown boxes stamped Air Ministry, having been wrapped in their wax-paper packaging since 1944. But the rest of this rivet-perfect life-size replica? Not so much.

The electrical transformer at the back of the cockpit is a Heinz beans tin. The ‘blowdown bottle’, which would shoot compressed air into the undercarriage if the hydraulics were sticky, is an old aerosol. The joystick is made of wood and electrical wire – a real one would be £4,500 but this cost £7.50. 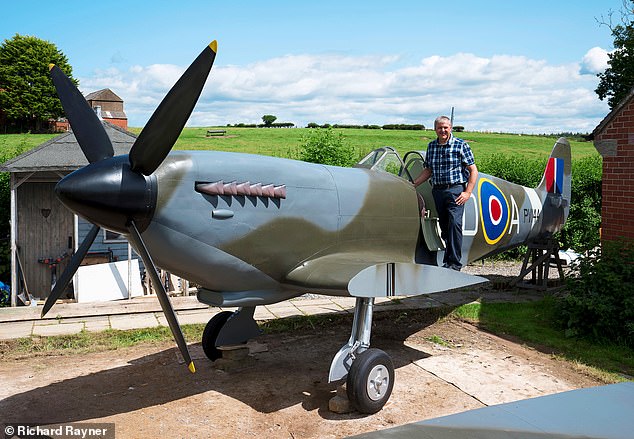 David Price from Carlisle, Cumbria has built a full-size replica of a Spitfire in his back garden 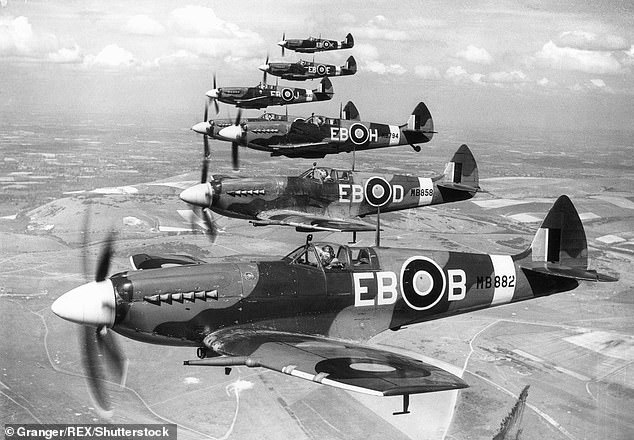 Best of all, there’s a milk-bottle top standing in for the cap on the radiator coolant tank with the words ‘Keep refrigerated after opening’ ever so faintly visible through the black paint.

David Price has spent 3,000 hours of labour on this extraordinary home-made Spitfire, built with materials sourced from local DIY shops, his garage, and the kitchen of his home near Carlisle, Cumbria. Sitting in the unlikely surroundings of his own back garden, his unique tribute to The Few was finally unveiled on Friday.

The cabling in the cockpit is the kind of wire you stick into the back of your TV. David’s friend Richard, who has a 3-D printer, knocked up the aerial and a carburettor cover. The undercarriage doors are held on with downpipe brackets. ‘They’re German,’ confesses David, 58. ‘Ironic, eh?’

Yet the outcome of this gloriously eccentric back-garden project is a full-size model that is sharper and more detailed than those used in Hollywood blockbusters, such as Dunkirk, or which mark the entrance to RAF bases. They come with a £50,000 price tag and are factory-moulded by specialist manufacturers. David’s budget was £8,000 and he’s done it in a space so small he’s going to have to demolish his shed to make room to mount the wings. (David’s wife Trish, 57, who manages Meals on Wheels in North Cumbria, has been using them as garden tables during lockdown.)

So what compelled him to build a replica Spitfire? ‘It’s a bit like asking someone why they’ve climbed Everest. It’s because I could… I started with the wingtips and thought I’d see how they went. Then I built one wing. It took me a whole year and that, I’m afraid, was a road of no return. I picked the Spitfire because I’ve loved them since I was a boy and they’re an iconic part of British history. Also, I wanted something popular, instantly recognisable. When I finished I didn’t want anyone saying: “Yes David, but what is it?” ’

There’s no chance of that for his back-garden Spitfire looks arrestingly perfect, as though it ought to be at the end of a runway waiting for a scramble, not hemmed in by a hedge ready to be craned out. That’s probably because David has the ideal credentials for the project. He is a builder but closed his construction company in 2018 to focus on his burgeoning career as a military historian. His book The Crew, the story of a Lancaster bomber crew, was a bestseller last year, and another about the Mosquito fighter-bomber will be published this autumn.

He is also a gloriously British eccentric. He plays the cornet, the trumpet, the guitar, the mandolin, the banjo and the harmonica, and is an accomplished landscape painter. He once bought the front half of a de Havilland Comet jetliner and kept that in his garden too. But the Spitfire was ambitious, even for him. ‘I needed something to do with my hands when I wasn’t writing,’ he says with some understatement. ‘It was March 2018 when I was at the Battle of Britain Memorial and thought, “Hmmm, I wonder?” After that it just got a bit out of control.’

He began by buying a book familiar to Spitfire obsessives that lists precisely every one of the plane’s dimensions. Then he chose a specific aircraft as his model – a Mark IX Spitfire, PV144, which went into RAF service in September 1944. It was flown by Battle of Britain and D-Day hero Squadron Leader James Hayter DFC, who commanded 74 Squadron and survived being shot down four times.

David’s next job was to erect the work tent which would cause him the lowest moment of the past three years. ‘The first winter there was a gale and I was out at 1am trying to stop it taking off into the night.’

Once he’d concreted in his tent pegs, he got to work on the plywood frame and its board and fibreglass covering, and eventually the exhausts, the propeller, and the fully fitted cockpit. He only saw the scale of his accomplishment on Friday when he finally took down the canopy. ‘I’ve done it one small piece at a time so when I took the tent off and saw the whole thing, I was as incredulous as anyone else.’

He’ll soon be putting his masterpiece up for sale and hopes to raise £25,000 to cover some of the cost of his time and the materials. Ideally he would like a benefactor to buy his Spitfire and keep it on display at the Solway Aviation Museum in Carlisle where he has volunteered since 1992. His next project is already under way – he’s bought a Ford Transit minibus that he will refit and paint in Lancaster bomber colours with a black body, a camouflage roof and an RAF roundel on the side.

‘David will die with his overalls on,’ says Trish. ‘He swears he won’t take on another massive project but he will. I know he’s planning something because he’s refusing to get rid of the tent.’