EXCLUSIVE: How a bizarre Medicare blooper means you may need THREE Covid jabs to be considered ‘fully vaccinated’ by the Aussie government – in ANOTHER rollout blunder

A flaw in Australia’s vaccine rollout is inadvertently pushing people to get three Covid shots – because they won’t otherwise be considered ‘fully vaccinated’ by the Australian government.

In the latest blunder to plague Australia’s vaccination program, Medicare is telling some Australians who have already been jabbed twice that they haven’t completed their immunisation course.

Northern Territory business owner Rick Mooney received his first AstraZeneca shot in April, but was accidentally given Pfizer as his second shot in June.

The 59-year-old called health officials, who told him he wouldn’t need another jab. But the government still refused to change his certificate to confirm he was fully vaccinated.

Mr Mooney then went out and received a second dose of Pfizer this week as ‘it was the only way I could find to get a vaccination certificate.’ 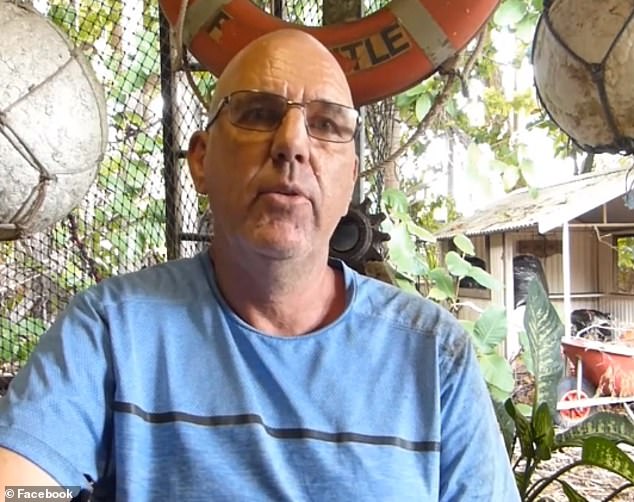 ‘My big issue is I really need to get that certificate resolved, because at some point in the future we might be required to present that for something,’ Mr Mooney told Daily Mail Australia.

The Arnhem Land man suggested that one day soon he may need to provide proof of vaccination for work or to travel to remote parts of the Territory which are vulnerable to Covid outbreaks.

‘I run a company – I just wanted that resolved,’ Mr Mooney said. The register only marked Mr Mooney fully vaccinated after he received his third dose of vaccine on Thursday.

His concerns are well-founded. Several European countries mandate citizens show they have been fully vaccinated or received a negative Covid test to access services.

In France, residents must show their Covid ‘green pass’ before entering cinemas, theatres, museums and theme parks. Denmark and some German states have the same rules for restaurants.

Sydney man Tom Lee, 34, received four doses of Pfizer and AstraZeneca because he wanted ‘to have as many antibodies against the coronavirus as I could’.

He is likely the country’s most vaccinated man. But at the beginning of June, Mr Lee’s immunisation statement likewise said that he had only been partially vaccinated.

At that point he had received one dose each of AstraZeneca and Pfizer. 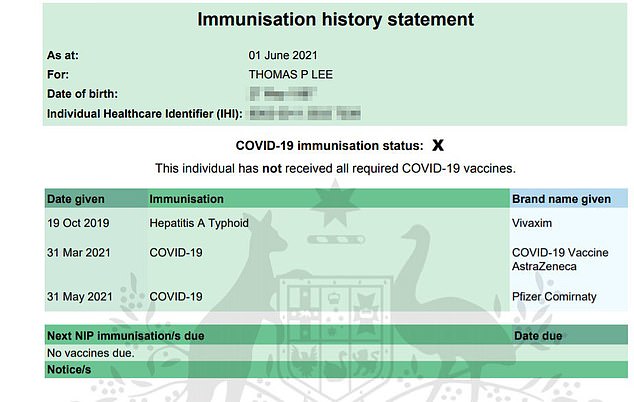 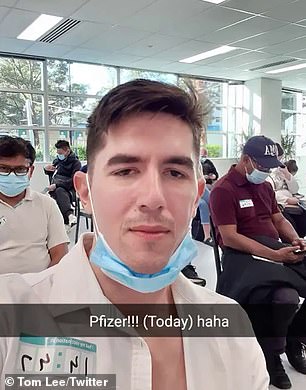 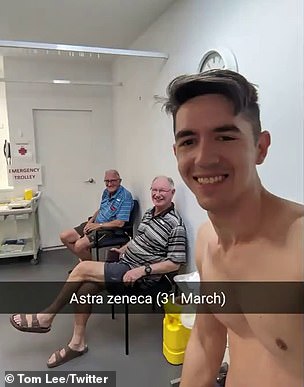 ‘The Vax register only recognises two of the same vaccine as triggering the ‘this individual is fully vaccinated message’,’ he said. ‘So I did need the third shot to get that box ticked.’

Services Australia, the government agency that runs both the Australian Immunisation Register and Medicare, said it was following the health advice that two shots of the one vaccine means a person is fully vaccinated.

‘The rules for the display of an individual’s COVID-19 vaccination status as recorded in the AIR reflect Department of Health policy advice,’ general manager Hank Jongen said in a statement.

‘The partial status reflects that the individual has not received two doses of the same vaccine.

‘After an individual has received two doses of the same vaccine within the required time … their COVID-19 immunisation status will change and display as ‘up to date’.

Experts have suggested Australians who have received AstraZeneca may be offered a booster shot of an mRNA vaccine, such as Pfizer, in the future.

How DID Sydney man Tom Lee, 34, get four Covid-19 vaccinations?

By Kevin Airs with Daniel Piotrowski 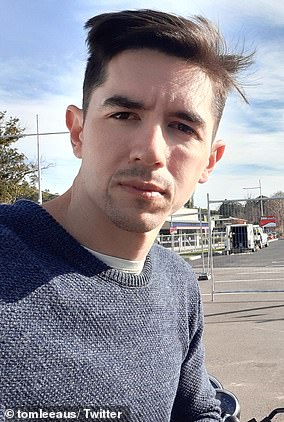 A young Sydneysider boldly got himself fully vaccinated against Covid with two different jabs, despite being just 34 and not working in any essential sector.

Tom Lee insists he’s not jumped the queue for his jabs and merely lined up to wait his turn at vaccine hubs to complete what he’s calling his ‘antibody maxxing’.

The Pfizer vaccine is only available to people over 40 in Australia during this stage of the rollout or those working in critical sectors such as hotel quarantine, while AstraZeneca is on offer for anyone who wants it.

But instead of waiting the predicted three months until younger Aussies are allowed the Pfizer jab, Mr Lee simply turned up at a vaccine centre at the end of a day and tried his luck.

Mr Lee said the doses would have gone in the bin if he hadn’t taken one – and has taken to taunting the super-infectious Delta variant on Twitter. ‘If the Delta variant wants to test its strength, it should come down to greater Sydney’.

‘They (NSW Health) run a very tight ship. They’re trying to vaccinate the entire population, and they’re not burdening themselves with unnecessary paperwork.’

In 2011, Mr Lee travelled to Libya to learn to become a war correspondent during the civil war there and boasted to the Sydney Morning Herald of seeing the corpse of slain despot Muammar Gaddafi.