Up to 60,000 people could die from the flu in England this winter in a worst-case scenario, medics warned today.

It is feared the nation will suffer one of the worst influenza outbreaks in decades due to Covid lockdowns causing a huge drop in immunity against other viruses.

And flu isn’t the only threat, according to the report by the Academy of Medical Sciences, which said the NHS could be crippled by a triple-whammy of Covid, flu and other seasonal viruses.

Modelling of how bad influenza could strike say the death toll could be twice as bad as normal, with flu typically kills between 10 to 30,000 people annually.

The AMS report, which was commissioned by England’s chief scientific adviser Sir Patrick Vallance, called for ministers to start treating flu like Covid, saying usual death tolls from the seasonal virus are unacceptable.

It means Boris Johnson — who has repeatedly pledged to follow the science — could face pressure to adopt draconian measures to tackle other viruses in the future.

In recent weeks, the PM has vowed to ‘learn to live’ with the coronavirus like the flu, which raised hopes that the end of lockdowns was finally in sight. 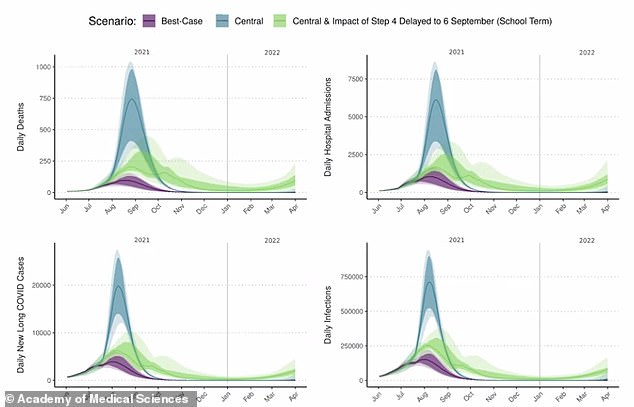 The graphs estimate daily Covid cases, hospital admissions, long-Covid cases and infections in England in winter. The purple line shows the best case scenario, the blue line is the reasonable worst case scenario and the green line shows what they think will happen if ‘Freedom Day’ was pushed to September 6. In all projections, the peak is projected to take place in August and subsequent waves take of next March, but the scientists said they could not rule out another winter wave. The experts predict that the peak in deaths will be much lower than last winter, but hospital admissions could rise to similar levels and those living with long-Covid could double in number

The graphs show the two different scenarios considered by the scientists. The first shows what they think could happen if people in England still have some immunity from the flu, but natural waning is happening which makes more people susceptible to catch the flu over time. In this situation, transmission would likely take off in winter and infections and deaths would double compared to previous years. In scenario two, the scientists estimated that if flu immunity dropped in the population, the epidemic would most likely take off this summer, and around 1.5 times more people would die and go to hospital. A summer outbreak is less severe, because the R number is lower at this time of year, so despite more people being susceptible to infection due to a lack of immunity, less people would catch it

Society has never shut down in the face of a flu crisis, although NHS hospitals have had to cancel tens of thousands of operations in the middle of influenza outbreaks.

The AMS report looked at the Covid and non-Covid health challenges facing the NHS this winter, what risks they pose and what can be done to mitigate them.

All remaining lockdown restrictions are due to be lifted in England on Monday, Wales will follow suit in August and Scotland and Northern Ireland are expected to relax their rules significantly in the coming weeks.

Ministers are prepared to tolerate over 100,000 cases per day and No10’s top experts believe there could be at least 1,000 to 2,000 daily hospital admissions.

The NHS waiting list already stands at a record 5.3million, with the pandemic and the disruption lockdowns have caused on non-Covid care having worsened the crisis.

New Health Secretary Sajid Javid has said this list could go to more than 13million by the end of the year.

Conclusions in the AMS report were made by a panel of 29 experts, ranging from virologists to immunologists and NHS doctors.

The report warned the NHS is already gearing up to face pressures from a third Covid wave, which could leave tens of thousands hospitalised.

Thousands fewer beds will be available in hospitals, with health bosses forced to comply with Covid social distancing restrictions.

Existing staff shortage crises will pile on further pressure, with 84,000 vacant roles throughout the health service, the report warned.

The NHS also faces the threat of an increase in heart attacks and strokes because the pandemic led to a decline in physical health.

On top of that, the threat of flu and respiratory syncytial virus (RSV) could pile even more stress on the NHS.

The experts warned deaths and hospitalisations from flu and RSV could double if there is a surge in infections driven by a drop in immunity caused by low infection levels last year.

The experts estimated that if people’s immunity against respiratory syncytial virus (RSV) has dropped, cases of the virus in children under five in England will double. If protection has not waned, the scientists estimated cases would jump by 50 per cent. The virus usually causes 20,000 under-5s to be admitted to hospital every year

Respiratory syncytial virus (known as RSV) causes an infection called Bronchiolitis. The infection is spread between people by coughing and sneezing.

* Wheezing sound when breathing out

* Trouble feeding (for babies, this is because they only breathe through their nose).

Symptoms are often worse at night. Illness usually starts to improve after two to three days.

Infection may be worse and last for longer in very young children (under three months), premature babies or children with lung or heart problems.

No medicine can be taken to cure bronchiolitis.

Children’s paracetamol (in recommended doses) may help your child feel more comfortable if they have a fever.

Infants with a severe infection may be admitted to hospital. In hospital, treatment may include oxygen and fluids. Fluids are usually given through a nasogastric tube (a tube that goes into the nose).

Make sure your child is getting enough fluids. Smaller feeds given more often may help.

Salt water solution available from pharmacies (e.g. Fess) dropped or sprayed in each nostril before feeding may help clear the nose.

Keep your child away from cigarette smoke.

Prevent the spread of infection by keeping your child away from other small children especially for the first few days of illness.

Cases of the common viruses plummeted to the lowest levels ever recorded in the UK last year, as measures to stop Covid infections had a knock-on effect.

RSV could be more than two times worse this year, with the virus usually causing 20,000 infected children under 5 to be admitted to hospital.

They also warned hospital admissions from Covid could hit up to six thousand per day.

But the experts warned their figures are estimates, as they do not know how many people are immune from the viruses.

The flu is also ‘incredibly unpredictable’, so it is very difficult to estimate how bad it will actually be.

Case numbers will also depend on any measures taken to mitigate infections, they said.

Covid and the other two respiratory illnesses have symptoms that mimic each other, so it is important to have tests that distinguish between them, the scientists said.

This could be done though multiplex testing, which is a single test that can identify up to 10 different viruses.

One of these could be developed to test for Covid, flu and RSV at the same time, so the best treatment and advice can be provided, the experts said.

Quick detection of flu cases would let doctors treat the flu with antivirals — which work best if given within the first 48 hours of catching it.

But experts said it is unclear whether these would be rolled out in England because they are expensive and it would be ‘an effort’ to spread them out.

The group advised people to continue with behaviours they picked up during the pandemic to protect against other respiratory disease.

Professor Sir Stephen Holgate, chair of the advisory group, said: ‘Is it acceptable at the present time looking backwards to have all these viruses swashing around at winter driving the NHS to breaking point? No.

‘We need to respect our lungs now. We deserve to have a change in how we operate as a society to control these viruses.’

‘All the things we do for Covid – like staying away from people when sick – we need to do when dealing with any viral infection, because you can pass it on,’ she said.

Everyone in the UK ‘thought it was all very strange’ when countries that experienced SARS outbreaks kept wearing masks, but now everyone has learned about how viruses are transmitted and have adopted habits like washing their hands more, Dame Johnson said.

She added that said she hopes the country will take forward some of these behavioural changes, but can’t predict if that will happen.

In addition to the risk from Covid, flu and RSV, the academy warned NHS also has to prepare for a Covid booster programme, a major flu jab rollout and catch up missed routine vaccinations.

The health service also has to improve infection prevention control and surveillance because up to 10 per cent of all patients admitted to hospital caught the virus while they were there.