Anti-vax protesters including Jeremy Corbyn’s brother, Piers, gathered outside the court where a Covid denier who claimed the pandemic was a ‘massive scam’ is standing trial.

Around 200 gathered outside Cheltenham Magistrates Court in Cirencester, Gloucestershire, where anti-lockdown protester Debbie Hicks, 46, is standing trial after being charged with a public order offence.

Ms Hicks was arrested last December after she wandered around Gloucester Royal Hospital and claimed it was ‘shut down’ and ‘dead’.

In the eight-minute film, which was viewed by 158,000 people on Facebook, she said: ‘We’ve been put in Tier 3, for this? It’s a disgrace. I’ve seen less than 20 people. It’s completely dead in an empty hospital with wards shut down and the lights off. 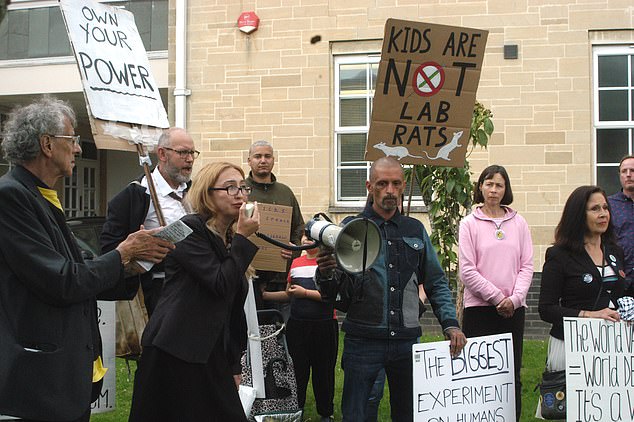 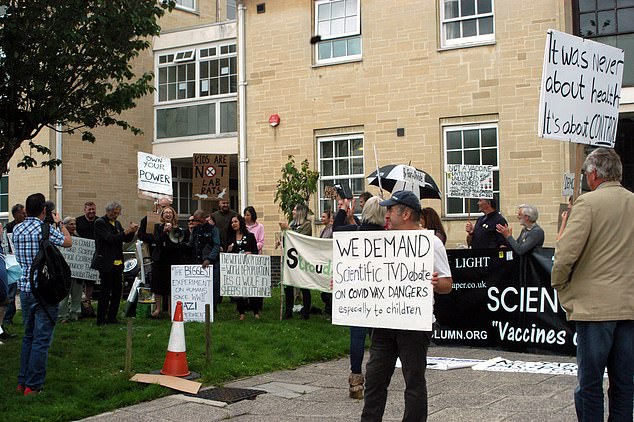 Crowds of supporters arrived outside the court with an array of posters emblazoned with the words ‘Kids are not lab rats and ‘We demand scientific TV debate on Covid vax dangers, especially to children’

Member of the Public ( Debbie Hicks ) handcuffed & took to police station for . ONLY . filming empty hospital that belongs to the Public . CLICK . pic.twitter.com/9hU1XrMAy9

‘Where are all the people dying and where is the mutant virus? I can’t see the evidence and neither can the public watching. We’ve been robbed of Christmas for this’.

The clip was filmed on December 28 – shortly after the area was moved to Tier 3 on Boxing Day.

The anti-lockdown protester was then arrested in her dressing gown by two officers who visited her home in Stroud, Gloucestershire, 24 hours later.

Earlier today, crowds of supporters, including the former Labour leader’s brother, Piers Corbyn, arrived outside the court with an array of posters emblazoned with the words ‘Kids are not lab rats’ and ‘We demand scientific TV debate on Covid vax dangers, especially to children’.

Last year Gloucester Royal Hospital hit back at Ms Hicks and insisted the wards were ‘extremely busy’ and accused her of ‘intrusion’ and upsetting patients filmed waiting in A&E.

NHS chiefs claimed there were more than 200 Covid patients in the hospital while Ms Hicks was filming.

One doctor told MailOnline she had filmed a deserted outpatient area on a bank holiday Monday, hence why it was empty.

Gloucestershire Police said Ms Hicks was arrested under Section 4A of the Public Order Act – meaning she is accused of causing intentional harassment, alarm or distress to people while filming the hospital.

A spokesman said: ‘Following a number of reports in relation to a video filmed by a member of the public at Gloucestershire Royal Hospital and posted online, officers arrested a 46-year-old woman on suspicion of a public order offence. 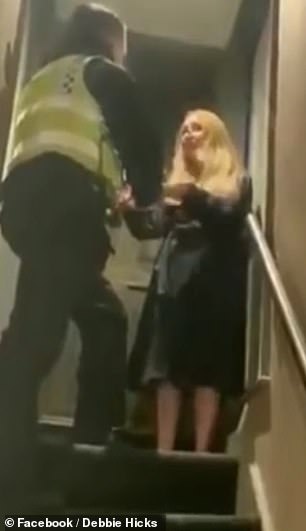 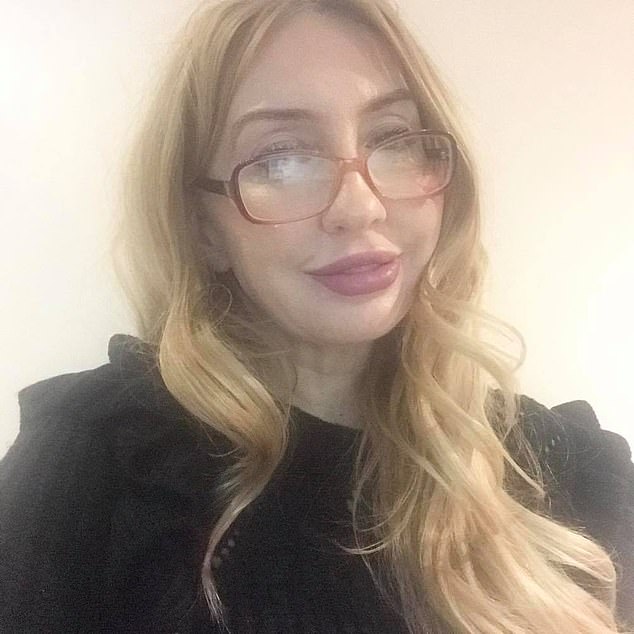 In the video shared widely on social media the activist said: ‘Where are all the people dying and where is the mutant virus?’

‘The woman has been bailed to return to police on January 21, with conditions that she cannot enter any NHS premises or the grounds of any such premises, unless in the case of an emergency or to attend a pre-arranged NHS appointment.’

Meanwhile a hospital spokesman added: ‘Our hospitals are and remain extremely busy and colleagues at both our hospitals have been working hard throughout the festive period to care for our patients

‘Contrary to what you may have seen through ‘secret filming’ on Facebook, our hospitals are and remain extremely busy.

‘We are currently caring for more than 200 patients with COVID-19, including many who require treatment in our critical care departments and a further 500+ non-COVID patients.

‘Filming patients who are waiting in A&E without their consent is both intrusive and upsetting as maintaining patient confidentiality is key to our hospitals being a safe space for you to receive the care you need. 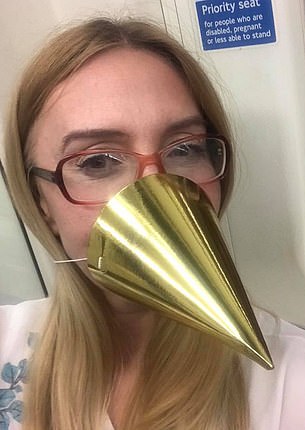 ‘Our Trust and our colleagues throughout the NHS are dedicated to caring for you around the clock, every day of the year.

‘We know that the vast majority of our local community in Gloucestershire appreciates the extraordinary dedication and expertise of our NHS and we’re extremely grateful to you all for your continued support.’

And local Tory MP Siobham Baillie said: ‘It’s appalling that our Gloucestershire Hospital Trust had to spend their precious time during this difficult pandemic defending themselves against films on social media that were wrongly claiming the hospital is empty.’

Under UK law, the public is not allowed to film inside a hospital – or patients – without prior permission being granted.

However during her filming, Ms Hicks journeyed through A&E, along corridors and looked into various wards without a mask, telling people who stopped her that she was exempt from wearing them.

In one angry exchange she was heard exclaiming: ‘You shouldn’t be asking me about that. It’s none of your business. Two stupid women asking why I’m not wearing a face covering. I’m not in the mood for this bulls**t today’.

The activist was later arrested at her home on December 29 on suspicion of a public order offence where her husband filmed two officers trying to handcuff her in her dressing gown.

Sharing the video after being bailed – and being banned from all NHS property – she said: ‘Wake up world- how utterly Orwellian and Nazi to go through this for sharing a video of an empty hospital.

‘This officer barged into my home, at xmas, and arrested me when I wasn’t dressed in front of my family.

‘I was in my nightgown with nothing underneath when the thug of an officer tried to drag me off under arrest as he aggressively arrested me and twisted my hands behind my back in handcuffs’. 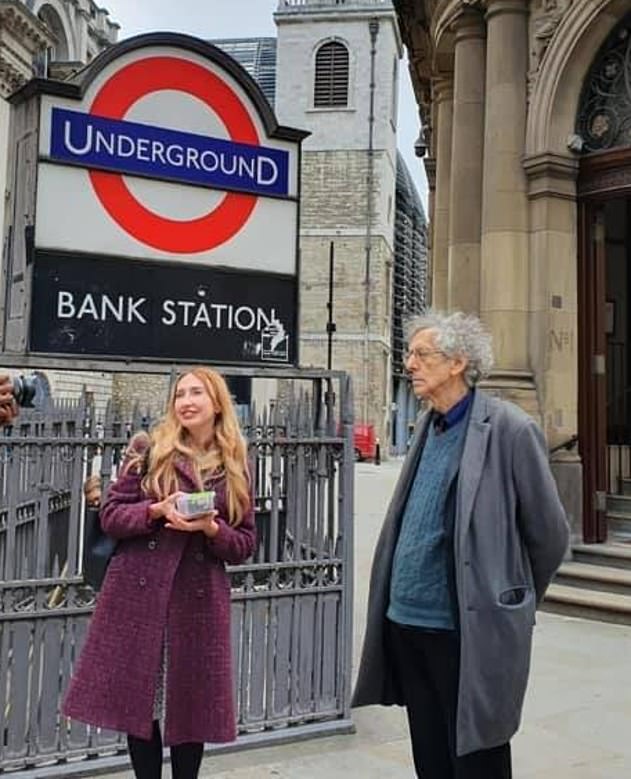 Ms Hicks is a former Labour council candidate and supporter of Jeremy Corbyn’s brother Piers (pictured together this year), who is an anti-lockdown campaigner

Ms Hicks stood for Labour at the 2017 local elections before being suspended after suggesting that the Manchester terror attack was ‘wonderful timing for Theresa May’ – suggesting the terror attack that claimed 23 lives and injured 800-plus could help win the Tories votes.

She is an active supporter of Piers Corbyn and his ‘Freedom Rally’ movement, attending protests in London with him and posing for a selfie on the Tube using a party hat as a mask.

Following her arrest Mr Corbyn tweeted the video of her being taken by officers along with the caption: ‘Fascism’.