Scott Morrison has supported locking down Sydney until new local Covid cases are eliminated amid reports some cabinet ministers want to let the virus spread.

The shut down is due to end on July 16 but Premier Gladys Berejiklian has left the door open for another extension to snuff out the highly infectious Delta strain.

Asked if he backed the New South Wales government’s plan to get cases down to zero, Mr Morrison said: ‘If that’s what’s needed in this suppression phase and if that’s what state government does, then, of course.’ 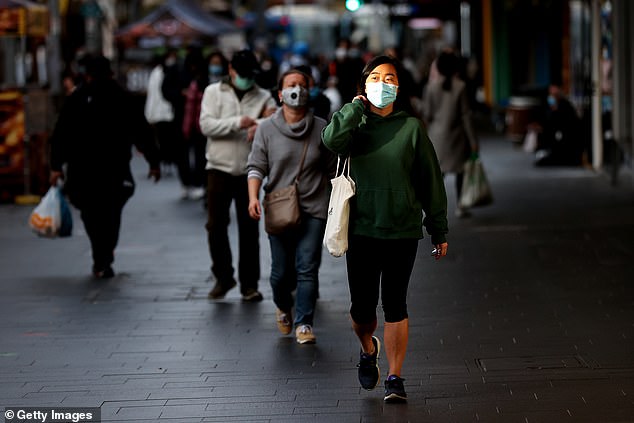 NSW recorded 38 cases on Thursday, the state’s highest number of daily infections since the first wave of the pandemic last year (pictured, shoppers in Sydney’s Chatswood on Thursday)

Last night the Sydney Morning Herald reported that state cabinet was divided over whether to continue lockdown or lift it and let the virus spread.

Three senior ministers told the publication the state was at a ‘fork in the road’ and the next three days ‘would be critical.’

NSW Health Minister Brad Hazzard on Wednesday said ­if lockdown fails then the state must ‘accept that the virus has a life which will continue in the community’.

But he backtracked on Thursday, saying opening up depends on vaccination rates. 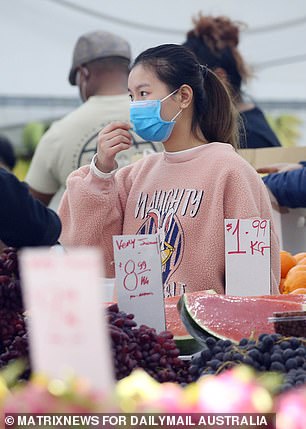 The Prime Minster said he is not aware of any state ministers who want to abandon lockdown and let the virus rip through the community.

‘At the discussions I’ve had with NSW cabinet ministers, that hasn’t been relayed to me. So I don’t know what these reports relate to,’ he said.

Mr Morrison said his federal health experts are advising him that it is too dangerous to live with the highly infectious Delta strain and lockdown is necessary.

He revealed he expects the state to continue its suppression strategy, saying: ‘I believe that’s what will happen in NSW.’

Reports have emerged in recent days that Treasurer Dominic Perrottett opposed lockdown because of the damage it does to the economy.

Mr Morrison said he should ‘come into line with the premier.’

On Thursday the state’s chief health official warned lockdown could be extended yet again after the outbreak that began in the city’s eastern suburbs last month spread to the south-west, where the number of unlinked cases has soared.

NSW recorded 38 cases on Thursday, the state’s highest number of daily infections since the first wave of the pandemic last year.

Police patrols were ramped up in Sydney’s south-west on Friday morning to ‘ensure compliance’ with lockdown restrictions, with shoppers warned they may be stopped and questioned over whether what they’re buying is ‘essential’. 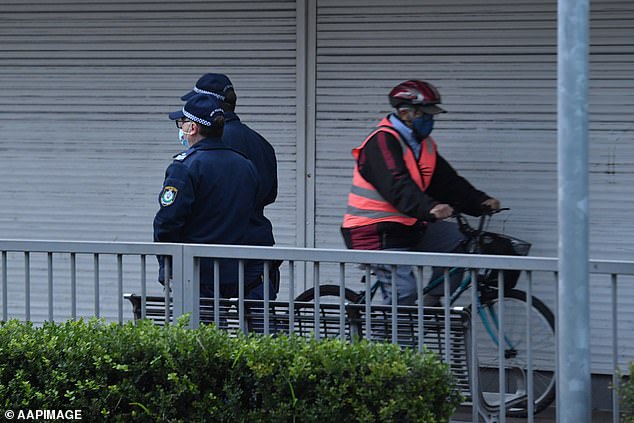 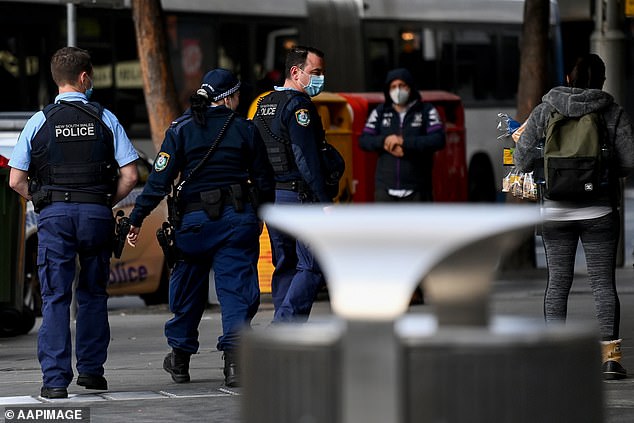 Police will ramp up their patrols of Sydney’s south-west from Friday, with 100 extra officers stationed in the suburbs (pictured, police patrolling Sydney on Thursday)

The singling out of Liverpool, Fairfield and Canterbury-Bankstown residents and restricting of their movements has outraged community leaders, who have questioned why their wealthy eastern suburbs counterparts haven’t endured the same police enforcements.

‘We are finding more unlinked cases now, where as early on it was very linked,’ she told the Daily Telegraph.

Dr Chant said the drive towards zero community transmission will continue as the vaccine rollout finally begins to ramp up, signalling an extension of lockdown, but that attitudes towards the spread could change when enough people were vaccinated.

‘It is hard with (the current) level of vaccine coverage not to see a significant escalation in cases,’ she said.

‘I’m also very conscious that vaccine will be available in the near future in sufficient quantities to protect us and (we can then) have a different conversation about community transmission at that time.’

Dr Chant and other officials spent Thursday night amending the public health order to make it illegal for more than one person to visit another household to provide ‘care or assistance’. 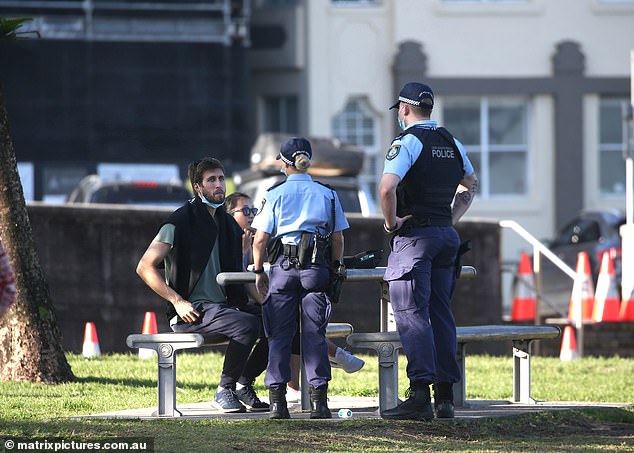 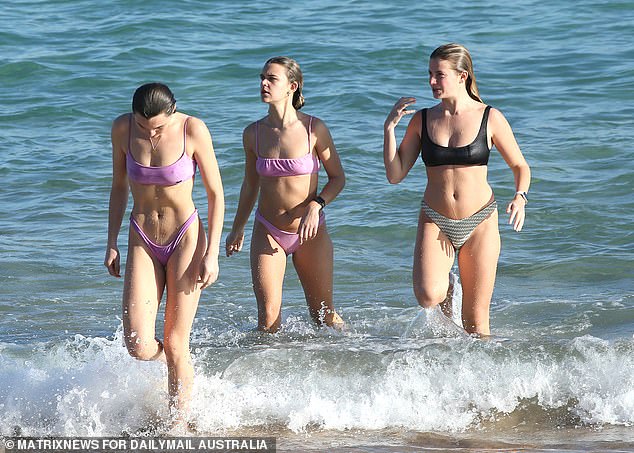 While Sydney’s south-west will endure a heightened police presence in lockdown, those in the east have been seen packing beaches and parks (pictured, women swimming at Bondi Beach last weekend)

More than half of Thursday’s new 38 cases were from Sydney’s south-west.

The Liverpool, Fairfield and Canterbury-Bankstown local government areas take in 110 suburbs, and is home to more than 820,000 residents and represents a 519 square kilometre swathe of the city.

NSW Premier Gladys Berejiklian attributed the spike in cases in the region to non-compliance in the community and illegal household interactions, prompting a police crackdown on residents leaving their homes.

But Fairfield Mayor Frank Carbone and Canterbury-Bankstown counterpart Khal Asfour have jumped to defend their residents and pointed the blame at hotel quarantine leaks and the bungled vaccine roll-out for the spike in cases.

‘Don’t put this on south-west Sydney, I’m not going to cop this,’ Mr Carbone told Nine News on Thursday.

‘It’s not our fault the virus is here. It’s the fact that it keeps on leaking from hotel quarantine, and that’s where people are frustrated.’

He later told Sky News: ‘I just think we’ve got to work out a way to stop the virus coming in from hotel quarantine, it’s a controlled area, that’s where everyone’s frustrated.

‘Fairfield’s a perfect example, an area that never had the virus, but the virus spreads.

‘You need to contain it from its entry point, they need to put as much resources as possible to stop the virus coming in to play from the beginning.

‘We had a nurse come from the inner-west and eastern suburbs come to Fairfield Hospital and contaminate one of our wards.

‘We also had the West Hoxton cluster which came from the inner-city. That wasn’t locked down or controlled and that spread across south-west Sydney.’ 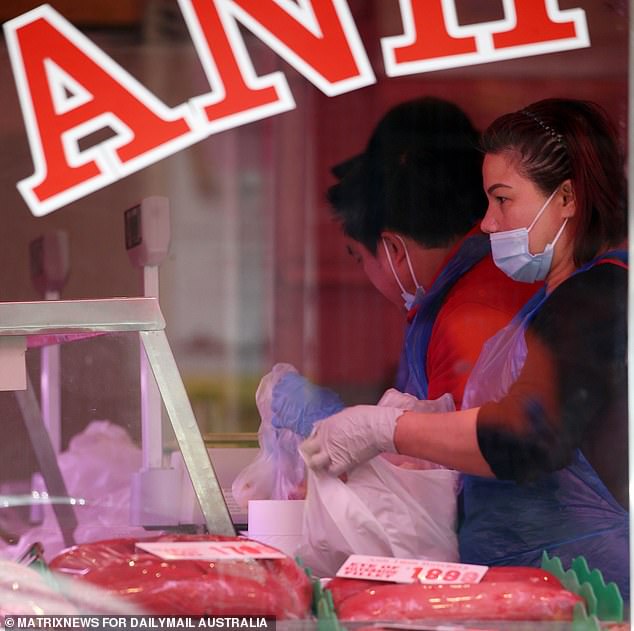 There are grave concerns for the rise of the number of unlinked cases in Sydney’s south-west (pictured, a butcher’s shop in Bankstown) 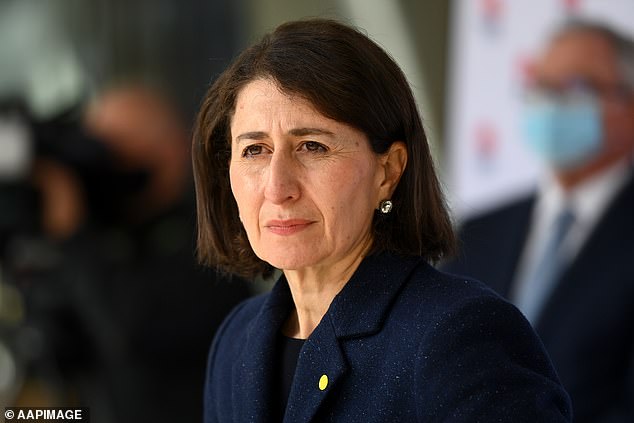 But Mr Carbone’s deputy Paul Azzo believes the crackdown will be a small price to pay if it can help slow down the spread of the virus.

‘The fact that the proposed response was not adopted for earlier outbreaks in eastern Sydney and the northern beaches does not faze me,’ Mr Azzo said.

‘I see the proposed police response as a positive for South Western Sydney and I congratulate the premier for taking a special interest in the residents of Fairfield.’

Canterbury-Bankstown mayor Khal Asfour claims he wasn’t consulted about the increased police patrols which he says have cause widespread disgruntlement and disillusionment in the community.

‘The government and Premier came out targeting our communities when I don’t think there was no need to,’ he told ABC’s RN Drive.

‘This is a Sydney wide problem, this isn’t a south-west Sydney problem.

‘The virus didn’t emanate here, it started in the eastern suburbs.’

He has no problems with police fining people not wearing mask and leaving their homes for non-essential reasons. 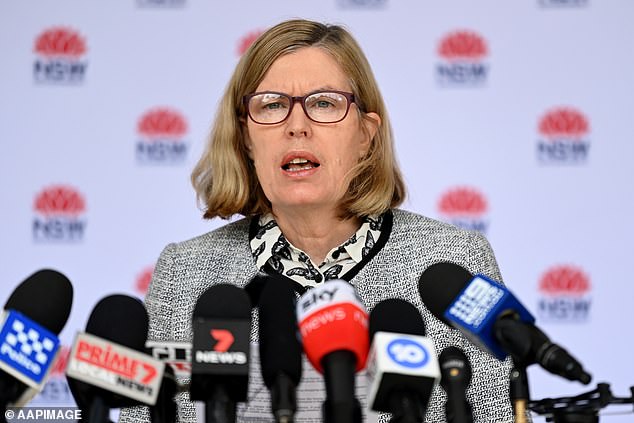 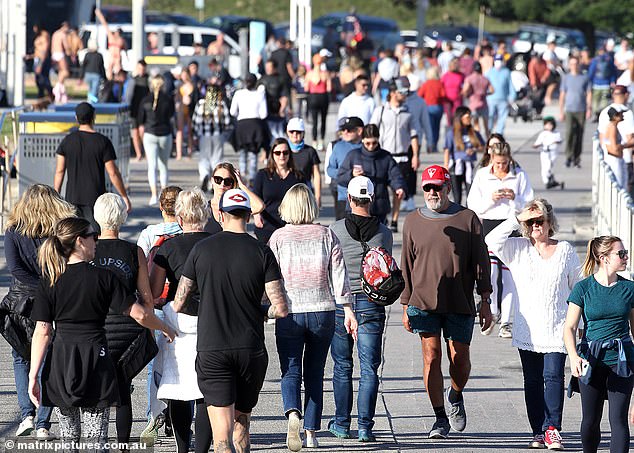 Eastern suburbs residents flocked to Bondi last weekend to soak up the winter sun. Their counterparts in the city’s south-west won’t enjoy the same freedoms this weekend

But he questioned why 100 additional officers have been deployed to the region when they weren’t brought in to Bondi when the outbreak began, where Sydneysiders have flocked to beaches and parks to soak up the winter sunshine.

‘I have to question and wonder why why this didn’t happen in Bondi when the outbreak started a few weeks ago,’ Mr Asfour said.

He called on the NSW government to get its messaging to the community right.

‘We shouldn’t be blamed for this. I think the vaccine rollout and hotel quarantine are the reasons why this variant has spread across Sydney,’ he told The Project.

‘We’ve had this pandemic on our shores for 18 months. I think the messaging is right, and they’ve got the material.

‘I think they’ve just had a bit of a problem in getting it out there to the right people.

‘We’re a very faith-based community out here and it’s very hard for people to hear these messages from their faith-based leaders and I think it’s important that when that’s occurring that the government needs to double down on their efforts and make sure that people are getting the right message.’ 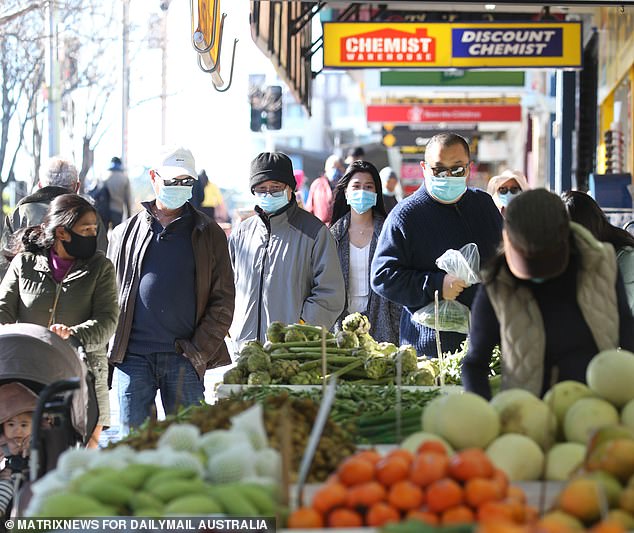 Residents out and about in Sydney’s south-west will be grilled by police as to why they’re leaving their homes (pictured, Bankstown locals stocking up on essentials)

Racial justice organisation Democracy in Colour went one step further, describing the police operation as ‘thinly veiled racism’ and called for it to be reversed.

‘Inner city suburbs and the Northern Beaches have had significant cases but they have not been harshly policed like this.’

Ms Berejiklian has defended her comments singling out the Fairfield, Canterbury-Bankstown and Liverpool regions.

‘We are here to make sure people know what the risk is … it is really important for me to say it like it is,’ she said on Thursday.

‘Please note that when I say it like it is I don’t mean to cause offence, I just need to get the information out.

‘If we don’t say it like it is, people won’t think about their own actions and behaviours and I think the people of this state would expect me to be honest and direct as specially at a time like this.’

‘They need a reasonable excuse to be out there, and people need to ask themselves the question ‘do I need to do it?’ and quite often, the answer can be no,’ he said. 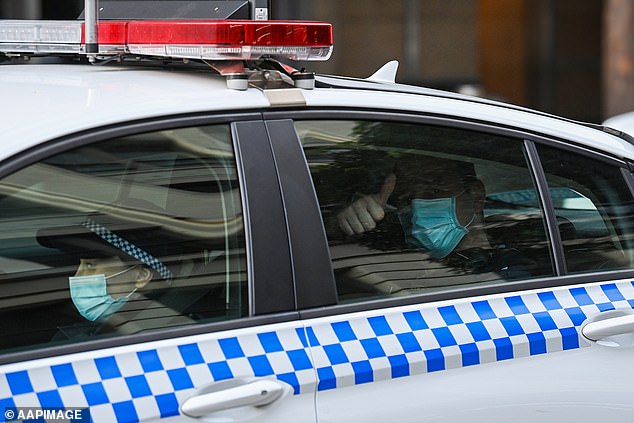 More than 100 officers have been deployed in Sydney’s south-west to ‘ensure compliance’ with lockdown restrictions (pictured, police in the city on Thursday)

SYDNEY’S LOCKDOWN: WHAT YOU NEED TO KNOW UNTIL JULY 16

Those living in Greater Sydney, the Blue Mountains, Central Coast, Shellharbour and Wollongong must abide by the following:

Masks are mandatory in all indoor settings outside the home, including offices

There is no curfew but a stay at home order applies, with only four reasons to leave your home

Schools are closed with at-home learning in place, but no child will be turned away if they need to attend in person

*The four reasons you can leave your home:

The rest of NSW (including regional areas) is subject to the following restrictions:

When does the lockdown end?