An Australian couple who just moved into a new house woke up to find two uninvited guests making themselves at home on their balcony.

Prue Jezierski and her partner relocated to Howard Springs near Darwin and were camped out on the floor in swags when they woke up to a noise outside.

Ms Jezierski was able to pull out her phone and capture the moment two large snakes were fighting just metres from where they were sleeping.

‘What a welcome party,’ she captioned the video.

“What a welcome party.” 😳🐍 Prue and her partner have just moved into their new house in Howard Springs. They have no…

The previous owner told them one of the snakes had lived at the house for years and was named Basil.

The video has been viewed by more than 58,000 people since being uploaded on Thursday with many questioning whether they were fighting or mating.

‘Are they playing, fighting or … the other,’ one person said.

‘Does Basil have a Belle,’ added another.

‘No way, could not handle that. I saw a green and yellow snake in the garden in and I couldn’t go outside for months,’ a third adeded.

‘My snake catcher mate told me that half the houses in Darwin and the rural area have a python living in the roof. If you don’t hear rats or possums then you probably do,’ a fourth added. 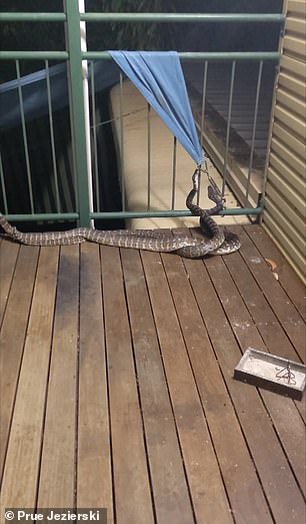 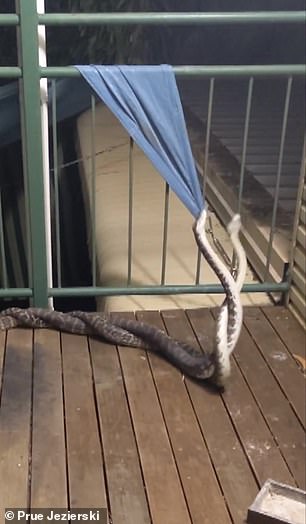