Exclusive: Blow to the high street as just a THIRD of staff say they will return to their workplace full-time after work from home rules are axed on July 19 – and almost a FIFTH say they won’t return at all

City centre retailers were handed a recovery blow today as a new poll revealed workers are set to shun a full-time return to offices and factories.

An exclusive poll for MailOnline shows that just a third of staff are planning to return to their workplace full-time after July 19 Freedom Day.

And almost a fifth (18 per cent) of those surveyed by Redfield and Wilton Strategies said they would not be going back at all.

More than four-in 10 said they would be only returning part-time once the long-running guidance to stay away because of the pandemic officially lapses.

The findings will cause alarm for businesses relying on the return of commuters for their trade. But they may provide a boost for those in smaller commuter towns who could see an upturn in business.

It comes as Rishi Sunak urges Britons to get back to the workplace when coronavirus restrictions lift – emphasising its importance for young staff. 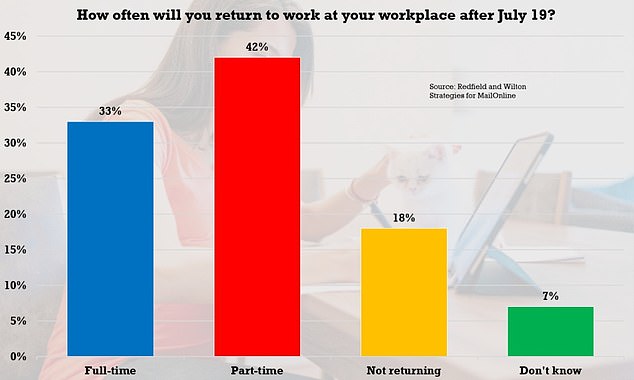 An exclusive poll for MailOnline shows that just a third of staff are planning to return to their workplace full-time after July 19 Freedom Day. 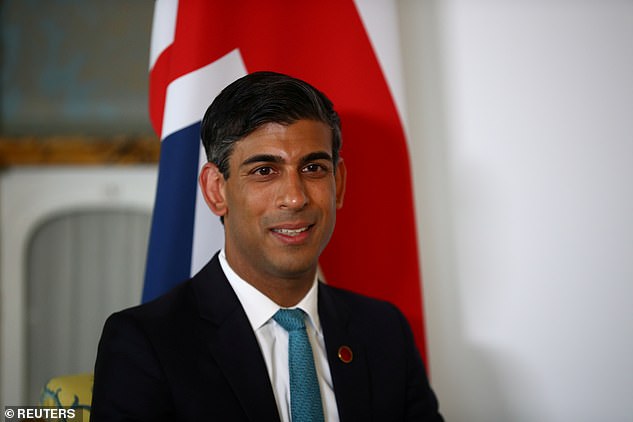 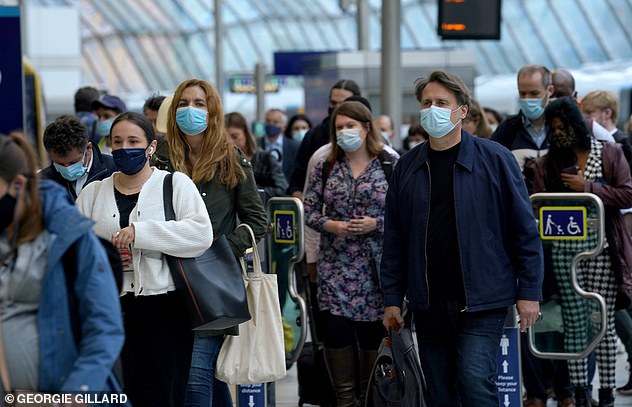 Mr Sunak insisted that there was a benefit to workers from being with their colleagues (pictured: A morning commute in Waterloo, London)

The order to work from home is expected to be scrapped on July 19 in England, but unions have raised concerns about the lack of guidance for employees to safely return to the workplace.

There have been widespread concerns about the economic impact of people staying at home, with town centre businesses such as cafes suffering from the lack of trade as workers have been kept away from their offices.

But Chancellor Mr Sunak said he looked forward to the shift back to offices.

He told the Daily Telegraph: ‘I think for young people, especially, that ability to be in your office, be in your workplace and learn from others more directly, is something that’s really important and I look forward to us slowly getting back to that.’

Mr Sunak insisted that there was a benefit to workers being with their colleagues.

He said that apprentices at a car mechanic training centre he met in Wolverhampton were ‘super-excited to be back in their workplace’.

‘They were over the moon, because they’ve spent six months trying to learn on Zoom and Teams and everything else, and it hasn’t been great,’ he said.

‘They were saying actually being in, and most importantly, getting the support from their mentors, has been really valuable to them.’

At Step 4 of England’s road map, the guidance to work from home where possible will end, to allow employers to start planning a safe return to workplaces.

Mr Sunak said it was not for ministers to tell firms what they should or should not do, adding: ‘Ultimately I trust people and businesses to make decisions for themselves.’

The Trades Union Congress has written to ministers to raise concerns about the lack of consultation on plans which will affect millions of workers.

TUC general secretary Frances O’Grady said: ‘We all want working life to get back to business as usual.

‘But as restrictions are lifted and increasing numbers return to their workplaces, it is crucial that we get workplace safety right, and give workers and members of the public confidence.’

She said the TUC has ‘real fears that clear, detailed guidance for employers will be replaced by vague exhortations to employers to do the right thing, resulting in confusion’.

Ms O’Grady warned that without detailed plans the country could be ‘hobbled by rising infections and enforced self-isolation’ keeping workers out of action.