At least 160,000 hip and knee replacement operations have been delayed because of Covid, researchers say.

Bristol University academics fear it may take the NHS more than 10 years to clear the coronavirus-fuelled backlog.

In order to get a grip on the crisis, they say special operating centres running seven days a week are needed. Health chiefs should also consider asking retired surgeons to help.

Charities say patients have been left in agony from the delays, with scores ranking their pain to feel ‘worse than death’.

NHS hospitals were forced to cancel tens of thousands of routine operations during the first and second waves of the Covid pandemic. The controversial move affected patients waiting for elective surgery and even cancer operations.

The new study lays bare the impact the coronavirus had on the most common NHS procedure. 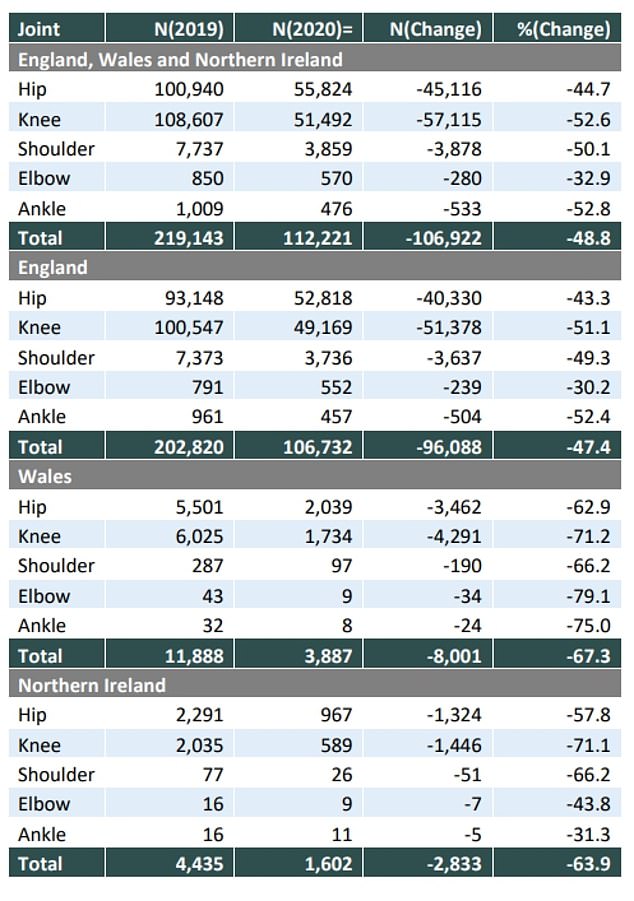 The graph shows how many hip, knee, shoulder, elbow and ankle replacements were conducted in England, Wales and Northern Ireland in 2019 compared to 2020 and the reduction in operations. The largest reduction was seen in knee replacements (52.6 per cent), followed by shoulder (50.1 per cent) and hip (44.7 per cent) replacements. Wales and Northern Ireland had the biggest drop in joint replacement surgeries, declining by 67.3 per cent and 63.9 per cent, while 47.4 per cent less operations were performed in England 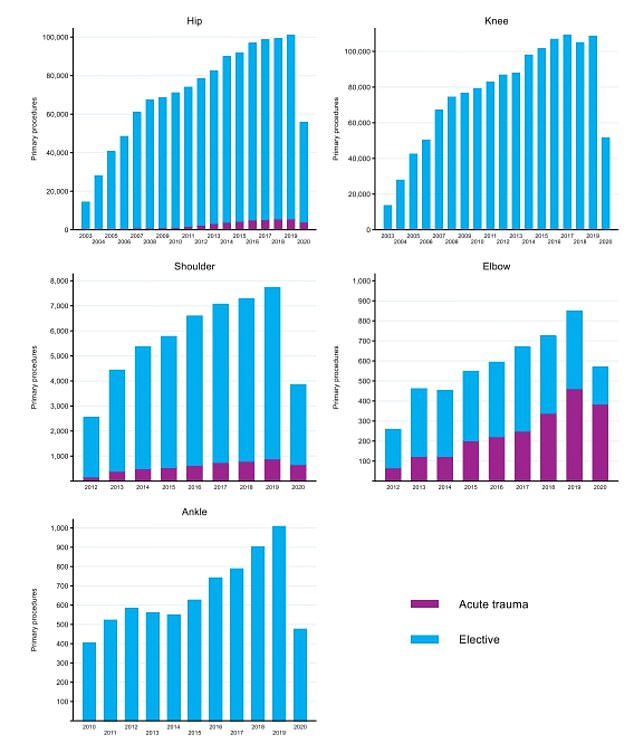 The graphs show the annual number of hip, knee, shoulder, elbow and ankle replacements performed across England, Wales and Northern Ireland. Each graph shows that the capacity for joint replacement operations has generally increased until 2020, when the number of surgeries dropped 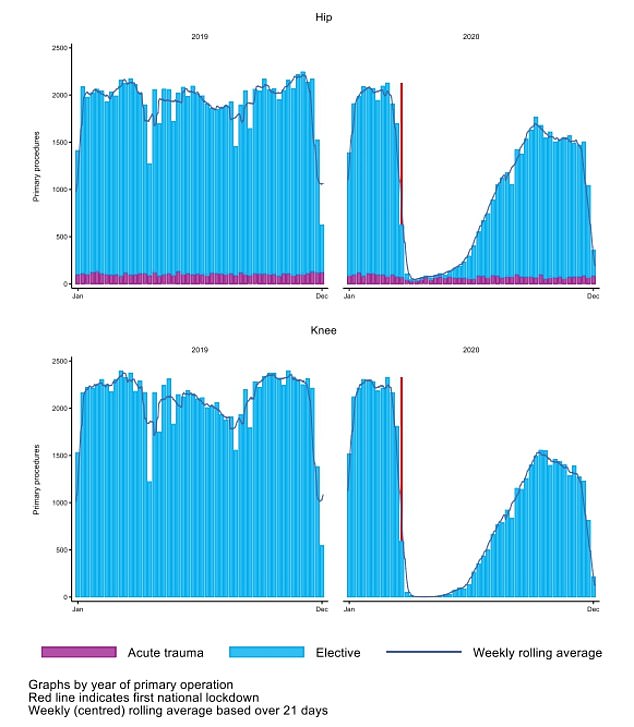 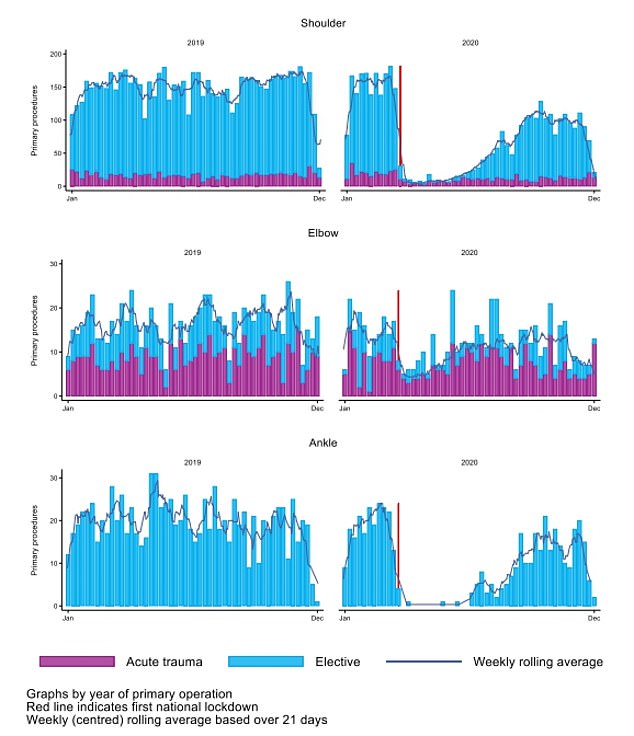 The graphs show the number of hip, knee, shoulder, elbow and ankle replacements performed across England, Wales and Northern Ireland in 2019 and 2020. The 2020 graphs show the capacity for joint replacement operations has dropped in March 2020 and did not begin to pick up until later in the summer 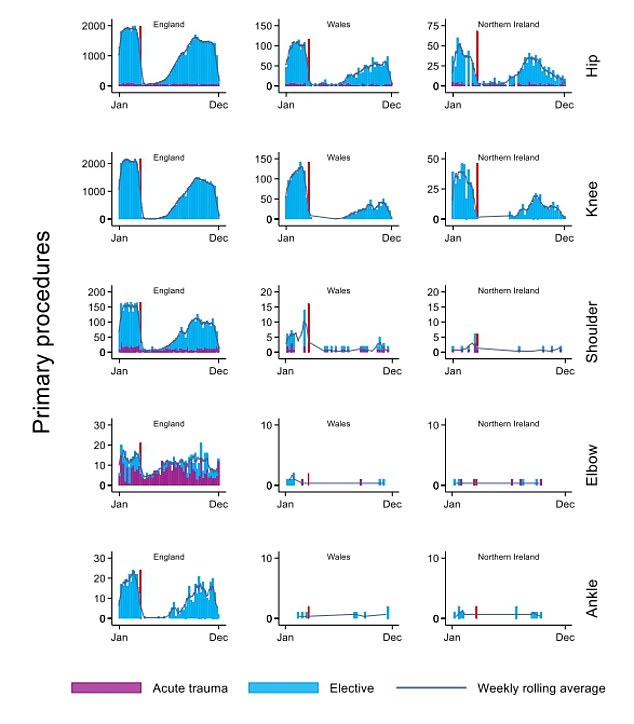 The graphs show the number of hip, knee, shoulder, elbow and ankle replacements performed across the three countries in 2020. The graphs show that England picked up the number of operations it was performing toward the end of the year to around 75 per cent of the country’s capacity before the pandemic. But Wales and Northern Ireland struggled to return to pre-pandemic levels towards the end of 2020

Every year around 200,000 Britons get hip and knee replacements, which are made of plastic, metal or ceramic — and usually last for at least 15 years.

Joint replacements are normally given to people who have arthritis, a condition that affects 10million Britons and 54million Americans.

Dr Adrian Sayers and colleagues trawled through medical records to work out how many procedures were carried out in England, Wales and Northern Ireland.

They looked at operations carried out on the NHS and in private hospitals but didn’t examine procedures in Scotland, which are kept on a separate database.

In 2019 — before Covid began spreading in Britain, 219,143 joint replacements were performed across the three nations.

The researchers insisted this nearly 50 per cent drop was not because of a sudden huge drop in patients needing care. Instead, it was because of the Covid-triggered disruption to routine healthcare.

The team also fear their estimate is ‘conservative’ because more replacements would have been performed in 2020 than in 2019 under normal circumstances.

Dr Sayers, a medical statistician, told MailOnline another 55,000 surgeries have been delayed in 2021 compared to before the pandemic so far.

He told MailOnline: ‘I’m sure this has been really difficult for patients who have been waiting for a really long time.

‘Most joint replacement surgery is transformative and takes away patients’ pain in the vast majority of cases and restores mobility.

‘This data is really important as it represent all joint replacements across the NHS and private sector and the estimated deficit doesn’t rely on estimates from waiting lists, which can be very misleading.’

Experts said Covid’s impact has ‘not been uniform’ across the three countries, with Wales and Northern Ireland hit the hardest.

In both countries, shoulder, elbow and ankle replacements were ‘effectively halted’, the researchers wrote.

The deficit in 2020 is equivalent to six months of normal activity, meaning waiting lists for the operations would be at least six months longer on the assumption that services were restored in 2021.

A ‘significant expansion’ of joint replacement services compared to 2019 levels is ‘urgently needed’ to address the backlog, the scientists said.

To tackle the backlog by 2031, the NHS could expand their pre-Covid services by 5 per cent.

But staffing these would be ‘extremely challenging’, so NHS bosses should consider asking senior doctors to delay their retirement or ask retired surgeons to return to work.

A seven-day operating week may also be needed, the team said. 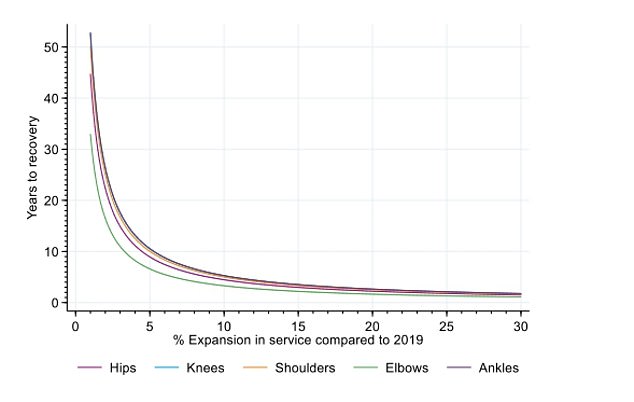 The graph shows the number of years it would take to recover from the 2020 drop in joint replacement operations if the health services increased the number of operations it carried out compared to 2019. The researchers found that an immediate 5 per cent expansion in provision would eliminate the deficit within 10 years, while a 10 per cent expansion will address the deficit in five years 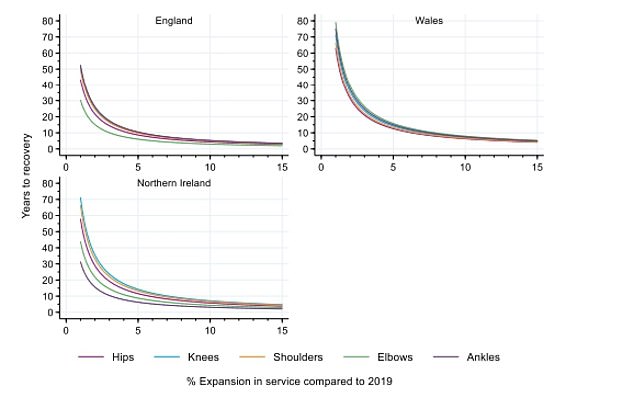 An NHS spokesperson said: ‘The number of people coming forward for care fell significantly throughout the pandemic but the NHS was there for patients with all conditions, and the message remains – people must continue to seek help if they need it.

‘The NHS recently published a plan to accelerate the delivery of operations and other services backed by a £1billion fund, and every area of the country is being asked to maximise their capacity to provide care for as many urgent and non-urgent patients as possible.’

Tracey Loftis, head of policy and public affairs at Versus Arthritis, said: ‘This study illustrates the impact that the pandemic has had – especially on people with arthritis – who are bearing the brunt of this waiting times crisis as they wait for life-changing joint replacement surgery.

‘For many this means living with symptoms that are impossible to ignore and which can have a devastating impact on many peoples’ lives.

‘It’s vitally important that steps are taken to address the backlog – especially for joint replacements – and why Versus Arthritis is calling for a six point support package to help ensure patients receive the holistic care and support they urgently need whilst waiting.’

Bob Handley, president of the British Orthopaedic Association, said: ‘Joint replacement surgery has been very severely affected by the reduction in elective operating over the last 16 months due to the pandemic.

‘These figures underline not only the importance of fully restoring services as soon as possible, but ensuring there is a sustained focus on catching-up so that patients can get this much needed care in a reasonable time.

‘To provide the necessary sustained effort to enable this surgical recovery, it is particularly important services are protected from further interruptions such as those from so-called winter pressures that have affected surgical services all too often in the past.

‘It is hard to avoid significant concern on behalf of patients at the estimates in this study of how long it could take to return to the same waiting list as before the pandemic, even more concerning is that the waiting list was already at record levels, and further sustained effort will be needed to address that underlying problem.’