Former England captain Michael Vaughan was among those fiercely critical of the decision to place the country’s white-ball team in isolation after three players and four backroom staff test positive for Covid.

News broke early on Tuesday that the whole of England’s white-ball team were forced to isolate because of a breach of Covid protocols.

A completely new England team, captained by Ben Stokes, will be forced to face Pakistan in the one-day series that starts in Cardiff on Thursday after the virus swept through the camp. 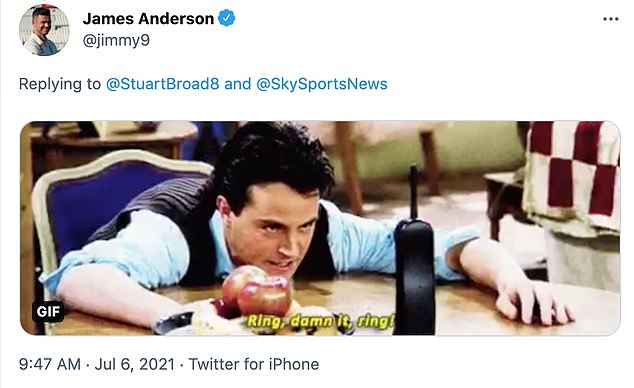 Three England players and four management staff have all tested positive for Covid after the final match against Sri Lanka at Bristol on Sunday.

It is not clear yet how the protocols were breached but an investigation will be held by England and the implications for the rest of the summer will be huge.

The whole 16-man squad and their management team, led by stand-in coach Paul Collingwood, will be forced to isolate for 10 days and will be out of the three-match one-day series.

That includes the second game which is due to be staged in front of a full house at Lord’s on Saturday.

Vaughan, who captained England in 51 Test matches during his career, was among those to question the decision, particularly given the Scottish football team did not have to isolate when Billy Gilmour tested positive last month at the Euros.

The decision caused controversy at the time when England footballers Ben Chilwell and Mason Mount were forced to isolate after close contact with Gilmour while Scotland’s squad were allowed to carry on as normal. 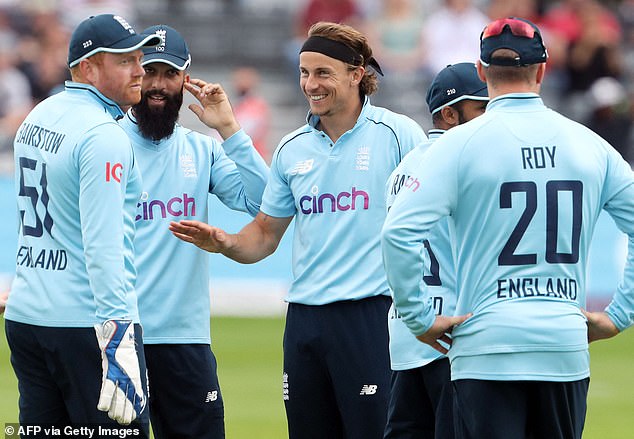 He tweeted: ‘Billy Gilmour tests positive & not one Scotland team member of staff has to isolate… England cricket team members do and the whole squad has to go!??????? VERY VERY Strange times… I guess we will or should see Alex Hales again though’.

Vaughan also posted on Instagram, reaffirming his point and calling it: ‘Bizarre’.

England bowler Stuart Broad saw the lighter side and questioned whether team-mate Jimmy Anderson, who ended his ODI career in 2015, should be drafted in.

He tweeted: ‘Still got your ODI cap @jimmy9?’ to which Anderson replied with a GIF of Friends character Chandler Bing waiting for his phone to ring, implying he could be tempted into a return.

As Sportsmail reported, England are unlikely to go back to Alex Hales, whose exile is set to continue.

But England fans were hoping the news would lead to a re-call for Hales, who was dumped from the World Cup-winning squad in 2019 after he failed a second test for drug use.

@jamiew007 tweeted: ‘If #AlexHales does not get a game now it’s fair to say he will never ever play for England again.’

@swidecricket added: ‘Alex Hales is about to find out how much England really care for him.’

Others insisted it was time for 45-year-old Darren Stevens to finally get an England call-up.

The veteran all-rounder has played for Kent since 2005 but is yet to earn international recognition for his consistent performances at county level.

@izzywestbury posted: ‘Now or never for Darren Stevens then, gents.’

Another fan commented: ‘All I want in my life is to watch a 45-year-old Darren Stevens play for England, is that too much to ask?’ 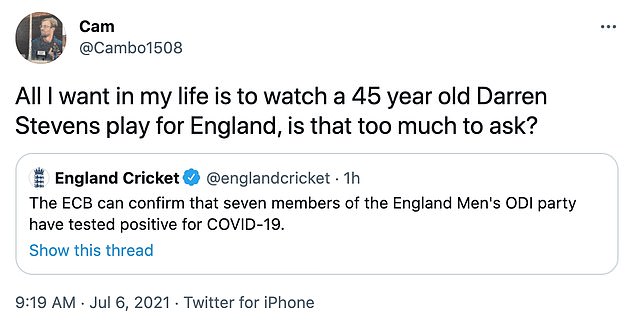 A new 50-over team will be named on Tuesday, which could give opportunities to fringe players like Joe Clarke and Ben Duckett.

It means Stokes will have to come to England’s rescue ahead of schedule following his return from a broken finger, with captain Eoin Morgan among those ruled out.

Only on Monday Morgan said Stokes would not be rushed and was almost certainly out of the white-ball international summer, with England protecting him ahead of the marquee Test series against India next month. Now all that has changed.

The first ODI match is scheduled for Cardiff this Thursday with the tour then moving on to Lord’s on Saturday and Edgbaston next Tuesday.

Three T20 internationals are then scheduled on July 16, 18 and 20 at Trent Bridge, Headingley and Old Trafford respectively.

The T20 matches form part of England’s vital preparation for the World Cup, which is set to be staged in the United Arab Emirates in October and November.