Ben Simmons has been slammed by fans for watching tennis at Wimbledon with his new girlfriend after pulling out of Australia’s Olympic Games team.

The NBA star was widely criticised after a hugely underwhelming finals series against the Atlanta Hawks where Philadelphia crashed out in Game 7 at home.

After this dismal display, the 24-year-old told Australia he would not be representing them in Tokyo, instead using the summer to ‘to focus on individual skill development’.

But just days later he was seen on Monday at the grand slam in London with Maya Jama, drawing heavy criticism from outraged fans.

‘As an Aussie I think Ben Simmons electing NOT to play for our national team under the guise of “offseason improvement” and then being seen smooching at Wimbledon is a kick in the guts for us over here,’ one person tweeted. 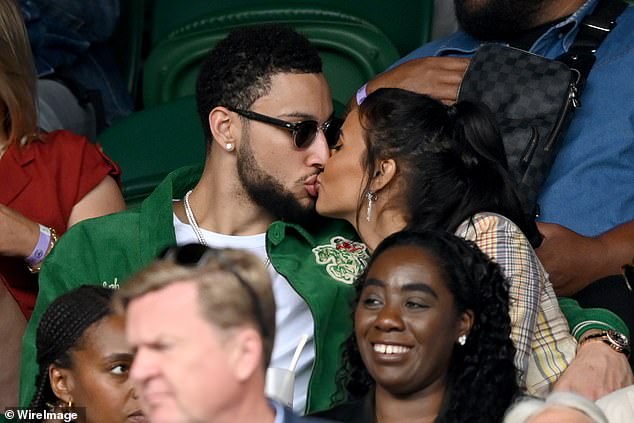 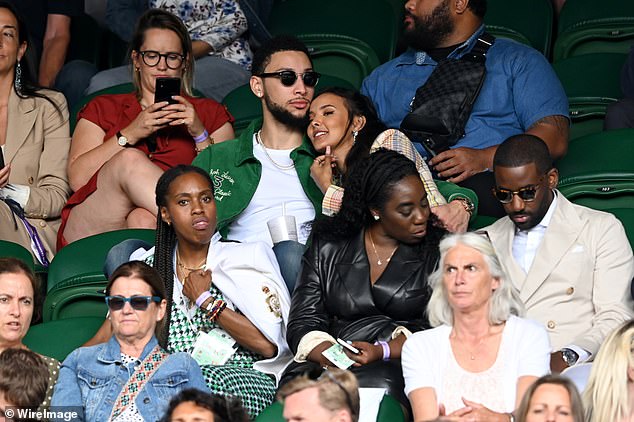 Getting cosy: The pair looked besotted as they snuggled up to one another and watched the game unfold from the stands

The 26-year-old presenter was first rumoured to be linked to Simmons when she was seen on a night out on Saturday 26 June at restaurant Sexy Fish in London.

She was the first to leave the venue, closely followed by the NBA star a few moments later.

The Boomers confirmed the 76ers star would not be present in Tokyo in a statement last week.

The decision was met with widespread disappointment from Australians, who were further angered upon seeing him at the tennis competition with his girlfriend, who has amassed more than 2.2 million Instagram followers.

‘Ben Simmons couldn’t turn up for Australia in the Olympics but rocks up to Wimbledon… what a drag,’ one person posted to social media.

‘Ben Simmons skipped the Olympics to “work on his shot” but ended up watching tennis at Wimbledon,’ another tweeted.

A third fan asked: ‘I wonder what his Boomers “teammates” think of this’ after San Antonio Spurs guard Patty Mills expressed his disappointment at the decision. 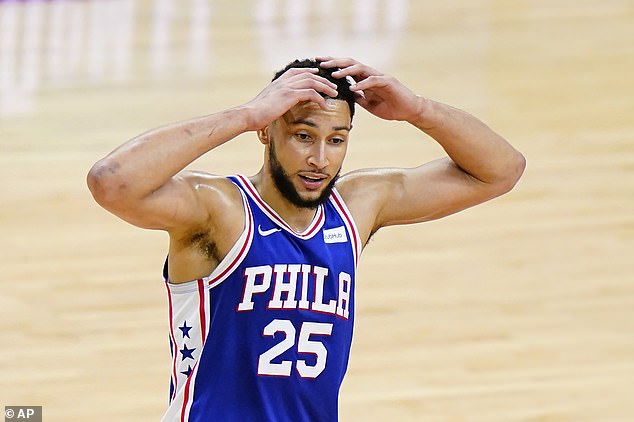 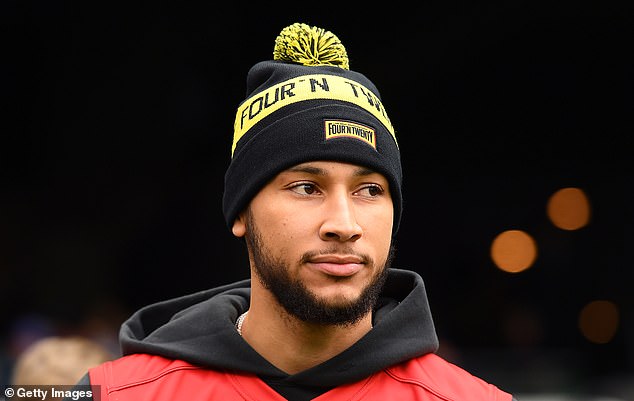 ‘I have spoken with Ben and whilst we wanted him to be a part of our team, we understand and support his decision and he has made it clear that this is something that he wants to be a part of in the future,’ head coach Brian Goorjian said.

‘It is a pretty rough time for him right now and I know it is something that he wanted to do, but the timing just hasn’t worked.

‘The best thing for everybody right now is for him to go on and develop that skill package and improve in a couple of areas for his next season in the NBA, but the Boomers are always here for him.

‘We wanted him to know that in his time of need, the culture and the guys here are behind him and support him.’

Australian fans were less supportive of Simmons’ decision, which all but ends any hopes the country had of being in medal contention at the Tokyo Games.

‘Traitor to the motherland, the Coward Ben Simmons,’ one angry supporter posted to Twitter.

‘How is this off season going to be different to previous off seasons where Ben’s ‘skill development’ has led to absolutely nothing. Cue the beach pics from the Bahamas,’ another wrote.