A concierge who was sacked for complaining about his female boss’s ‘visible camel toe’ at an exclusive apartment block has been awarded a £1,250 payout.

Lee De Zoysa was discovered away from his desk by his boss Fatma Spence at the reception of Belvedere Tower in west London’s Chelsea Harbour development – where millionaire residents include Michael Caine and Robbie Williams.

When Mr De Zoysa was hauled into a disciplinary meeting to explain his conduct he accused ‘half naked’ Ms Spence of harassing him by ‘invading his personal space’ in ‘yoga pants’ when she confronted him, an employment tribunal heard.

The concierge said that it was ‘very unprofessional’ for Ms Spence to come in wearing her leggings ‘just before Valentine’s Day’.

Sri Lankan Mr De Zoysa said he could see her ‘camel toe’ and he did not want ‘that reputation’ because he ‘is a happily married man’.

‘Camel toe’ was defined as ‘a slang expression for a woman wearing tight fitting lower garments which have the effect that the outline of their genitalia is visible’, in the tribunal. 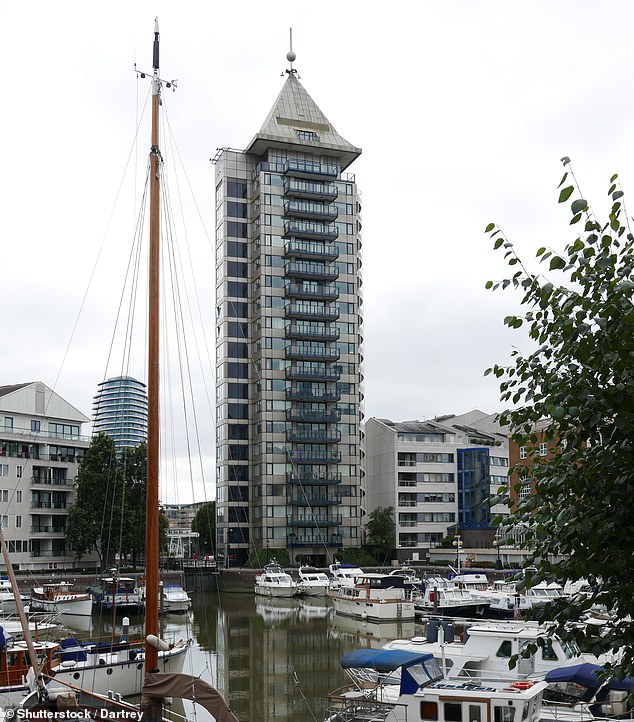 Following the meeting, Mr De Zoysa was accused by his employers of making inappropriate, derogatory and offensive comments.

He was also accused of negligence and failing to carry out his duties and was fired following disciplinary proceedings.

Mr De Zoysa then launched a tribunal claim of sexual harassment, racial discrimination, victimisation and unfair dismissal against his former employer, Rendall & Rittner, the managing agent of the building.

And he has now been awarded £1,250 after a judge – who dismissed most of his claims – ruled the investigation into his conduct had not been reasonable.

The London hearing was told that Mr De Zoysa had worked as the concierge of the Belvedere – which overlooks a marina on the banks of the River Thames – for six years.

Notable residents of the development, which offers apartments worth up to £6million, include actor Michael Caine, singer Robbie Williams and playwright Tom Stoppard.

The tribunal heard that on February 13, 2019, Ms Spence, the development manager at Chelsea Harbour, arrived just before 5am at the Belvedere.

She had planned to go to the gym before work and was wearing ‘a red jacket and yoga pants’ when she arrived at the apartment block, the panel was told.

Having misplaced her key fob she rang for the night concierge, Mr De Zoysa, who had been working since 7pm the previous evening until 7am that morning.

The tribunal heard there was no answer and five minutes later Ms Spence found her fob and entered the reception area.

No one was sat at the concierge’s desk and upon trying to enter the porter’s lodge door she found it locked, the panel was told.

Mr De Zoysa emerged from the lodge after five minutes saying he had been ‘getting changed’.

Later that morning Ms Spence emailed the concierge to question why he didn’t have his ‘phone/radio’ with him and had left his desk and computer ‘accessible’.

She also questioned why he was getting changed when there was ‘two hours before the end of your shift’.

Mr De Zoysa responded saying he had his mobile with him but hadn’t received a call from Ms Spence at the time she arrived.

After reporting his behaviour to HR manager Shirleen Migwi, Ms Spence informed Mr De Zoysa that he had been suspended pending an investigation into his conduct.

During an initial investigation meeting the following month, De Zoysa said he had only been away from his desk for 10 minutes and complained about the ‘very unprofessional’ way Ms Spence was dressed.

‘I’ve never seen a time in my life that a manager is coming into the office in an unprofessional manner, invading my personal space,’ he said. ‘This is a stitch up.’

He also said Ms Spence was ‘half naked’ and wanted to ‘build a case’ against him.

Susan Gadd – the manager who chaired the meeting – later emailed Ms Migwi telling her how ‘upset and insulted’ she was at De Zoysa’s comments.

He was sacked after a disciplinary hearing the following month. He subsequently launched tribunal proceedings against his employer.

However, the panel dismissed his claims of sexual harassment by Ms Spence ruling that her outfit of ‘a jacket and yoga pants’ was inconsistent with De Zoysa’s claim that she was ‘half naked’.

Employment Judge Richard Nicolle said: ‘We consider it very significant that in the emails immediately following the alleged sexual harassment [Mr Zoysa] made no reference to this [sexual harassment claim].

‘After his suspension he raised no complaint that he had been sexually harassed by Ms Spence.

‘At the investigation and disciplinary meetings, he referred to what he considered to be Ms Spence’s inappropriate attire rather than anything which could reasonably be construed as his being subject to sexual harassment.

‘Whilst we accept that [De Zoysa] may subjectively have found Ms Spence’s attire objectionable or unwanted, we do not consider that objectively his position was reasonable.’

Concluding, Judge Nicolle said: ‘We find it was reasonable of [Rendall & Rittner] to consider that [De Zoysa]’s use of the term “camel toe” pertaining to Ms Spence was offensive and in breach of its Dignity at Work policy.

‘We find the term to be unusual and a reasonable person, acting objectively, would be likely to consider it offensive.

‘We find [De Zoyza]’s English to be sufficient [and it] would be reasonable to believe that he would have the ability to describe her attire in a less offensive manner.’

Despite dismissing the majority of his claims, the tribunal did find that Rendall & Rittner did not conduct a ‘reasonable’ investigation.

He was also ordered to pay £720 in costs because of the way he had conducted himself over the course of the case.